Today I was planning to post post about my wonderful and creative weekend. That will have to wait.
Last night when I returned home, I received the sad news that my 95-year-old aunt, Iris, had died Sunday morning. 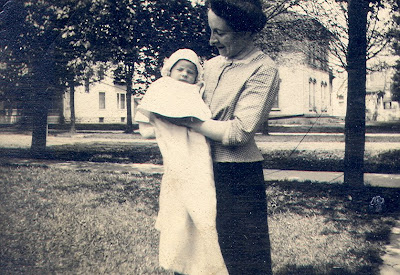 Iris was the oldest of my mom’s sisters, and the last one of her generation. After a heart attack/stroke last week, she chose to move to Hospice. However, at that time there was no reason to think that things would happen this quickly.

If you have read The Marmelade Gypsy for a long while, you might remember that back in March, when she had her birthday, I wrote a post about Iris, so some of these photos – and maybe even these memories – may be redundant. 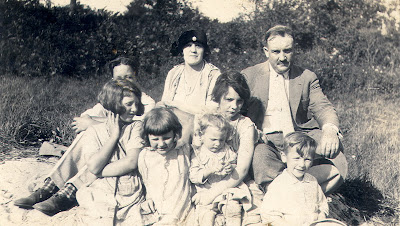 (Iris is between my grandparents, with the dark hair, in the middle holding my aunt, Gracie.)

But I did want to pay a tribute to my “other mom.”
None of the four sisters were particularly “deprived” in their life, despite growing up during the depression and World War II. Most didn’t work outside of the home after they were married. They raised their families, did volunteer work, played bridge.
Iris did too. But she also worked as one of our city’s first female insurance sales women during an era when if women worked, they were secretaries or teachers or nurses. They didn’t go into business in the 30s and 40s.
Iris had a shrewd head for business, and she new how to sell. When she and my uncle bought a sporting goods store in northern Michigan in the 1960s, she worked the floor daily. She was part of the face of the small-town community in many ways. Not a big deal these days – lots of women work full time, raise families and participate in their communities. But that was then. 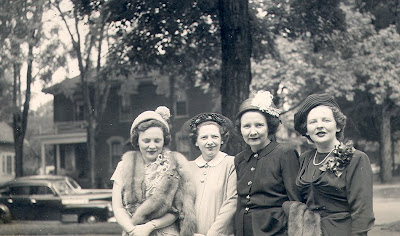 However, these are accomplishments. They are part of the fabric of her life, but only part.

She had a strong sense of family. She and her sisters had a powerful bond. It always distressed her, in many ways, that they had died so young. (Eleanor in the mid-50s, Mom and Gracie in the mid-70s.) It felt wrong to her that she was the only one left; yet she had a tough core of survival. 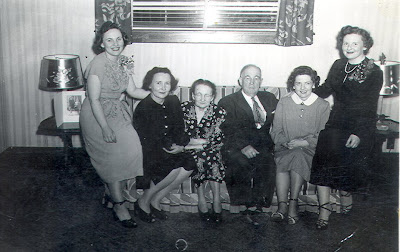 She simply adored her three children and I think the grandchildren even more. In the past decade or so, she was able to know and cuddle several great-grandchildren as well. 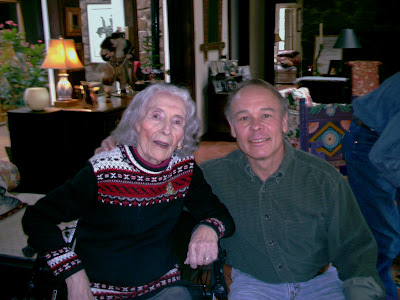 And, she loved the children of her nieces and nephews, as well. They loved her, too, as one cousin shared with me last night. Years ago, Iris spent a few days with the family and when she left, my cousin’s five year old son simply did not want to let her go. Perhaps to him, she was the fully-accredited stand-in for him own Grandma, Iris’ sister, who died long before he was born. 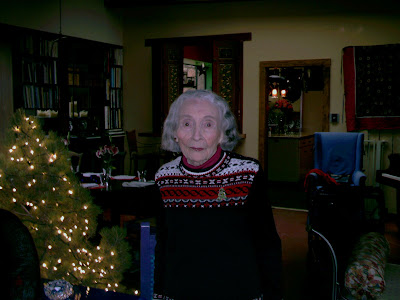 When they lived in Lansing, we spent holidays together. One time we were having a creative package-wrapping contest -- the most uniquely wrapped gift won a prize. Iris cut open a green pepper and from the top removed the seeds. She added a pair of earrings for me, wrapped in tin foil and replaced the top, tying it with a red ribbon. I think she won that year! She listened and cared about me as my mom would. I’d share teary things with her, and joyful ones. She loved cats and would listen to my Gypsy (and Stimpy) stories eagerly – and share one or two of her own.

When she finally met Rick a year-and-a-half ago, she adored him and gave me the feedback any girl would want to hear from her mom when she brought about a “really special boy.”

There wasn’t a phone conversation we had that she didn’t ask about Rick or his boys and reinforce how much she liked him. You want your parents to like your choices. She was my other mom. 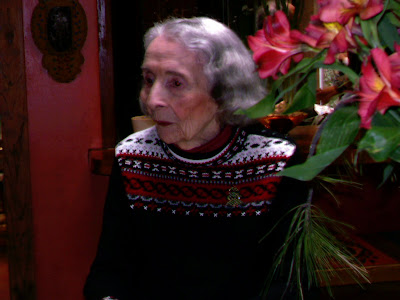 Right now, I am trying to grapple with the idea that my cousins and I are now the “older generation.” We are the elders. I keep thinking we’re still the kids – and when we get together, we still act that way!

But the fact is, the torch has passed to the next generation. It’s sobering. It’s hard for me to imagine that we are the “old farts” with our collective mishmash of ailments, sickness, foibles, frustrations, and joys.

I know that Iris died the way she wanted to. In her sleep, without pain, and ready to leave. She had expressed this to me many months before – I truly think seeing her own husband suffer for a long while, as well as her sisters and the other men in our family, really made her committed to wanting to leave without fanfare, extended pain or complication.

She did. And right now, I envision a big party with all the sisters laughing as they once did. There is good food, and most definitely a lake.

Eleanor would share her paintings, mom would show her the newest crafty things she was working on, Gracie would play “boogie on the black keys” and Iris – sweet, sentimental Iris who cried when opened almost any birthday gift or received a sweet letter or card – would shed a tear or two between the laughs. 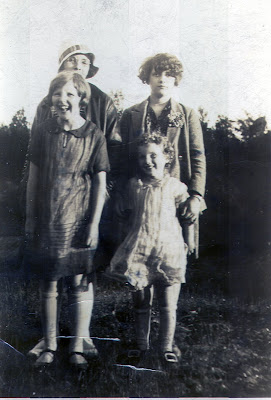 They are the sisters. Together again.

She is beautiful and I am so sorry for your loss...My Granny is 91 and she is fragile right now but we hope for the best! Those are treasured memories, I am sure that you will pass on down generation to generation. I hope you received your gift by now...it took me a little while to get it back form the author as both of us kept passing each other! Again, I am sorry for your loss...she sounded like an amazing women!

Oh Jeanie. I am so sorry about your Aunt but so glad that she went the way she wanted to go. What a wonderful tribute to her. She sounded like an amazing woman and I know she is having a blast with her sisters right now.
xoxooxoxoxoxoxooxox

I'm so sorry for your loss but it sounds as if you had a lot of good times with Aunt Iris and those memories will live forever. As I read your tribute, it brought tears to my eyes a couple of times. I lost my mom in '78 and her sister became my second mom. Then she died in '98. I know the feeling you get when you realize that you are the "older" generation now. Your aunt must have been a remarkable woman and you can feel proud to have known her.

You're in my thoughts today.

I'm so sorry to hear of your loss. Iris looks like a beautiful woman and sounds like she was quite fabulous.
Karla

I am truly sorry for your loss ...

I'm sorry for your loss. I have an aunt like that... she'll be 85 next month. I always send her flowers as she is my mom now. What a treasure the women in our lives are.

She sounds like a wonderful and special woman. I hope I age that gracefully. She was still beautiful! What a blessing to have had her in your life. I'm sorry for the sadness and the empty space that will be there.

(((Jeanie))) Hugs. I feel your lost in your beautiful tribute to a lovely lady. Hold on to the treasured memories and influences in your life. Each one is a legacy of our dearly departed loved one.

My thoughts and prayers are with you.

Thank you for the sweet card. It came in yesterday's mail.

You will be in my thoughts.

Jeanie, I so enjoyed reading about Iris. She was a beautiful and remarkable woman, and I am so sorry for your loss. I like the way you think, though. She is now together with her sisters, happy, and without pain.

Jeanie. I am sorry for your loss. This is one of the most eloquently written tributes I have ever read; Iris was obviously a wonderful person who made a great impression on many people's lives.

Hi Jeanie - I'm home from FL and just catching up on computer "stuff" while watching the closing ceremony of the Olympics, and I happened to scroll thru your blog and learned of your aunt's death. My heart goes out to you. My Dad died the same day as Iris (one month after his 90th birthday). He, too, died while in hospice. If I get a choice, that's the way I want to go - they work so hard to make people as comfortable as possible. I understand your feelings about now being the "older" generation in your family. My sisters and I are pretty much the only ones left in our family. We have one cousin on my mother's side, with whom I've reconnected in the last few years (as we both lost our parents), and one cousin on my dad's side, but that's it (except for distant cousins someplace, but we don't know who or where). While I'm sure you will miss your aunt and the special love you shared with her, I hope you will take joy in having such a great extended family.

so sorry for your loss, but what a lovely post you have written about your dear Aunt.
hugs to you during this time.