I Got a New Camera!

It's not huge, it wasn't expensive, and I know it has its limitations, but last night I picked up a nice little Olympus that fits in my pocket! The camera was $69 (on sale, half off) and two people had recommended it to me. And I have to say, anything would be better than that other thing that doesn't deserve to be called a camera.
I haven't played with it a lot, but of course I had to take a photo of The Gypsy (just because I can!). 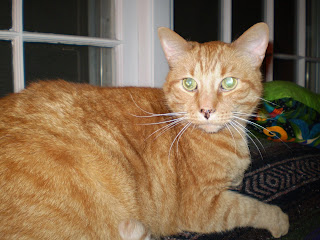 So I leave you with that on this Equinox Eve. May you wake to springtime wherever you are!
Posted by Jeanie at 5:25 PM

I am terrible with a camera, but I do love taking pictures of my doggies! I love your pics of Gypsy, too.

Have fun with the camera, and I'll be looking to see what develops :)

Congratulations!! It takes great pictures. Have a fun rest of the week.

Wow,,lucky you. I want a small camera that I can tuck into my purse. Where did you get it for that good of price? It looks like it makes great pics.
xoxooxoxoxoxoxo
Happy Spring!

There's not much better than having a camera that fits in one's pocket. Good for you and Gyp!

He's a handsome fellow and a great model as well! Love the St. Patty's pics!

well getting a new camera (pocket sized is best for spur of the moment picts) is right up there at the top of my happy list with planting a cherry tree, selecting new fish residents for the pond in avalon and kissing my little zippy. bravo and how exciting for us to know you will have photos to go along with all your posts here at the marmelade.