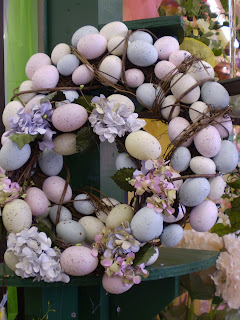 I didn’t get in over the weekend so here are some happy post-Easter wishes. I hope yours was as colorful and fun as mine!

Festivities began with egg dying on Friday night! All those colorful dyes – I wish I’d done more (though then you have to eat the eggs!). 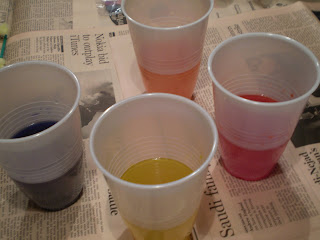 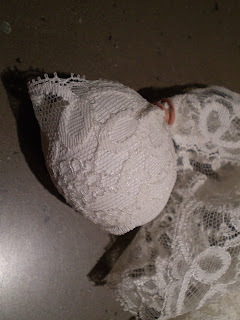 Step three -- take off the lace. The photo doesn't show quite how pretty it was! 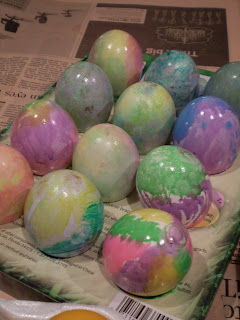 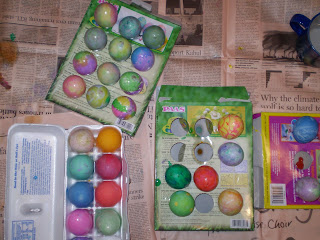 That was followed by Life of Brian and then a fairly slow road, thanks to some pretty heavy snow and icy roads.
Started out Saturday with a massage. Isn’t this a pretty sink? I felt mellow and fully relaxed to the max!

Then off to the farm market on Saturday! What colors – I went wild with my tiny new camera shooting fast and furiously! (Probably not the best thing to do on what may have been the most crowded day of the year!) 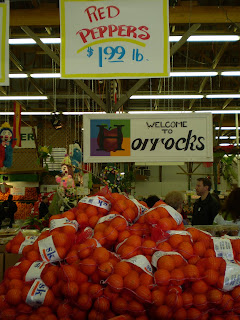 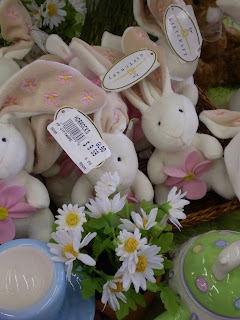 Terrific bunnies! I resisted -- but barely! 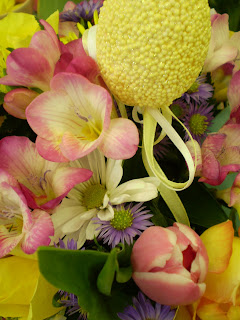 The flowers were unbelievable! 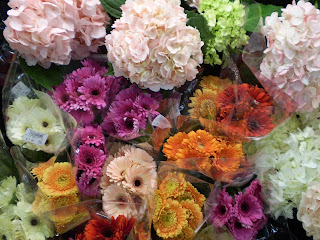 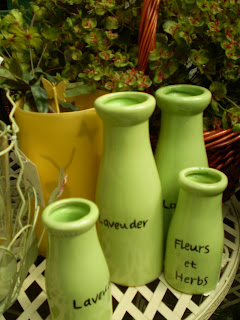 I may have to go back and buy these herb jugs!
I bought a wonderful kitchen rack from a neighbor’s moving sale – the kitchen is beginning to come together, even though I haven’t nailed anything onto the wall yet! More on that later!

Then, a terrific pesto from the extremely gorgeous basil I bought. I’ll post this recipe later during basil season, but it’s much lighter, using far less oil and it’s terrific.

Saturday night we enjoyed watching “Jesus Christ Superstar” on video. Then we switched gears and watched Michigan State beat Pitt to advance to the Sweet 16 in the NCAA. It’s always a bit of a dilemma – when we win tournaments East Lansing overcelebrates, but when we lose, they burn couches on the street.

Sunday – just fun. Spent most of the day in the kitchen and when I wasn’t there, took pictures of anything not nailed down! 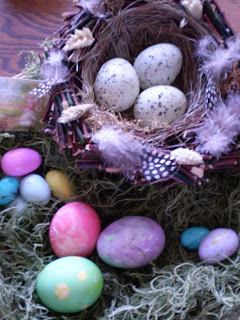 Living room centerpiece with a JoAnn's nest,
my decorated eggs and a few malt balls thrown in! 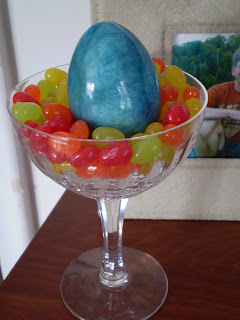 Couldn't resist using the jelly beans --
if it disrupts the arrangement, I'm less likely to eat them! 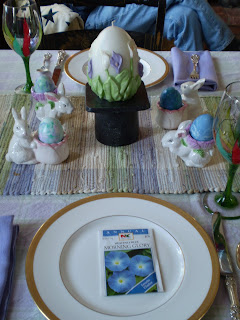 I don't know why I had party favors (seed packets)
for just Rick and me. But it's not a holiday without party favors!
It was sunny and lovely! Dinner – ham, asparagus, deviled eggs, cheesy potatoes and Ina Garten’s carrot cupcakes (As usual, I made some changes, so they weren’t exactly Ina’s, but close!). 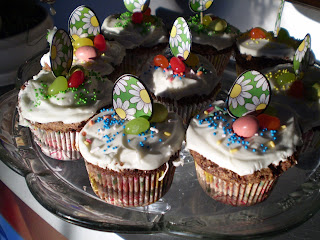 I have to say I’m way too full, even this morning. But it was a lovely way to kick my brain into spring, despite the snow!

Hope your holidays were lovely!
Posted by Jeanie at 5:06 PM

you wouldn't want me around very long, as I would have eaten those jelly beans and your decorating would have fallen all apart..hee hee

sounds like a perfect weekend to me...except for that crappy white stuff you mentioned...you know what I'm talking about...OH, you want me to spell it for you ?

SNEAUX=crappy white stuff {added for your other readers}

what a riot of color your blog photos are today! and i love the fact that you had party favors (morning glory seeds no less) for just the two of you. i mean who's wife gives them party favors of such an exciting nature!. i'm certain he was spending some of this thinking time during dinner on just where it is he would plant those beauties....

Everything looks so great! Love that idea of using the lace over the eggs when you dye them. And your dinner was almost the same as ours!

What a gorgeous post! Eye candy. You're new camera takes some great shots..with the helpful artist eye of the lady behind it. Wow!!

Your decorations are awesome! Love to explore all the wonderful details in your photos!
BTW did you know that not only Easter Sunday ist a public holiday here in Germany but also the following Monday? So what you call "Day after Easter" is still Easter for us ;-)