Back from Canada! (Part One!)

Today's autumn image is a shot of some beautiful mums, photographed at a fabulous knitting store in Grimsby, Ontario. More on that adventure in a later post! 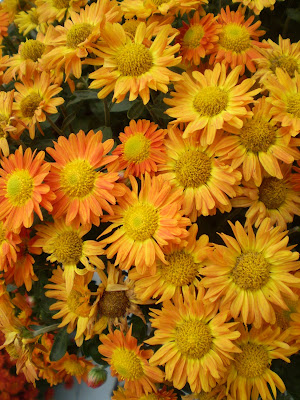 I am back from Canada -- I went on Thursday to visit my friend Suzanne -- we've known each other for four decades this year, since high school. (You do the math!) 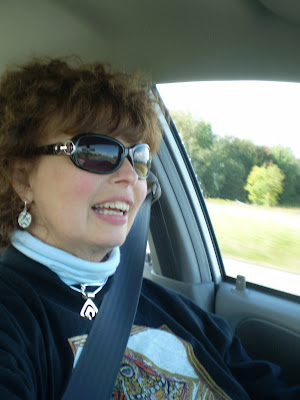 The trip was about five hours and very uneventful -- just the right thing for a road trip. Although, those passing me as I was taking pictures of me driving probably were a little concerned.

After dinner and talk, we settled in to watch the debate. (The Veep debate, although Suzanne's husband Jim reminded me that Canadians had a debate that night too, and in fact, he watched that one. The ex-pat and I watched Joe and Sarah.) 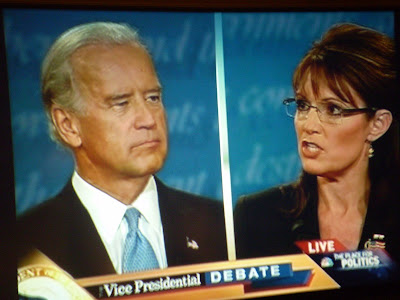 Well, knitters don't just "watch" anything -- they knit, too. (For some odd reason, I just watched.) 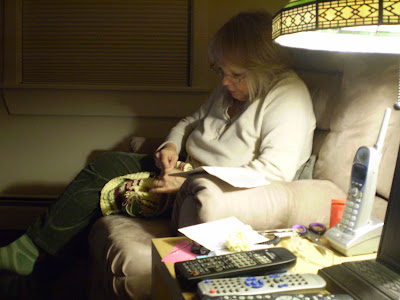 Then off to bed... for then the FUN begins! 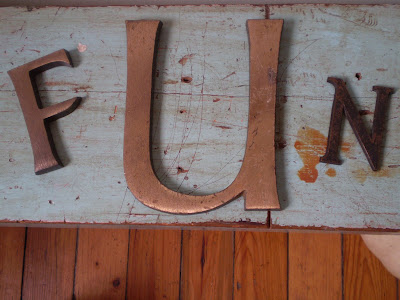 I'm still sorting through photos -- but tomorrow or later this week, more on yarning, antiquing, fabulous theatre and friendship!
Posted by Jeanie at 10:53 AM

Well you look very lovely driving in your sunglasses, very "Jackie O". I forget you are that close to Canada, within driving distance. No wonder you get tired of snow. Glad you made it back safely and look forward to seeing your pics.

I agree with Jill very lovely and very Jackie Oish!!! Your pics look great and I am so glad you made it home safely, you were missed. Can't wait to see all the fun you had!
xoxoxooxoxoxoxoxox

Welcome home. I look forward to hearing of your adventures and seeing your pictures. I'm headed to Toronto in a week and hope to get some good photos while I'm there.

If you ever come to Toronto, please let me know!

Welcome home. Looking forward to seeing the pictures and reading of your adventures. I too work the yarn when the debates are on. I can't just sit there. Or sometimes I work crosswords while listening. It will all be over soon though, thank goodness.

You've been MEME tagged at this blog:

If you go to my DO YOU REMBMBER blog, on the right at the bottom of the lists is the link to this new blog I'm just starting.

what a gorgeous photo!

Just thought I'd let you know how much fun it is to read your blog every day. Always something new and interesting. You inspire me to do the same.

Oh you don't know how thrilled I am to see this picture of you, you are beautiful, loving the pictures and wondering what your thoughts are on Ms Palin... I know who I hope becomes President so fingers crossed I get my wish...

Glad your back safe and sound! If you liked the Trixie Belden Mysteries as a child, you need to check out my book blog on Wednesdays. I'm doing Way Back Wednesday posts - reviewing the old Trixie mysteries. Bobbi's Book Nook

Welcome home sweet lady! Oh how I wish I could knit..: )

Aren't old friends the best? We always say that we all know too much about each other to ever NOT be friends. One of us could tell far too many secrets if we weren't buddies! *laugh*

Thank you for all your sweet comments! You would be SO welcome here you know! And yes! I have the Tina Brown book...I too am an Anglophile!