If my dad was still alive, he would be 93 years old today. 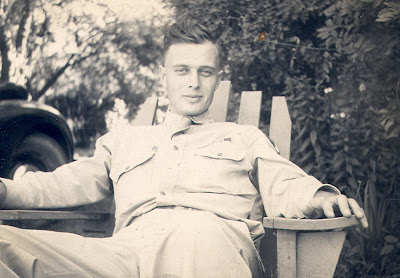 Dad died in December 1993, 16 years after my mom’s death. He never remarried – I often wish he had. And in the 10-or-so years after she died, he was in a continually declining state of health. 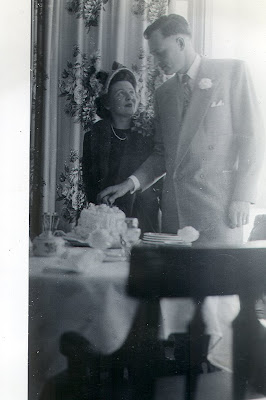 As the only child and living in the same town, I was his primary caregiver. They weren’t always easy years, as any caregiving child knows. It's difficult to forget the period where child becomes parent and parent becomes child; the demands increase as one is trying hard to carve out their life and identity. I remember being very tired for a very long time.

And terribly frightened after he died – suddenly, I didn’t have excuses anymore. If I stayed in the same town, it couldn’t be because of dad anymore. There wasn’t the financial safety net I knew was there, though I tried not to use or abuse it.

I don’t like thinking about that part so much. The happiest times were those when I was a kid and young adult, when dad was healthy and we were a family. 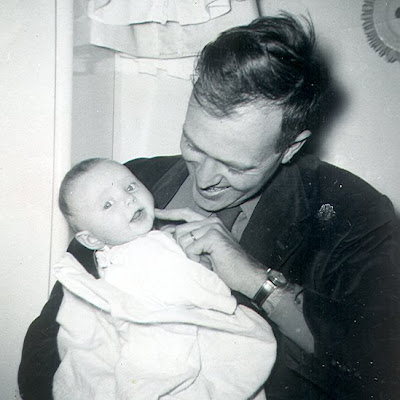 He taught me his ham radio when I was a child – I knew Morse code before I could write, though it’s all forgotten now.

And I remember fishing with him at the lake. This photo of him as a child showed the start of a lifelong love of fishing that he carried onto the trout stream and up to the lake, where he was known for both good catches (and some tall tales!) 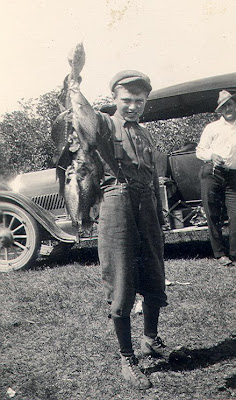 I didn't realize I was learning this at the time, but one of my dad's lessons, through fishing, was the lesson of patience -- and "tossing back." (I wish that translated into tossing out things I don't use and getting rid of clutter, but that part hasn't stuck.) 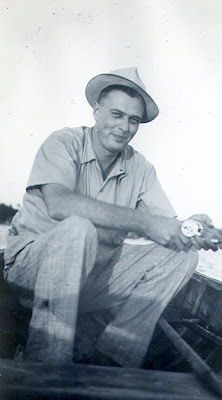 Dad was proud of his military service in India, where he did communications work (more radio! Perhaps I got the communications gene!). I love his old Army photo albums, with the sepia-toned, tiny photos of cobra charmers and exotic scenes. 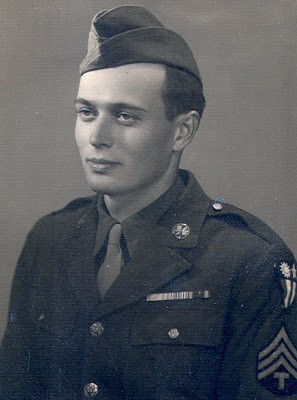 And he was a terrific (and only) child to my grandparents. They moved to a farm shortly after he was born and their lifestyle was very humble. I recall many fun times picking corn and berries, which we'd enjoy in wonderful garden feasts. He loved Grandma's custard pie, better than any other dessert she made! 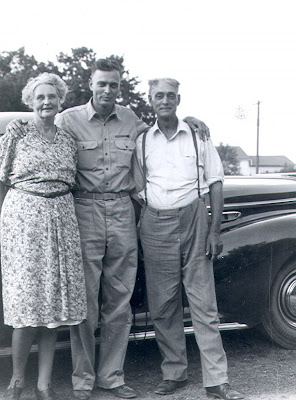 Even after my parents were married and circumstances were more lucrative, he never was big into status (as evidenced by his clothing – Ralph Lauren he was not!)

(Dad is at the left with cousin David and my uncle Marty, wearing his ever-so-stylish Christmas pants... which he wore year after year!) Someday I may make tree ornaments out of those pants!

I have fond memories of dad at the lake and the beach, traveling on vacations to Florida and to visit family. 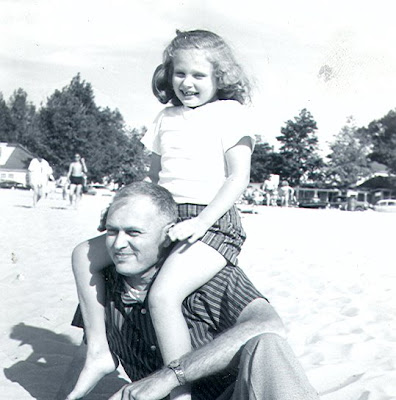 And of course there are the childhood memories of his playing the Barbie Doll board game with me (he was, after all, named Ken!). He was also a willing patient when I would play “nurse,” pretending to poke his finger with a toothpick and covering it with the dried bloody cotton ball I saved from my own visit!

My parents were great role models for me in later life. They laughed a lot; they seldom argued (at least in front of me!) and they genuinely seemed to adore each other. 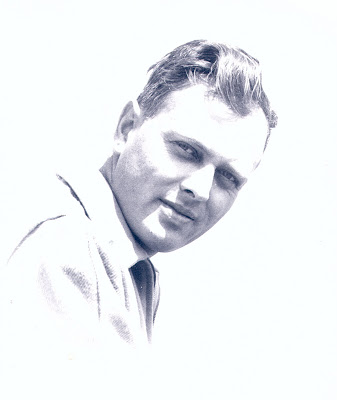 They worked well as a team in just about everything. And they enjoyed many things in common -- travel, the lake, the family. I don't think my dad ever missed a play or musical in which I appeared -- often going multiple times! 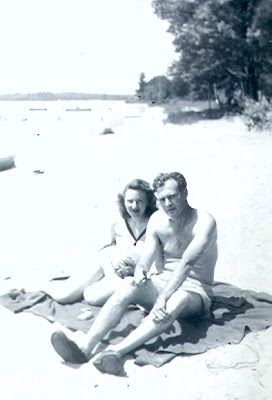 He enjoyed my friends, and they seemed to like him, too. In fact, Dad liked about everyone. I remember my cousin David once saying, "Ken never met a stranger."After mom and my aunt Grace died, our families carved out new holiday traditions, but even in the photos always seemed as though something was missing. It was. Mom and Grace. 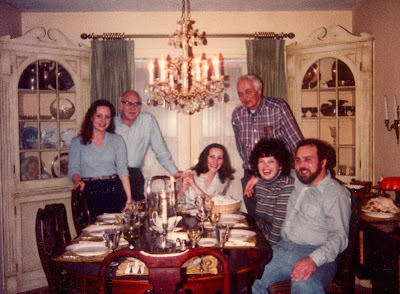 Now if were to take the same photo, more people -- Dad and Marty, would be missing, too. (Though there would be lots of new faces smiling back at the camera.)

Dad was pretty artistic, and while I probably get my creative passion from Mom, he certainly had his share. I have a couple of paintings he did and some nice photography. In fact, as a kid, he and mom had a darkroom and cameras, and were always shooting something. That was a hobby he continued until he was quite old. The camera was always at hand (even when he was watching me do pledge breaks on TV. Like I said, he was very proud of me!) I think the exposure to photography wore off on me!
About a week before my dad died, he and I shared wedding cake and listened to an audio cassette of my cousin Patty’s wedding, which he was unable to attend. That night – or shortly thereafter – he told me he felt very badly that he couldn’t leave me anything. The hospital, nursing home and medical bills in his final year were frightening and enormous, even with insurance.

Don’t you see, I told him. You gave me more than I could ever want. The values, the joys, the experiences. That’s what matters.

I still believe that.

Happy birthday, Dad!
Dad's Favorite Custard Pie (aka, Grandma's Custard Pie)
In a bowl using a fork (Grandma said this would keep the pie from being running on top), mix:

Pour into pie shell and bake at least 1 hour at 400. When pie is set in the middle (holds together, knife comes out clean), it's done.

Oh Jeanie,,that was a wonderful tribute to such a wonderful father.
It made me think about my dad too. I still miss him alot. I just Love the way you write! It always touches my heart!
xoxooxoxoxoxoxo

This is a beautifully written loving tribute to your father. You really have a great library of photos - your parents must have been great great teachers for what to take photos of, as well as how to take the photos.

This is a wonderful post Jeanie. Your love for your dad and his love for you is evident. The photos are so priceless.
Karla

I just loved seeing these photos, Jeanie. I just scanned about 50 such photos and posted them on my flickr page. I'll be doing a post eventually with several of the photos ornamenting a story.

This was a beautiful, tender portrait! And a wonderful collection of stories and photos, too. You have been very fortunate in your family.

This was such a nice remembrance. I knew him in his later years but wow, was he ever good looking in his younger years. I loved reading about your growing up years.

i read every word and loved each one. such a warm reminiscence. my dad turned 86 in september and i do wory so about him. none of us live near to him. he and my mother chose to live in he desert in heir 50's and my dad says he never wants to eave. i do hope i can help him have that. anyway jeanie...sorry to go off on my own dad. it brings up so many feelings.

your dad was a handsome man! and i can see how you look like him. you describe your love for him, all the little and big things that made him your dad so well. this is one of those posts when i thought i might be able to actually hear your voice rad out loud. he is a lucky man, a lucky soul to be celebrating his 93rd birthday here with you.
XO

Oh Jeanie, sending hugs your way. Love you Dad's baby picture. THOSE CHEEKS! What a handsome, handsome fellow. Love to you on this special day.

What a beautiful post. The photos and well written tribute was just wonderful. The photo of you as a baby is my favorite you chubby cheeks and grin and him looking at you with such love!

A lovely tribute to the dad of a wonderful friend. Jeanie, it brought tears to my eyes, as it was so very loving. What a handsome man he was and you take after him a lot. Thank you for sharing such a heartfelt story of your family. It touched me indeed. I have no doubt he'd be extremely proud of his wonderful and talented daughter. HUGS!!

Have a wonderful weekend!

From your words it was evident your Dad was a special person and you can tell how your parents haved helped make you to be the special person you are. Enjoyed seeing your photos. I want to scan the ones my Mom has so I'll have them to use and to remember.

My Dad is still alive, but he's already gone really, with Alzheimers. I really miss him, too.

OMG! I looked at the photo of your father, saw those cheekbones and thought that you are your father's daughter!

Wow, your dad what quite the hottie in his dad! Love the photos

What a wonderful tribute to your dad. My father would have been 99 this year. He died at 49. I didn't really know him. I'm going to dig out some photos of my dad. Great post I'm going to copy. :>)

You know reading about your dad brought a tear to my eye, you are so lucky my friend to have had such a close bond with your dad, wish I could say the same. He would be proud of you today as he so obviously was when he was here... and you are right the things he taught you are far more important than anything monetary.
Take care dear sweet Jeanie and be happy.
And I just had to say that your dad sure was a "looker" no wonder your mum snapped him up :-)