I'm loving this holiday weekend. I took Friday off, too, and am doing a combination of homely tasks and just good fun.
I started out with a visit to the farm market early on Friday to get flowers for home and cemetery. 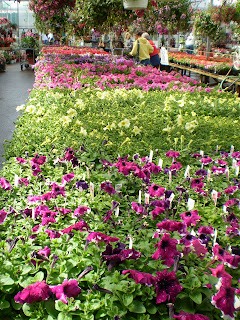 The little markers reminded me of when you see the grave markers at Arlington or in Normandy. All straight, all the same. 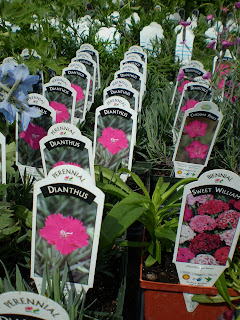 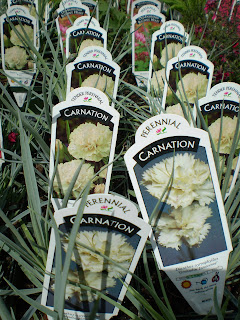 I went early, but there was a huge crowd, and no wonder! What a maze of color! 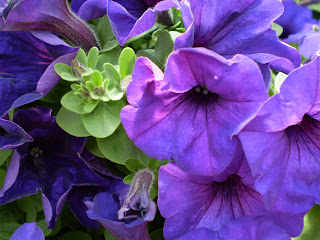 Inside, a pianist sat amidst flowers, veggies, gifts and cards, playing a grand piano! 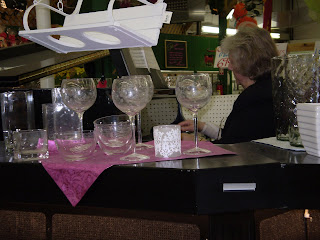 I did get in some laundry time. Gypsy helped. He seemed to be enchanted with whatever was in the pant leg.

Then he graciously tried on my pre-felted baglet, which looked like a rather jaunty cap on him.

He appeared less than amused. ("Oh, the things I DO for that woman, just for a bit of Fancy Feast and tummy rubs...") 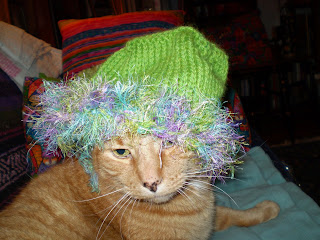 Yesterday I planted -- not done yet, but working on it! After dinner we took another walk down to the park --
Beautiful at twilight. 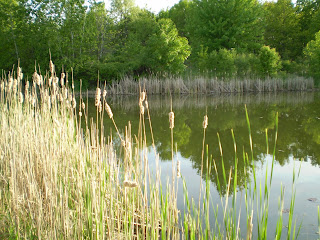 It is coming into its summer season. 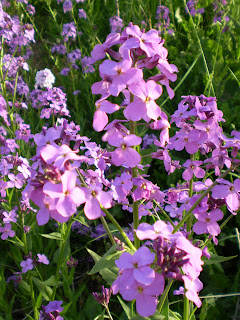 Harry the Heron was happy to pose. 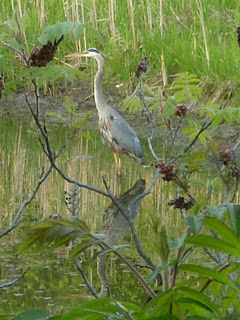 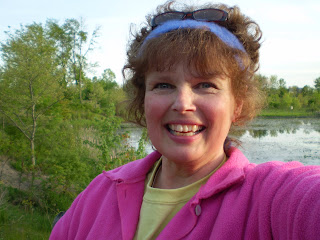 And today we hit the cemetery to plant geraniums at my family's plot.
The family plot -- wasn't that a movie? Memorial Day has always been a bit of a thing for me. As long as I can remember, I would accompany my mom when she would plant at her parents and grandparents. It was a bit of a history lesson, for some of the names in the cemetery (including R.E. Olds, who invented the Oldsmobile) were pioneers in city history and industry.

It was also a lesson in family history. First there was simply my grandfather, joined prior to my birth by his wife. Then one of the daughters, Eleanor. For a very long while, that's all that was there -- till Mom and my aunt, Grace, followed in 1977. Dad was next, then my uncle Wendell, and a year and a half ago, my uncle, Martin.

I love planting the red geraniums (mom liked red; it's what we always did) and white petunias. Then picking lilies of the valley from the hill behind the stone for the parents, aunts and uncles.
Rick accompanied me. The only family member he ever met there is Martin. I wish he'd known the others.
After that, a picnic. I made two wonderful things that I'll post here -- confetti orzo salad and cantaloupe and mint salad -- along with brownies.

We found a bench on a hill by the river overlooking the riverboat. Glorious weather, an occasional skier or powerboat. Such fun!

I got this recipe when a woman named Esther made it on a cooking show the station sponsored. I later found out that Esther got it from my friend Kate, who got the original from "Cooking Light." (Which was the first time I realized Kate and Esther knew each other!)
I don't think it much resembles the original -- I'm not sure it even resembles Esther's! So, I'm putting the only written-down version I have here (I'm not sure whose it was, Kate's, Esther's or mine) and then my changes for today. It really is the ultimate "trash can" salad -- there are so many variations you can make, based on what you have handy.

Prepare one cup of orzo (5-6 minutes). Rinse cold and add a bit of olive oil, so it doesn’t stick.

Add to taste as many fresh herbs as you like. I prefer basil, oregano, dill, rosemary, but you decide! Or, you don't have to...

Toss with red wine vinegar, olive oil, salt and pepper to taste. (Also good with lemon or lime juice in place of oil.)
OK -- the Jeanie Variations (actually, most of those are the Jeanie Variations) -- today I used (because I had them) shredded carrots, stuffed green olives, salmon, capers... as you can see, whatever you have works well! Best of all, it's a great picnic salad because it has no mayo and isn't bad at room temperature.
Cantaloupe and Mint

Make a simple syrup -- you'll need 1/4 c finished. Proportions are 1 part sugar to 1/2 part water. I used a quarter cup of water and half cup of sugar and have some left. (You can also add ginger to this if you have any.)
Cantaloupe from one melon in balls or chunks
2 T chopped candied ginger (optional, but yummy)
1 big bunch of mint, chopped
juice of one lemon
juice of one lime (optional)
Mix together and add 1/4 c. of the syrup. Best served chilled.
You could also add watermelon or other fruits as well.
Happy Day!
Posted by Jeanie at 3:01 PM

This was quite a full posting!That Gypsy is such a purrrrrrrrrrrrrrfect
model and a good sport!!
What a nice comment you made re: Judie and the tribute I posted to her!
It's always nice that caring folks such as yourself come by my blog. Thank you for your words of comfort for Judie...appreciative NG

You certainly made the most of a long weekend. What nice photography! Love the heron shot. The food looks marvelous too. I'll copy the recipes. I'm off all this next week. Got the house finished and I'm going to relax and be artsy or play with camera! Have a great day Jeanie

Gypsy is too funny.

there is so much to love about your post! your lovely visage, gypsy's fashion show, the stories of your family! and the pure happiness in your 'voice' while sharing it :) you managed to include everything necessary in this for anyone to have a great holiday. enjoy your art today jeanie! i'm so glad you did do up a post for us so that we might join you on your holiday.
xo

what a great long weekend for you....flowers at the fresh market, food, a great self portrait...what a time you're having.
thanks for sharing it with all of us !!!

What a post! Love your beautiful photos, especially the one with the heron and your self-portrait :))
Sounds like you had a wonderful weekend! Thanks for sharing :)

What a great photo of you! Enjoyed the entire post. You are right about the markers in the plants - you have a great eye!

Great photos. I love the range of subjects (Gypsy in the hat and the heron are my favorites). Going to the cemetery to visit family is a loving tradition for Memorial Day.

Wow, you had a wonderful Memorial Day week-end! Wonderful pictures and just love that Gypsy! The recipes look great too! Isn't summer the best?
xoxooxoxoxoxoxoxoxooxox