I'm sitting here at my little laptop at home, and the Marmelade Gypsy is right beside me on the desk, peering at the computer and my fingers like a vulture waiting to pounce -- which occasionally he does. He's rather captivated by the mouse -- or the cord of the mouse -- and whatever little trinket he has chased to a spot under the computer where it's stuck and he's trying desperately to paw it out. Good luck, my furry friend! Then he looks at me with those golden-green eyes, meows, and I know -- he's just waiting to hit me up for food.

Yes, the Marmelade Gypsy is on Kitty Weight Watchers. My scale may be off, but he clocked in at about 16 pounds. I think that may be high -- home scales and all (truth be told, my home scale is about seven pounds off.) Still, I think before we hit the vet, it's time to drop a few ounces. So, his precious Fancy Feast is cut back and the kitty crunchies are less rich than what they used to be. When he sits up for a treat, he just seems so desperate!

So, here we have a living, breathing, cuddling sweet boy. And on my bed, I have this. 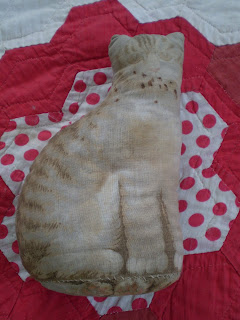 I never knew my mom's mother -- Minniewood we called her -- her first and maiden name, run together as though it is one word. "I wonder what Minniewood was like?" my cousins and I often ask. 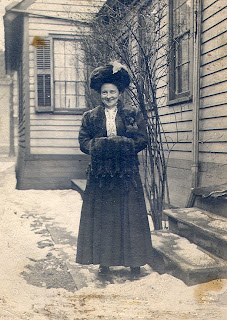 She died several months before I was born -- I think she was only around 60 or so. All the women in my family except Iris, who's 90, died young. I don't like this statistic.

Anyway, until they were married, my mom and her younger sister Grace lived at home. Grace was grandma's primary caregiver, but they all chipped in with Minniewood, who had a failing heart. Mom used to say that her mother would ask her to have tea with her quite constantly. And, she was always making these cats. 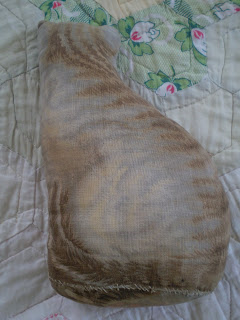 I'm sure vintage cloth enthusiasts are aware of this fabric -- lots of kitty bodies -- fronts, backs and bottoms. Minniewood would sew up cat after cat and, Mom said, line them up on the window sill of the family home, which is still not too far from where I live. (I really should get out more.)

She gave this one to my pregnant mother for me, and it's a treasure. Stained around the eyes, to be sure. And quite firmly stuffed -- not so squishy and cuddly as the Marmelade Gypsy -- or, for that matter, a Gund. But it is precious, and around this time of year -- close to the time of my mom's death and not far from Minniewood's -- I treasure it all the more.

Cats, crafts and tea. She and I would have been grand friends.

Well Mr. Marmalade does look a little bit chubby,,lol,,Kitty weight watchers,,ha! My kitty is a tortoise shell and I think they run on the small side. I have never seen ears on a cat as tiny as hers. My brother told me that 99% of tortoise shell cats are female.
Awhhh,,I Love the Minniewood Kitty,,made me smile thinking of her making those special stuffed kitties and for her grandbabie too.
Hope your having a nice day!
xoxoxoxoxooxoxoxoxoxoxoxoxoxox

My little Molly is on a bit of diet too - not enough exercise over this horrible winter :)

And now Mom has a broken foot and can't take her for walks - so sad.

I love that picture of your Grandma! She looks like she had a wonderful spirit! So glad you have a cat she made.....maybe that is why you are such a cat lover!

It is so hard to hold back on the cat treats....I am always giving in around here. We have two cats..Buddy and Pal..they are so sweet.

Well my vet put Angel on 1/4 cup dry food twice a day(no treats or cans). She never lost an ounce. Lethargy is a problem for sure. The kitty pillow is adorable I think, personally, and Minniewood's picture is even cuter. Love this post Jeannie.

i love that photo of your grandmimi. it would be hard to imagine my life without my grandmothers as part of the story. i'm sorry that you missed that but glad you have some of the memories your own mother could share. and photos. they mean a lot don't they?

that muffler...with the tails hanging down.. so like my own grandmother's things! alligator handbag, fur hat, fur coat and even a shawl kind of thingy.. and things had feathers as adornments then too! sigh. i have always thought i was meant to be born in a different time.

and slap my forehead where was i that i didn't realize that Marmelade Gypsy was the nom de plume of your cat! and i thought all this time it was you writing those blog entries. silly me :)

here i am again writing a virtual book chapter instead of a blog comment!
r

What a wonderful treasure from an amazing woman! How lucky you are to have the cat (well both of them - real and handmade). :)

What a sweet name, Minniewood. And how precious to have one of the kitties your Minniewood made and just for you. How wonderful. And of course, Mr. Gypsy is wonderful too. Tell him I didn't leave him out! xo