Artiscape, three and PTV Pick of the Week

First up, the last cool thing about Artiscape – the House of Cards. All my ATC buddies – this is for you!

I’m showing a few of my favorites, in no particular order. We weren’t allowed to detach the cards from the sleeves, so I can’t tell you who these artists are – if you are one, let me know and I’ll credit you. Meanwhile, just know that this amazing body of work represents many individuals’ artistic talents. It was worth seeing! 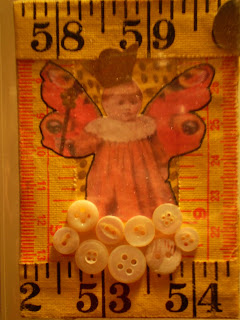 Public TV Pick of the Week
Sitting on my desk is a DVD of “My Boy Jack,” airing Sunday, April 20, on “Masterpiece” (previously “Masterpiece Theatre”) – it’s at 9 p.m. here in Michigan. I’m dying to preview it and haven’t had time, but I’m giving it my “pick of the week” because it just sounds so darned good!

Think “Harry Potter Goes to War.” World War I, that is. Daniel Radcliffe, everyone’s favorite boy magician, plays a more worldly character in this adaptation of David Haig’s play about Rudyard Kipling and his son, Jack, who enlists for “The Great War” and ends up missing.

Haig (from “Four Weddings and a Funeral”) wrote the drama, based on his play, and plays Kipling. Kim Cattrall (Samantha of “Sex in the City”) plays Kipling’s wife, Carrie. Radcliffe is Kipling’s son, a young man obsessed with serving his country and escaping from the shadow of his famous father.

Underage and hopelessly myopic at the outbreak of World War I in 1914, Jack desperately wants to join the fight, which is unfolding with unspeakable horror in France — although this awful truth has not yet sunk in with the patriotic 17-year-old.

In the press release Haig said “It is impossible to overemphasize [Kipling’s] status in 1914. He was the voice of the empire, he had the ear of the king and the prime minister, and was as globally popular (and, incidentally, as wealthy) as J. K. Rowling is today.”

A hard-line proponent of the war, Kipling passed on this same sense of unquestioned duty to his son. As events unfold, Jack twice fails his induction eye exam, and Kipling ultimately uses his friendship with a celebrated field marshal to get the boy an officer’s commission in the Irish Guards, an infantry unit destined for the front lines. Kipling even gives permission for Jack to go into combat before he’s 18.

But then Jack is part of the infamous Battle of Loos in the fall of 1915, which costs more than 20,000 British lives. A few days later, a telegram arrives at the Kipling estate. Jack is missing, presumed injured.

Kipling never recovered his childlike delight in storytelling. The author of The Jungle Book and Kim turned to more somber works such as this poem, written shortly after Jack’s disappearance, which begins:

Have you news of my boy Jack?
Not this tide.
When d’you think that he’ll come back?
Not with this wind blowing, and this tide.
Posted by Jeanie at 4:15 PM

Hi-
Sorry if I missed a thread but do you get the Masterpiece shows before they air? I have my DVR set to record My boy Jack and Cranford-big fan of the book and Dame Judi.
That wall of cards is unbelievable. So great you took pics to share.
k

Of course Cats would be amongst your favorite at the show. These last few posts tell me you just had the time of your life there. I'm really happy for you.

So glad you had a great time at Artiscape!! Events like that are so mind-boggling fun and stimulating it makes one heart race!!!!!!!

your review for your pick is fantastic jeanie! it makes me want to see it forthwith although i can't because we do not have TV here in Avalon. i am sure i could at some point get it from the library though. i will place this on my "must see" list. that wall....goodness...what an amazing collection all placed side by side. i am assuming here somewhere too...?
XOX

Oh my, what a small world! I took an ATC class of Lisa's who started the House of Cards! It was my first ever ATC. I get a lot of supplies from her family's biz, European Papers. How fun!!! I'm going to have to check out the new MPT stuff. I always keep an eye open for goodies! Thanks for the head's up!

I would Love to see all of those ATCS! You just had a great time there didn't you? I am going to try to watch that show tomorrow night. Thanks for letting me know about it. Hope your having a fun week-end.
xooxoxoxooxoxoxoxoxo

Oh...look at all those ATCs. I like the kitty ones best too..we are birds of a feather that way.

I usually watch Masterpiece every Sunday. I didn't care for Room With a View, but I sure liked the Complete Jane Austen series. I missed Mansfield Park so I may have to rent it from Netflix.

The ATC wall is soooo cool !!!
Wouldn't that be fun to do inside on your own studio wall ?

Wonderful! Thanks for these photos. xo