I'm Back! Artiscape, Part One

Yes, I had a wonderful time! Yes, it was amazing! Yes, I learned so very much! Yes, I want to go back. (Even though Kate and I left VERY early!)

First of all, as those of you who have attended any retreat or event of any discipline know, being around like-minded people (especially creative ones!) is so energizing. To see so much creativity in one place is almost overwhelming at times!

One of the first places we headed was to the marketplace. Over the course of that and the subsequent artisans fair, I did rather buy a lot! (Not the least of which was Diane Maurer-Mathison's newest book; I had taken her paper marbeling class two years ago at Artiscape -- this book is on collage. 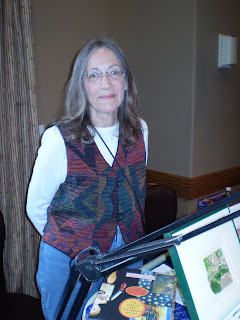 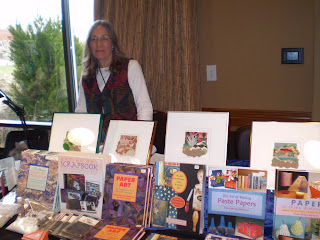 The venders were excellent, with very good and often unusual supplies. Things you either have to find at a show like this or online. I'll be posting many projects in the future!

Then off to the first of my two classes -- "raised and embossed surfaces." It was taught by Wanda Montgomery. 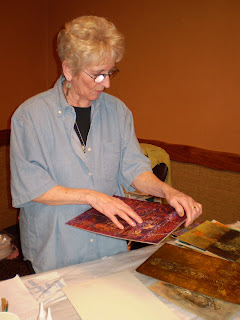 We got to play with different painting techniques, using gesso, targel, mediums, alcohol and lots of paint! Lots of demos, followed by practice. 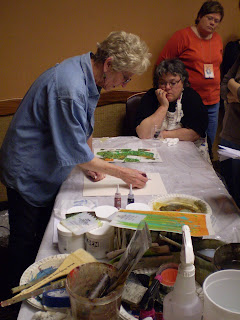 We made two pieces. I'm rather fun of the "sun" piece, though it needs a bit more of a focal point. 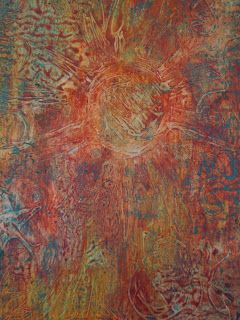 The other doesn't do much for me, but when you crop it out, it turns out rather nicely! 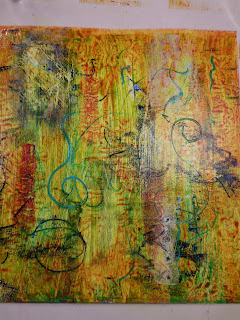 (Do you see a tortured face in the upper left corner? Some do, some don't. It wasn't planned and is even a bit less now that I've messed with it some. I believe it was Freudian, based on my challenges with some of the paint!)

Even our "junk sheets" for wiping our texture scrapers off turned out respectably (at right). (Yes, it needs stuff -- like a focal point, but hey -- it was a palatte!) 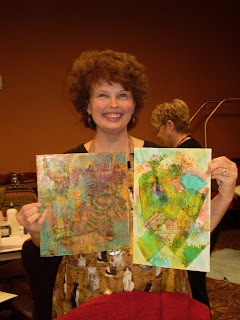 Kate's was VERY cool -- I loved her colors -- she knows what to mix together to get the right look! 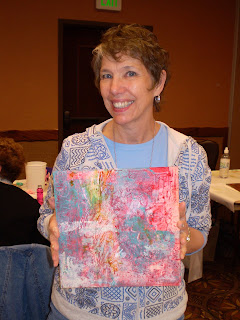 Making new friends is great, too! In my surfaces class, I met a woman named Sue who was from Kalamazoo. I asked if she knew Joanne from ad libitum, whom I knew was attending and I was eager to meet. She did indeed! We sat together at the banquet, along with another Kazoo artist, Dell [sp?], along with Nancy from Kentucky and several others on the other side of the table!
The dinner had a Casablanca theme and the movie was playing on large overhead screens! 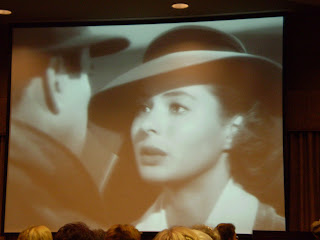 The evening included a silent auction (I bought several things -- I'll post them, when I bring in the names of the women who made them so credit can be given!), a lovely dinner and the movie "Mark of the Maker," which was about how Twinrocker Handmade Papers revived the art of handmade papermaking in the U.S. Kathryn Clark of Twinrocker introduced the film. (I bought one of her papermaking contraptions which looks a bit like a self-cleaning litterbox, but will be much cleaner!)

(These are some of Kathryn's papers from the Marketplace.) 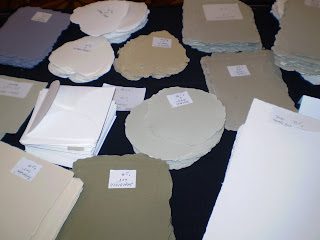 We also had a grand dessert buffet! We should have just had a piece of pie at the table. You can get into a lot of trouble with a dessert buffet.

After that was a "cookie exchange-like" trading session. Everyone put their trades out on a long table. If you brought 10, you picked 10. I brought a lot and got some great stuff! Beautiful cards, lovely embellishments, some jewelry, charms and buttons. I loved Kate's paper backgrounds, which included a packet of about 12 graphics one can use for ATC making! 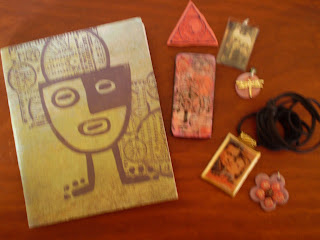 Some of my items nabbed in the trades! 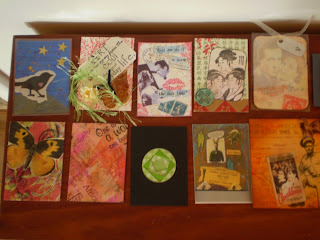 Next time I'll post on "Transparent Collage," and show you my silent auction high bids!
One other thing -- if you visit Beth's blog (Lasting Impressions From the HeART), stop by and send her good vibes for her mom, Lottie, who is in our ATC group. She's had some serious health issues this week.
Posted by Jeanie at 5:53 PM

Email ThisBlogThis!Share to TwitterShare to FacebookShare to Pinterest
Labels: Artiscape

Oh!!! I am SO SO envious! They just don't have that sort of thing around here. Yay!! Looks like you had one great time! (I can see by the bright smile on your face!) Welcome back. Missed you..and thank you for the sweet comments on my blog ((Jeanie))

It really was easy to spend money at the two vendor events, wasn't it. It was great meeting you and I love what you and Kate made in the texture class. I look forward to reading your next posts.

looks like you had a grand time and learned quite a bit..and made some new friends! wow.what fun!
love the little art cards you got too.
thanks for stopping by, always enjoy your visits.
hope you have a great week.
Tina

Wow, it looks like such fun! And Love your Sun piece! I think it is perfect as it is!
Sandra Evertson

What a fun time! I love your pieces. Beth and Lottie are in my prayers.
xoxo

I'm envious, too. So far I've heard of nothing like this happening anywhere near here(northern Alabama). I do hope to make it to some art event like this someday. Your work is beautiful, BTW, and it looks like you had a grand time!

i'm with sandra on your sun piece ! i loved it the moment i saw it...before i read even one word of your post :) it speaks for itself. i;m sure it was so much fun to be with all those other women who are as excited and thrilled as you by the experience. it is infectious isn't it?
XOXOXOXOXO i'll be looking for more as you blog the week away.

Oh Jeanie it looks like you just had such a great time, and all the people look so radiant and happy to be there. What fun. I bet you go next time too. Ya think.

I am so glad you had such a great time.
Love and hugs
Jeanne

You really got some neat things in your trades! What a fun time,,I so wish I had been there. Maybe next year, huh?
Thanks for the sweet comment on Mom.
xoxooxoxoxoxoxoxoxoox