The last stop on our vacation last spring was London. 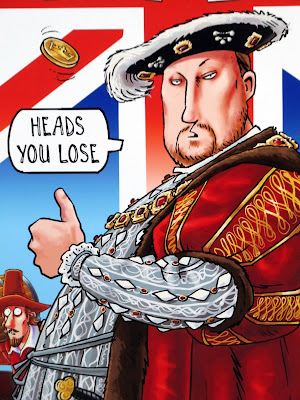 It's a spot I've been before --  back in 1973 when I visited with my mom. (It was a memorable visit then, made all the more so by the fact that her cancer appeared not long after and it was the last of our long trips together.) Rick and I had about 36 hours in this large, vibrant city -- not enough! 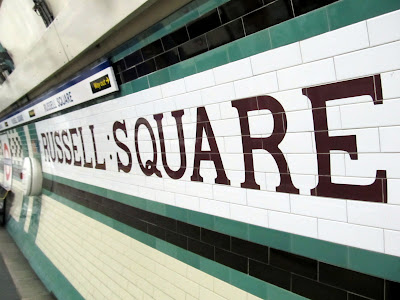 So, we landed and hopped on the tube, which took us to Russell Square. Our hotel was a few blocks away and as soon as we checked in and left our bags, we were back out, headed to the half-price tickets booth. 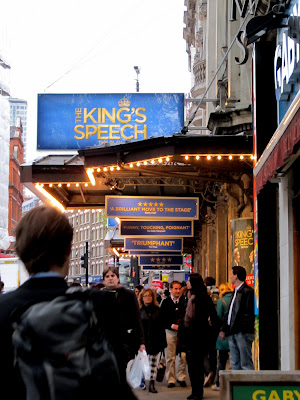 Our choice for theatre as "The King's Speech." I loved the movie and wanted to see how it was performed on stage. I wasn't disappointed.It was every bit as terrific on stage as on screen (albeit without Colin Firth!) 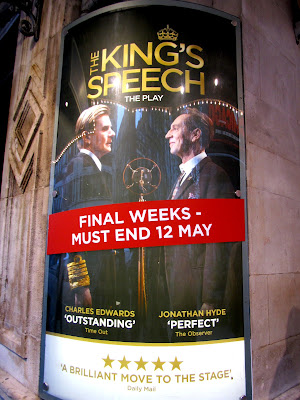 From the minute I entered the famed Wyndham Theatre, I had a smile on my face! 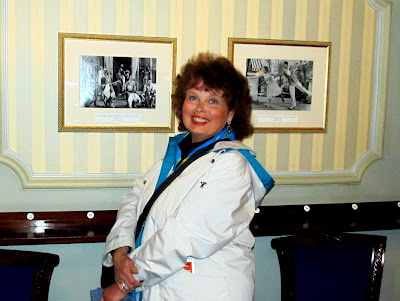 The theatre, small but grand, was where the original "The Boyfriend" had played. Julie Andrews came to prominence in that musical. 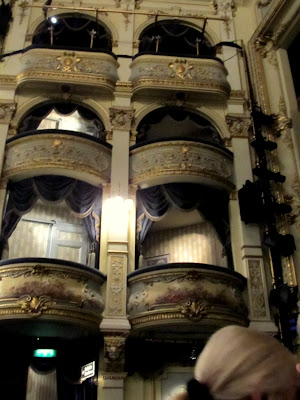 The next morning it was -- you guessed it -- rainy! But neither the rain nor my fever stopped us from enjoying a delicious breakfast at our hotel and hopping the tube. This time we ended up at Buckingham Palace, just in time for the Changing of the Guard. 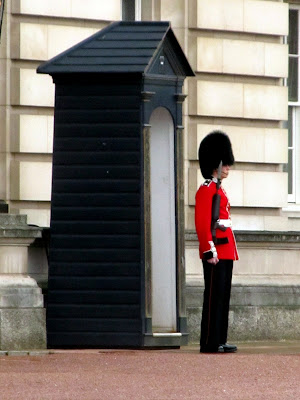 I had never seen this magnificent ceremony which lasts a rather long while. 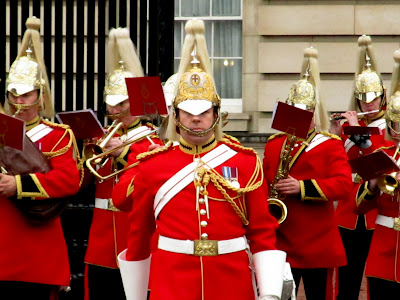 Somehow or other we had great seats -- or rather, great sidewalk, with a good view of the troops entering the palace gates... 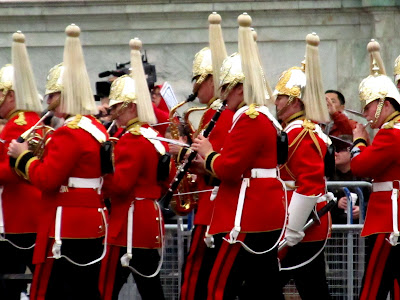 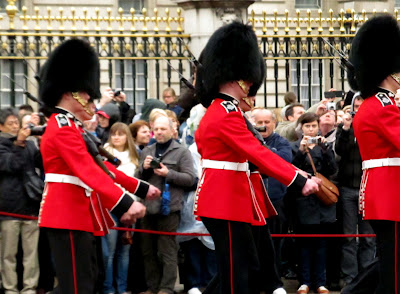 And yes, we could even see a bit inside. 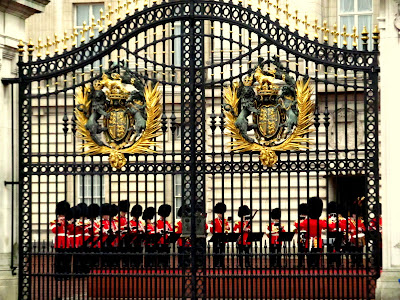 I shouldn't have been surprised at the size of the palace gates, or their massive crests. I'd seen seen them before in more royal weddings than I can remember. 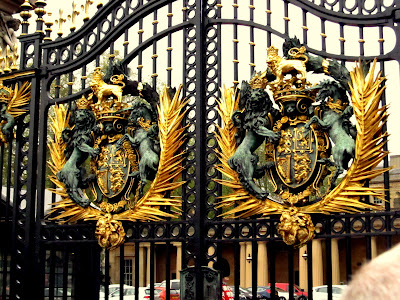 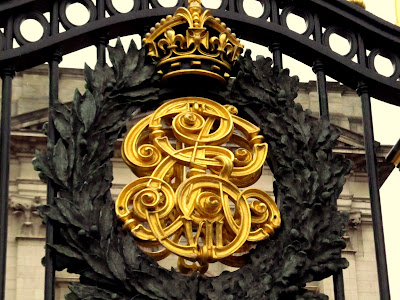 There was a huge crowd despite the weather and the bobbies, or policemen, were kind and helpful and oh, so polite! 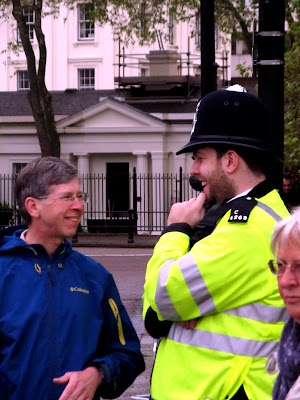 After a bit we crossed the streets to stand on the steps of the Victoria Memorial. 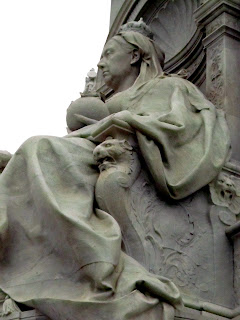 This was about as close as I got to the balcony of Buck House! 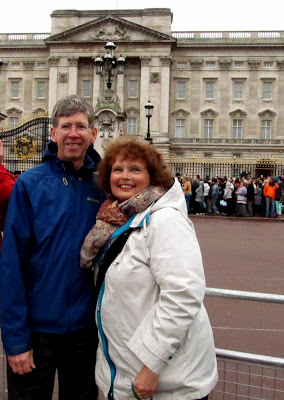 We meandered through St. James Park, which was just lovely. 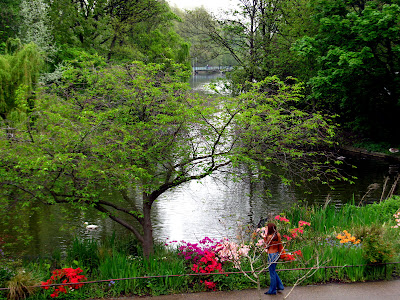 It was early spring and despite the rain and drizzle, the birds were present and rather comfortable with people. 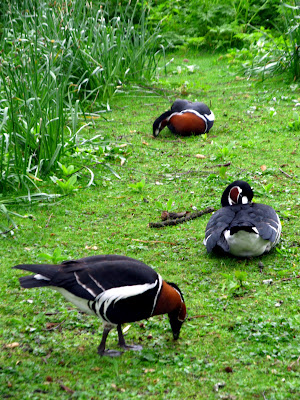 Our destination was two-fold. First, the hunt for a pub where we could enjoy lunch! 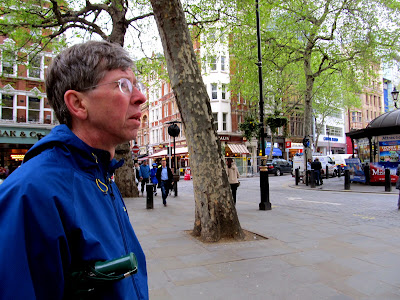 Then, it was off to see the Houses of Parliament and Big Ben. 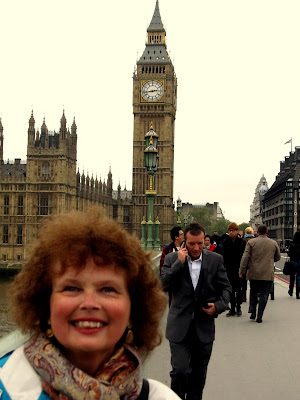 For whatever reason, I got a big kick out of walking across the river and back. It was a view seen from the air in one of my favorite British television dramas, the House of Cards trilogy. 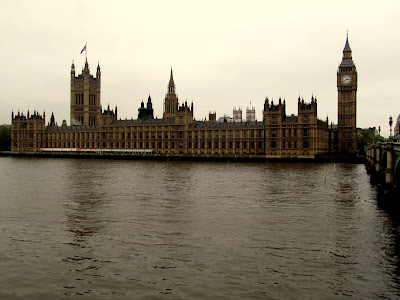 I would have loved to enter the gates. They seemed rather secure, though. 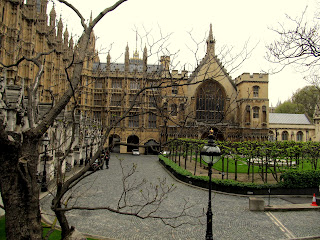 Even with the cloudy skies, it seemed rather bright and beautiful. I will never forget it. 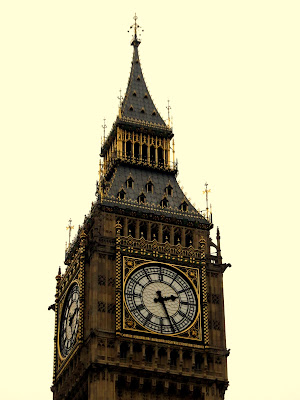 And finally, we ended up doing the one thing where we couldn't take photos but perhaps was the most memorable experience of the vacation -- Evensong in Westminster Abbey. But more on that next time!
Posted by Jeanie at 8:26 AM

Beautiful photos. Sorry to hear you had a fever but you look very happy.

Oh, Jeanie! You know what a soft spot I have in my heart for London, so I was right there with you during this post...*sigh*... LOVED seeing about your short stay in the city. I can't imagine just 36 hours in London...LOL... But it sounds like you crammed in a lot! We love the English, they are such friendly people, polite, and fun too. Evensong in Westminster Abbey really is something special. We missed it that last time we were there, in September. Hope to do that again! :o) LOVE to see you & Rick happy in London ((HUGS))

Ohhh hello you. Finally you're in the pictures too. Great seeing you.
Looking swell and all happy faced.
Smiles back at ya my friend.

London...I love the place. Thanks for bringing up memories I had there with my hubby 17 years ago. Hmmmm.
Bye from a drizzly day Dagmar

That is just about the length of time we had on our one and only visit to London and the reason I want to go back. Evensong in Westminster Abbey would be amazing, I am sure of that. You did indeed make the most of your time there, but sorry you had a fever and the rain.

You look feverish! This is a great way for a homebody like me to travel - just sitting back reading your prose and enjoying the pix.

You sure packed a lot in in a short time. I loved seeing these pictures and I also love walking across that bridge over the Thames.
Ever time I think about a trip London is the first place I think of. I know I should go some places I've never been, but I just love time in London.

I love how you are just glowing in all of the photos you share of yourself from this trip! That is so cool that you saw The King's Speech! I am glad it did not disappoint. I loved that movie and would love to see a live production of it!

My first trip outside of the US was a week long trip to London to visit a friend that was studying abroad. She lived close to Notting Hill in a cute little neighborhood. I had the best time there and that is when I caught my travel bug!

I love England. I lived in Oxford for a little bit in one of those study abroad programs. Best time of my life!!!

i just love traveling
with you guys....you DO
take us to the most scrumptious
places and always with such
a grand view!
thanks for the yummy share,
Jennifer

I really enjoyed your photos and memories...thanks for sharing!

Ah - now you're talking my favorite memories! I've been to London three times, all in association with my time in Liberia. Once, I spent nearly two weeks there! Even without the internet to help planning, I managed a few lovely things - including a self-directed tour of Christopher Wren's parish churches. The man could do windows, "simple" and light.

You look fairly glowing in your photos - sure do hope it was more happiness than fever! Thanks so much for sharing the wonderful photos and stirring my own memories!

London is one of the places on my wish to see list....so full of history, pomp and circumstance. Love the cartoon at the beginning of your post! made me lol.

Jeanie, you've totally re-ignited my love of London! I've only been there once on a work assignment (so didn't have much time to sight-see) but have always wanted to go back. Thanks for the virtual trip back in the meantime! You and Rick take the best pictures!!

Thanks for another fun adventure. London would be one place I'd love to visit but since I don't fly this is the only way I'll see it. You always have such wonderful photos.

Thanks for another virtual tour, Jeanie. As always, these are beautiful photos. As a recent birder, I'm curious to know what species those birds (ducks?) are. And, oh, The King's Speech... what an experience it must have been!

Such a delight! What a marvelous trip.

What a perfect place to see that movie!
Lovely photos btw!
Sandra

I'm catching up as you can see, Jeanie. You went to the movies without me?!?! teehee Would you believe I have not seen The King's Speech yet? My son said it was great. What a perfect place to enjoy it too. What a perfect trip.
Marcia