Yes. It's the ultimate Netherlands experience. 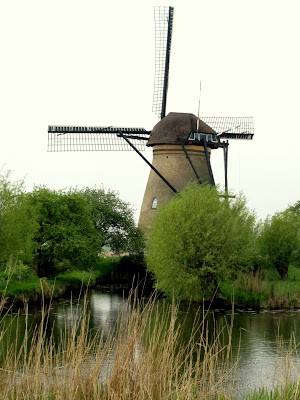 You can't go to the Netherlands and not see a windmill. It just isn't done! 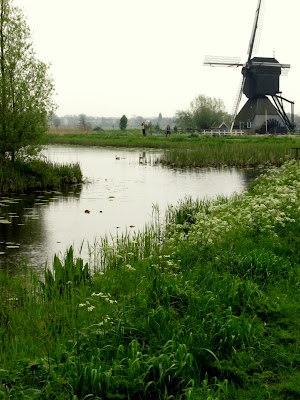 Today there are more than 1,000 windmills in the Netherlands, but the Dutch village of Kinderdijk is credited with having the most. 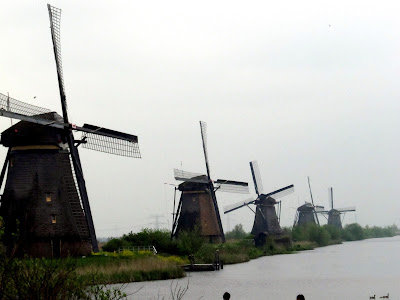 The windmills we would see here -- 19 of them -- were built around 1740 or before. They are well preserved today. 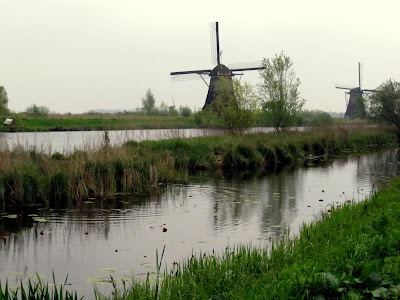 I learned that the windmills can manage water or grain. Those in Kinderdijk manage water. 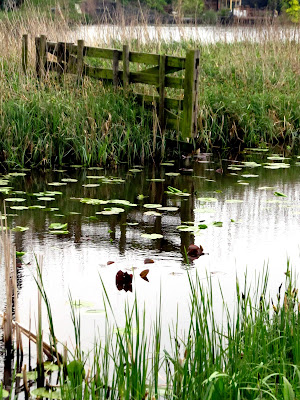 And there is a lot of it. The wetlands were simply stunning on a gray, overcast morning. 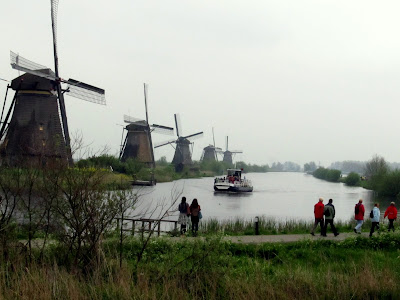 We saw plenty of local inhabitants, too. 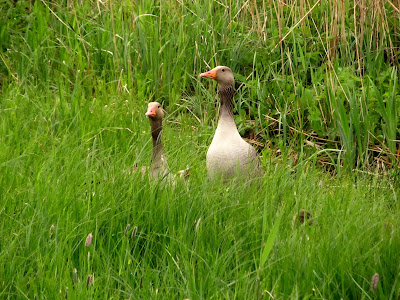 And some were very young! 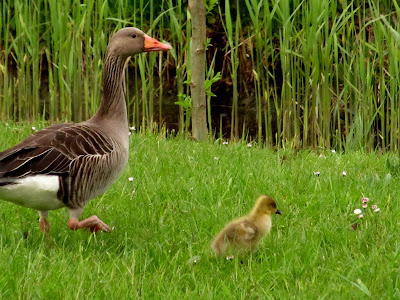 The windmills of Kinderdijk have been considered a UNESCO World Heritage site since 1997. Their literature states that the construction of the hydraulic works for the drainage of land...began in the Middle Ages and have continued without interruption. 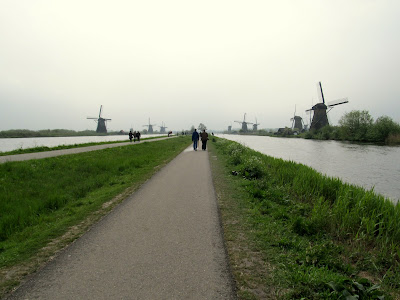 So, here's a quiz for you. Why does every windmill have two doors? 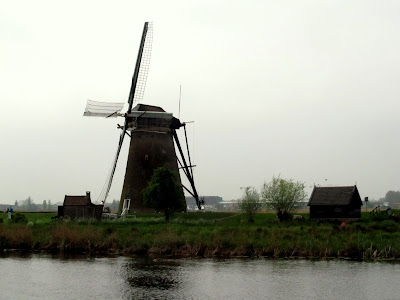 The answer makes a lot of sense. Blades always face the wind and the wind can vary, so if the blades run in front of the door, it's rather dangerous. Consequently, using the back door is a safer bet. 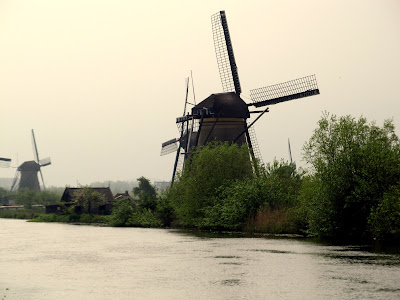 Windmills can pump or grind, but not do both. The grinding stones cause enough friction that there isn't sufficient energy to drive a scoopwhile around. 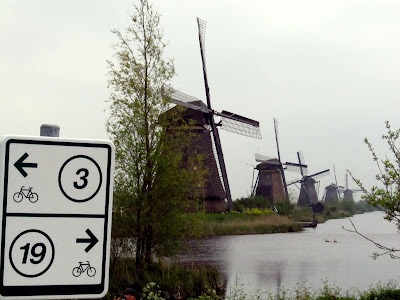 And finally, what happens if there is a hole in the sail? Why, it's patched and patched again until it can be patched no more and then it is replaced, leaving the old sail as fabric for children's clothes. 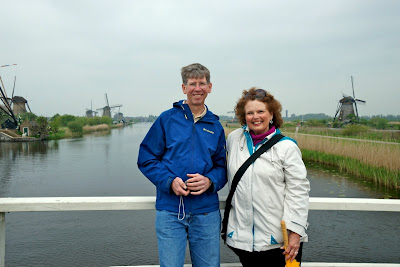 I found Kinderdijk a magical place. Perhaps it was the overcast day. 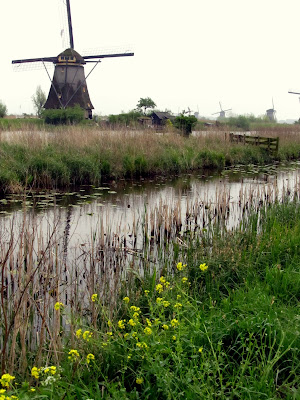 Perhaps it was the nature. 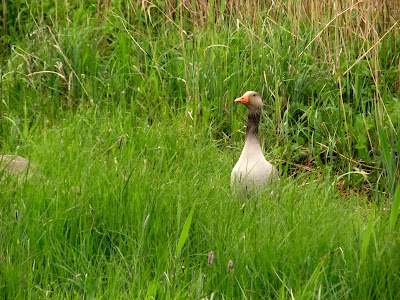 Or maybe it was because it was all I had imagined Holland to be. 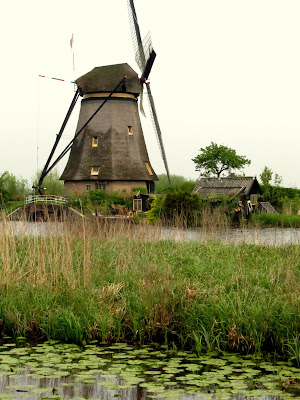 Again, the photos are charming, and really capture the atmosphere.

You're right; this is the iconic image of the Netherlands. And your photos are charming - some of the very best photos come from overcast days.

The pictures do a great job of showing how charming it was.

I didn't know that about the doors. My grandparents lived right across from a mill and used to take me there for a special tour. I'm going to ask my mom about the doors, see if she knows, though you're right, makes perfect sense. Now, why do houses have front and back doors as we have no rotating arms?

Your titles are always so apt for your posts...it seems that you did indeed visit a windmill wonderland.
Very interesting information about the windmills and your pictures are wonderful as always. You have a talent for sharing the appeal of the places you visit.

Good evening Jeanie,
Breathtaking photos.. The windmills are really amazing..
Thank you so much for sharing with us all.
fondly,
Penny

How beautiful...and just so charming! I love the foggy, misty feel... makes these windmill images extra dreamy! There's something romantic about these windmills isn't there... harkening to days gone by... This was lovely to see/learn about--Thank you, Jeanie! :o) Happy weekend ((HUGS))

I've loved windmills since I was a tiny thing - they were as much a part of my childhood as corn silos and cows! Here's a pic of one I saw on my trip to Iowa last year. There's no need to pump water away, so these are strictly for grinding grain - but my goodness, they're wonderful.

Your photos are marvelous. I can only imagine the day was, too. Of all the things you've shown us on your travels, I think this is my favorite.

Beautiful photos, Jeanie! There's something about windmills (and lighthouses) that I've always liked. And to think that these have been here since 1740! What stories they could tell.

I saw windmills in Spain, but they were nothing like these!

I love these shots, and the land you visited. In fact, I blog with someone who lives there and you should meet her! Dagmar can be found at http://barefootfromheaven.blogspot.com.
As usual, I love reading your posts - and seeing you on television:).

Hello my friend, Gosh how funny to see Sandy did post about the same as she did on my blog. Haha.

I am utterly in love with picture #2 because it pulls me right into the frame. Love the gras along the river and at the bend there's the mill. I've been in lots of them so do check out my post about one.
Getting dusty at the Mill with the Gilberts d.d. 05-18th-2011.
I have no idea how to put it in here so I'm leaving the work up to you to find it on my blog. Sorry about that.

So windmills it was for this trip, you made them special thanks for doing that.
Wonderful hugs Dagmar

This post is simply mesmerizing! Surreal... when one considers that these windmills were built in the 1700's. This village keeps history intact, and you and Rick are right in the middle of it. And they are so artful, aesthetically pleasing. Thanks so much for sharing these photos, everyone of them looks like a Vermeer painting.

Can you believe it? When we traveled to the Netherlands we were just in Amsterdam for two days and didn't see one windmill. That is at the top of my list for the next time we are there. They are beautiful and so much history to behold. I can't wait to visit this same location next year.

Jeanie, the windmill photos are amazing So much depth and color in them. It brought me memories of Don Quixote and his fights with windmills.

Absolutely dreamy and so informative Jeanie...thank you for sharing another wonderful part of your trip.

There is something very magical about windmills and wooden shoes and your travels!

These photos are so gorgeous! Windmills are so pretty! We have lots in the midwest, especially in ND and IA where the wind blows like no other. But they aren't as charming and cute as the ones you saw!!

Stunning magical photos--- how lucky you are to see such beauty in person :-)

Love the photos and all the details, Jeanie. I love visiting your page. I always feel as if I'm traveling the world with you as our tour guide. Love it.
Hope you can play along with us for Glitter and a Movie soon, but I'm glad you stopped by.
XOXO's,
Marcia

Hi there. Great pictures and storytelling!!! My wife, Jean, and I spent a day at the village of Zaanse Schans last time we visited Holland. In that village we got to see their collection of windmills. Like you, a trip to Holland just wouldn’t have been complete without seeing windmills in action. And there truly is a sense of magic to it. If anyone would like to check out our pictures of the windmills at Zaanse Schanse, they are at: http://frametoframe.ca/photo-essay-windmills-holland