After we left the Queen's Day ceremonies and merriment in Amsterdam, we headed off on a road trip to two towns to check out their Queen's Day activities. The first was Volendam. 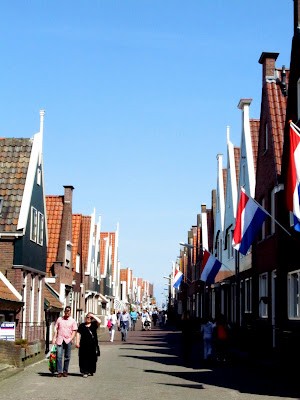 It was so nice, we went there twice! 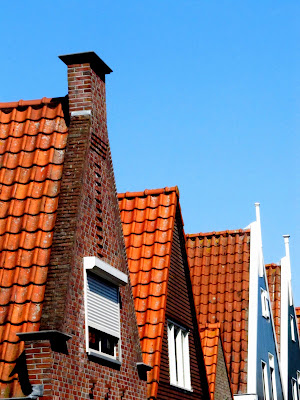 Volendam is a port city and our first experience with it was walking through part of the town and ending up at near the boats. 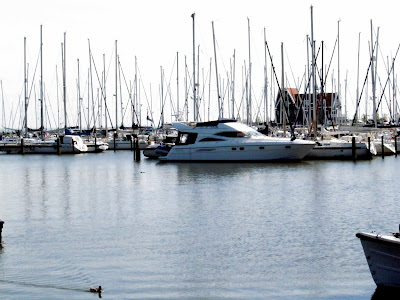 The view from the waterfront was charming and the day was perfect! Remember how we had so much rain on our trip? Not this day! 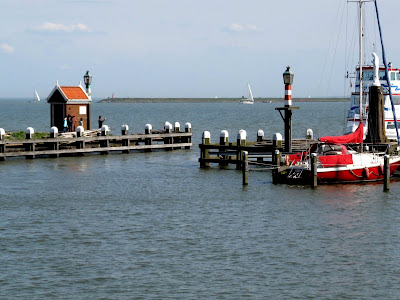 But along the way we saw some charming homes with crisp curtains in the windows. 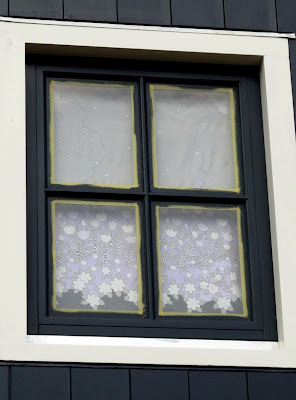 I loved these bright yellow shoes with the hyacinth showing. 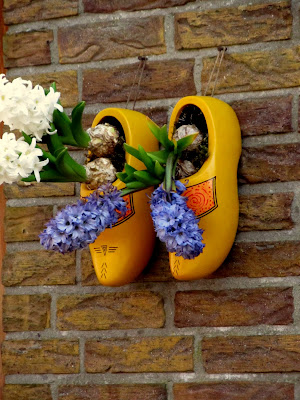 This shop took photos of people in traditional Dutch costume. As we walked along the waterfront, we spotted this cute little ice cream stop. 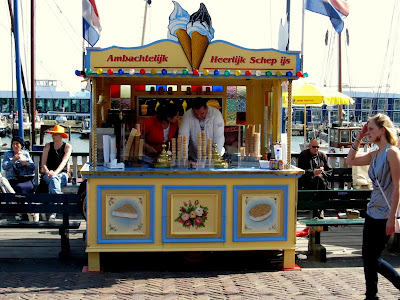 So of course, we stopped! 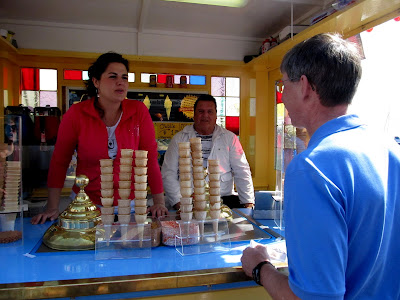 Then we wandered on some of the side streets. We passed the Volendams Museum, which had an interesting photographic mural on its side. 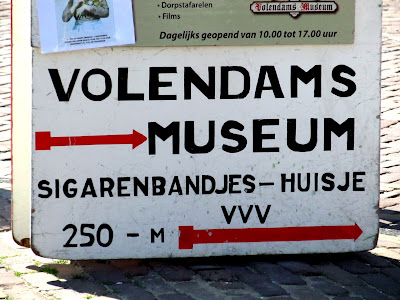 One of the first spots we noticed was on a street below -- a charming looking restaurant serving Amstel. It looked inviting but we'd already had lunch. 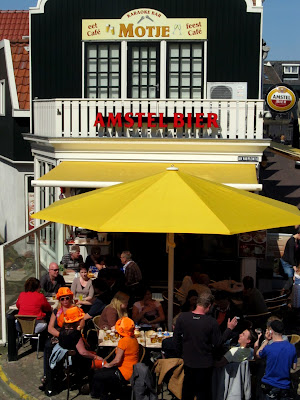 This shop had captivating windows. The photo and glare doesn't do it justice, but it will all make sense in a bit. 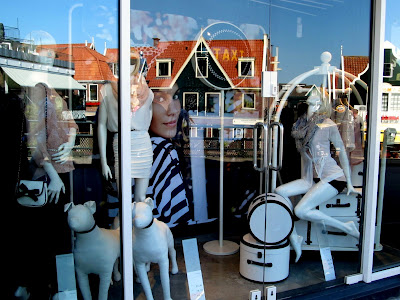 We still wanted to get to Edam, so we bid farewell to Volendam and hopped into the car. When we got out again, we were in a charming town. 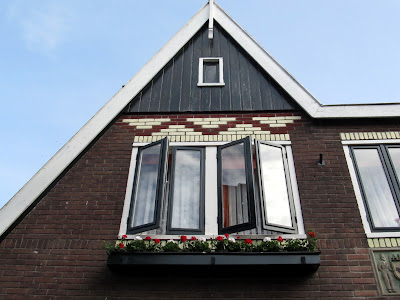 The houses were all tidy with neat numbers. 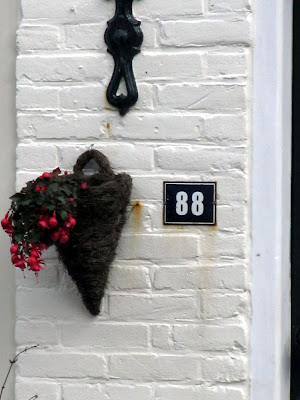 The canals were, of course, plentiful. 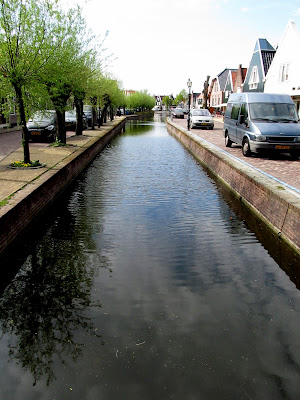 And there were even interesting bridges. 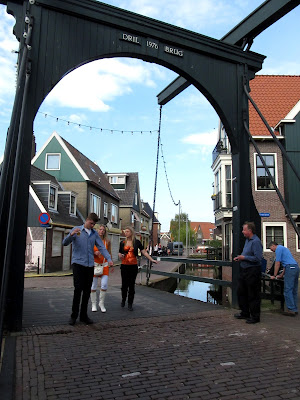 The houses were close to the street... 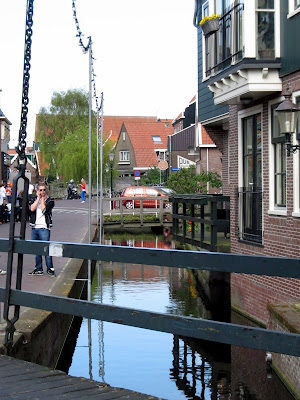 ...and some had interesting signs. This one would indicate the profession of the occupants had to do with livestock. 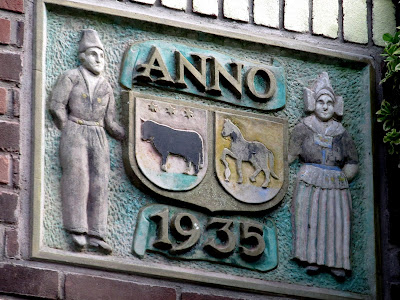 We noticed a familiar looking building... 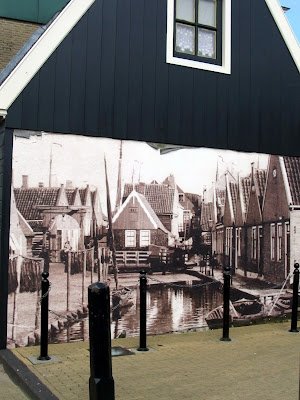 ...and then a bar/cafe serving Amstel.

Pretty soon, we noted that they even had the same small store as was in Vollendam -- with the same window display. What an odd coincidence!

Duh! We went back to Vollendam by mistake! And it was great, because we saw an entirely different part of the town, it all was delightful, and we had a jolly good laugh!

But not to worry -- there was still lots of light on this lovely day -- and we were off to Edam, which is where I'll take you next time!
Posted by Jeanie at 1:22 PM

What gorgeous pictures! I love the virtual tour of western Europe you're providing, Jeanie! It is satisfying my travel lust in total comfort!

I love that you saw Vollendam from two different perspectives. Delightful photos, as usual.

anno said...
This comment has been removed by the author.
Wednesday, October 03, 2012

Too funny! But I'm glad you got to see the same place from several perspectives. It was interesting to me to see these pictures.

The last time I was in Volendam was more than 45 years ago, and back then it was similar to Williamsburg in that people still dressed in the old Dutch style: wooden shoes, long dark skirts, colorful aprons, lace caps, etc., and I think they tried to show something about the native Dutch ways of making a living (fishing looms large in my memory). My parents tried to get me to eat herring, which I just couldn't even attempt. And, like you, we went from there to Edam, but my memory is that we made it there the first time. Great story, great pictures, Jeanie -- thanks for taking us there!

this place is so beautiful! I love the archtecture and the little canals, just very nice and quaint.

Vollendam looks like a city worth visiting more than once....funny that you visited twice in one day. I would have at least gone back to that cute ice cream stand again.
My best friend just left for a month in Europe...at least I am getting the virtual tour with you.

I have been to many places in Holland but never Volendam or Edam. I think Giethoorn is nearby, and that was a city with no roads, just canals. It was pretty cool. I have an almost identical pair of wooden shoes nailed onto a tree in my yard with tulips (fake but really good fakes) in them.

Looks like a great place to visit and enjoy over and over again...the wooden shoe planters are so cute!

So charming with the canals and old buildings. Glad Rick did't pass up the ice cream. How was his bike tour?

Everything looks so fresh and clean! It must be a beautiful part of the world. I'm glad we get to "tag along" on your trip.

I love the shots of the roof tops so neat and tidy!

I love that you are sharing all of this with us. Can't wait to see Edam.

What an interesting story to tell on top of showing the photos! That is one amusing episode. I love all these scenes you've captured, Jeanie, they're like illustrations in fairy tales. Guess my favorites are the shoes and the doorway, albeit every photo has its interesting focus. Now, I can't wait to see Edam. ;)

Love the pic of the clay tiled rooftops. So charming. And those yellow wooden shoes. Can you imagine actually wearing them? Probably more comfortable than some of those 5-inch heels models and movie stars wear.

This was a GREAT treat to see, Jeanie! So pretty... The Netherlands strikes me as a place where everything always looks neat, orderly, beautiful... a bit like in Austria, Denmark and other places. We've not been to the Netherlands--must remedy one day! Happy weekend, my friend ((HUGS))

Oh my goodness,
this is almost TOO
beautiful to fully
absorb.....love it!

I also love that photo
of the fashion store
window, with the
very pretty face
looking out : ) A
really cool shot!

Oh Jeanie, what a beautiful sight for the eyes! Just breathtaking..
Thank you for the tour.
It was so kind of you to come over for a visit and leave such a kind note.. I am so happy you enjoyed viewing my needle felting.. Yes! You should dig out your fleece. I would love to see what you would create.
Blessings,
Penny

I love the number 88
and the canals
and the crisp curtains
and the little ice cream
spot....what a beautiful
little journey:)
oh it's nice to travel
in your pocket!
-Jennifer

I really love this post. The town reminds me of one of my childhood favorites - trips to Pella, Iowa, a Dutch settlement only 30 miles or so from my home town. I visited again when I went back for Mom's funeral last year, and enjoyed architecture, food, Amstel and bakeries much like you enjoyed here. There even was a canal!

I had a pair of wooden shoes I used to wear during Tulip Time. The trick for me was a tiny piece of foam on top of my foot but hidden inside the shoe, to keep the top of my foot from being rubbed raw. I wonder if the Dutch have to do such things? I suspect the answer is that their shoes are better made!

I love those shoes holding the flowers! And the house numbers in other countries are always so much more charming, aren't there? Also, I love all the mustard yellow sprinkled in photos throughout this post! That is my latest color obsession!!

gosh your pictures are a reminder to me how many many canals we have...goodheavens. I knew but wowzers.
Wonderful shots Jeanie. Yet I don't like the houses like those AT ALL....to how do you say almost like fake. Like a dollhouse. Well I know you love them couse there forgein etc...but I adore the farms you guys have back home with the wonderful porch around it. See we must change country.
hihihi. Bye Dagmar

Funny! So easy to get turned around and lost when traveling. But it sounds like it was a delightful day none the less. How fun!