"In vino veritas." ("There is truth in wine.")
Pliny the Elder 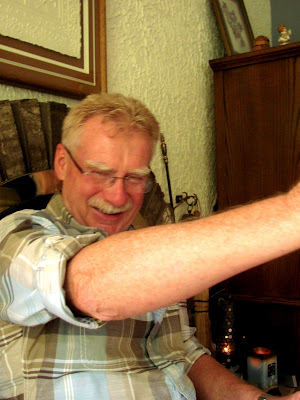 (The photo above is not Pliny the Elder.)

Pliny the Elder was killed while observing the eruption of Mount Vesuvius in 79 AD. Prior to his death, he also would have noticed that some of the land of the Amalfi Coast was destroyed. It is an area that produces some, but not a lot, of wines. In fact, there were few enough that our wine guide, Dick, also included some wines from Sicily in our tasting. 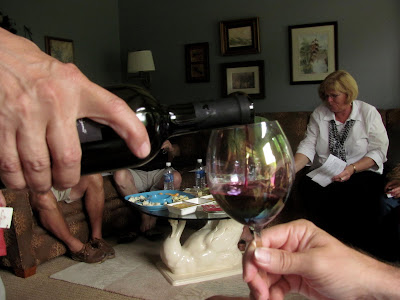 Those we tasted ran the gamut from one that all liked to some that were -- well, not bad, but overpriced by comparison to some other excellent offerings. 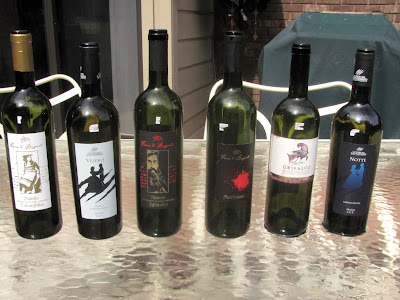 Wines have been grown in this region since Greek times, but of low quality, Dick explained, adding that one wine expert said you could count the fine winemakers of the are on one finger! 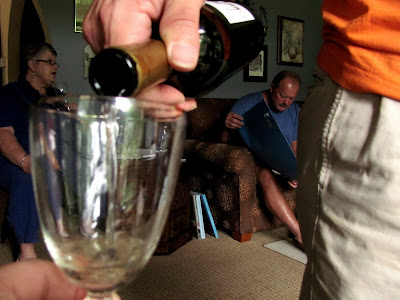 Our first wine was from one of the Amalfi Coast wineries. It was a Terra di Briganti Falanghina Sannio 2009, a white wine from Campania, Italy.

I liked this quite well for a white and wrote "very pleasing" on my notes. At $12.59 it as our least expensive wine of the day.

In the white category, Rick favored the LeTerre del Gattopardo Vespro Grillo/Chardonnay 2009 IGT. I learned that IGT is the fourth and last in the classification of wines, less qualities than the initials VDT, DOC and DOCG (saving the best for last.)

Rick said "I could drink this one all day long," which might be an exaggeration, being the red-wine drinker he is! But it was quite nice. I enjoyed that it was feremented first in stainless steel barrels before moving into oak. I'm not big on oak and you could tell it didn't start there.

Then back to Terra di Briganti for an Agliancio Sannio 2007, a red, again from Campania.

This wine is certified organic and a deep red. It was very fragrant and had extremely smooth tanins. Dick said this is one to open several hours before drinking. It was rustic with predominately tart cherries when first opened and he also recommended filtering it.

The next wine, from a different vineyard but from the Terra di Briganti company, was Aglianco Sannio Martumme 2007 DOC Sannio and Taburno.

It was very dark with a nice finish and again, should be decanted and filetered many hours before. Rick liked this better than the first red. At $21.99, we probably won't be picking any up at the store.

Our fifth wine was Grifalco Aglianico Del Vulture 2007 DOC. It was very dry and Mike mentioned that the flavor didn't mellow out with drinking.

"It sticks to your tongue," Anne said, and Meredith agreed, adding "It's like sandpaper." (Pity -- it was such a pretty bottle -- and there is a lesson in that!)

It was the first time -- in all of our tasting -- that Barb put it in the dump bucket, and she likes everything! At $19.99, we all agreed to give this a pass.

This had a wonderful finish was was a uniform favorite and it was my favorite of the day. (That said, we are always cautioned to beware of the last wine of the day -- the palate is desensitized by then.) It was $15.79.

As I said, I'll probably be giving most of these a pass, when there are so many tasty wines between $8 and $12. But of course it's always delicious and fun! 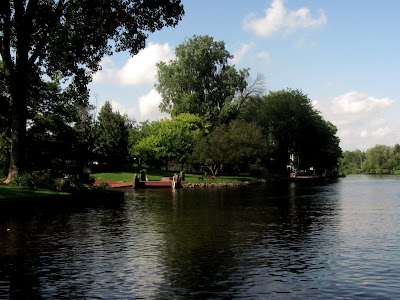 After the tasting, Roger took us "up the river" (the Grand River, that is) on a short boat cruise. 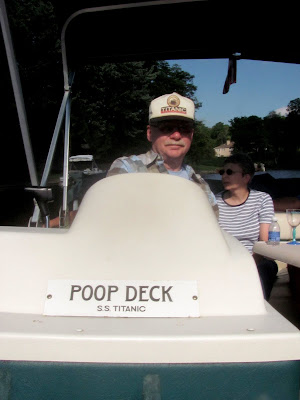 It was a perfect summer day, neither too hot nor too cold, sunny -- but not "too." 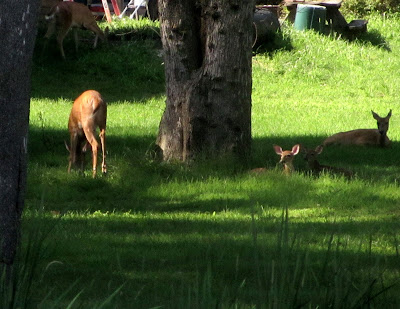 We noted some lovely wildlife. At first we thought these deer were statues. 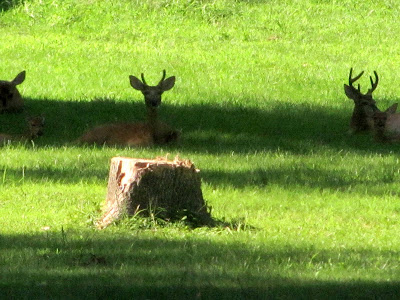 Then we saw the doe move her tail.

Altogether there were about 10 or 11 of them, male and female, one rather determined to get into the house through the back door. It was lovely and tranquil. 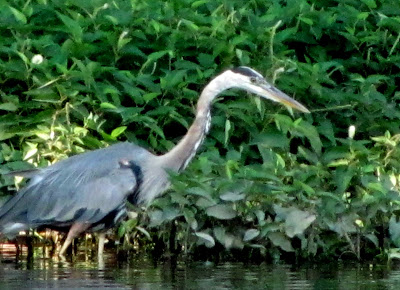 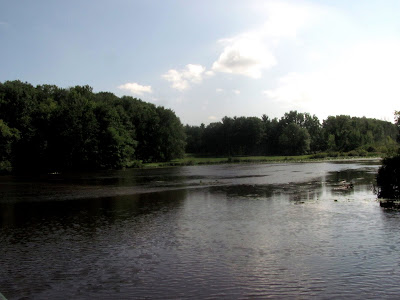 Our cruise ended back at the house where we enjoyed our always-wonderful dinner (Barb said it was becoming Gourmet Club!). 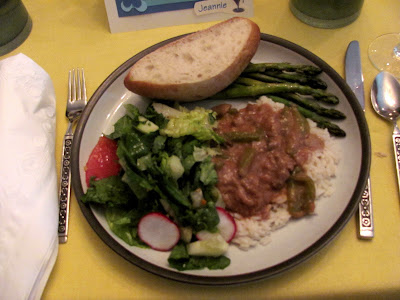 Meredith made place cards with photos reflecting various parts of our region and it was quite perfect! 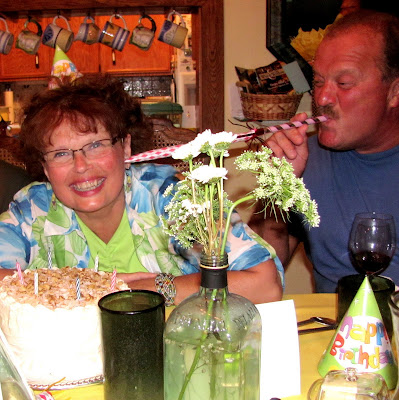 Then it was time for yet another birthday celebration! And this time, Dick got to share in it and Rick a tad belatedly! 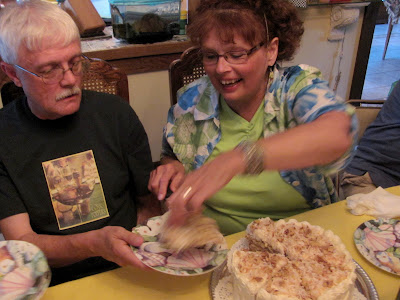 Good friends, good wine, good cake. It was a wonderful re-entry after vacation.

I'll have to try some of those wines. Encouraging that you got them in Michigan (at least I assume you did) -- since the state doesn't admit every wine in all creation!

I hope you are having as much fun as you suggest here!

It seems like the fun and celebration hasn't stopped, Jeanie, and that's so wonderful! I loved your pictures! What an absolutely perfect day!

Sounds like a perfect sort of day. You can't have too many of those.

I am behind reading your blog and enjoyed going to Myrtle Beach, NC, Toledo and other places. You have been moving around quite a lot. Also happy belated birthday – it looks like you celebrated well. I enjoyed looking at your shots of the antiquing you did in NC - I also enjoy doing that whenever I can. My husband is not a dancer – I’ll have to look that Bob fellow up if we drive north – he looks like quite the dancer. All you posts were a fun read.

A nice white wine for red wine lovers? I'm there!

You live well, my friend, and celebrate every day. I love this about you. Such festivities you share with wonderful friends. And Happy Birthday! Now I need to know which day was yours . . . :-)

Can you believe this summer got away from us? Well I don't think we could have borne a picnic in the heat of July. Maybe September will be just right for it. We need to just put it on the calendar ...

Sounds and looks like a delightful evening - and, of course, you should be having birthday joys all year.

Looks like a good time was had by all. Many more happy days to you!

It looks like everyone was having a good time for sure.

Such an interesting thing to do---especially if you like Wines. And I thought the comment about your mouth/tongue being desensitized by the end of the day, a very interesting one...So, how do you know if the last Wine is really great or not?

Happy Belated Birthday! And thanks so much for coming by today...! Yes, MERCURY is rearing it's ugly head....But, soon,m it will be over, Thank God! nd then we have the "shadow" retrograde to get through...lol!

Happy Birthday belated, Jeanie! Looks like you had a LOT of fun celebrating... that cake looks so good! What kind was that--looks like it has a nut topping? Oh, the wine... mmm... I do love me a little glass now & then. ;o) Many thanks for your kind visits. And for your interest in the chakras & creative art journaling workshop I'm taking part in. I have just done another exercise and hope to post that on Monday. Happy Weekend ((HUGS))

What a delightful expedition Jeanie! I love looking at all the different wine labels ~ so pretty as was the boat trip and meal! What a wonderful trip! Blessings ~ Katie

Having dinner
with our own
supper club
this weekend,
but I have to
say, I think the
Wine Corkers have
us in the FUN
department! Wine
tasting is one
of my favorite
things to do.
Have a great weekend!
xx Suzanne

I'm not a huge wine drinker, I'm more of a martini gal, but I had Yellow Tail on vacation and really liked it.

You all seem like you really know how to keep the party going!

Your wine club posts always make me thirsty and hungry! Thanks for some more good recommendations. I've never tasted much in the way of Italian wines, so I'm glad to have some first hand recommendations.

HI Jeanie, Another birthday celebration! Good wine, great food, fantastic wildlife and a boat cruise - you're a lucky gal! Jeanie, today the pro bike race comes into Breckenridge. Yes, we'll be there! Bob biked over Vail Pass for the time trials and will also bike up Lookout Mountain tomorrow to watch as the racers go from Golden to Denver. (I'll drop him near Lookout and go for a hike somewhere until I must pick him up.) Maybe i'll have a sip of wine afterwards...

Love the club posts. Eye openers (re: wine) and great pics (as always!)

But that plate of food really takes the cake. I'm hungry as I type this. Dinner isn't ready. But wanted to check in and see what you're up to.

Hoping your friends/family on the East Coast are ok in the face of Irene.

Whole lot of texting going on here in that regard.

I'm thinking HM and I need to open a bottle of wine - right now!

more later--
Plenty to catch up on!

Oh, my! Happy belated birthday, and every good wish for the coming year.
Obviously you're feeling better, and I see by reading back that Gypsy is, too - wonderful.

I particularly enjoyed the photo of you with your Raggedy Ann. She looks so much like mine, although it appears her hair is longer. Maybe they could have a play day sometime!

As always, enjoyed the photos of the fun and frivolity - and the info on the wine. I can't drink much red, but that first white sounds rather good. Tonight, I'm having a glass of non-descript rosé that was left in Mom's refrigerator. It's really quite bad, but I couldn't just pour it out - that would be worse than posting a photo! ;-)

you are always having the best times! Great that you can spend time with friends that enjoy similar intersts and share with them.

Hi Jeanie, I'm visiting today to read up on the wines. We tried a new one this weekend. I'll tell you more via email.
Continuing to read your wine posts.
xoxo's