On the Road Again!

We've been on the road -- this time down South! Our first destination was Cleveland, but I'm saving that for another post. The next day we ended up at Myrtle Beach. 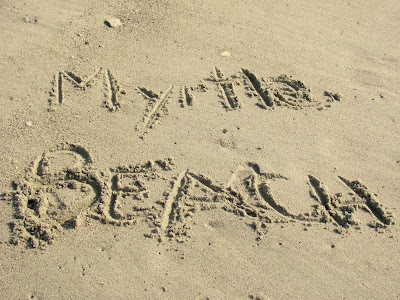 We have gone there for six or seven years for Rick's trade show. Trade show photos are boring. The beach, on the other hand, is another thing altogether! 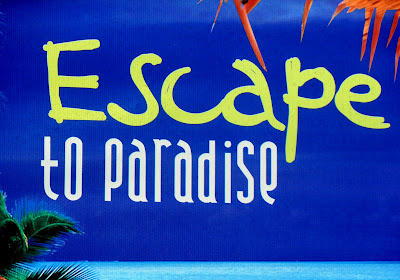 We have stayed at the Sun-Fun, a little mom-and-pop motel about a block from the beach, for almost as long as we've visited Myrtle. They could use a bit of an interior upgrade, but it's close to the water, less expensive than the waterside condos, has a pool and the owners are very nice. And who spends time in the room? 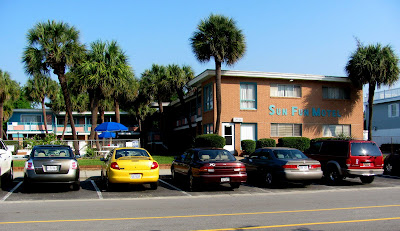 We cross over the street and pass the condos -- this is the view we face -- the beach, as wide and as far as anyone can see! 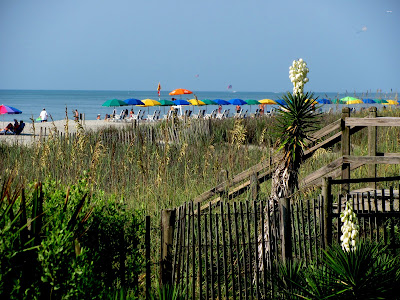 Rows of umbrellas and beach chairs are available for rent, bright and colorful against the sand and sky. 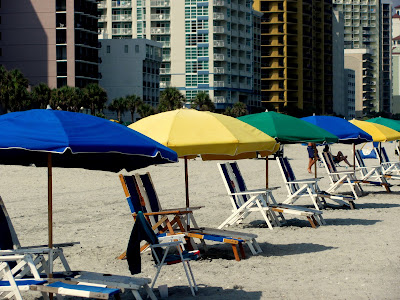 We opt for our own chairs and towels! Then it's time to people-watch, catch some rays and swim. 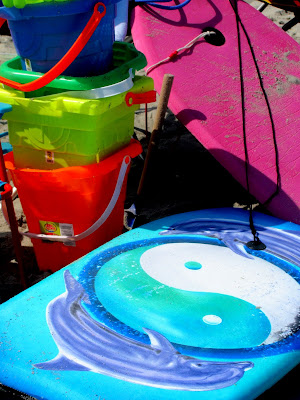 I love the people watching, especially the kids. There's always the one who is scared of the water -- for five or ten minutes, then is diving with the best of them. Or the one who just sits and soaks up the cool water from the breakers. 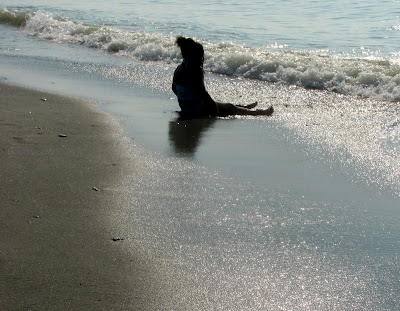 There are lots of "future engineers" creating castles from sand and shells. 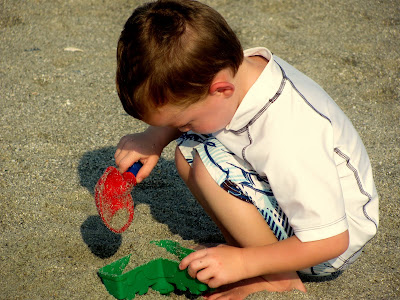 And then there are the diggers and sculptors, who create sand art while burying their buddy! 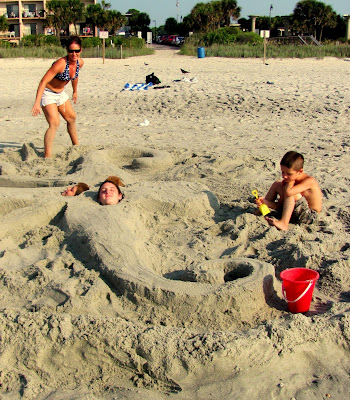 The new site on the beach was a Ferris wheel, which added a nice curve to row of vertical buildings. 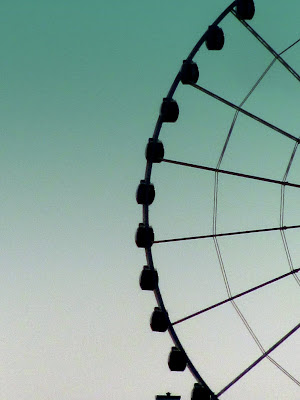 Walking the beach is always fun! (Don't you wonder how many pictures of a traveler are in other people's photos? At the beach, it may well be your behind!) 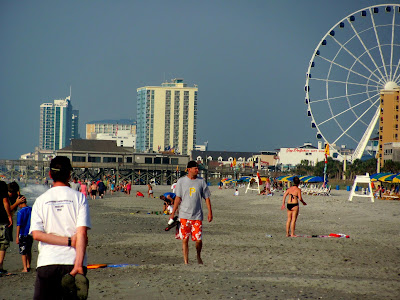 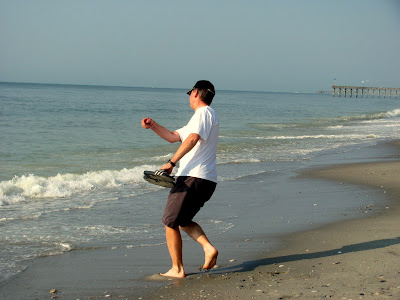 ...while I loved burying my toes in the sand, waiting for that cool breaker to wash over them. 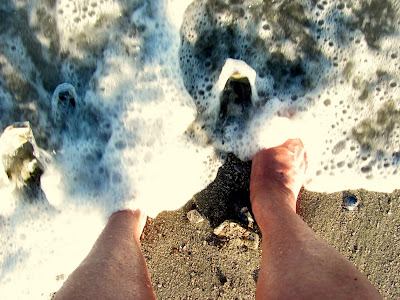 I could watch the water all day, and listen to the waves crash against the shore. 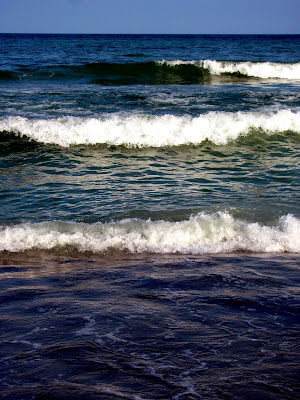 Even though it was calmer than our past visits (and far cooler than I expected, though it still was a nice 90-something!), swimming and jumping the waves in the ocean is wonderful. 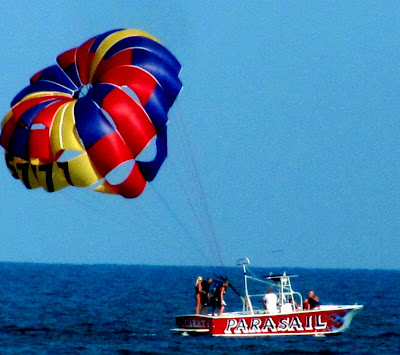 The ocean is healing for me, and I've been experiencing a great deal of stress lately. I'll write more about the healing power of the ocean in another post, but I do have to say it works miracles! 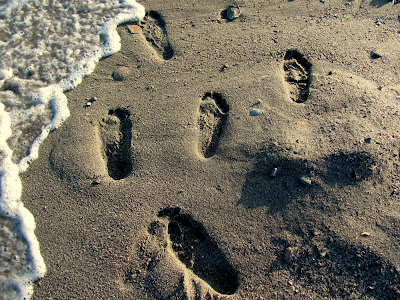 Of course, I would be a bad blogger not to include the obligatory food photo -- indeed, our dinner at Soho restaurant, walking distance from our motel, was delicious. I chose the crab-stuffed shrimp and really, it was unbelievably delicious and beautifully presented. 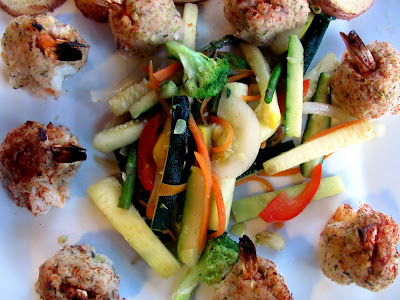 Even the mood lighting was right, as we dined on the porch, a warm but not stifling breeze passing by. 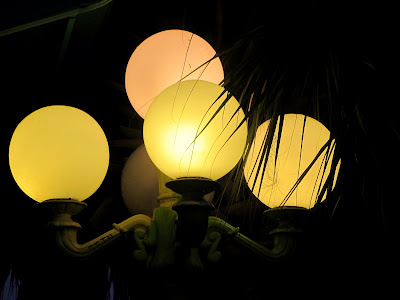 Happiness. Just happiness. I could have stayed there forever. 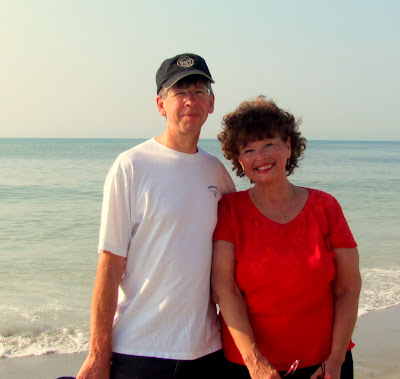 But that said, it was time to travel again! Where to next?

Oh, thank you, thank you, Jeanie, for a wonderful vicarious trip to the beach and an excellent seaside dinner! I feel I've just had mini-vacation from the searing heat! I can hardly wait to see where you go next!

You look marvelous. I'd say this get-away has greatly agreed with you. I've wondered what Myrtle Beach looks like since my cousin recently bought a condo down there. It looks like a neat place. Maybe I will have to try and work a deal with him so I can visit this spot.

I really love the photo of the footprints in the sand....it just gives me the feeling of walking on the beach. From all the pictures and your descriptions I can see why you feel like you could stay there forever.I'm glad you had such a good and relaxing time.

mmmmmmm.....feeling the rhythm
of those waves now.
thanks for the quick trip to
Myrtle!
feels as if I've got a bit of sand
in my flip flops now:)
-Jennifer
(awesome pic of you and hubby...such a cute couple!)

Looks like a wonderful visit! Thanks for sharing. There is something soothing about the ocean...

There is something wonderful about being at the beach; I really should go more often. I enjoyed going vicariously through your post.

It looks like heaven! There's nothing like being near the water to bring on that relaxing feeling. Thanks for taking us along!

how special to get to visit Myrtle Beach with you two Jeanie!

we haven't been in a while...but I still remember a couple of fantastic meals at The Collector's Cafe...they had great artwork too! wonder if they are still in business

your photos are so colorful and fresh and fun!

What a wonderful get away for you - and what perfect timing. Sounds like you were in need of the healing power of the mighty ocean. You look very refreshed in that last photo. Thanks for sharing your pics!

I am so happy to hear it was a stress reliever. This is my all time favorite thing to do - toes in water and maybe even the whole body. Loved your photos of the umbrella's and the water. We do the same thing with cheaper accommodations, as for sure we are not there but to sleep and change clothes.

There's nothing better than being on the water to soothe, restore, and repair the soul. So glad you've had this chance to get away from it all -- it looks beautiful!

Oh, my gosh. I want to go right now. Your photos capture it perfectly.

We are planning a beach trip finally next week, as long as nothing goes wrong. I can't wait. Has been 6 years since we've been to stay for any length of time. You are right there is definitely healing power to the spirit if not the body, at the ocean side.

Actually, we had been toying with the idea of heading that way ourselves...since the big two.five anniversary is on the horizon...looks absolutely lovely...might have to put that one back on the table.