We're working backwards now. If you read my vacation posts, I said we'd get back to Cleveland. That was the first leg of our trip and it started with a visit to Tony Packo's in Toledo for lunch -- this was the original. 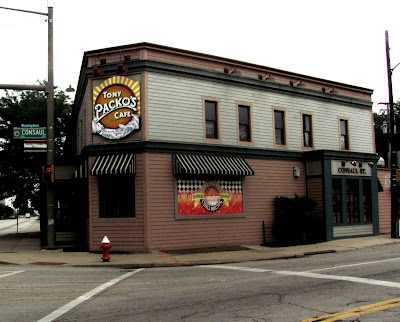 Chili dogs are their specialty, as are some Hungarian dishes. You order from the cafeteria line. 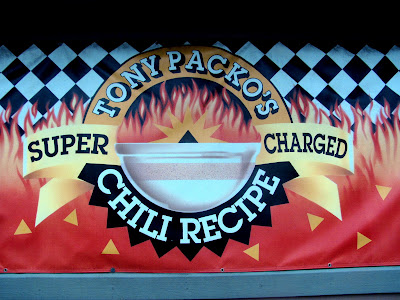 By the time you get to the end, you have a full plate with sides including the most fabulous pickles I've ever had. (And yes, I bought some in the gift shop!) 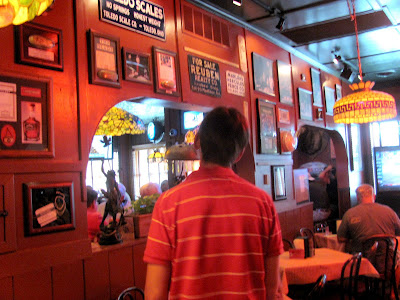 Tony Packo was a factory worker, the son of Hungarian immigrants who lived in Toledo. In 1932, smack in the early years of the Great Depression, he and his wife got a $100 loan and opened a sandwich and ice cream shop, having learned the restaurant business from his brother. The location was on Consaul Street, in a Hungarian neighborhood. 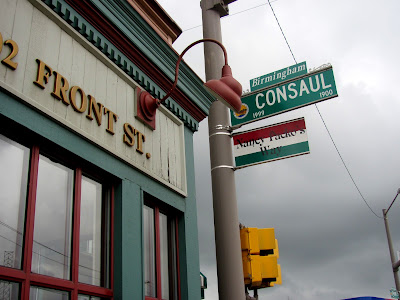 Hot dogs were his game and Hungarian hot dogs were his specialty -- a specialty he invented himself. And people loved it! In fact, they soon expanded the size of their shop and shortly after moved to their current site at Front and Consaul streets. The restaurant is still run by the Packo family. 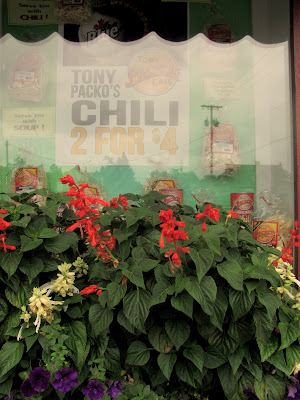 The restaurant came to the attention to those in my generation through a little TV show called "MASH." Corporal Klinger, the wacky medical can-do guy of the 4077th, was played by native Toledoan Jamie Farr. 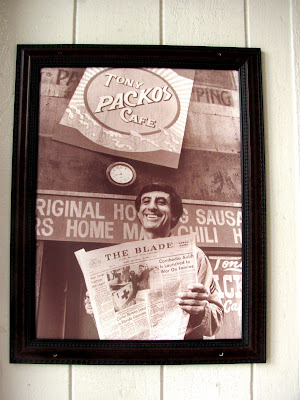 In the episide, he was interviewed by a "newsman" and added his own ad libs into the reply. Screenwriters loved it and included the show in several episodes, including the most-watched final episode.

You enter, order from a long counter, looking at the menu printed on the wall, get your food... 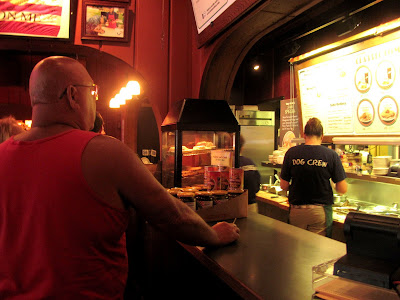 ...and then find your seat. 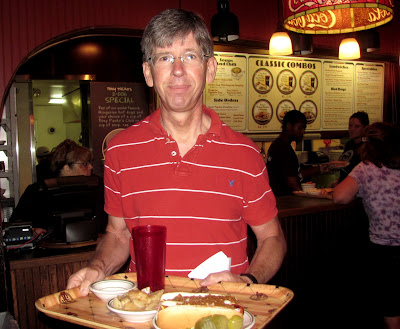 Along the way, you can take a look at fun things on the wall, like a portrait of the MASH cast or the "signed" hot dog buns that are framed in the wall. 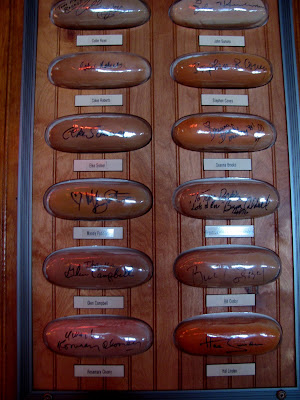 The first signature was from summer stock player Burt Reynolds, a star on tour. Now there are several frames with many signed buns. 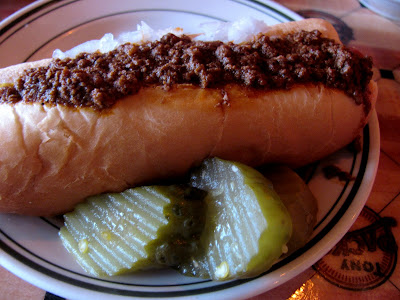 Check out the menu for items like Paprika Dumplings with Gravy, Hot German Potato Salad, wonderful strudels, cabbage combos, and of course, the celebrated hot dogs. 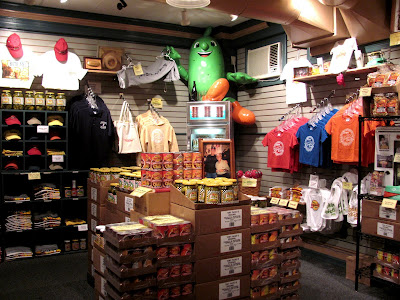 Then make a stop at the gift shop. You'll find the usual t-shirts, mugs and other souvenir items, but you'll also want to buy the four-star pickles (offered as a side dish on the menu) spicy and loaded with garlic, or the hungarian noodles. They also offer a sweet version of the pickles and I wish I'd bought both!

If, like me, you enjoy neighborhoods that seem little changed since the 1930s, take a walk around a couple of blocks near the restaurant. 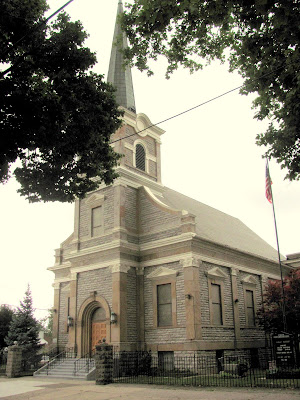 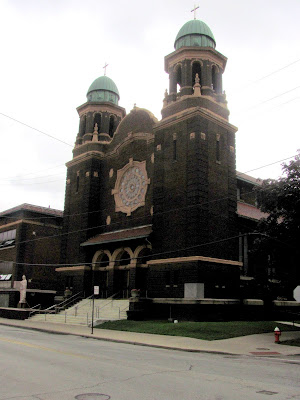 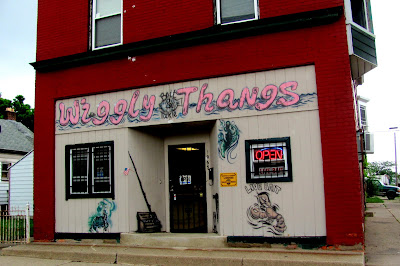 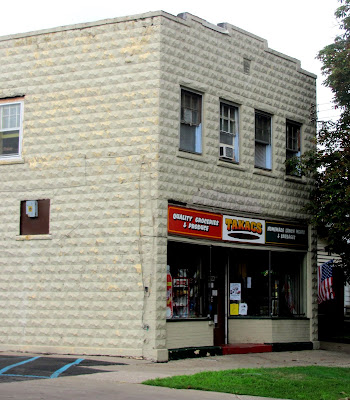 ...and houses that were smack out of a Frank Capra movie. And, if you're really lucky, you'll see an orange cat that much resembles The Marmelade Gypsy!

If you're in the Toledo area, give the original Tony Packo's a try. Yes, there are chain locations and the food is good. But this is the real thing!

Check your first paragraph. I think you mean Toledo vs. Cleveland. Glad you enjoyed your visit to Toledo. :)

Thanks for the virtual tour to an authentic part of the America that's all too rare these days! Loved the picture and the narrative!

Thanks for playing tour guide. What a neat place (and the food sounds good, too)!

My husband would love Tony Packo's. Actually, while I was eating the food, so would I. Later, I'd be sorry I indulged.

Thanks for the interesting visit to this area.

Oh I wish I was on my way to Toledo right now. The food sounds so delicious and love, love good pickles.

Wow, Jeanie, what a tour. I love neighborhoods like this. It makes me want to go back to Wisconsin and explore my old stamping grounds.

Hi Jeanie, Happy Birthday a bit late. The story of Tony Packo's brings back lots of memories - Marv grew up not too far from there! Of course that was before MASH and gift shops! Thanks for your delightful writing.

All I have to say is holy smokes and holy cow and holy mackerel you have done a lot of traveling and eating good food this summer, Jeanie!
And happy birthday.... bittersweet.
Wow, so sad about all those jobs lost. I know survivor's guilt is rough, but I am sooooo glad you still have your job.
And also so sorry for all the "sad events" and illness of late.
Ahhhh, life is rough, but it keeps on rolling along, and there are those super sweet moments.
Take care dear friend! Talk with you soon.
Kerry

your travels are making
my stomach growl:):):)
what a fun summer!
-Jennifer

I've never been to Toledo and will not be getting there in this lifetime, since I am unable to travel now...But, I LOVED reading about the History of this wonderful unique restautant....And that the family still runs it...THAT is even more wonderful!

As many times as I've been to Toledo, I've never been to Tony Packo's. You've made me want to take a day trip!