And Now for Something Completely Authentic

If I had to pick one thing I'd never forget from our holiday in North Carolina, I'm not sure what it would be. The canoe ride, the play, being with family. It was all terrific. But one thing was really authentic down to the bone. 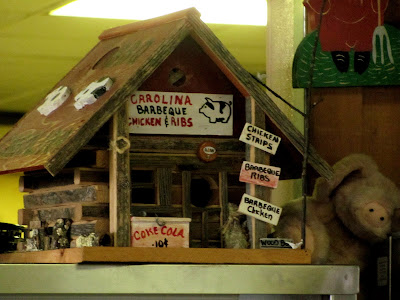 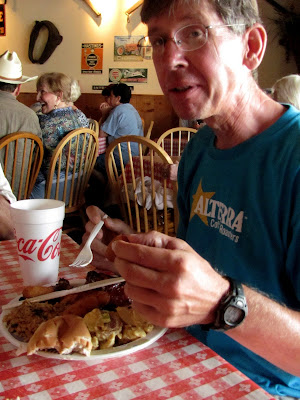 Rick loves barbecue. Our other favorite place, Doc's in Columbia, SC, didn't fit the agenda this year, and while we found a pretty decent chain for lunch it was -- well, not authentic. 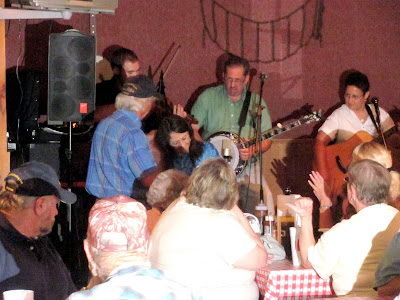 But while he was on his ride, he discovered the Carolina Barbecue in Newland, NC. He learned there was music there that evening and we decided we had to take his dad and Kathy there for dinner. 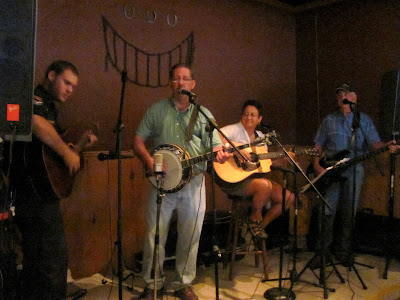 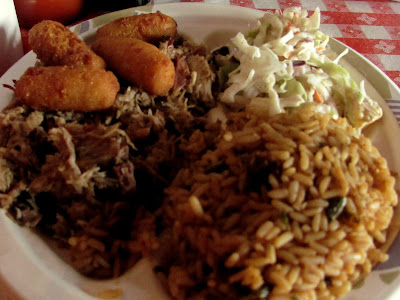 Then while it's being prepared, you find your seat in the main room -- checkered table cloths, tables close together. At the front of the room a bluegrass/country-style mountain band is playing -- and playing well. 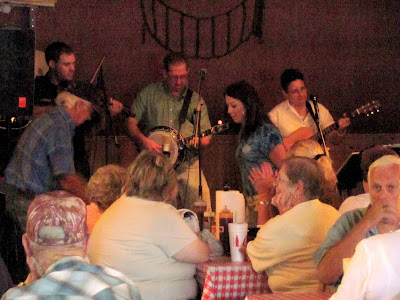 People are dancing between the tables, clogging with their taps, doing the two-step. 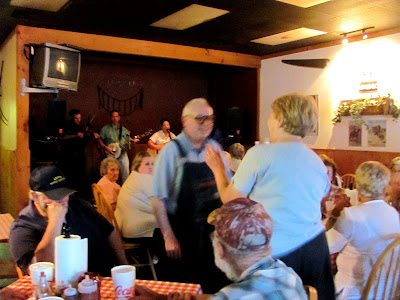 Everyone is dressed like -- well, real people. No tourist clothes there, except us. As Kathy pointed out, Rick and his dad were the only ones not in jeans! 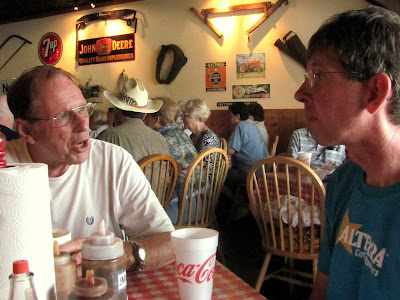 The band was great, the food was better. The desserts (cobblers) were delicious. 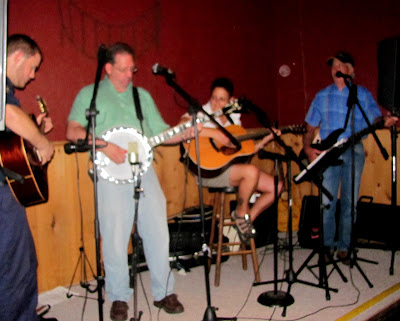 Only one other table looked as though they were passing through. The American vacation -- all this life and energy going on and the kid couldn't keep his eyes off his iPad! 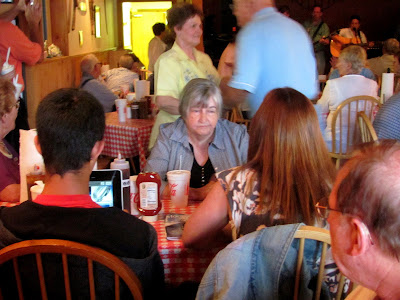 Well, there was one old fellow there who was an amazing dancer! He was dancing with lots of people (seemed like everyone did), including our waitress. 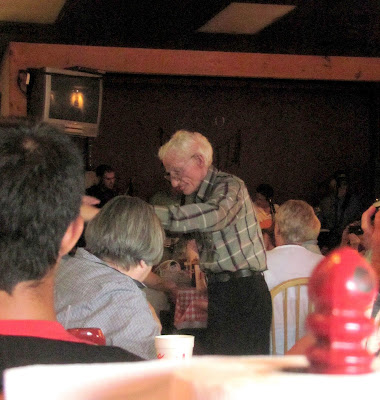 Kathy said he was famous in those parts, a well known dancer. When I went up to get a photo of the band, Rick said to him, "Jeanie would love to dance with you." (Which was true -- Rick has many wonderful qualities but liking to dance isn't one of them.) 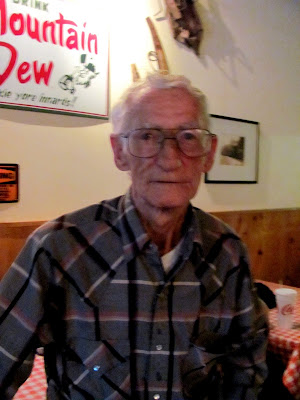 So, Bob Aldrich and I tripped the light fantastic. He taught me the simple rhythm and in no time at all I felt as though I was part of the gang. 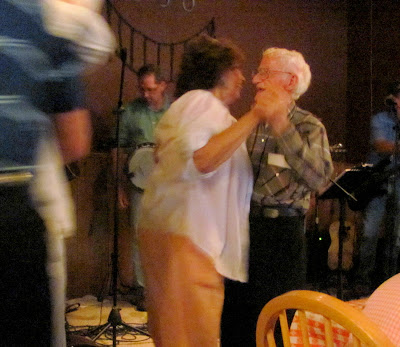 He showed me his photos -- he'd just done a TV appearance in Durham the week before. He also gave Rick and I his phone number and was very chatty. When a second song started, we danced again. 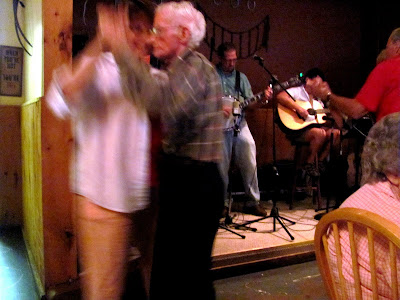 The photos don't do it justice. Relyn calls some moments "unphotographable" and this was one of them. 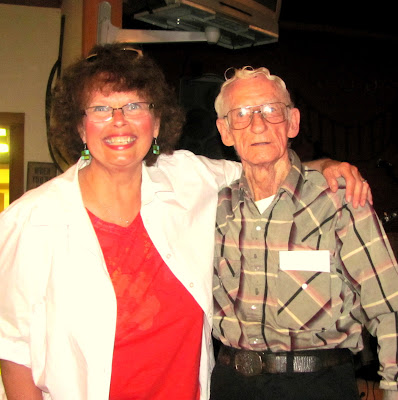 But it was so very memorable! He was a genuine character -- truly authentic.

And so was the experience. If you're in that part of the country on a weekend, check out the Carolina Barbecue in Newland, NC -- and if you're lucky, Bob will be there. Don't be shy! Ask him to dance! (And leave the iPad at home!)

(Sorry the photos are a more than a tad fuzzy; dim lighting and a zoom full out, plus lots of movement do not crisp shots make! Like I said, "unphotographable!")

Jeanie, you have the BEST smile ever!

What a great place and wonderful experience, Jeanie!
I've loved hearing all about your vacation adventures. But the greatest thing about the pictures here is seeing your beautiful smile!

What fun! (And that's a heap of food!) Glad you kicked up your heels, Jeanie.

It looks like a lot of fun. I think moments and times like these are best captured in our memories. We don't really have to have the photo, except the last one that shows you radiantly smiling.

It sounds like you found the heart of the South at the Carolina Barbecue.

You really know how to have a good time!

All your travel posts are just wonderful! I love how you detail your experiences, with photos to prove them! These are marvellous, enjoy your dancing pics, and really love to try the NC BBQ... and at that mouth watering price! The canoe photos are lovely. I especially like that monarch butterfly, beautiful. Glad you've enjoyed your trip and thanks for sharing with us.

That looks like total fun! What an experience getting to dance with Bob.

This place is such the REAL DEAL that it doesn't even have a %^&*(*& Facebook Page (or whatever you call it) and it doesn't have a web page either. Real people and places don't do (or need) facebook.

That last comment was from Rick, I can tell! (Based on the anti-FB references!) And he's right -- it IS the real deal in every way! Including no FB or web!

Actually, Rick claims that comment WASN'T from him... Not sure on that, but I know he agrees with Anonymous!

oh yes oh yes
....I'm a North Carolina girl
and I can SMELL this pics!!!
Spicy and comforting to my bones:)
I'm glad you wallowed in the BBQ
culture for a while.....priceless.
-Jennifer

It sounds fabulous...I can feel the energy:). And you've made me hungry! See you at Bob's this weekend?

I can taste, hear and feel it, how fun is that! You must have had a blast. Bob really gets around for not leaving that place. Just wonderful.

Hi, Jeanie! Ooo... what fun! I'd love to dance... if I knew how... LOL! Thanks for taking us along. You've been taking some great outings. Thanks for stopping by. I did get your comment. I have comment moderation in place--and there's a bit of a "gap" after verification, but no worries, I get them all and update as quick as I can. :o) Happy Days ((HUGS))

what special memories and friendships you made ... looks like a wonderful time was had by all
oxo

If Rick loves BBQ, if you ever pass through Cullman, Alabama, the main city in our county, you need to stop at Johnny's BBQ on Highway 278. It is pretty well-known and has great BBQ sauce, especially if like one that is sweet and not just smoky. We've had people in Dallas, TX talk to us about how much they loved it, when we were travelling and mentioned where we were from.

Loved your pics, btw. Your dance partner was a cutie!

thank you for your story and pictures. Bob was my grandfather and I came across the story after a web search. Bob passed away in September 2012 but his memory lives on by the people he touched. Thank you.