Gyppy and the Visiting Vet

Gypsy has a new vet. She came to the house for our first appointment last week, and we sat in my living room where we talked for nearly two hours before she touched the Gyp. By that time, he had developed a cozy friendship with her textured leather bag, no doubt full of the smells of many another cat before. 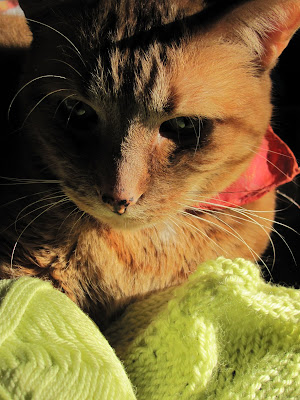 When they did have contact, she was an old friend, whose familiar and warm voice and gentle touch "allowed" her to build a relationship with my orange boy.

When she left, I had a new meal plan for Gyppy -- one that will take about six months to integrate -- and a new insight on my boy, his psyche and veterinary medicine. 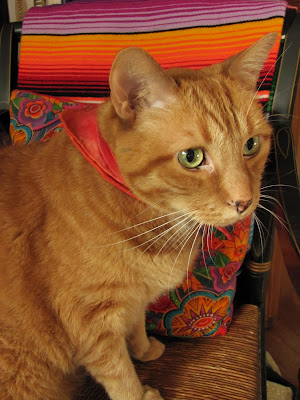 She is a holistic vet, and while she is perfectly willing to use traditional medicine or prescriptions if the situation warrants, she believes is treating the whole animal.

She touched him gently, moving her fingers over the acupuncture points on his back. As we discussed Gypsy's reaction to Stimpy's death nearly five years ago and how he licked his stomach and part of his paws bare (he's now furry again), I was relieved that she understood that animals grieved. 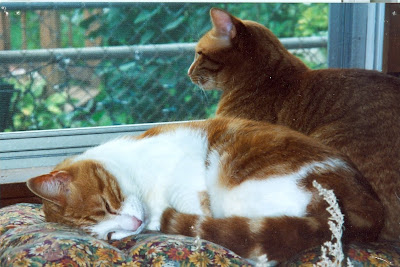 She explained that often soothing himself with grooming also could mean his stomach was upset, as ours sometimes react when we are under stress. And interestingly enough, all the places he licked were on the nerve tracks of the digestive system. 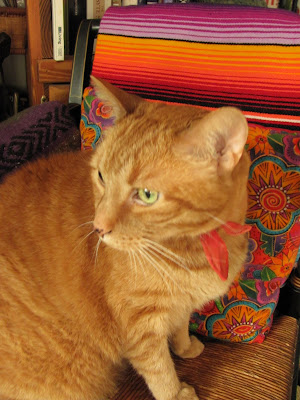 Then she asked me if he threw up. Bingo! And when he does, his dry food isn't always fully digested. As she felt him later, she could tell by his intestines where part of the digestion situation fell.

I learned far more from this session than anyone other than I would be interested in sharing. But there are a few things that might be useful information to all pet owners -- whether or not they someday choose to take a holistic approach with their pet. 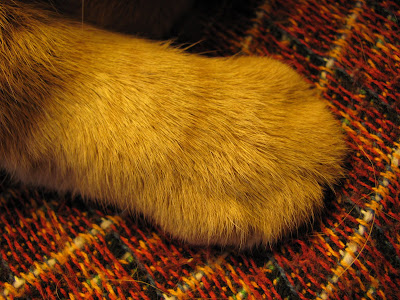 She doesn't recommend vaccinations for older cats. It can be hard on their heart, and they may well have an immunity over time. (I'm not sure of her take on this for dogs.)

She advocates use of flower essences for certain behaviors. For example, Gypsy has always been a needy, clingy boy (which I like), and I've always felt it was because he was abandoned as a wee little kitten. 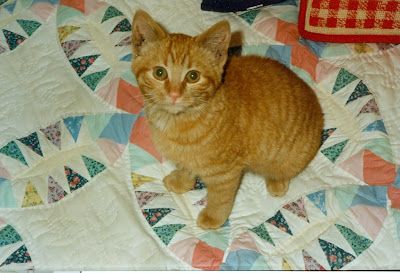 She "gets" this. And he's very anxious in the car. (aka, the Happy Hurler.) Among the essences I'll be getting first are "abandonment" and "anxiety."

And really, things like that work for me -- why wouldn't they work for him?

Corn is very difficult for cats to digest and wheat isn't great either. When you are buying cat food, that should not be near the top of the ingredient list.

And you don't want "by products" there, either. Or, you may be feeding your cat (and dog), things like ground up chicken beaks or fish poop.

She says wet food is often better than dry because of the moisture and being easier to digest, among other things. 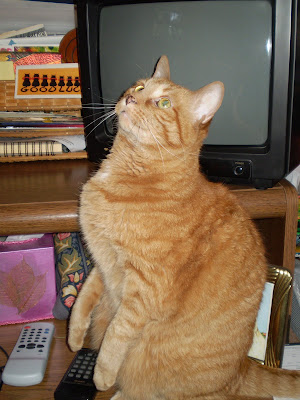 But the real idea is to move toward people-grade food. Gypsy will be experimenting with tomato sauces, pasta sauce (hold the pasta), asparagus, and more. This will take some time to integrate that successfully, but will ultimately result in a better coat and easier digestion. 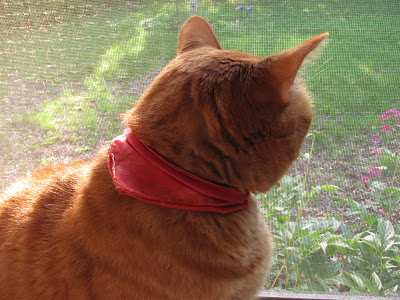 Speaking of poop, she's very big on checking it in the litterbox. Does it break easily? Is it hard? Do things appear digested? And someday, "is it different than usual?"

By listening she could tell me that Gyp had a heart murmer, so no soy sauce for him, but that can be a flavor they gravitate to and it's fine if there's no medical reason to avoid it. 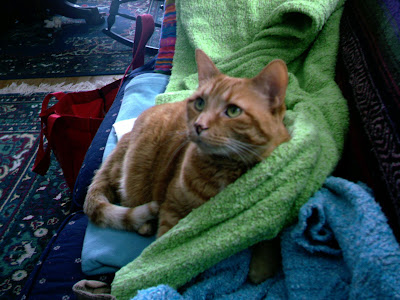 She also listed several commerically prepared cat food brands (and dog) that had a better combination of ingredients. So, I'm off to the pet food store. (And, she wisely also suggested I not overbuy any one of the three recommended to see which he decides he'll like best.) 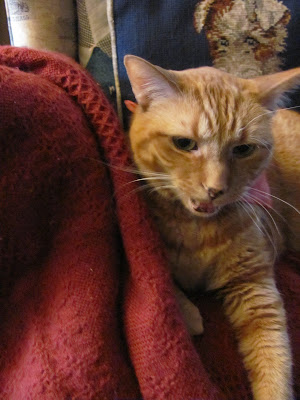 Gypsy rarely met a brand of food he didn't like, so I'm looking forward to first shifting him to a better commercial brand, then integrating more of my home cooking into his diet. 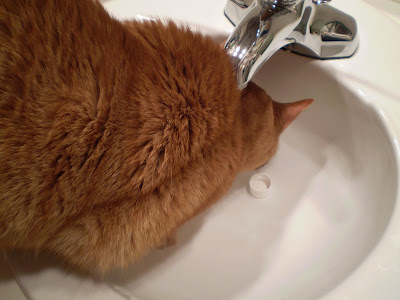 I was sorry I had to meet people for dinner so we couldn't talk longer! I felt as though I'd met a friend who wants Gypsy to be around a very long while, just like I do. And in the best way possible.

Wow! The woman sounds like an amazing vet ... so glad you found her. Beautiful pictures of the Gypsy!

You have no idea how envious I am! Trying to find a holistic vet is so difficult!!
My cats love people food, too. (One of them is addicted to cheetos, if you can belive it. I have to hide those!) Their favorite is chicken and spinach.

Jeanie - this was just the most interesting read. As the former owner of countless cats (that found US), I was fascinated by the insights and understanding I read here. We don't have cats these days; not even cats wandering in the back yard, thanks to Tanner. He's not much bigger than many a cat but he sure is loud. Other yards are far easier places of exploration these days.

Oh boy! I wish I had an experience like that! I am going to look up and see if there are any vets like that around me. Coming to the house is something I have always wished for. Great information in this post! Could you email me to tell me what kind of foods she recommends? We have been giving Buddy and Pal dry food exclusively and I think we need to add some wet food. I have been a basket case over the last week with Pal being sick and then the rehab house situation and them being home alone while we are at work.

Very interesting. I know of people who cook up dinner for their dogs every day, Cookie gets wet dog food with a small dish of sort of soft kibble for snacks. It sounds like you have a treasure with this vet.

sounds like you not only got a wonderful vet ... but a cat whisperer too ... now that's special!
oxo

You hit the jackpot with this vet! She sounds like she not only knows what she's doing but she also cares about your cat. Almost unheard of!!

I do love a good Gypsy post with all his photos. You sound as if you have found a fab vet as well.

Oh, you do love Gypsy so ~ it comes through so lovingly in your words.
What a fantastic vet. I'm a subscriber to holistic medicine for humans, but hadn't considered it for my sweet Gracie. Fantastic that there are professionals like this still in the world ~ making house calls, no less! Beautiful cat and wonderful pictures, too. xx Suzanne

Wow- what an interesting idea. I've always liked the idea of being open to holistic medicine for myself, but there really isn't any reason why it would be great for pets too.

Anonymous said...
This comment has been removed by a blog administrator.
Saturday, June 12, 2010

I would like to have such a good doctor for me, too.
We found out during our time with Ronja that the vets are the same as the doctors, there are a few good and a lot of bad ones.....Fortunately you have found a very good vet!!!

and i thought mine was the best one ever....you might have me beat !

That was interesting. We've had some experience with having to be careful with the food for Max. He is prone to food allergies. I've been through all kinds of expensive foods for dogs with all natural, very few ingredients. He will be fine on one for awhile and then start being itchy and start losing his coat, so then it's switch to a different one. Right now he is doing great on one made by Purina, one of their new ones.

How wonderful you've found such an understanding holistic vet! Your Gypsy is special to you, I know. He is one handsome dude!

How interesting and encouraging to know there are vets like that around. My two have always been very healthy (knock wood), but I would love to have an alternative approach should the day come when we have health issues to worry about.

Thanks for such an informative post. My cat has been throwing up his undigested food. Off and on for the past year. What did she say was the cause of this? He does not have fur balls. This is definately food. I'd like to make changes to make him happier.

How wonderful! I'm so glad she came to meet Gypsy! What wonderful info!

What a great post! Thank you for sharing all of this information. I'm glad you found someone so understanding for sweet Gypsy. My kitty is so picky she doesn't eat most foods. She seems to like spicy stuff though (popular in our house) and cucumber, but the gooey part in the center, minus the seeds.

I've always said - only half jokingly - that if I got really sick I'd rather go to the vet than the people doctor.

Gypsy's new vet is wonderful. I'd be willing to back off on vaccinations for Dixie, except for the fact that they're required if she needs to be boarded somewhere during a hurricane evacuation.

As for food... I wish I could get her to eat something other than Science Diet dry. She won't touch chicken, salmon, beef, egg - anything. She won't even eat wet cat food. I suppose if I got firm about it and withheld food until she ate something else she would, but that's making a terribly upsetting experience out of meal time!

I'm going to re-read this a few times, and then go tell Dixie all about it!