How I Named My Blog Day -- The Marmelade Gypsy

NOTE:! Welcome to December! All month, at least one holiday image (it may be the only thing in the post!). AND over at Chopsticks and String I'll be posting an ongoing holiday survival and fun series -- some of my favorite tips for the holidays from movies and books to party fun to present wrapping! Check regularly (or look for updates in my sidebar here on the Gypsy. 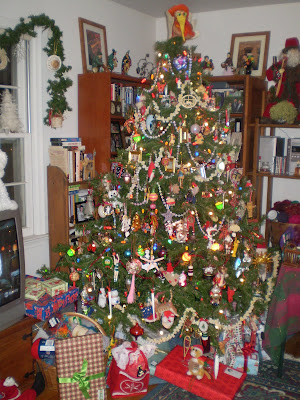 Today Ruth is celebrating "How I Named My Blog" day over at syn-chro-ni-ci-ty.
Hopefully, you are participating too, because she is offering a "major award" -- and besides, I want to know how you named your blog!

The Marmelade Gypsy didn't begin as a deliberate decision. You all know that Mr. Gypsy Rose is my overly sweet, needy, orange cat. And you probably know that orange cats are on occasion called "Marmalade Cats" for their rich color. 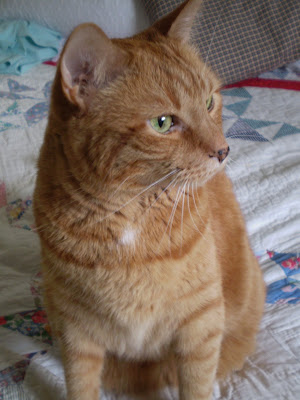 So, it seems obvious. But the first name for the blog was "Le Chat Orange" (The Orange Cat). It was a play on the French series of cat work by Steichen called "Le Chat Noir" (black). I thought I nabbed that name for Blogger --but who knows? I could never find it or whatever address I had at that time to synch up! All I know is that when I went to "claim it for real," Blogger said it was taken. And I've never found another with it.

So, I made a test blog -- The Orange Cat. I still have this as not-public to experiment without fear! 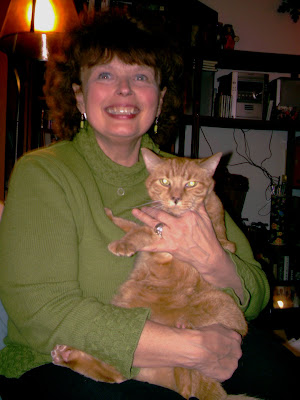 Ah, but the "Marmelade" part. It seemed like as good a name as any -- I often called him my "Marmy Boy." In fact, lots of you think that's really his name and now it has become one of them!)

(It will come as no surprise to you that the musical "Cats" and T.S. Eliot's poetry collection that inspired it, is one of my favorites. If it's one of yours, you'll know how "The Naming of Cats" poem/song lists all a cat's names -- and one can have many! Gyp's include "Gyppy," "Mr. Gyps," "Gypadedoodah" "Gypadoodledoo" and "Punky Monkey." When they were a team, Gypsy and Stimpy were my personal "Mungojerry and Rumpleteaser" whose song in that show is my favorite!)

Boldly, I typed it in, claimed my Blogland identity, and didn't stop blogging from that moment on. 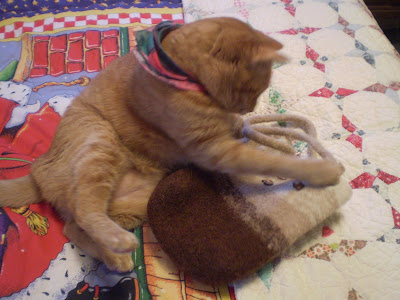 I don't know why I never noted that spell-check kept questioning my spelling. Or why, when I googled myself, it would say "Do you mean 'marmalade'?" 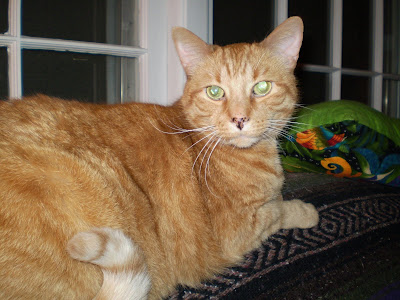 Basically, I'm a pretty good speller -- but not that day. And naturally, I picked probably the most visible platform on which I could ever choose to write. And while it's not so bad a typo as "pubic television" (and yes, it has happened, but not by me), it's still a little embarrassing. I suppose I could change it, but maybe now I think of it in the way people who say "Kool Kats" or take a perfectly easy to spell "Sara" or "Sarah" and turn it into Sarhrahe (the "e" is silent).

So, share your blog story -- and don't forget to link it to Ruth's -- you may learn all sort of fun stuff today! 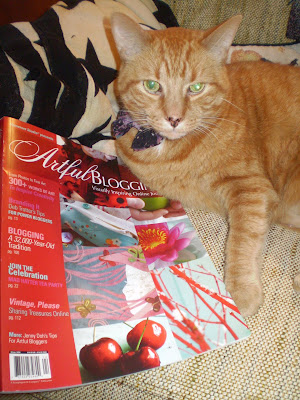 (And to learn how I named "Chopsticks and String" head over there!)
Posted by Jeanie at 1:00 AM

Ha, I wondered if I was spelling Marmalade wrong! Glad to know it was you, and you're right, you have to change stuff to make it your own, so that works.

You didn't get the NEWS flash! I posted after the first invitational that there will be NO AWARD!!!! I am so sorry to disappoint you, and if you wish to withdraw your participation I will claim that I did notify you, and I'm sorry you missed it. :D

(But if you really want that lovely image of the elegant woman christening her blogship, be my guest.)

Thank you, Jeanie, for your story!

Great Story. Mccavity the Mystery Cat is one of my favourite poems.

Every time I see Gypsy, I'm reminded of my own marmalade cat, Snoopy, who was with us for 17 years. He was a big 'ol neutered marmalade who thought he was a dog.

Not sure if I'll have time to participate today...

and I'm playing this blog game today, too ~

Beautiful kitty and great name. I love the sound of it. I had a cat named Gypsy but she was not a orange - just an ordinary gray.

Well, you know how my spelling is not so great, so I didn't even notice that it was mispelled.
But I do Love that big Orange Kitty. And I will always be glad that you started a blog!
xoxoxoxo

I have to say that in all this time - I never once noticed the misspelling!
Karla

Great post! I always like learning more about people and how they think. Naming a blog takes a certain amount of thinking....maybe I'll participate, too.

You have every right to spell a name however you want to, so it isn't a misspelling, it's how YOU want to spell it :) Great post.

I am really enjoying this adventure around bloggy land today. Marmalade is this perfect name for that beautiful cat you are holding. It so suits her! changing one letter for your blog was genius, if i hadn't known it was a spelling mistake. I bet it's a bit of a nuisance now to remember to misspell it. Thanks for sharing this story and your adorable cat!

Very interesting, so the name was an evolution over time, and as Linda said, the purrrrfect name for your blog.

But I don't think so.

So, your blog almost got a French name! I write from France, but my blog name is not French! Shame on me!

trials and tribulations leading to a very appropriate blog name.

I had no idea so much thought went into the naming of this blog! And I also never noticed the spelling issue!

I think I will "play", grand award or not! :) Your Christmas tree is GORGEOUS! So old world!

You made me smile on a tough work morning.

Oh, my thoughts are just bouncing around. First of all, you have Gypsy Rose and I have Dixie Rose. Do you suppose they're cat-cousins?

As for Marmelade, that's the way I've always spelled it. Of course, I don't eat it, so I haven't had much reason to bump up against the right spelling.

Except for this joke, which was meant to impress the correct spelling into our mushy little childhood brains:

Question: What did the little chicken say when he saw the orange in his nest?

You know how much I love Eliot and the naming of cats - and soon I'll be posting my cat carols, so you can sing along with Gypsy!

Rabbit Rabbit ... you made me look Jeanie! Google knows everything and I learned two new things today, thank you very much!!!
Such fun reading the origins of your wonderfully named bbb (blogblogblog)
AND how fun you had a dream with me in it ... I blog in my sleep a bit too ... shhh, don't tell anyone!
oxo

Beautiful cat you have ... and fun story!
(I did not even notice that marmelade was misspelled!!!)

Great story - and I'd never noticed the misspelling! Some English major I am! LOL

I love it. I never noticed the spelling. ha!

Thanks for the visit; you have a gorgeous cat!

I love reading how people name things. My spelling is always "artful" so I never noticed that you misspelled marmalade.

Hi..Very nice story of naming your blog (I also thought the spelling was right:) and your cat is Awesome!
I found your lovely blog when searching who else of bloggers may have smth to do with the title "gypsy":)
My story of naming a blog (Gypsy-Village)is simple: I am a gypsy by origin and I also adore village life, so the second part of my blog's name came easily too:)
Well, I will be defenitely back to your blog and hope you'd have time to visit me too:)
Take care,
Zara

Wasn't this a fun thing to do? I loved this post idea, too.