Our family is a lot sadder these days. On Friday -- and then, again, on Tuesday, we said goodbye to Bob Maley, our friend, our family. Family came from Missouri and Massachusetts, Tennessee and North Carolina, Minnesota and Michigan. We hugged each other, we cried, and we even smiled as we shared memories of Bob. 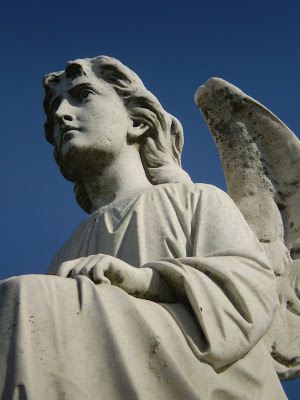 I first met Bob (and Rick's aunt, Carol) when I accompanied Rick to his cousin Eric's wedding a good twelve years ago. From the first meeting, he made me feel like I belonged. They both did. And that's something I never forgot.

In the time since, I've had some wonderful times with the Maley family -- gatherings at their cottage, the weddings of children Matt and Stephanie, and terrific Thanksgivings. Behind all this was Bob (and Carol's) energy, generosity and hospitality. 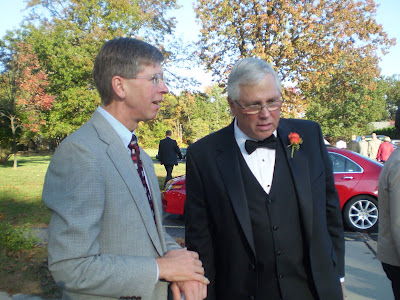 Bob and Carol were as much friends as family, with our age difference being much less than ten years. They weren't your typical aunt and uncle! Bob and Carol were our peers, and the relationship with them was so different than with my own aunts and uncles. So, we've lost our friend, too.

I say Bob-and-Carol almost like it's one word -- and indeed, to me these two seemed so ideally suited, such a team, it's hard to think of them separately. 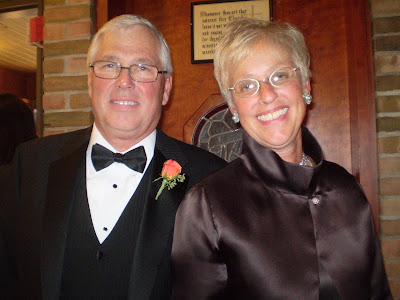 During their 42 years of marriage, they traveled the world enjoying trips with friends and family, yet were divinely happy at their home and cottage with their kids, grandchildren and extended network of friends. 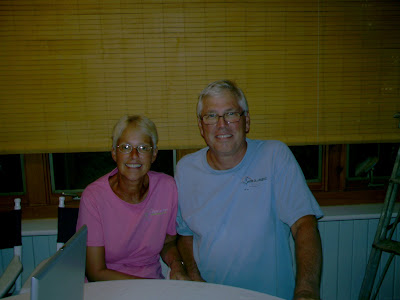 Whenever anyone dies young, before their time, we ask "Why?" And I don't think there's an answer -- or that we'll ever know what that answer is. I know only that there is an empty space in my extended family that was once filled with a smile, a joke, a good bottle of wine, a zest for life and living. 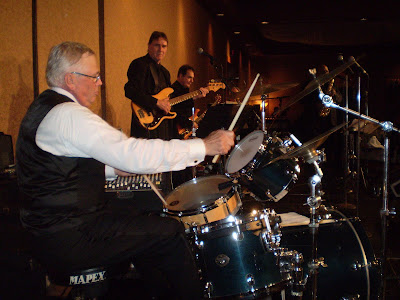 Bob's was a life well lived -- but it was too short a life. It was one of kindness, generosity and great humor. It was one of smiles. Bob loved the arts, and I fondly remember meeting Bob-and-Carol in Ann Arbor twice for dinner and a concert. He was a man of faith, a person of joy. To know he won't be at our future gatherings makes me sadder than I can almost bear. 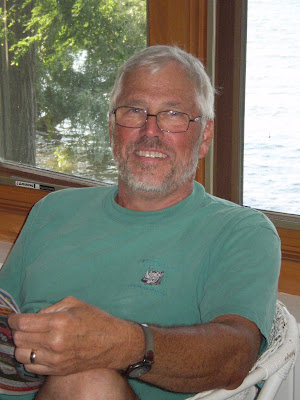 Saturday night, after working the art fair, Rick made a lovely dinner. He had flowers on the table, picked from his yard, delicious chicken got off the grill, and asparagus with pasta. 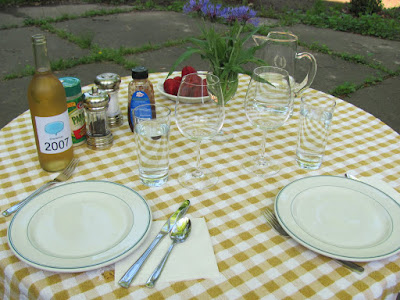 Bob, an amateur winemaker, had given Rick some of his "Black Prince Winery" creations when we once visited. 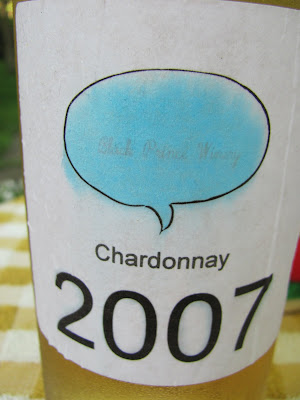 We drank a toast "To the winemaker." It was a Chardonnay, cool and crisp and refreshing.

And he was at our table, joining us -- filling a big spot in our hearts. 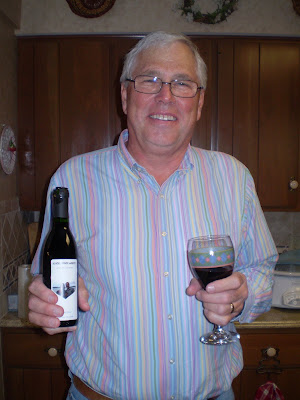 Goodnight, sweet prince. And flights of angels sing thee to your rest.
Posted by Jeanie at 3:38 AM

I'm so sorry you lost Bob. He looks like a beautiful man.

What a lovely tribute to your friend :) My thoughts are with all of you in this loss - good friends are so precious.

what a beautiful tribute you just presented to all of us....

thoughts and prayers go out to you and your family....

Very sorry to hear of the loss of Bob. This is a very touching post that I'm sure he is reading from up above.
Karla

Oh, I am so sorry for your loss of such a great friend! I know it's so hard but you sound like you have such wonderful memories! And I Loved the fact that you and Rick had that bottle of wine in his Memory.
Hope your having a Great Week.
xoxoxoxoxo

I am sad and could cry while reading your post.....He looks so healthy and fit in your pictures, really unbelievable, this loss!!
How old was he??
In Germany we say: The best must go first....
I think it will be very hard to get over his death for his wife.

My eyes pricked as I reached the last image. A fine soul and I'm sure that he will be sorely missed, most especially by his Carol. It sounds like he lived life to the fullest and in the end, that is something we can all aspire to. Blessings to you and to Bob's friend's and family.
xx P&H

What a lovely tribute to someone who touched your heart for all the right reasons. It's so terribly hard when loss visits but at least the good times can make it easier to bear. Thinking of you all.

A beautiful story, beautifully told; too short, though, and I am sorry for the los you all must feel. Wishing you peace.
Love,
Anno

You know how very sorry I am for Rick's loss, and yours. Bob sounds like he was a joy to know. Big hugs and deepest sympathies to you and Rick, dear friend. xoxoJ

I am so sorry for your loss. He sounds like a man who lived life to its fullest and enjoyed himself. It is a reminder to us all. So sorry for you and Rick.

A loving tribute to an obviously delightful man.

this is a lovely tribute to your friend, a bit sad too. I agree, it is always hard when loved ones pass early.

Jeanie - You have made Bob and his life so real. It has been a long time since I saw him or Carol but you have ably described a great man. I am sure the angels were with him and took him straight to heaven where you will again rejoice together. My tears join yours.
Love, Kitty

Hi Jeanie - I am sorry for the loss of your friend. Sometimes in life we have connections with people and you obviously had a strong connection with Bob. He sounds like a wonderful person and it sounds like you have wonderful memories of him. At the end of the day, isn't this how we would all like to be remembered - with only happy memories? God bless x

I recently lost a friend and a coworker to cancer. It's hard. So hard.

With a smile like that, Bob could be nothing less than an angel to guard over you all now. God bless.

A lovely tribute to your friend, Jeanie. He sounds like a wonderful man. So sorry for your loss, and my condolences to Rick, too.
He watches over you now.

What a lovely and loving post. I'm sorry you lost your friend but very happy for you that you had him for a while.

Hi Jeanie, haven't been around in a while (sorry) but just wanted to say my heart goes out to you on the loss of Bob.
Stuart lost his dad on 5th May, I lost the BEST FIL a girl could wish for, sad times.. we deal with it in our own way, laughter and tears have been in abound thinking about him, glad you have such fond memories take care my friend and know that you are never far from my thoughts
hugs, Dawn