The title of Greg's senior art show was "Grow Faster." 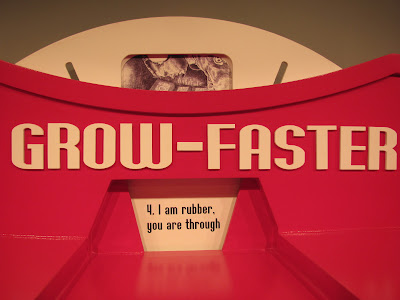 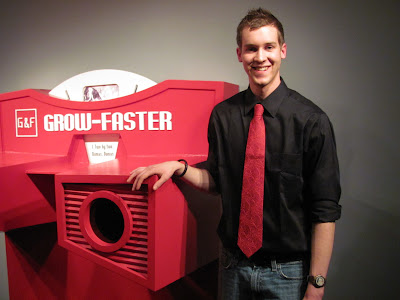 Last Wednesday night we attended the opening of the exhibition, a collection of drawings, which were both projected on the wall in sets of contrasting yet similar themes... 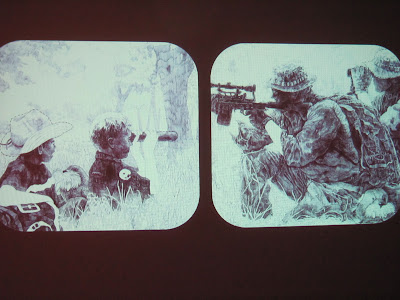 And the originals seen through a giant (and I do mean giant!) View Master. 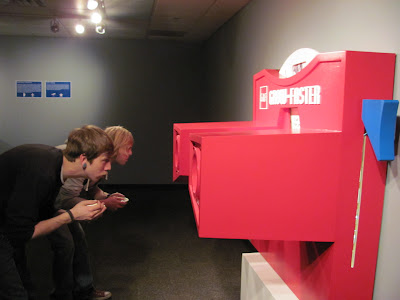 The interactive exhibit was the brainchild of Greg and his "Master" builder, Dustin. 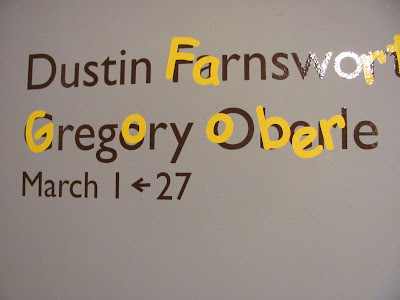 The idea behind it was to show contrasting but related images related to children and war. 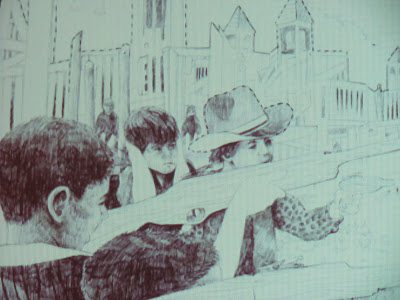 They described it this way. 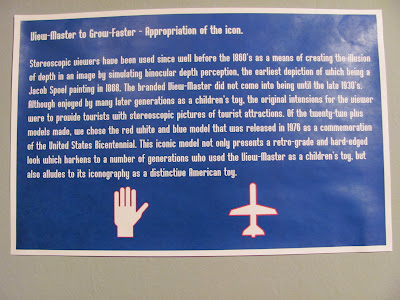 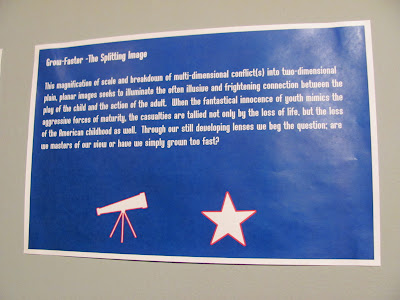 Or, to interpret: As we are children, we play at all sorts of things -- perhaps shooting, or playing war is one of them. 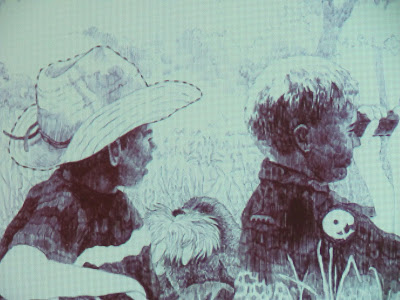 As we grow up, those games can take on a deadly meaning, when war becomes all too real. 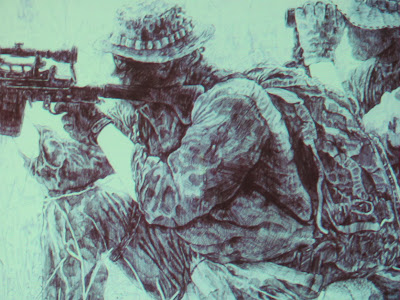 A march is a patriotic parade, with flags unfurled. 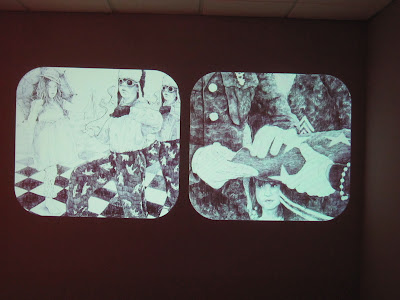 And yet one day that flag is folded with deliberate precision. 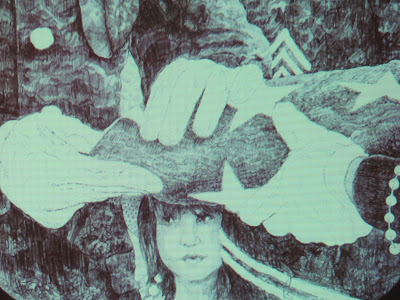 The images themselves -- the originals -- are so rich in lined detail. These photos are of the projections on the wall -- the detail breaks up some (and shooting in low light didn't help either!) 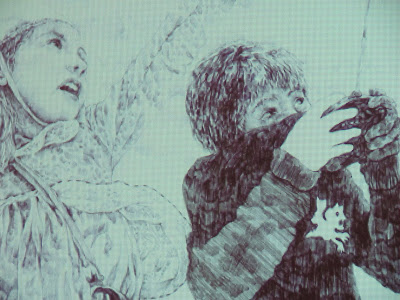 But you get the idea. 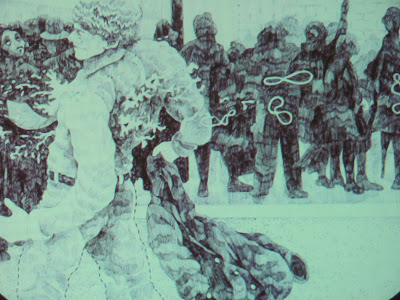 What amazes me most is that this complex correlation of thoughts came from the brain of a kid of six years ago thought primarily about designing cars. 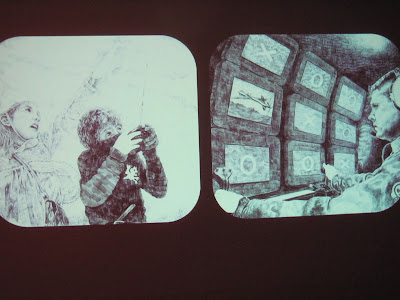 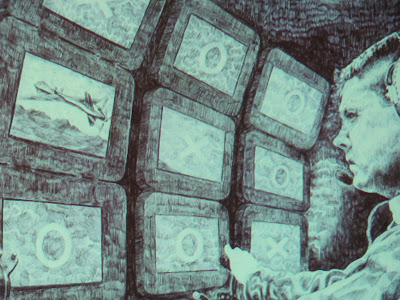 I was one proud person attending. But I can show you who was prouder -- Greg's dad! 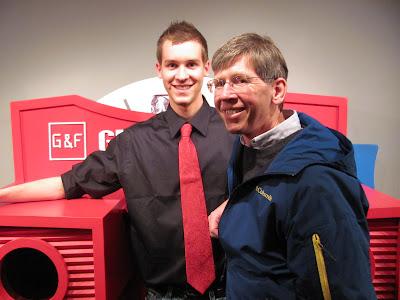 A giant View Master -- looking at the world. What do you see? 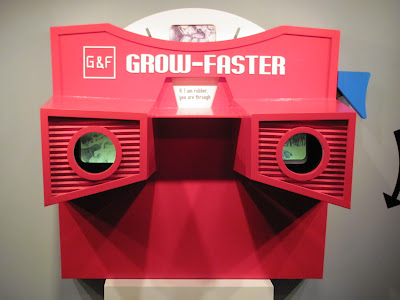 A postscript to all this -- Greg was one of two Kendall students chosen to attend an illustration conference in L.A. this spring. I think his next assignment is business cards and building a website portfolio!
Posted by Jeanie at 6:15 AM

what an amazing kid !
good looking and oh so smart !

That is an amazing exhibit and the children/war theme is very interesting. The viewfinder is a great intro. I remember my viewfinder fondly.
Karla

I did still have my viewfinder and my hubby's(which was identical to this one). Not sure if I threw them away or not? Anyway that is an amazing presentation! His art is wonderful, but then for him to come up with this entire concept and work through how to do it in such a complex and thought-provoking way is mind-blowing! I can see him going far with such talent. You all should be justifiably proud of him.

Darn, I can't see but two of your pictures. I had the same problem at Janet's blog. I will look at them when I get home from work. I can't wait.
xoxoxo

Amazing. You all have every right to be incredibly proud. I'm going to have to return later because five of the photos didn't come through and I want to see them all.

Oh this is just stunning! He deserves to being taking it to L.A. It's so well thought out and the ViewMaster is just a really creative take on presenting the subject. I have to confess to loving my Viewmaster as well but it was Disney related. The proud Dad photo is very good. Great Post.

He is so talented. And good looking. I wish I could have seen the show in person.

The whole show is so thoughtful and unsettling, more so because of the affectionate tenderness for his subjects in every line. Beautifully done -- congratulations on his well-deserved selection to go to L.A.!

That is AMAZING WORK in so many different dimensions. Bravo, Greg! (I'll stand with you in the So-Proud Crowd, Jeanie.) Seeing something so skillfully designed, and so inspired/inspiring, gives me hope.
Applauding from far away,
Maryanne

Bravo for it all, for the idea, for the view-finder, for the wonderful illustrations ... and for posting about it!

This is so impressive. What an incredible concept. I'm sure his Dad was very proud. Congratulations, Greg! Well done.

Wow! I am blown away by this! I KNOW you and his dad areproud! What a talent. He will be a creative force to be reckoned with.
Plkease give him my congratulations!
Love,
Sue

Looks and sounds very powerful and SO original too! Kudos and congrats to the artists!
Your video was great too Jeanie!
oxo

Wow that is amazing. Such talent. Great tribute to a clever young man.

Finally got to see the pictures and WOW! He is one talented young man! I know you and Rick are so very proud! And I am sure he will go very far with all that talent!
xoxxoxoxo

He is just soooooooo talented, Jeanie. I love the concept that they came up with and the subject matter.

Wow! Tres cool - tres talented!! You all deserve to be very proud.
I liked your little video, too!