"If my tongue was long enough, I'd put it right in the bottom of the glass." 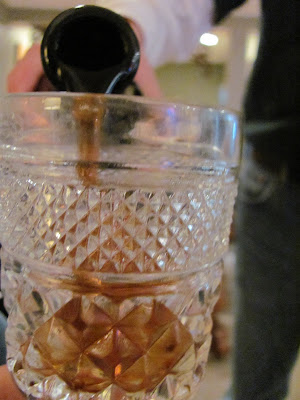 So said Barb as we tasted the first of six sherry wines we would sample during our most recent wine tasting party. And while sherry received mixed reviews (it quite simply isn't everyone's cup of tea), pretty much everyone realized they'd learned a lot more about this wine associated with British drama and an afternoon with the ladies. 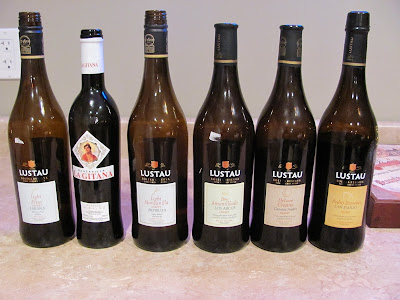 The sherry to which Barb referred was Lustau Solera Reserva, Light Fino. (Most of the sherries we sampled were by Lustau; if you look at the photo to keep the label straight, you'll have to look extra hard!) 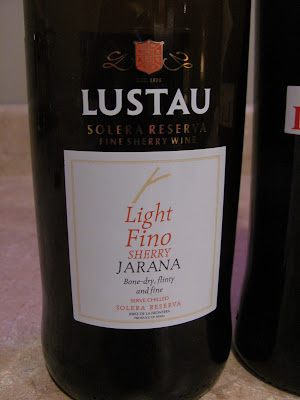 It was a light sherry, pale in color and very dry. Like all the sherries on our list, this was recommended to be served slightly chilled (some are also good at room temperature).

I was rather surprised it was not so sweet as I thought it might be. And while I wasn't one who was gung ho on sherry, it was surprisingly dry and tastier than I thought. Recommended for fish, seafood, suchi and sashimi, it came in at $17.50 (most of the lighter sherries did). 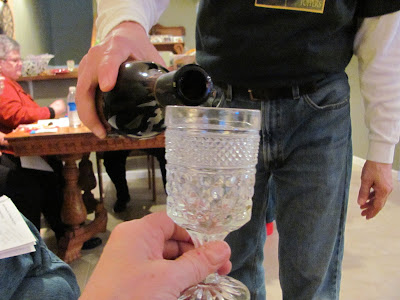 Sherry is a fortified wine and it all comes from Spain's "sherry triangle," which consists of the three towns of Puerto de Santa Maria, Jerez De La Frontera and Sanlucar de Barrameda.

Fortified wine is made when neutral grape brandy is added to wine to raise the wine’s alcohol content. The neutral brandy is added after fermentation and the sweetness of the sherry is determined by how long the winemaker allowed the fermentation to continue. (Thanks for your notes, Dick!)

Next we tried the Manzanilla LaGitana from Bodegas Hidalgo -- also referred to as the "Cleavage Wine" and the one with the fanciest label. 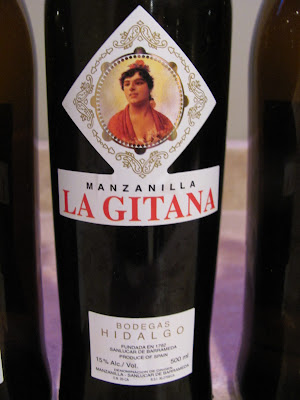 Now, I liked this one better and Rick said it reminded him of an arrow -- sharp, direct. 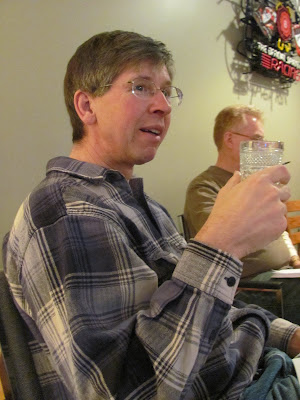 We argued a bit on which was sweeter, this or the first. But we all agreed that it was very dry and spicy with a long finish.

I asked Dick, our wine guide, about cooking with sherry -- Kitchen Rule #1 -- do not use sherry labeled as "cooking sherry." He said this would be a good one, especially given its $14 price, the least expensive of our choices this day. 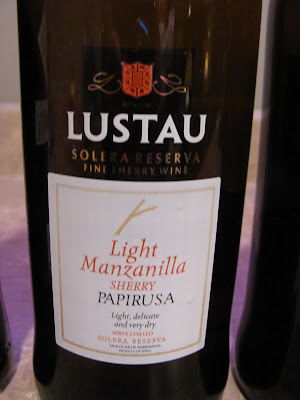 We had another Lustau Solera Reserva -- the Light Manzanilla, as our third wine. It says the aroma is "sea breeze." None of us got that. But it was light and dry, very delicate, and again, $17.50. Dick brought a recipe for Carrot and Sweet Potato Soup from the November 2009 Cooking Light which he said it was quite perfect with!

Now the Lustau Solera Reserva Dry Amontillado inspired Barb to share the story of the Cask of Amontillado by Edgar Allan Poe. 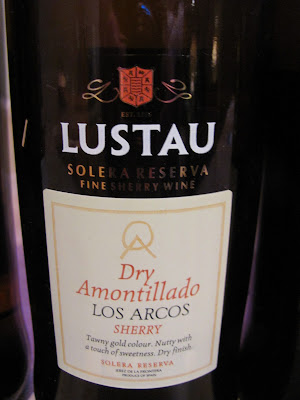 It basically is the story of a man who took his revenge on a fellow nobleman by telling him he has obtained a large quantity of Amontillado and wants his friend's opinion.They go to the wine cellars and wander into the catacombs in search of the wine. He then takes his revenge by chaining him to the wall, entombing his friend alive. The unfortunate Fortunato dies, all for the love of this sherry.

We liked it well enough -- I'm not sure anyone was going to die for it! (Dick does say this is VERY good in cooking.)

Then we sampled the dessert sherries. 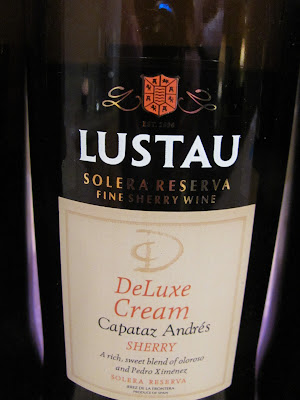 The first, another Lutsau Solera Reserva Deluxe Cream is meant to be served slightly chillded. It uses the sweet Pedro Ximenez grape (all the dessert sherries do). At $18.50, I called it awe-some! We all thought it good, with Clayton stating emphatically, "I would DEFINITELY buy this." (And no, not to be used in cooking!)

Finally, we had the Lustau Solera Reserva Pedro Ximenez, a dark sherry and at $24 the most expensive. 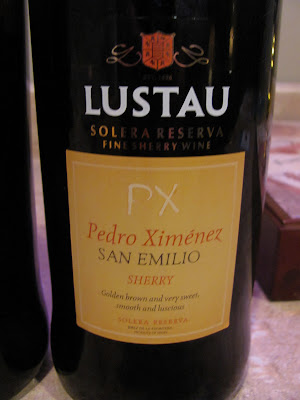 And oh, glorious! We heard, "The very best thing ever!"and "This rocks!" With a pruny fragrance it is the ULTIMATE prune juice with raspberry tones as well.

And while we sipped it before dinner, the best was yet to come when we had a scoop of ice cream with this drizzled over it. Oh, yes. Fabulous!

Our wine tastings always include a pot luck. This time we were at Anne and Clayton's, so they had the main course. 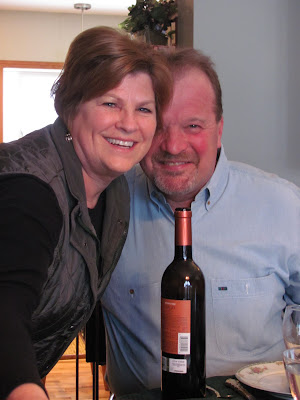 Anne and Clayton made turkey and stuffing and a wonderful pumpkin bread. 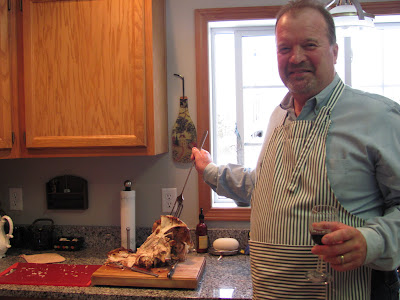 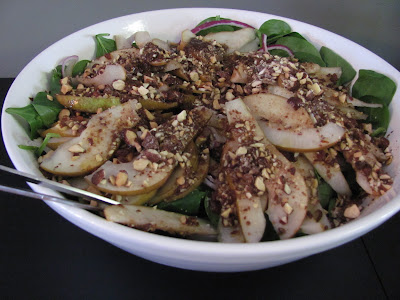 It has pears, almonds, spinach and more. She said that she deviated from the recipe using candy-roasted almonds and some feta cheese with a bit of red pepper for color. But it's a great start and perfect for pear season!

Barb brought a terrific broccoli dish with pine nuts. So festive and delicious. 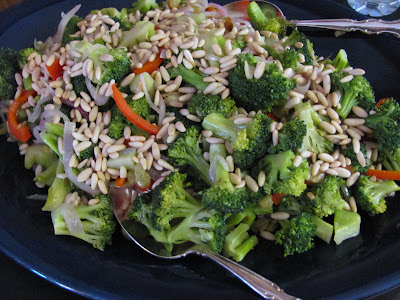 And I offered up a chocolate truffle pie. This post is too long, but if you want the recipe for that, let me know and I'll post it soon!

Needless to say, a good time was had by all! 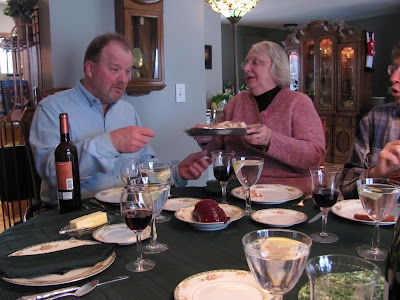 A note from Dick on storing sherry: Sherry will last longer than a regular wine, because of the higher alcohol content, which acts as a preservative. But once Sherry is opened it will begin to loose its freshness. To drink Sherry at its best you should consume the bottle within 2 weeks of opening it. Keep the opened bottle in the refrigerator. Manzanilla and Fino sherry should be treated like white wines and consumed within a day or 2.
Posted by Jeanie at 1:53 AM

What a great party! I don't like sherry...but maybe I just haven't had the right bottle?

Thanks for this info. One of the things I've vowed to myself is to sip sherry while watching the sunset from my new Santa Fe house. But I didn't know anything about sherry. ; )

I know absolutely nothing about wine or sherry....mostly because I don't care for the taste of it! I know that probably means I have no class but it's true. I also don't like the taste of beers. I'm just a water gal, myself!!

OH,,so glad I popped in to read your blog and catch up today. I love your wine reviews,,they are so informative! And now I know more about Sherry,,I always wondered about Sherry and this was so helpful.
Thanks Jeanie,,,another great post!
xoxoxoxo

I love sherry though don't know much about it. A sherry tasting sounds wonderful. Thank you for including such wonderful information on the various kinds you tried.
Karla

These wine tastings always sound like fabulous occasions, and I'm especially intrigued by this month's exploration of sherry. Someone once served an amazing lobster bisque with and equally amazing amontillado, and any reservations I had about sherry were completely vanquished. It's something I think of drinking more in the autumn or winter, though -- a cold weather drink -- usually with smoked almonds or thin slices of manchego (sp?) cheese. Yum. Will definitely have to try that San Emilio... it sounds like an amazing treat.

As for that chocolate truffle pie ... can't wait for the recipe!

Wow, very interesting and educational! I have not tried sherry before but now would have some guidelines so I'd know which to start with.

Jeanie! What great pictures! and people! and wine! I am so far behind in reading you and must catch up. Someone, quick, please put more hours in the day!

How's the Gypsy?
What's your next (art) project? I am filling up my little notebook that you made and sent me! more later--
Oh

Your wine tasting parties always sound like so much fun.

Anonymous said...
This comment has been removed by a blog administrator.
Friday, March 05, 2010

After reading all the excellent descriptions, I almost feel light headed as if I had tasted - and consumed- it all. Didn't think I would like sherry as I am not high on sweet...but now?

If it wasn't 10 am in the morning here - you would have me reaching for the Sherry. Loved this post - very interesting and the meal looked beautiful. Loved that gorgeous glass - very vintage.

Ok, now I'm hungry and want a small glass of sherry please. I do like sherry myself. Haven't had any in years! Hmmmmmm. It's proper for a lady to have a little sherry in the afternoon, isn't it?

it's clear you all had a wonderful and delicious time!

your first line really cracked me up!!!

Happy Weekend to you and yours Jeanie!
oxo

Oh what fun tasting ..fun food and friends is the only way! We did this while in Tuscany a few years ago...toured 3 vineyards travelled by bus..good thing..
great info on these sherry tastings!

I'm feeling a little tipsy after reading this post.

What a fun party!