Stuart Little Is Dead -- and Under My Fridge

NOTE: Stop by my other blog, Chopsticks and String , for a look at the most recent book I've finished, "The Elegance of the Hedgehog."

As I prepare this post, we still have our share of white-stuff, although the rich blue sky and warm sun is quickly melting our snow. By the time this is posted, it may be all gone. (NOTE: As of today, most ALL of the snow is gone! Hooray!)

Nonetheless, I couldn't resist this bit of color outside Rick's office window a couple of weeks ago. 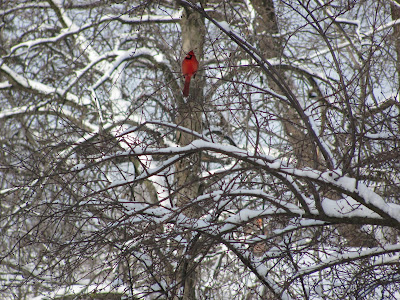 Stuart Little died under my refrigerator last week. I tried to get him out. First I tried to vacuum him out, which was great for the vents; not for Stuart. He was stuck on the corner, so I covered a clothespin and pushed it under, hoping to scooch him out the other side. He wouldn't budge. Then I went in the other way. Same deal. I think he has a wedgie. As in "My head is wedged into the refrigerator base."

It isn't that I don't adore mice. In fact, I only dislike them when they move -- fast -- and startle me. Otherwise, I don't throw up my hands and shriek.

In fact, when Gypsy captured one of Stu's distant relatives last summer (and dropped him upon my command), Stu2 scampered through the the cottage until Gyp and I cornered him under a waste basket, and I took him outside, walked him six blocks away, and let him go in the woods. 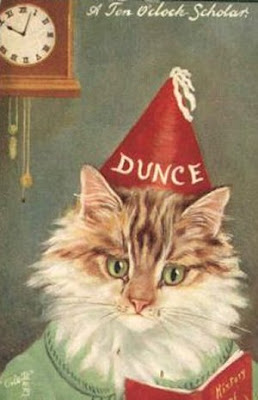 You see, thinking of E.B. White's endearing mouse who slept in a matchbox usually makes me smile, especially when I recall Garth Williams' amazing illustrations.

But I don't like it when they smell. And Stuart has gone through a particularly stinky period. I mean, really, seriously, incredibly, mind-blowingly stinky.

You may wonder why I don't move the fridge and remove Stuart. Well, thanks to the scan I had (where you have to drink 48 ounces of this white liquid over an hour that they have the nerve to call a "Berry Smoothie"), I just found out I have a hernia. Pushing heavy objects is not encouraged. (Note: Since I first prepped this a week ago, I got back my results; no hernia to prevent contact with heavy objects! Hooray!)

I tried covering up the smell with a lovely Trapp cucumber spray. It does wonders in the bathroom.

However, in the kitchen the result was neither fragrant cucumbers or Stinky Stuart, but a rather nauseating mixture of the two.

I'm pleased to say that either Stuart is fading or I'm becoming immune. By the time this post goes up, I'll no doubt forget he was under the fridge.

(Update: Stuart has faded; it's like he was never there! This is good news, because believe me, everyone knew...)
Posted by Jeanie at 3:00 AM

Thta cat image is just fab and your story made me smile this morning. Thank You. If your like me cleaning day may be a while away still.

I'm sure there is some lovely art that could be made with Stuart's bones. At least CONSIDER it!! Love the Cardinal in the snow covered tree limbs. You should just print it and make some greeting cards. I would love getting one!!! hee hee

Theh title of this entry made me LOL. Not because I'm cold, jaded and dislike mice. No, not at all; it was the literary illusion - it was the combination of words.
So glad you worked it out. The Gypsy must have (or should have) been beside himself with a mouse so close and yet...lifeless.
I love the story of Stuart Little, along with all the mice in Ms Potter's tiny books, too. And like you, don't dislike them except when they make me jump. ( I don't like that when suspense movies do that to me, either...make me jump, that is.)

And a wonderful picture that is with the cardinal in the wintry tree!
Oh, there is such glee in seeing Spring coming, feeling it approach, isn't there?
I'm going to run over to "chopsticks" now and see what you thought of "Hedgehog." I finished it, too, a few weeks ago, and want to see what you thought.
more later -
ciao!

I appreciate your sweet attitude toward little Stuart. Poor thing just wanted to stay inside where it's warm and a nibble or two could be found. You make me happy. And Stu probably died happy too.

But wow, when they stink, they stink. Glad you're past that stage!

I'm not quite sure what to say. Fictional rodents are so much more charming and less smelly than real ones.

We had Stuart Little3 living in our house this winter! Dogs are absolutely worthless when it comes to mice. They would watch him run across the kitchen and then go over to snoof his trail. The mouse trap we tried first just snagged his leg, and he was Stuart Gimpy after that. Glue traps, box traps - we tried every expensive piece of equipment on the market. As he ate his way across the kitchen counter and cupboards, I had to resort to poison.
I have no idea where he is right now... I just hope the pups don't drag his mummified corpse out of a closet one of these days...
So glad to hear the hernia was non existant - you have enough health issue last year to last!!!
I haven't read Hedgehog... I will run over to Chopsticks and read your review before my 20 minute blog time allotment is up for the day.
Happy Spring!! :)

Yikes! I'm glad you were able to get rid of him....or her. A mouse under the fridge is not so good.

Too funny! I Love your wit! And Stew will be just another dust bunnie under the fridge,,lol.
Glad you don't have a hernia! Thats good news. Glad your snow is gone too!
xoxoxoxoxoox

"hoping to scooch him out"

Love that word...scooch. It's quite useful and descriptive.

You told this in a delightful way.

The top picture is so beautiful - what a post card shot.

Thanks for the laugh! What a story - and funny written :-))

mice are cute and sweet
OUTSIDE that is ;)

fun read as always Jeanie!
I never cease to get excited when I see a cardinal, especially against the winter scape ... lovely photo!
oxo

My very earliest memory - from my high chair days! - is of my mother slapping a white enamel dishpan with a red edge over one of Stuart's ancestors under the kitchen sink. He's gotten his tail caught in a trap and was dragging it around. She wasn't about to cope - just wanted to corral him until Dad got home from work!

Those poor little field mice. It's just hard to make a living these days!