What Was Missing This Thanksgiving

It wasn't until Wednesday morning that Rick and I decided we would make Thanksgiving dinner (rather than drive to his brother's in Grand Rapids.) He was pretty tired and knew he had a long drive to Missouri on Friday; I was just tired. The boys were with their mom. A quiet dinner would be good.

That evening my friend Judy invited us, friends Mike and Kate, and Judy's wonderful daughter and her guy, Dick's parents and next-door neighbors for a small, informal potluck. Subs, dessert. I'd bring the salad bar. So, when I stopped at the market on TG Eve to get my veggies, I picked up a turkey breast to supplement my make-it-easy dinner the next day.

Judy's home is always festive, the mood was warm, loving, grateful and cheery. Through the course of the evening I learned both she and Dick and Mike and Kate (who had celebrated early with their children the weekend before) had no solid Thanksgiving plans. Hmmm. 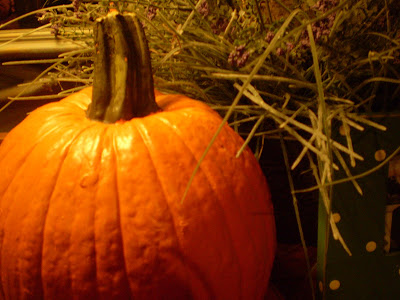 I've been pretty hesitant to commit to anything in recent weeks. Between my broken rib and Rick's crash recovery, we aren't the most energetic couple on the planet. And the last thing I wanted in my world was stress. It was a non-starter.

But we had this food. I was going to cook it anyway. What's a few more potatoes in the mash or using all the stuffing crumbs instead of half? Why not bring up six turkey plates instead of two? And with a couple of calls, we had a plan.

You need to know this about me -- I am a control freak. No one thinks so and they're often surprised when I say so. But when it comes to holidays, I like plans. Timing. Specifics. Party favors. I don't like it to think of myself that way. But it's there.

So, this "spur of the moment" thing was different for me. And it was wonderful.

I pulled out a bunch of stuff from the closet and art room for a centerpiece. My new gourd, the tablecloth, a basket, some raffia, some craft leaves, candles. I bought flowers the night before. Twenty minutes. Centerpiece. 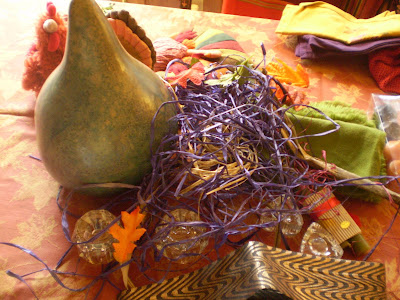 Dishes had been carefully packed last year and didn't need more than a cursory wiping. Same with the silver. And then came mom's crystal.

I have long believed if you have it, use it. And I'm pretty darned good at using things that would cause at best a heartbroken gasp and at worst a flood of tears of damaged. But I'd never used mom's crystal -- almost paper thin with a mulberry etching -- one she had trouble finding replacements for in the 60s. I was too afraid. 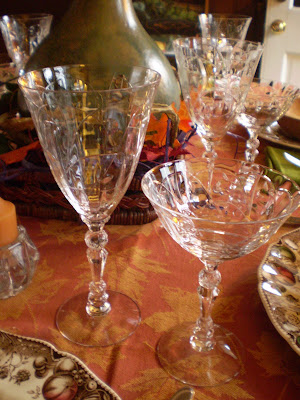 The person I love most in the world and the friends who offer so much richness in my life were coming. If I'm going to break crystal, I want to do it with them. Maybe Rick's near-brush reminded me that I could live my life without using those glasses, and oh, how sad that would be. In many ways, with lots of thoughtful layers, doing so was one of my most meaningful moments of the day.

The menu? Well, apart from the turkey, I had all the stuffing "stuff." 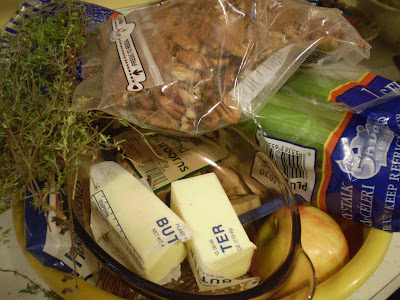 Leftover greens and veggies from the super-salad from the night before (just enough for six!), green beans, jazzed up cranberries and apples (next year I'll go back to the regular relish), mashed potatoes (no milk; low-fat sour cream, butter and compliments!), bread I'd picked up at a bake sale and the homemade apple pie from the high school band fundraiser.

Rick and the guys grilled the turkey down at his place, while at mine Kate's gravy bubbled, the table was ready, the food was in the oven. We sat around the table in my tiny dining area and laughed, talked, shared. And it was wonderful. 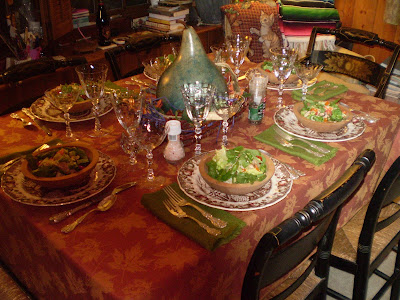 My friend Richard (of the Crystal Project for longtime readers of The Gypsy) came by for dessert as we were talking about things over the course of the year for which we were grateful, something I sure many families in our communal world also did. The conversation covered our personal gratitudes (not just the obvious, like "Rick didn't die") but the shifts in our lives for which we were grateful. 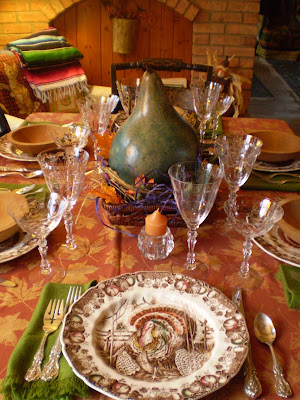 Joy after great sadness. A gift. Reconnecting on a different level with now young-adult children. A gift. Connections with friends we'd not seen in a long while -- or perhaps have never "seen" and how they changed our world. A gift. Seeing how the trials so many of us have experienced directly or indirectly this year because of our nation's challenging economic issues has changed our focus into what really matters, how we live our lives, save, make different consumption choices, reframe our values. A gift.

And Richard, who walked in on the middle of this, may have made the most quietly profound observation of all. Gratitude brings with it more gratitude and more for which to be grateful. And sometimes, in the end, the bad isn't always all bad -- even if it takes awhile to find the good. Oh yeah.

It was the nicest Thanksgiving I have ever experienced. And what was missing?

The stress. And the party favors.

Rick is off to visit his family and since my doc said riding in the car with my ribs would be a bad thing, I'm here with the Gypsy for the weekend. My body is telling me to stop. Don't overdo. Rest. It's time I listen.
Posted by Jeanie at 8:10 AM

I love how sometimes the unexpected brings the best moments to remember. Glad your Thanksgiving was a success. Now take it easy and have your little furry boy snuggle up to you.

This sounds like such a wonderful holiday! I'm glad you spent it as you did. And I agree that the spur of the moment gatherings are much better than the planned ones.

I'm a low key, fly by the seat of my pants kind o' gal, anymore. Thinking back to when I used to get all uptight about parties, I have no idea what I was freaking out about.

What a lovely story of your Thanksgiving, Jeanie. And.... a perfect reminder, not so much about gratitude, but about priorities. (Plus the importance of being kind to self.)
Hope you have some good books for the weekend, and your rib is healing! Qu

way to go....a non stress holiday just doesn't happen very often...but the older I get and the more I give up control....{I'm a control freak, too} the better it gets....

just don't go breaking anything else though, K?

hoping you are rick are feeling better everyday !

Love the festive wallpaper in the background. And as usual the photos are so beautiful. Sounds like you have a nice t-day!
k

It was a wonderful way to celebrate, and I feel blessed that I was included, dear friend. xoxo

Ah, this sounds like the perfect way to celebrate the holiday. And what a gift for you - a control freak! - to realize that everything needn't be planned to the hilt to be successful. Those kinds of lessons are rare - a gift indeed.

What an absolutely divine table - looks like it belongs in a magazine shoot. Hope you had a great day.

"If I'm going to break crystal, I want to do it with them." That is profoundly perfect. As my sister taught me to say when something breaks, "there was no life in it." Rick's accident, and your sensitivity, made your Thanksgiving the best ever. I am like you, needing days and weeks and the mental prep before any event. Yet the spontaneity of your Thanksgiving is testimony to how it can be when you or I let go. Our best Christmas was at my family cottage with Don's family when we bought a $7 tree at the local grocery store and decorated it with whatever we could find in the cottage, including playing cards from an incomplete deck. It was brilliant.

Sometimes (most times?) less control means more fun in the end. How nice that your mom's crystal was used by this special group of people. And butter....one of my favorite foods:) Glad to see it as part of your post.

Jeanie, I'm so glad you had such a lovely time. It IS hard to use the good stuff isn't it! But it's so important to do so. Your table looked wonderful. Take it easy - rest up - more good stuff is ahead!

Much love and many blessings
Love Jeanne

I really appreciate your visits and kind words

It sounded like a very delightful and stress free day for you and your company. Any time there is no stress in my life is definetly a celebration!
xoxoxoxoxo

Beautiful. Does it get any better? Thanksgiving is always full of love and good food. No stress allowed! I was so happy reading this. xoxo

Beautiful. Does it get any better? Thanksgiving is always full of love and good food. No stress allowed! I was so happy reading this. xoxo

What a wonderful Thanksgiving!