Recently I've been watching The Story of India on public TV. Well, watching when I can. It's a six-part series, two hours over three weeks (Mondays) and that's a bigger commitment than I can make right now. But I've been checking in. (It's an outstanding series, and one of the few times I've really wished I had a high-def telly!)

I find India interesting in part because it's where my dad spent his military service. 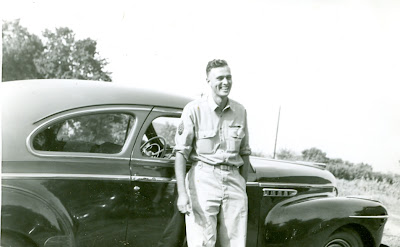 In a somewhat futile attempt to clean the art room, I went splunking under the desk and found a box with photos and letters he'd written.

I also found (again) his photo album from that period. 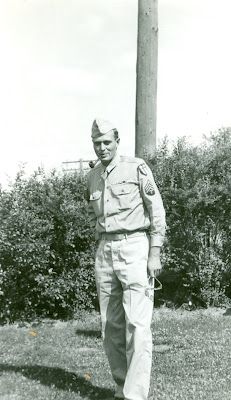 Photos of the Indians in pose...and those who look caught unaware. 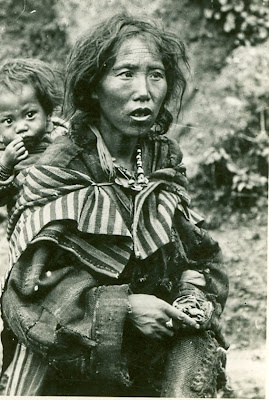 And at work, here on a tea plantation. 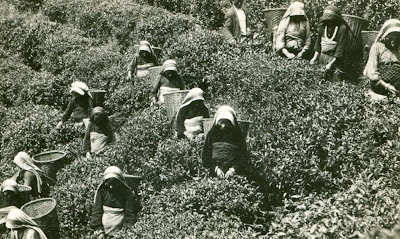 He spoke of his leave in the mountains where the tea plantations were, and of the farms in the north. 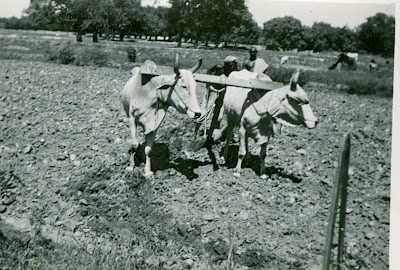 He also mentioned spending time with the daughter of a tea plantation owner, whom he described in a letter to my grandparents as being very easy on the eyes. (I wish he'd had a photo of her -- maybe I'll find one when I spend more time with these books!)

My parents were both fairly skilled amateur photographers and even as a child I remember posing for my mother against a backdrop with big lights. Spending time in the darkroom watching the images magically appear on the paper always fascinated me and while it wasn't a skill I picked up, I still mourn the loss of the magic of film (although the computer now seems to hold that magic.)

The point is, in discovering these photos, I realize that this was an interest that my dad developed long before he and my mother met. And some -- like the photo of the Indian woman and her baby, the snake charmer, the beggar -- almost seem to have a documentary-like quality that I find intriguing, especially given his innocence of the world at that time.

(Another thing I love about the originals is that they are all very small -- wallet sized. Yet when enlarged, really quite clear.)

His camera picked up sacred cows... 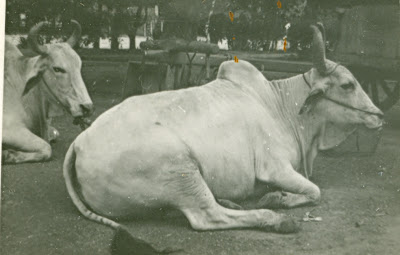 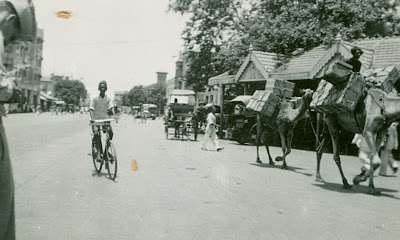 Even the street beggars were captured in the camera lens. I wonder -- did he take this as a shocked young man who hadn't seen this before -- something to show the folks at home? Did he see it as a social commentary? 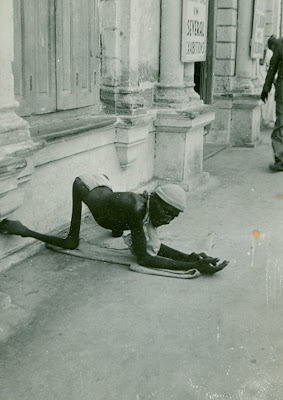 My dad always had a profound sense of compassion for others as well as a sense of acceptance that struck me as unusual during my time of adolescence. Beautiful, but unusual. Still, it wasn't until he died when the first African American to move into our all-white-bread neighborhood came to the funeral home that I realized how this made an impact on others.

"Your dad was the first person to come to come to our door and welcome us to the neighborhood," he said. "I will never forget his kindness."

Did this farm kid from Michigan learn that people were people, whether they looked like you or not, during his time in India? It sure didn't hurt.

This is one of my favorite photos -- the snake charmer! I can imagine him being fascinated by how the charmer was able to lure the cobra from his basket. 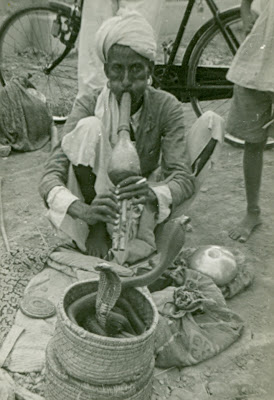 (I know this photograph fascinated me as a child. I sometimes wonder if he took it just to send my grandmother into a tizzy -- she had always been afraid of snakes, one of the few phobias that may have rubbed off on me a bit!)

Although I know he became very ill while there (malaria and something that popped up now and then in later years), he really found his time in that country fascinating.

It intrigues me, this look into the images that affected a man so many years ago. He was probably in his late 20s, maybe 30. I can't help but wonder if the young men in Afghanistan are experiencing the same things, and will their encounters with people different from themselves lead to acceptance and understanding as they age, or will the terrors of war override these experiences. India wasn't a hotbed of combat when Dad was there, and I'm not sure as a communications specialist if he ever even saw combat. That has to present a different image of a country.

Yes, I have some things he brought back with him -- an ivory box with elephants; two rosewood (I think) boxes he gave my grandmother; a prayer wheel, tarnished with the passing of time.

But the memories -- those are his. And how I wish I could ask him more about them. 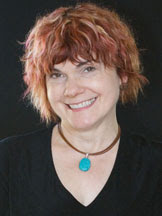 Her camera captured the people, the colors, the places -- and (if you visit her site) you will see they really look much the same.

An ancient civilization that has since become a highly industrialized nation in some respects -- and in others, anything but.

If you're interested in the series or the other features on PBS' website, stop by. Another two hours airs next Monday night at 9 p.m.
Posted by Jeanie at 9:23 AM

Jeanie, this is beautiful post-- you have a real gift for putting words together with pictures! India is a country that has always fascinated me -- your review, together with this narrative about your father's experiences, makes me wish we had television reception. Guess I'll have to wait for this series to come out on DVD.

I loved those pictures. But more than anything, I loved what the neighbor said about your dad. It's too bad that you sometimes have to wait until someone is gone to learn something that tells you so much about their character.

Your father's photos are amazing, poignant, telling, insightful and beautiful.
So many stories. So many important stories are told in them.

You've got me thinking - yes, I wonder if our troops abroad are able to capture real life, how they see things ...

And how different a world it is now (including the cameras!)

Jeanie, this was a most compelling piece. How wonderful that you have all these photos from your parents.

Fascinating post and photos, Jeanie, and things I never knew about your parents! Love both- and Jane's link, too, who I've been planning to write about in my fav photo posts. Wonderful! xoJ

I love this post....and especially your very sensitive words....and your neighbors memories about your father....
Very interesting...and I am astonished, that you have so many wonderful pictures of your and your parents past.

Another wonderful post. I love all the pictures and your words. ((hugs))

I have always been struck by how the simple black and white film of the 40's gave such clear and easily translatable into larger pictures quality. Boy was that a different time.

A Very ProFound PosT ~ beautifully written around the stunning photographs. I was drawn to your blog by your blog's title and I am so glad I found you! Many Blessings and I hope to visit again soon! Katie

What wonderful photos to have - a gift from the past.

What a fabulous set of photos. You are so lucky to have them, and to have such a wonderful father, who obviously greatly impacted who you are.
This was a great essay, Jeanie.

oh these photos....and thankfully you are treasuring them and sharing them with us !!!

I am loving this program! (Indian food is my fav.) I would love to go one day with the hub, but I don't know if I could be on a plane that long. I am fascinated with their culture. I forgot the name of the man who wrote such wonderful things on the pillars (perhaps the first in the series?). Such an interesting history.

Jeanie, what a treasure you have in your dad's photos! Thanks for sharing them and your story him. Would make a great journal or altered book!

What wonderful photos and how great that you have them still to enjoy!

What a fantastic find! Your father's photos are very special and how wonderful you can learn more about a place where he spent time through the series. I've seen it on BBC here and it's terrific!

What an INCREDIBLE archive of family history you have there.

Holy God, Jeanie, the street begger is a jaw dropper.

What a wonderful post, and tribute to your father. He sounds like someone I would have loved to have known.

WOW what a brilliant post all thanks to your handsome (tall drink of water I am guessing)father. I must say the image of the mother and child is not what I expected of India, even the tea pic has a more Japanese feel to it in my mind. The camels in the street and the snake charmer oh my! I so enjoyed this post and your father's photos! What you wrote is really beautiful Jeanie, thank you for sharing :)
Thanks also for the link to your photographer friend...more Wow!