Four years ago I wrote THIS POST about a mural our Number One kid, Greg, was doing in Lansing's REO Town, an area that has been in revitalization in recent years. At the time Greg did the original mural, he was 29. 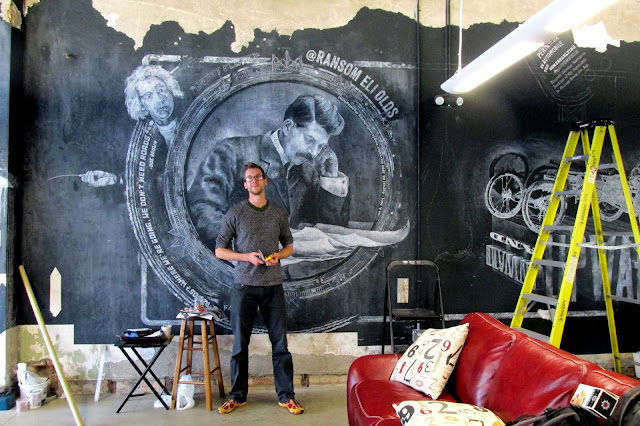 In the intervening years, the building has changed tenants and the new law firm in the space, McClellan and Anderson, wanted some touch-ups and additions to the mural. 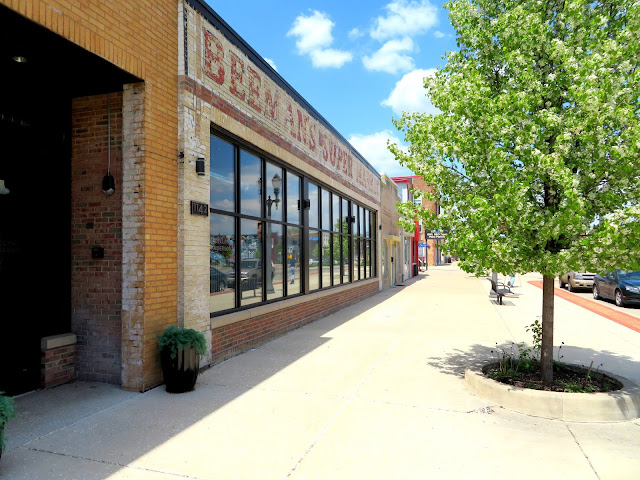 Greg was happy to oblige!

The mural covers what was once the side wall of a local grocery store. Its later tenants subdivided the floor space for offices.  Here's a look at it when Greg was starting several years ago. It doesn't show the entire wall but you get the idea. It's big! 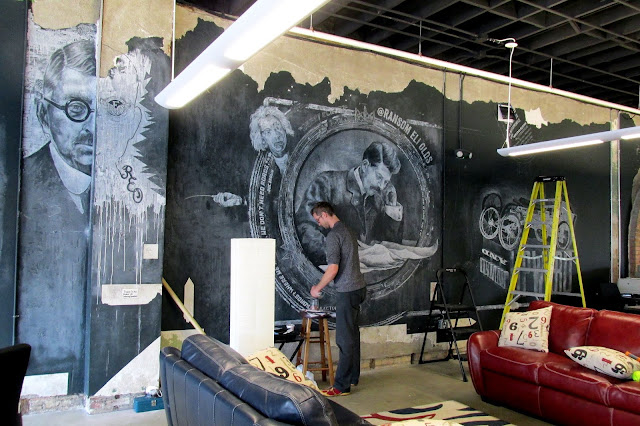 Since the earlier tenants were tech-based, the overall theme of the mural included a good deal related to tech. 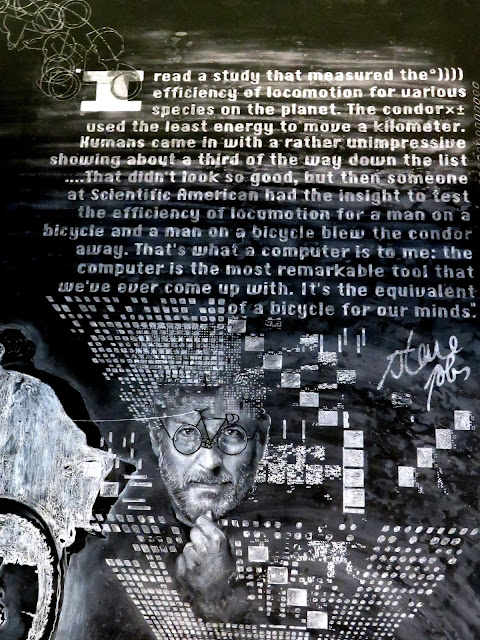 Greg also focused on one of Michigan's (and Lansing's) key pioneers, R.E. Olds, who invented the Oldsmobile. His other company was REO Motors, which was located in this part of town, a section of Lansing now known as REO Town, which is in the process of revitalization. 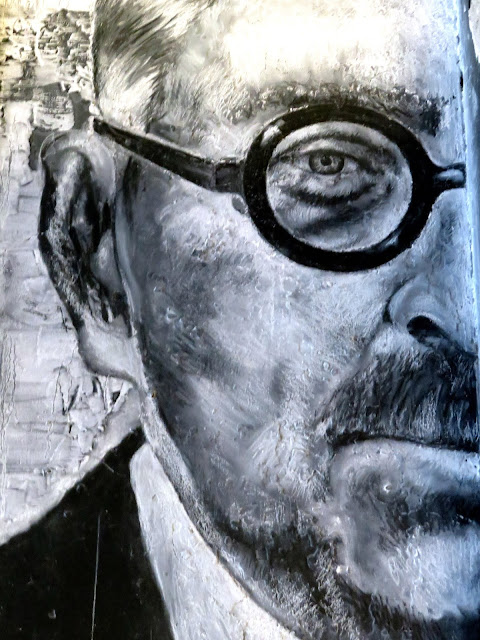 Olds was the first person to use a stationary assembly line in the automotive industry. Henry Ford later used the idea of a moving assembly line to manufacture cars. 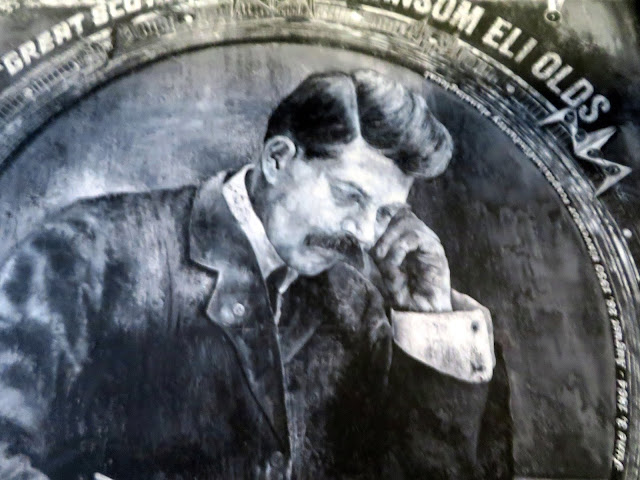 So, Olds also played a key part in the mural, as well as the topic of transportation, its past and future. 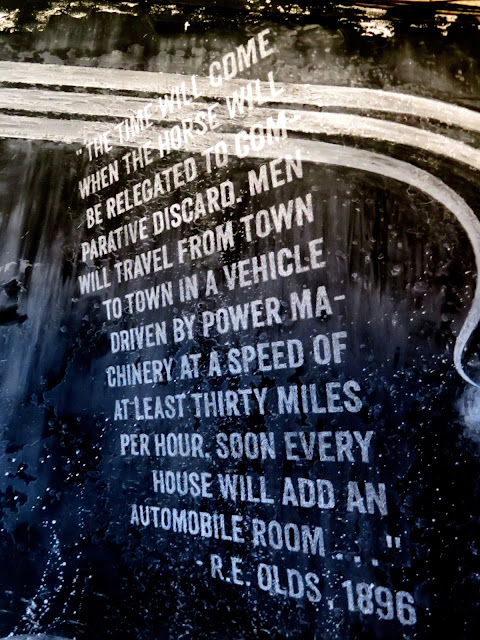 In the mural, we see a woman in her carriage next to an astronaut, the space traveler. 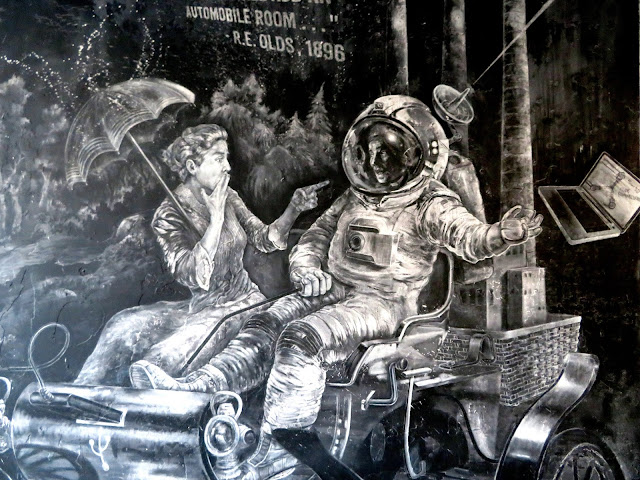 We note the words of "Back to the Future" character, Doc Brown. 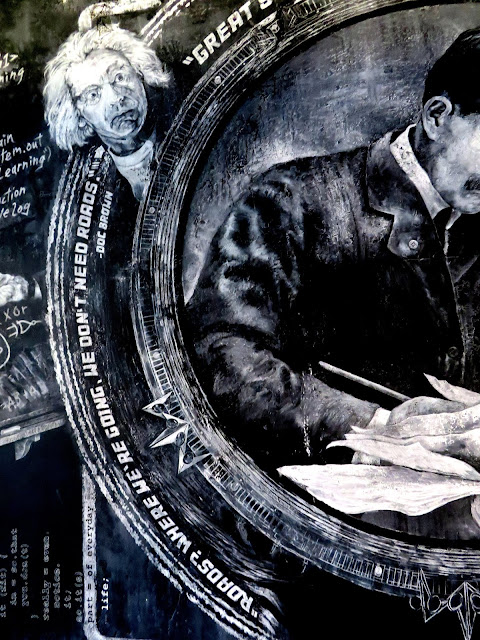 R.E. Olds was also a local philanthropist and a founder of several companies, including one of the area's best-known banks for many years called Michigan National Bank. It was housed in the Olds Tower (1931), still the tallest office building in Lansing (now Boji Tower). Olds was the primary financier of the tower. When completed in 1931 it was, and remains, the tallest office building in Lansing. In Greg's work, an unsightly wall fixture becomes the head of a robot, who is popping out of the top of Boji Tower. 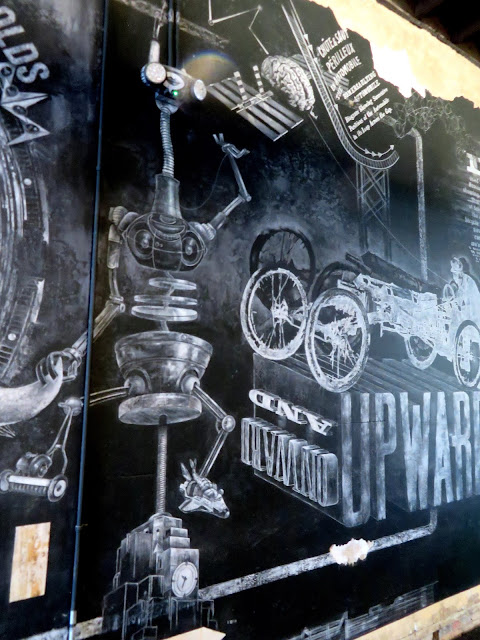 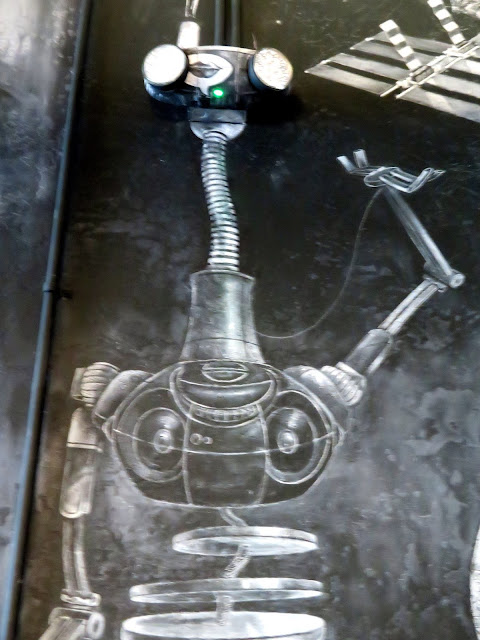 New portions of the mural done this past month include a live look out from the window to capture the new power plant building and towers. 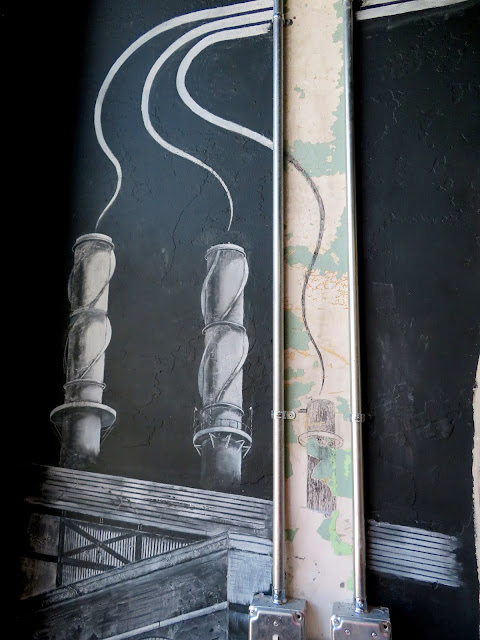 He said he worked "live" for this one, drawing as he looked out the adjacent window. Over the doorway, Greg added this piece of art done from an original REO advertisement.

The building also has a brick arch that was covered over. Greg added the train roaring through, as though it is a tunnel. 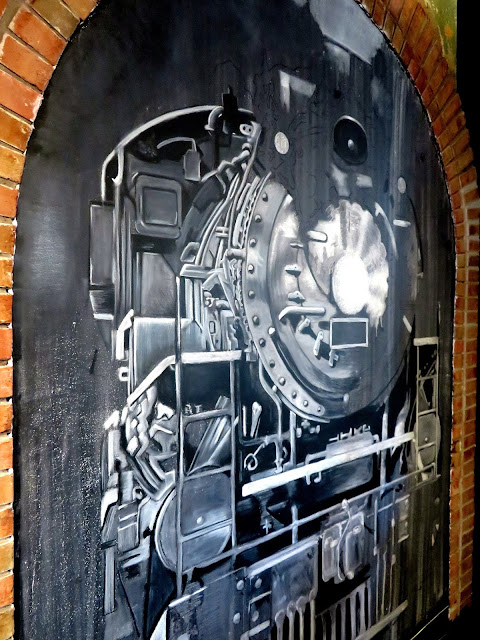 This part was still a bit unfinished when I took the photos. You can see the lines for where the smoke and additional detail is to be added. 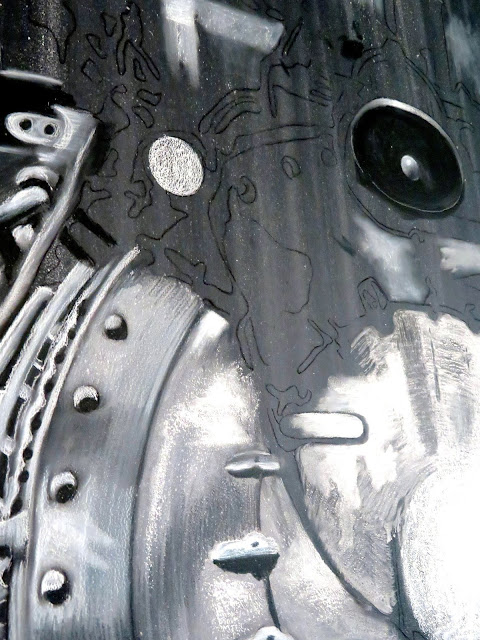 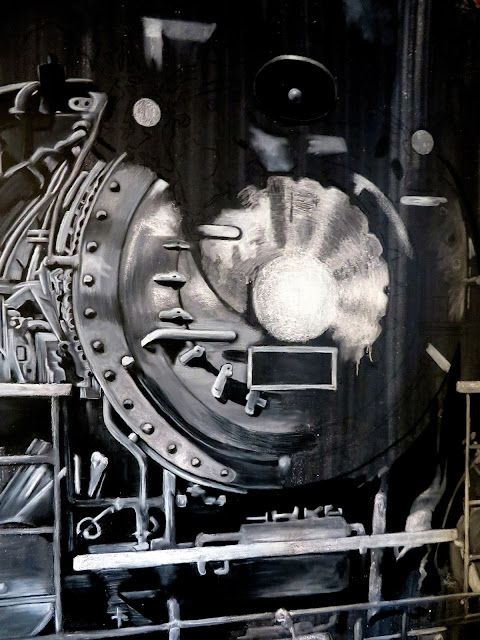 I have to say, that when we take a look at this mural, we're pretty darned proud of this guy! 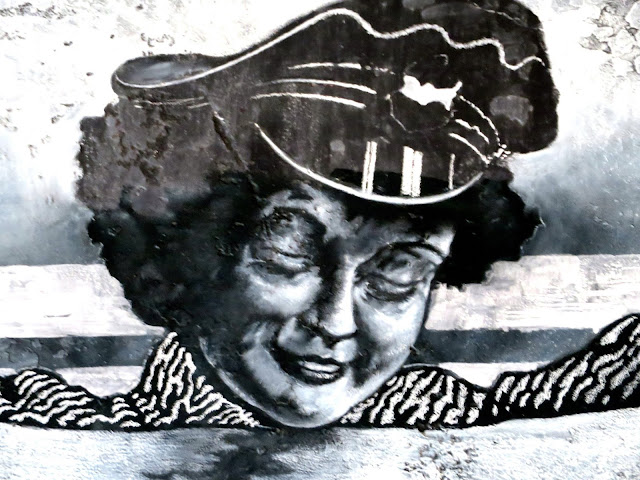 He's off to L.A. to find life in the art world there. So, if you know anyone who might need a mural (or smaller work!) please pass the word! His portfolio includes several restaurants, CD covers, posters, and more! He's willing to travel to the work, too so don't let location be the issue! You can check out more of Greg's art or follow him on Instagram HERE. 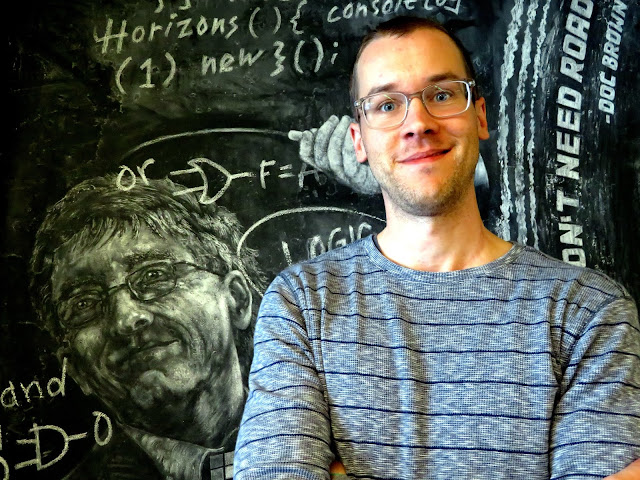 After all, we do want him to be able to eat!

Your son created a brilliant mural and I wish him great success in his career. I did not know about Mr. Olds before reading your post.

Fantastic mural BIG wow, love everything about it. Good luck to Greg in LA. Hugs, Valerie

Hello, congrats to your son. The mural is awesome. I wish him all the best in L.A. Enjoy your day! Wishing you a happy new week!

Bravo to him! Amazing work.

Great talent. I hope he is able to exploit it to its fullest. He would probably be much more in demand in Europe where murals are more commonly part of urban landscapes.

Wow, that is truly impressive!!! It must have been a lot of work to create such an intriguing mural with so much interesting detail. I can't help it - the robot reminds me of ET!

I love Greg's work. The lady and the astronaut in my favorite. I will cheerfully follow him on Instagram.

What a talented guy! I hope he likes it in LA.

Wow! Great is so talented! That is so awesome that the new tenants have kept the mural.

What a talent! So much detail and so much to investigate in his work.Good Luck to Greg in LA. I must look him up on Instagram!

He is a great artist! You must be very proud. Honestly, that looks amazing!

30 miles per hour! And an automobile room. Tee hee. :) Totally calling our garage that from now on.

Question, along the lines of the Oldsmobile....REO car. Is that where the band REO Speedwagon got their name? I am going to Google.

This was great. Learned something!

In case you are curious too!

They named the band REO Speedwagon, from the REO Speed Wagon, a 1915 truck that was designed by Ransom Eli Olds. Doughty had seen the name written across the blackboard when he walked into his History of Transportation class on the very first day they had decided to look for a name. Rather than pronouncing REO as a single word as the motor company did, they chose to spell out the name with the individual letters each pronounced ("R-E-O").

Such an interesting post...thanks for all the info and great photos.
Well..I am trying very hard to keep up posting on my blog. It's just so much work..I started blogging in 2007 and am just getting tired of trying to do more than 2 or 3 a month.
Instagram is so much faster and not nearly the hard work....

Wonderfully artistic. I hope he can get good work out West.

WOW, what a marvelously talented person, handsome too, and I bet very kind! Great post Jeannie! :-)

Wow, this is excellent, creative, thoughtful work!
I love them all!

I love that he incorporated the tech aspect, the Olds aspect, and the train coming through the arch. I hope Greg makes it in LA. I have some friends I can contact about CD covers, but I doubt they need murals.

He is so talented he soon will be working for a film company or something along those lines. Truly amazing work!!

Wow! They are amazing. A very talented artist.

...there's a lot going on in black and white.

You missed only one little detail: REO Speedwagon (one of my favorite groups) was named for the REO Speed Wagon, a 1915 truck Ransom Eli Olds designed. And when I looked at the next to last photo of the woman wearing the cap, I laughed out loud. Is there any question who the artist used as a model for that one? You've been immortalized!

Wow, that mural is gorgeous and the detail is just spectacular! What a gift he has...

What a fantastic piece of work! I am crazy about it. So many interesting, beautiful, and clever bits and pieces that combine into a dynamite 'environment' whole! I especially love the 'ad' that he painted over the door!
I took a trip to his Instagram gallery - what a wide range of styles! Hope he gets lots of work out there in the big$ city! LOL
Thanks for sharing his art.

Your son is a great artist Jeanie, obviously takes after you.
Fabulous mural! Thanks for contributing.

Murals are so effective in creating new environments for cities! And I see so many cities hiring talented muralists to enhance their environments. I hope Greg finds the right place where he can be commissioned to do more of them.

Wow that is wonderful.. he is so very talented.

Jeanie, no wonder you are so proud of him. Beautiful work, artistry must run in the family..I love murals, they are painting quite a few around our little town now..Happy Monday..xxoJudy

Wow! He is so talented! I've enjoyed seeing his work and hearing more about him. I'm wishing him the very best!

Fantastic to see this mural, your photographs are amazing.
Many good wishes and good luck too, for Greg in LA.

Greg is very talented and his art work is outstanding. Enjoyed your commentary, so interesting. When I was growing up my daddy would only drive an Oldsmobile.

How cool! That is an awesome mural, and I wish Greg good luck. Even though with the quality of that mural, I should think success will follow! Happy new week. Hugs-Erika

He does beautiful work. I have met a guy here in Portland that travels around the country doing murals. I guess there are jobs out there since he keeps busy. Greg does amazing work. I wish him all the best.

Oh my Jeanie ,. . . and Rick!
What a talent, gifted, brilliant!
How happy and proud you must be!
Wishing, hoping for many many new opportunities for your son!

I'd be proud of him too.

Brilliant. Absolutely brilliant. He is so incredibly talented. You and Rick must be so so proud! His work is just stunning!!!

Hi Jeanie,
Greg's work is awesome!!! We ought to get him and my son's sister-in-law, Jensen (IG @jensentwite126) together. :) She just graduated with her BA in fine art and creates portraits. Always good to know more artists!

I love Greg's work. Thanks for posting it again, Rick.

I am in awe of this mural!! What incredible talent!! I have featured it today at Thursday Favorite Things -- Congrats! Thanks for sharing it with us.

Wow! You have one dang talented son!!! That is utterly amazing! I'll keep my eyes and ears open, as I live in So Cal, just an hour south of L.A. I hope he does well.
I'm here by way of TFT! We would LOVE to have you come and share at our link party, Tuesday Turn About, via myweeabode.com . The party is open until 12 midnite, CST! Hope to see you there!