Bits and Pieces of my Crazy Life!

First, thank you all for such lovely and kind comments on my "cancer" post. I've appreciated your sharing about those you have loved who have dealt with this terrible disease and follow-up conversations with some of you as well. 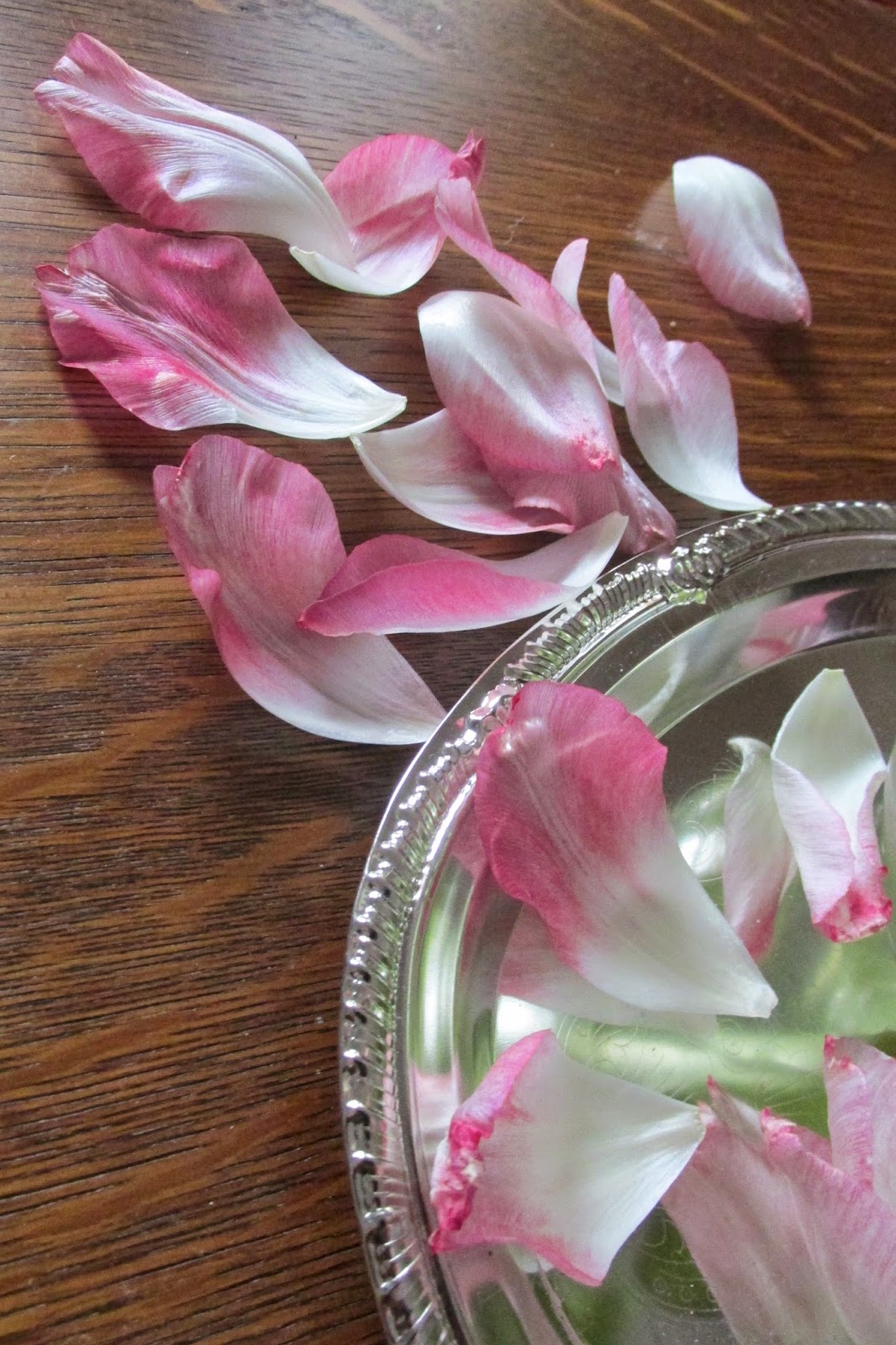 This post has been a bit in coming. It seems like the project is keeping me busier than I thought. Then a wonderful weekend workshop with Jacqueline Sullivan. I'll post more about that later -- still have to upload photos! But it was fabulous!

My friend Suzanne is visiting from Canada this week, which has meant lots of movies and even more good times! We've known each other since high school and it seems as though not a day has passed when we connect! (When she's not bird watching, Lizzie has been camping out on her bed, getting it cozy for her!) 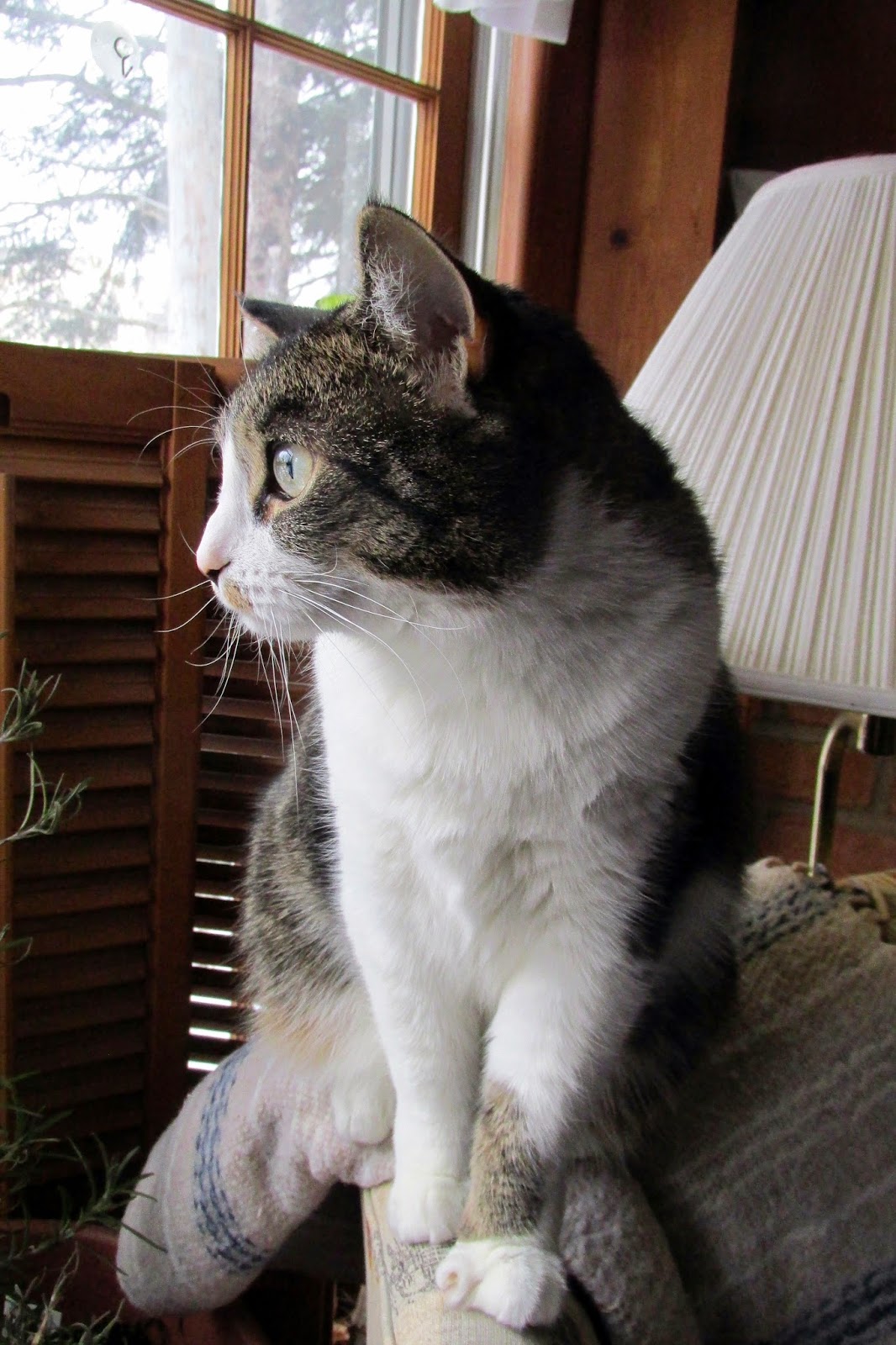 I'd love to show you photos of my Coq au Vin dinner that I made the other night but I forgot to take pictures! Rick called and said he'd made some French baguettes and he thought that a little French food would go nicely with that. I agreed. How about Coq au Vin? he suggested. Sure, that sounds good. (A pause) Are you making it or am I? Well, it turned out that he had projects up the wall so I said I would -- if he'd send his recipe. I knew I couldn't tackle Julia! 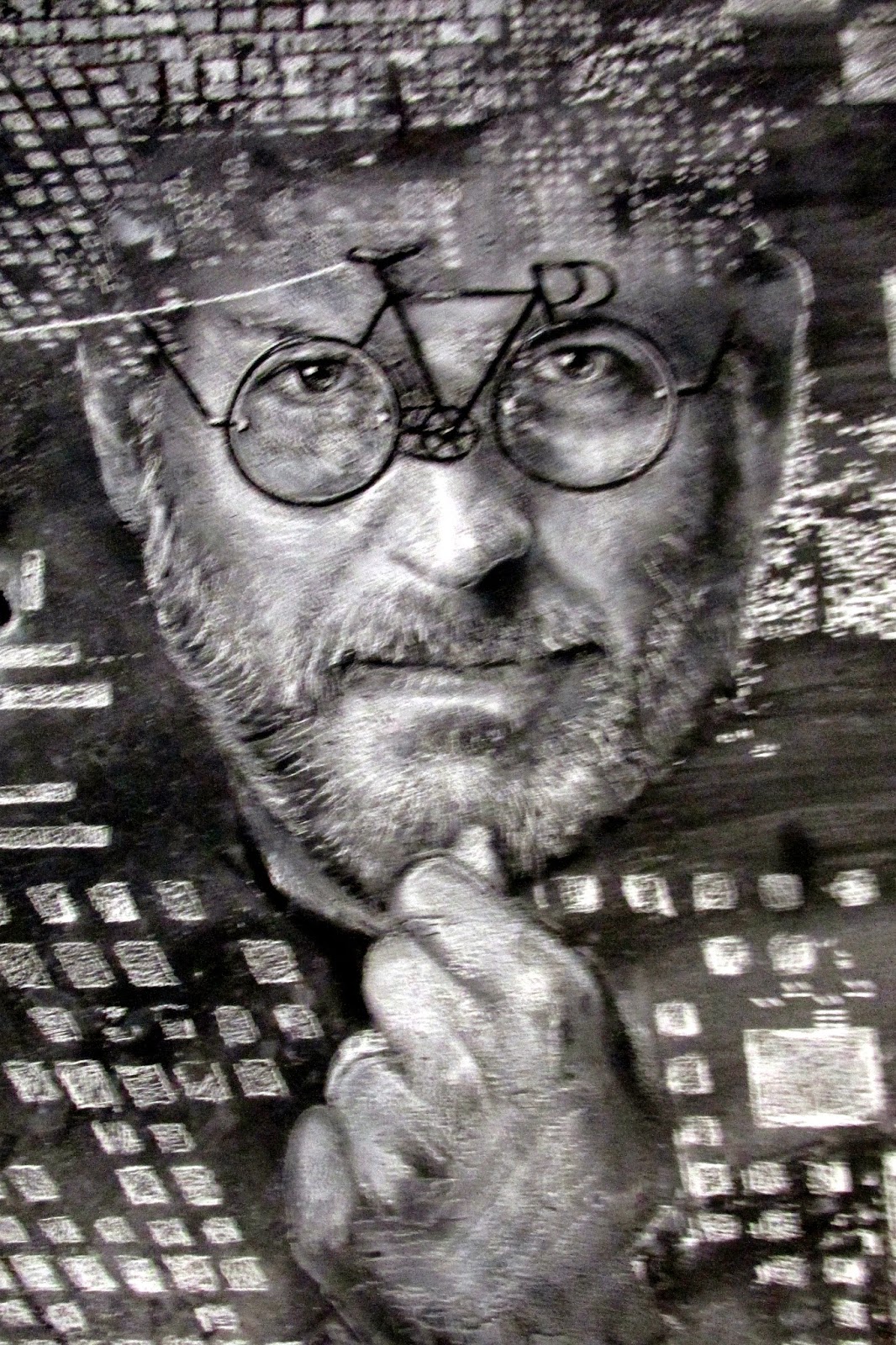 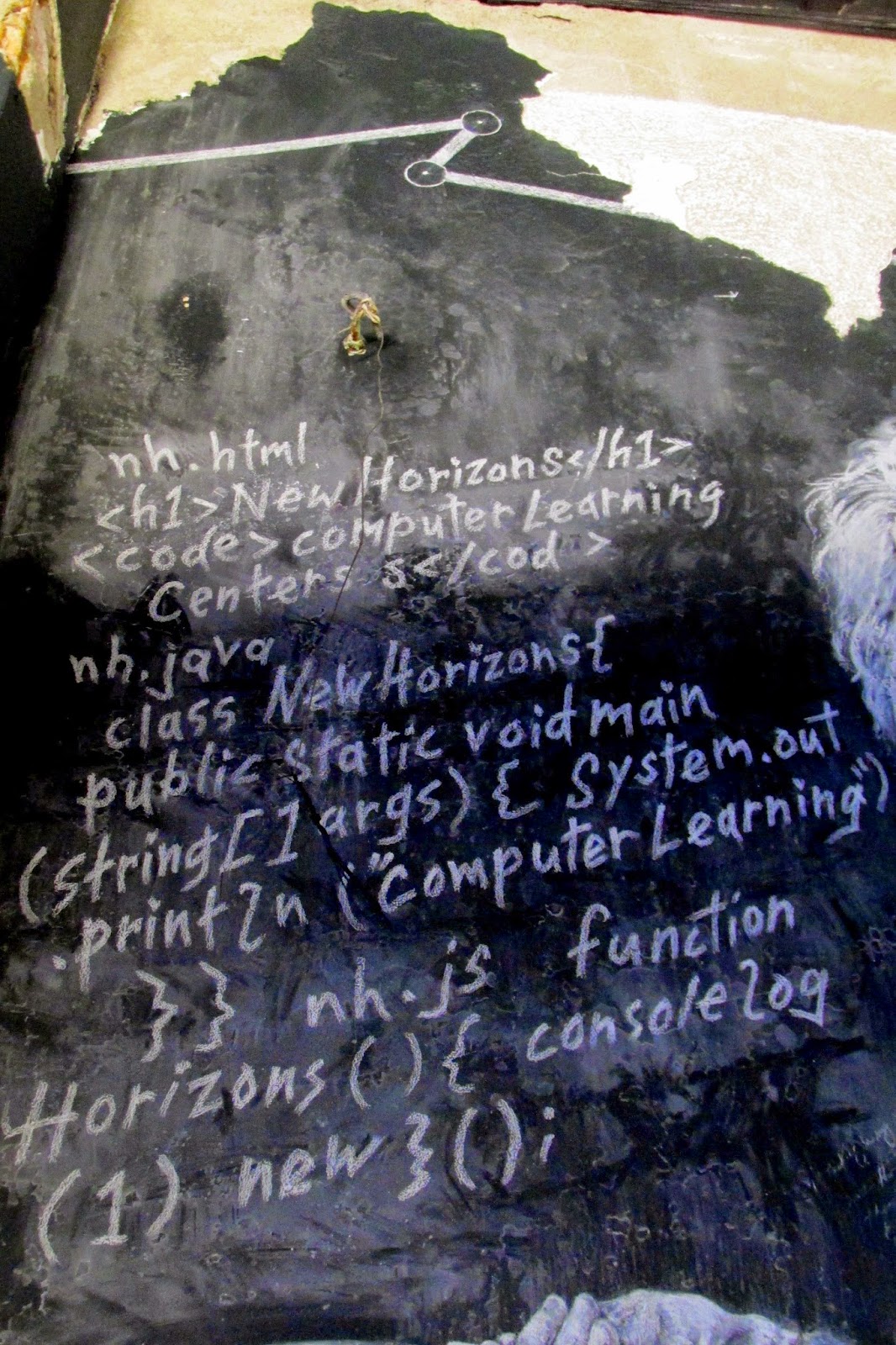 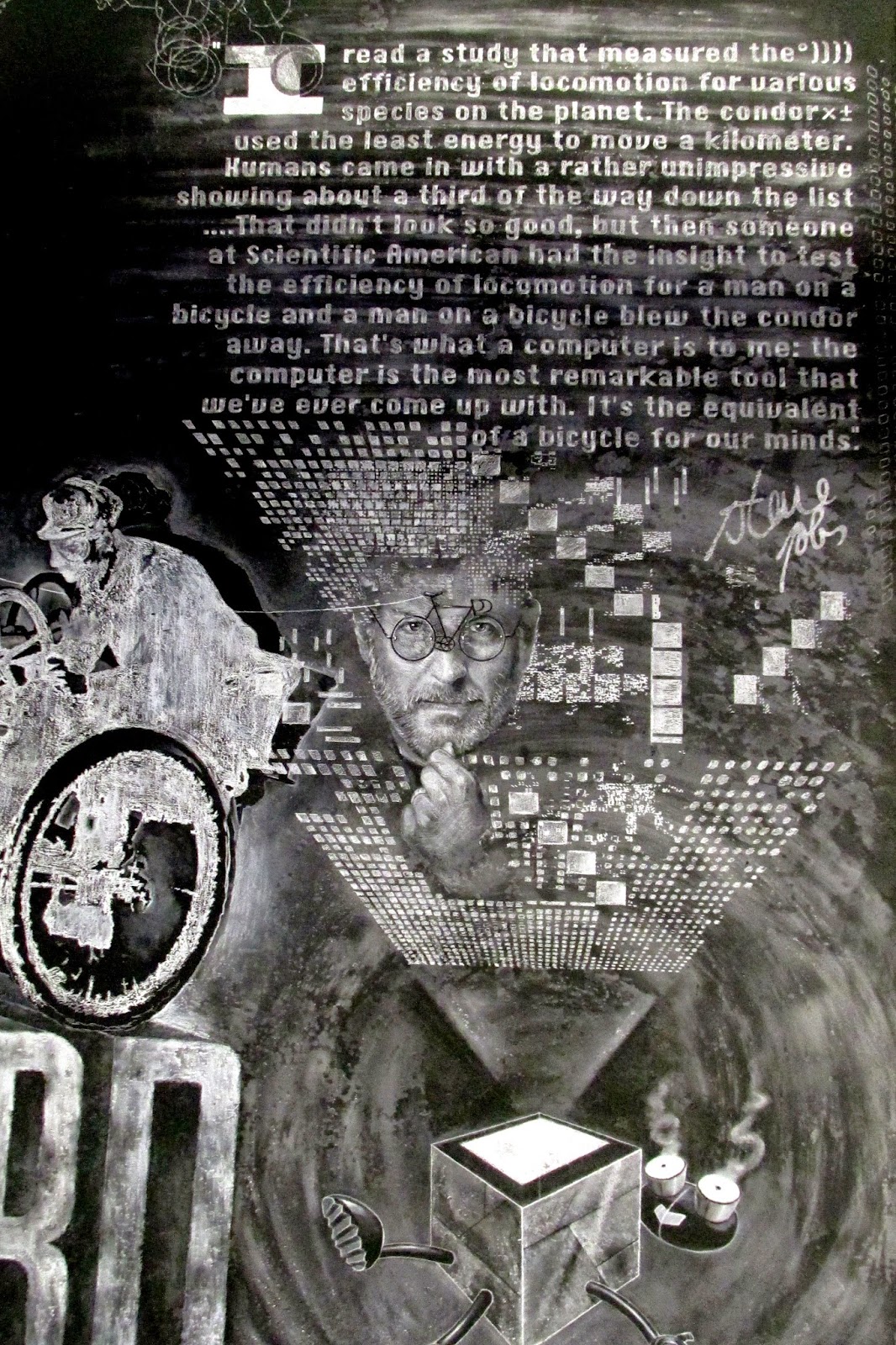 He sent Ina's recipe and it really is delicious. I'm sort of a stickler for mise en place -- chopping/dicing all your veggies and measuring out your ingredients before you start. And really, that made the whole thing a snap! Very tasty and not hard at all. I recommend it! And his baguettes were terrific! 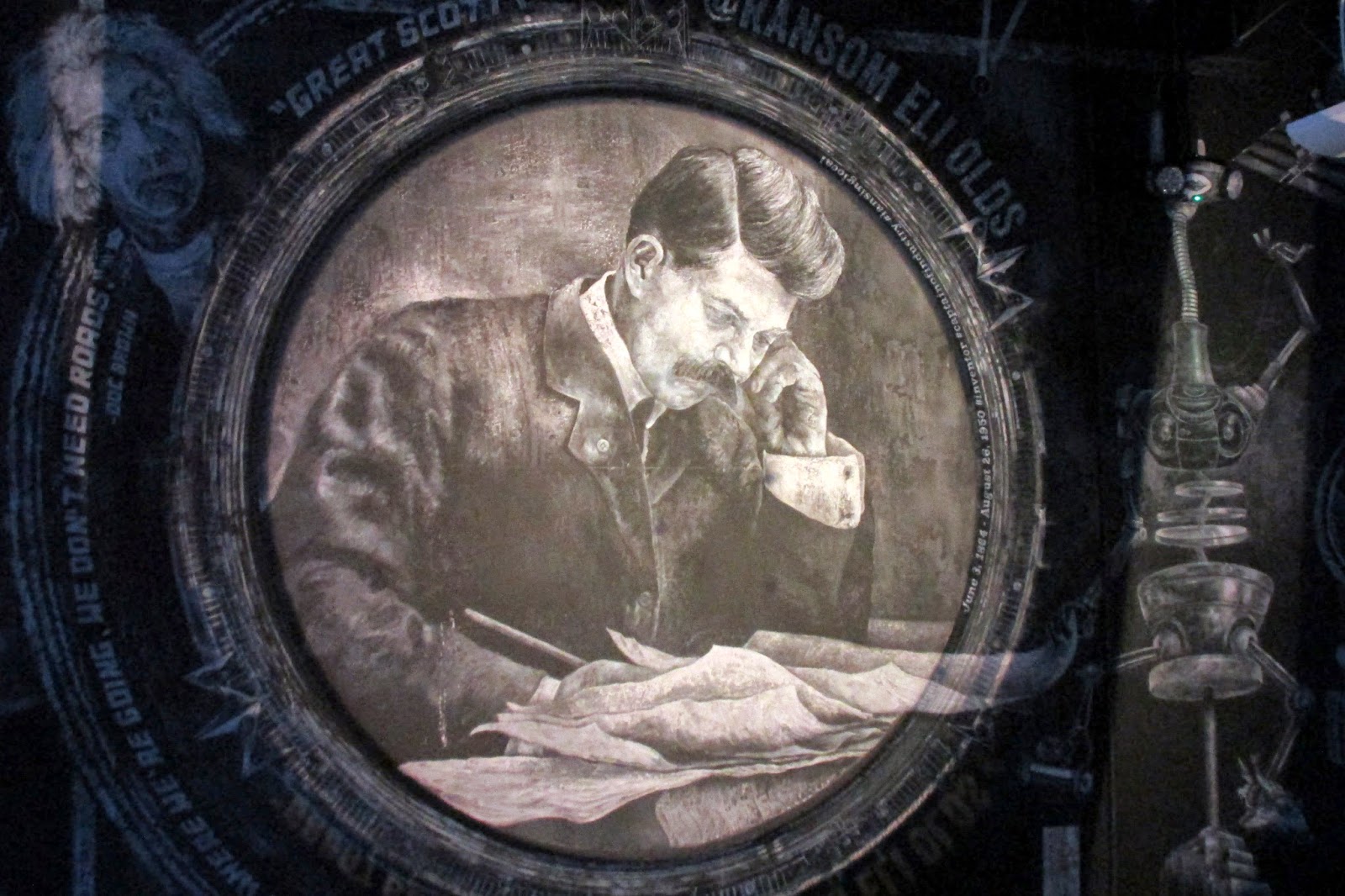 Most of the photos in this post make no sense with the words but they are photos I was thrilled to take. Rick's oldest, Greg Oberle (my loaner kid!) finally finished his chalk mural in an office building in Lansing. 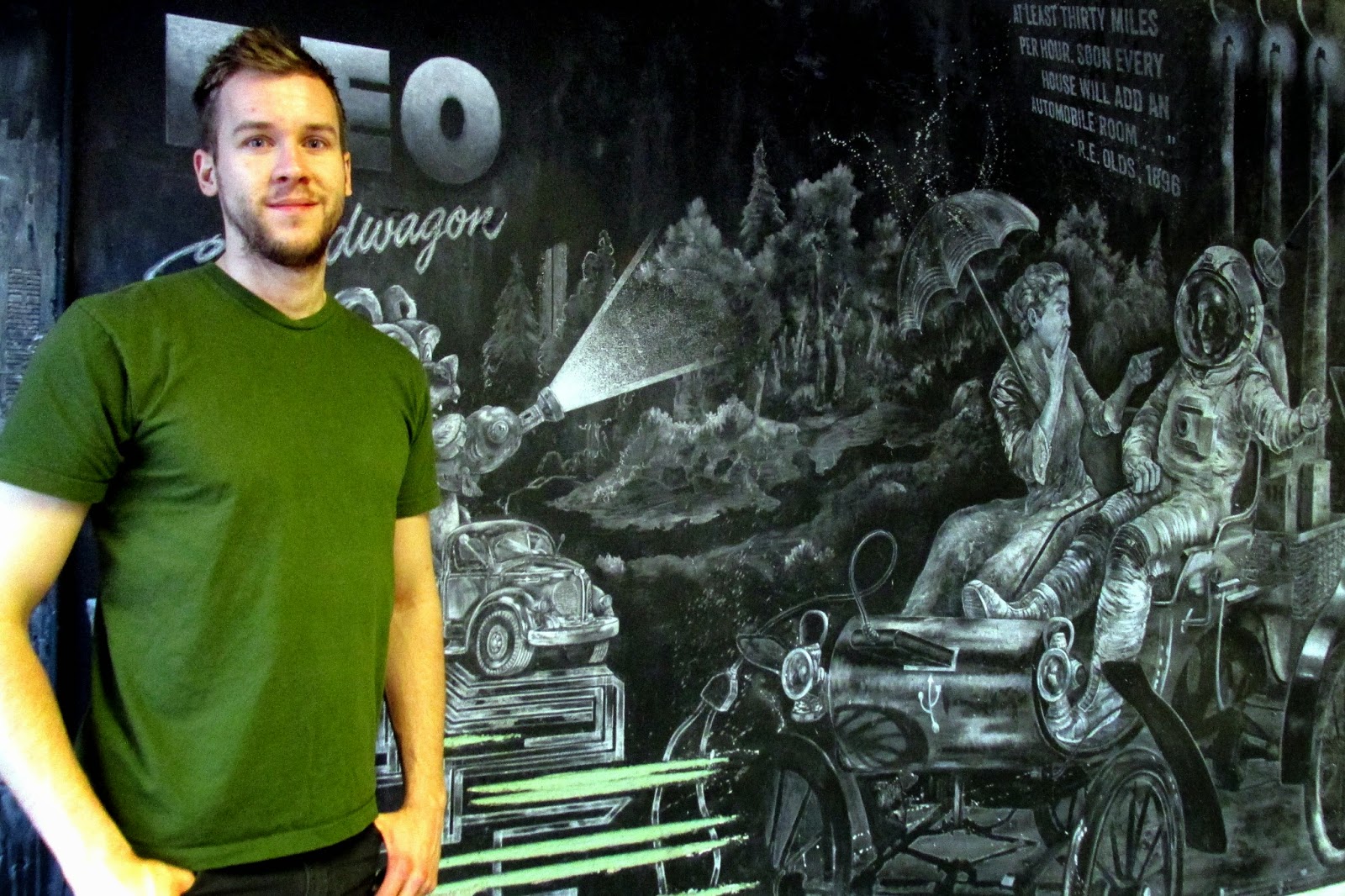 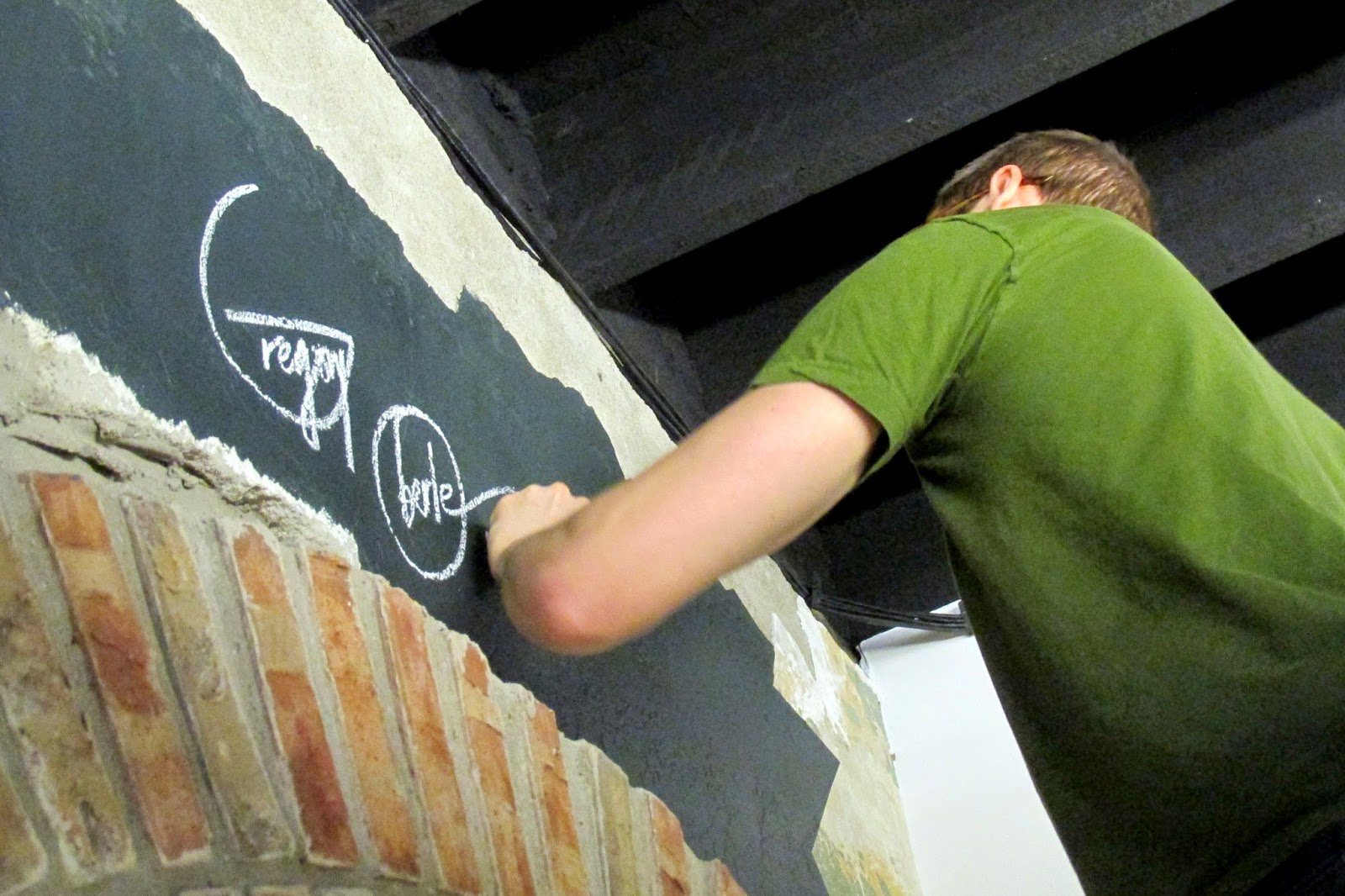 Look closely (it goes the entire width of the building) and you'll see Bill Gates, R.E. Olds, Steve Jobs, local landmarks and lots of Olds-related images mixed in with plenty of sci-fi stuff. I'll never understand what's in his head but I love how it comes out of his fingers! 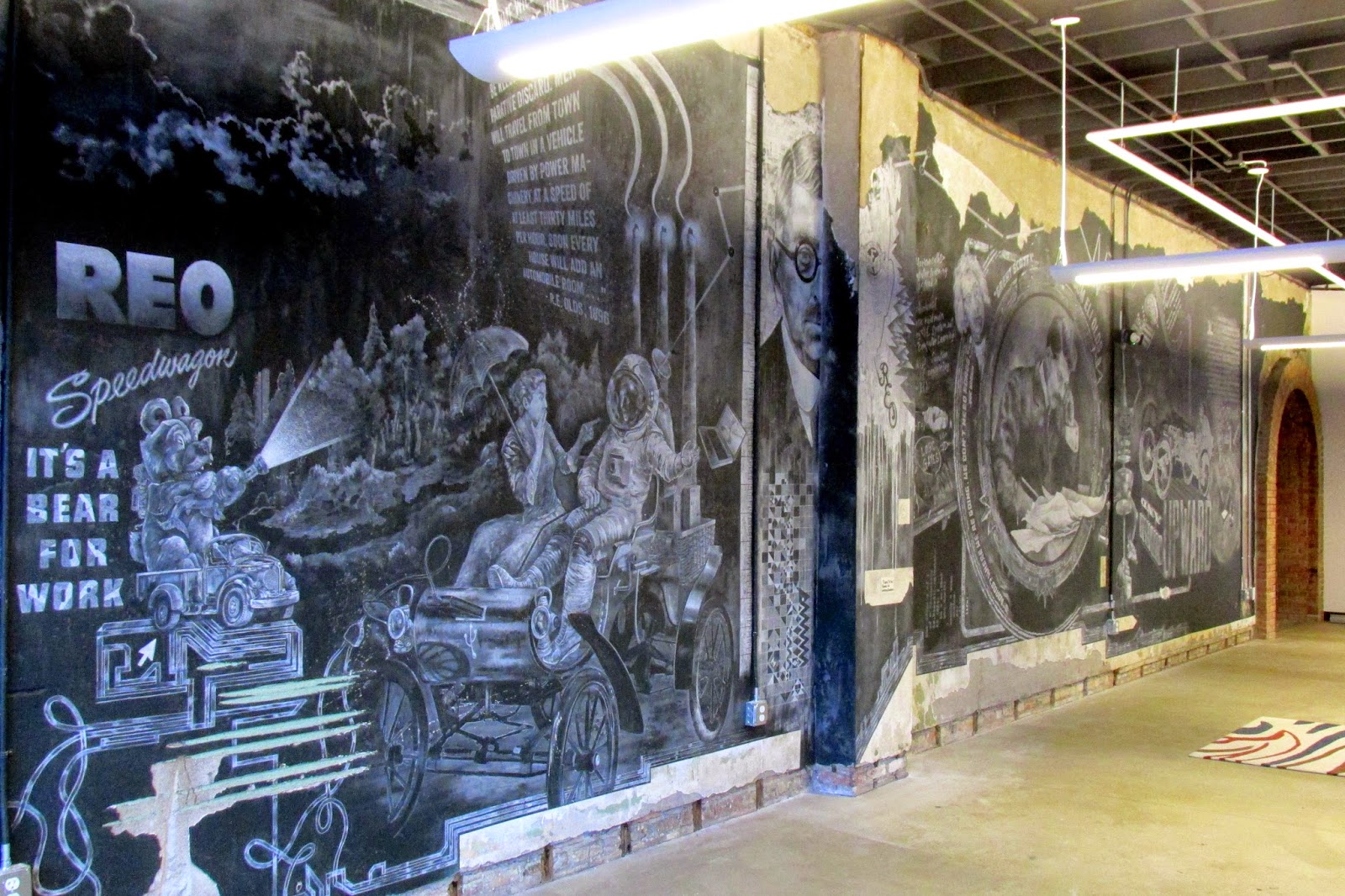 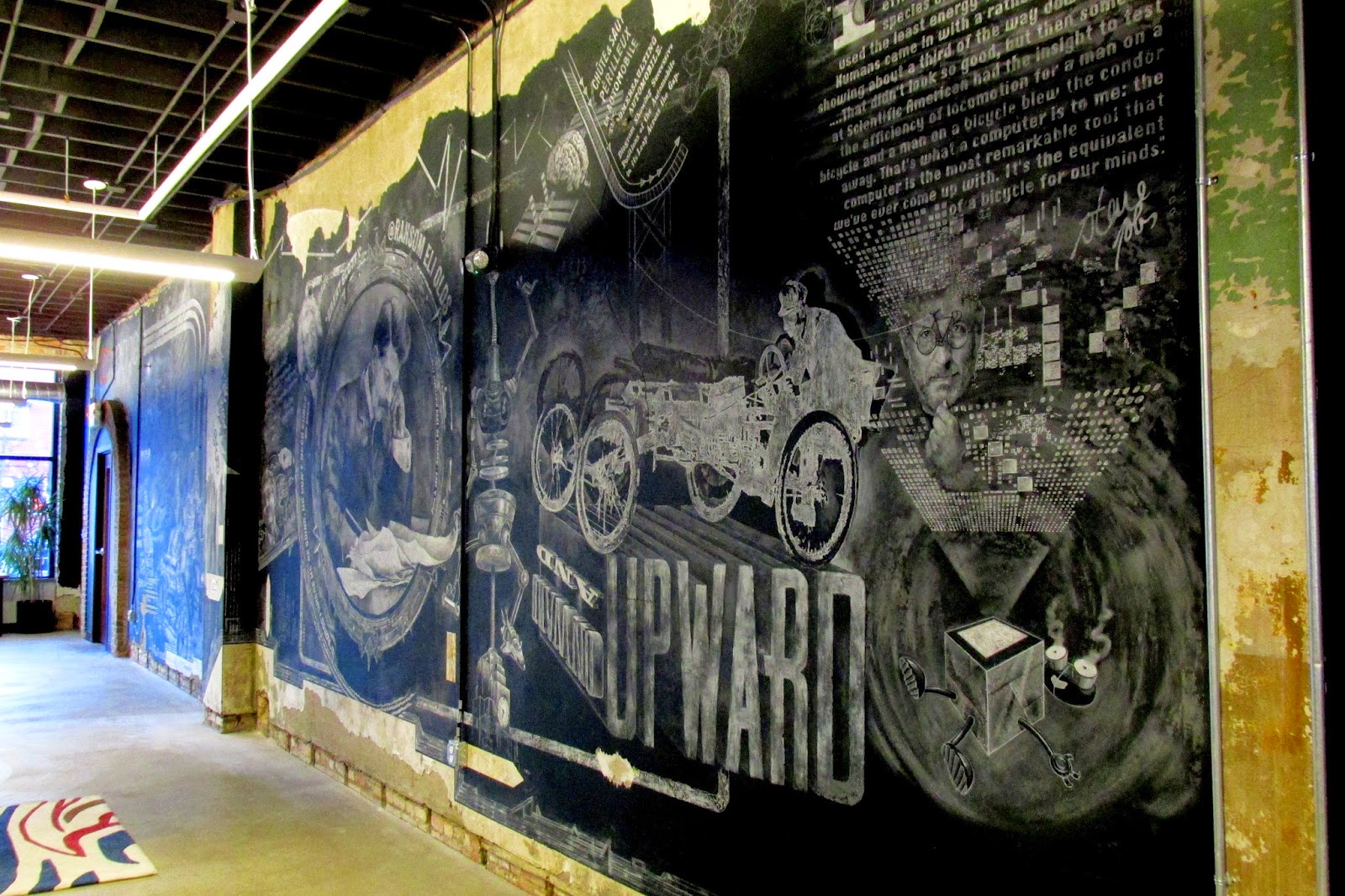 Needless to say, I'm pretty impressed! You may have seen some version of these pix before the mural was completed. Now it is done! Three cheers! 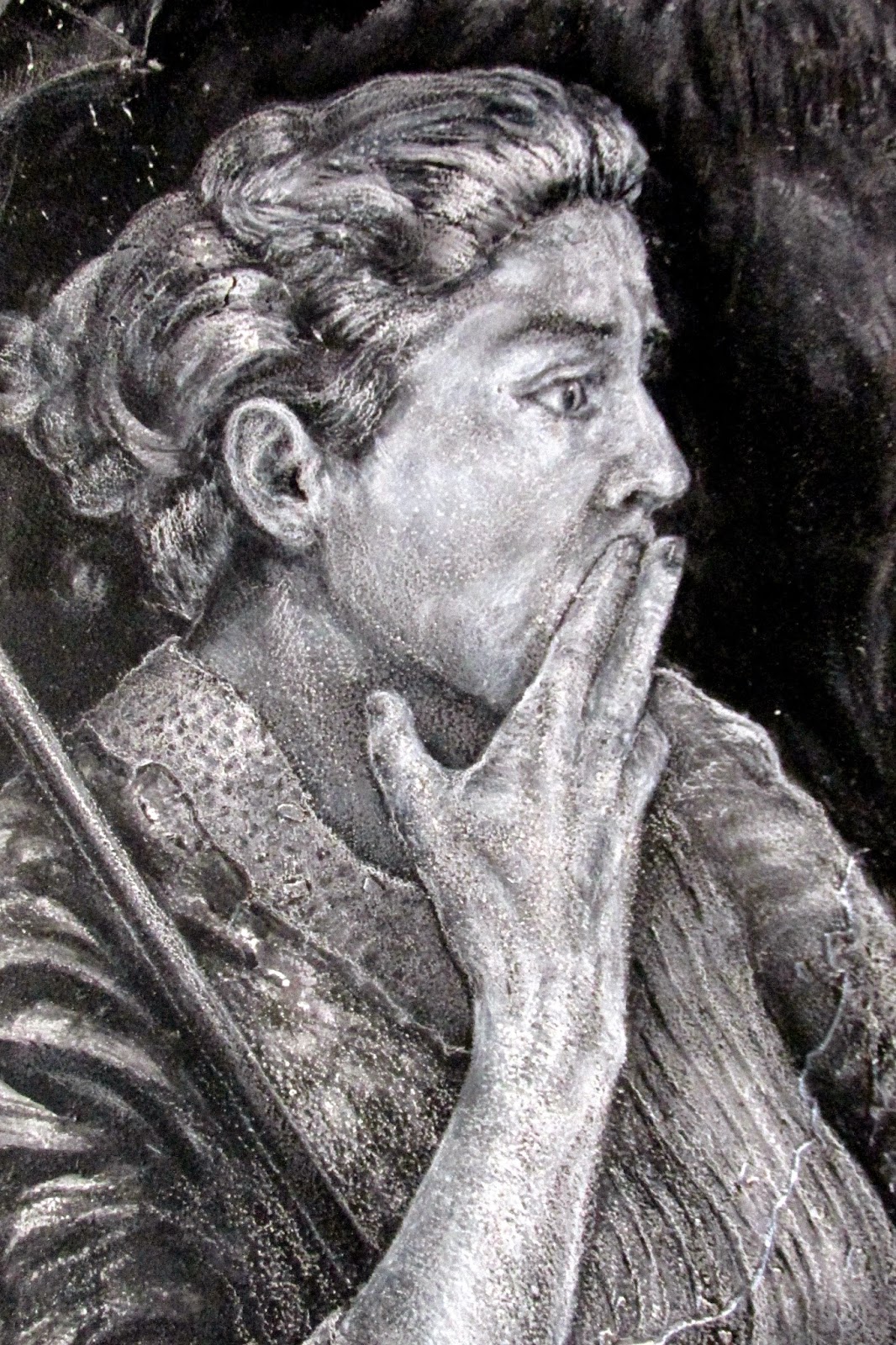 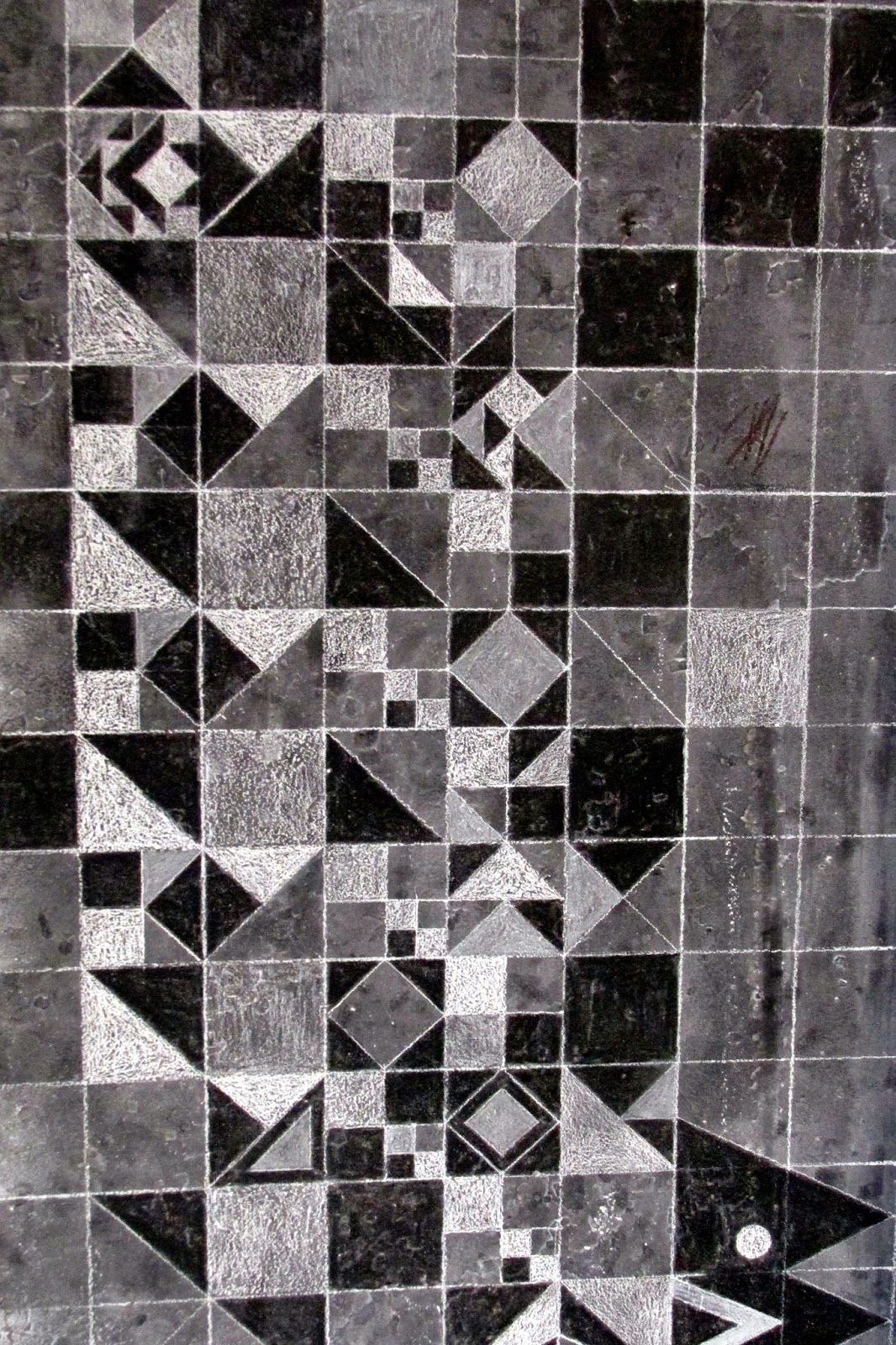 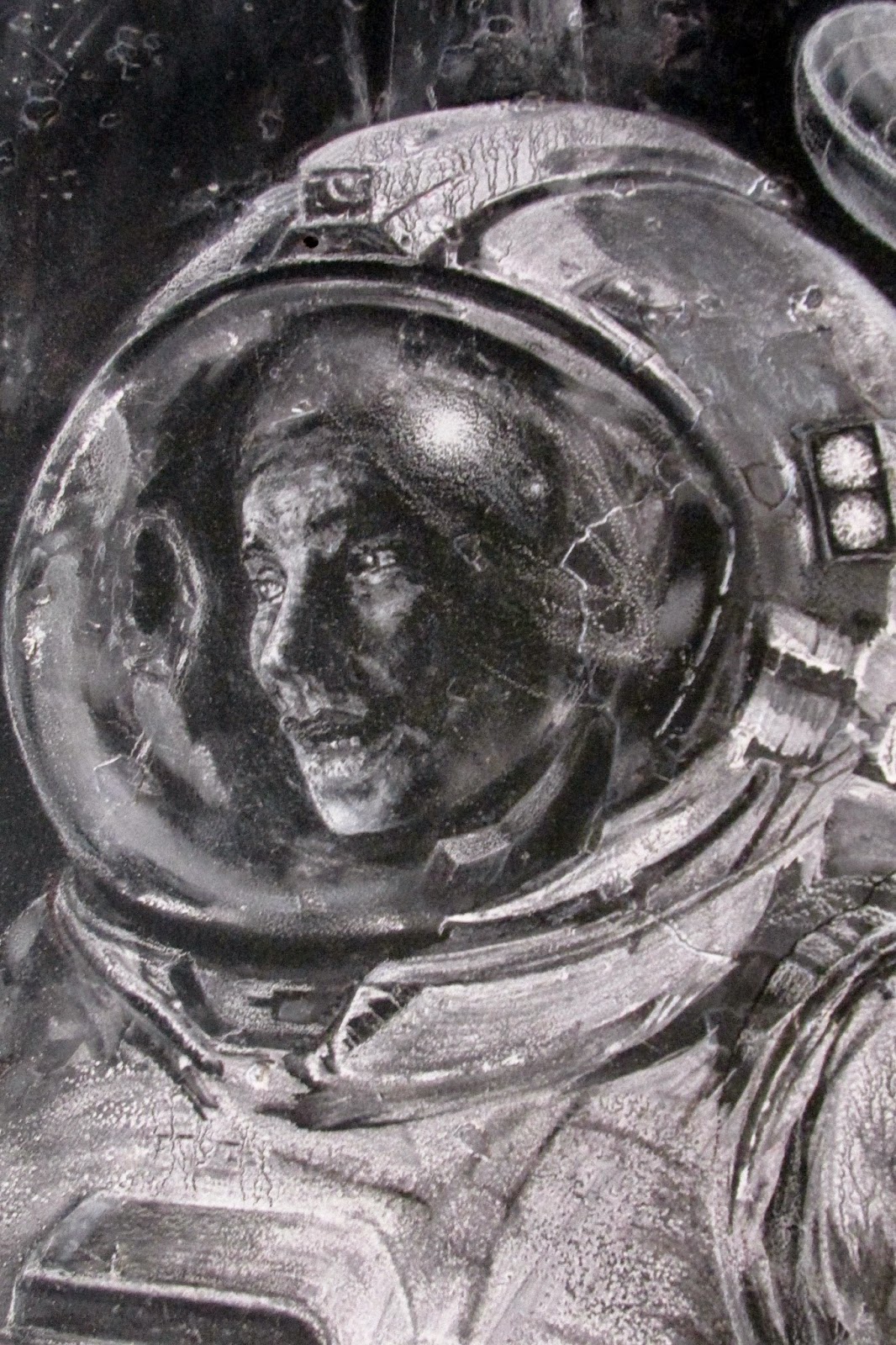 Speaking of Bill Gates reminds me of computers and I am getting a new one. A good friend (very good friend!) has repurposed one for me. So hopefully I will be able to see videos without them stopping and starting and be able to load tons of photos without deleting (or moving) old ones! 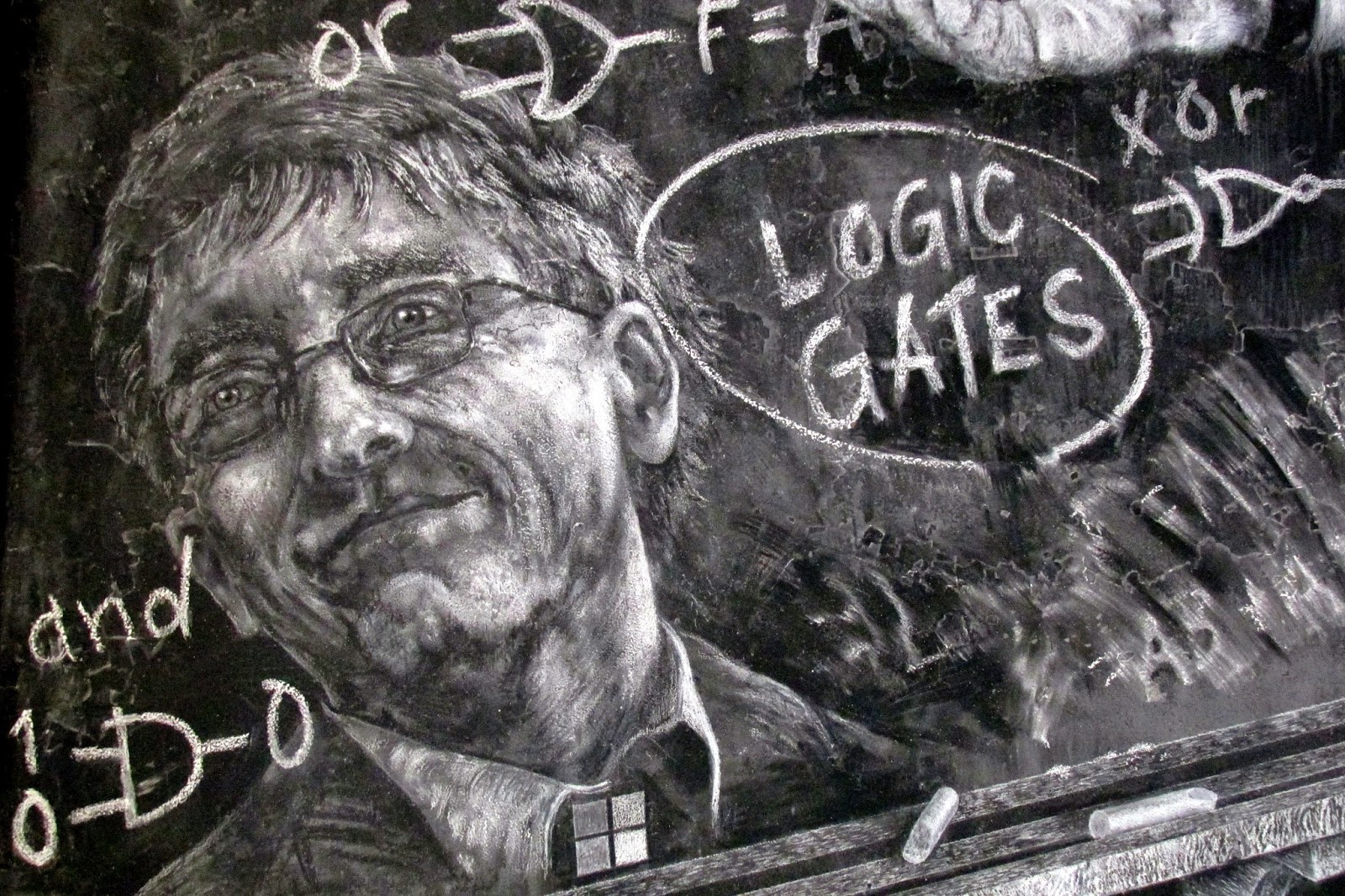 I send good wishes to East Coast Gypsy readers who are digging out from the snow! As you can see, we don't have much. But I'll knock on wood as I say that! 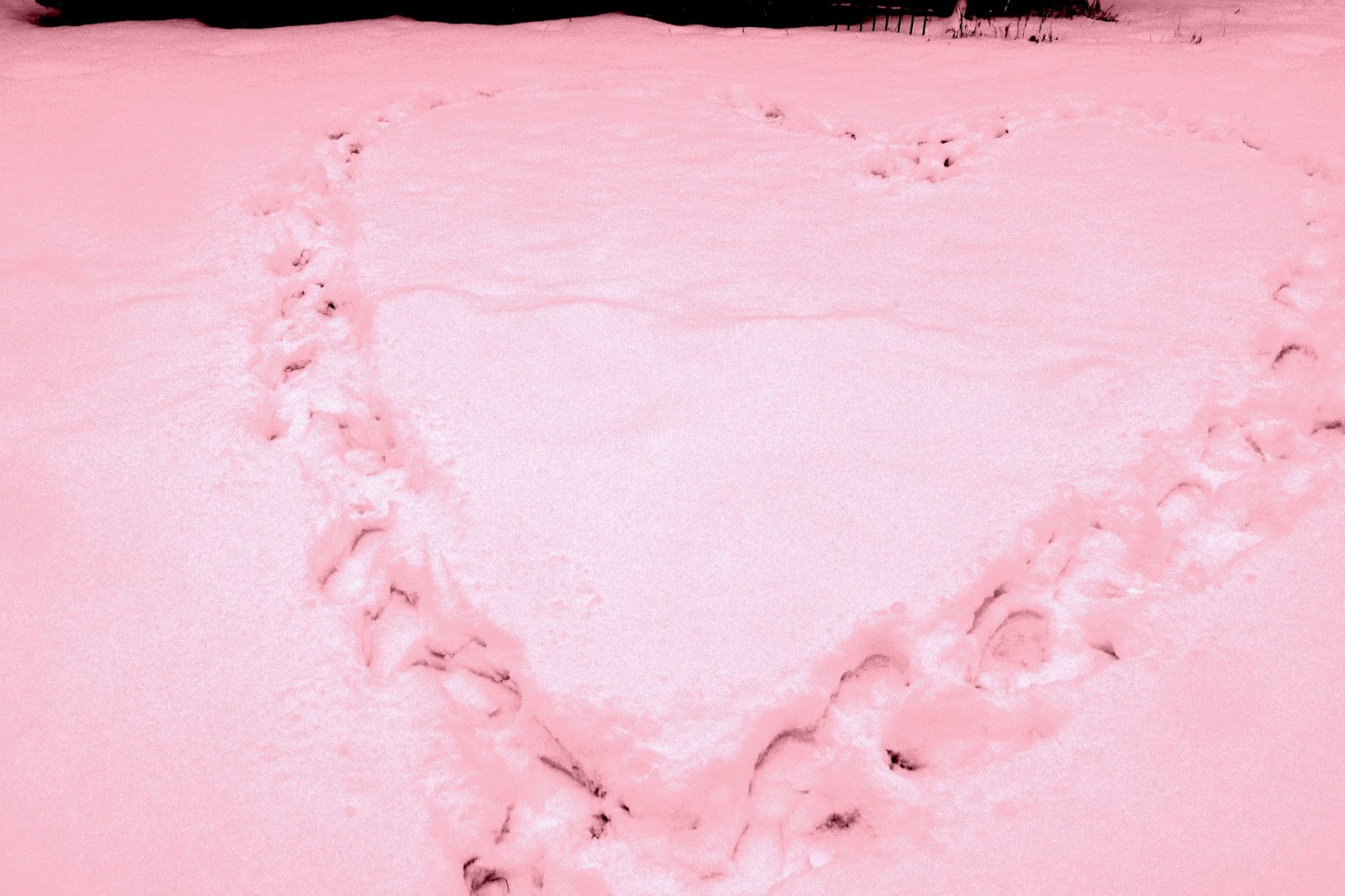 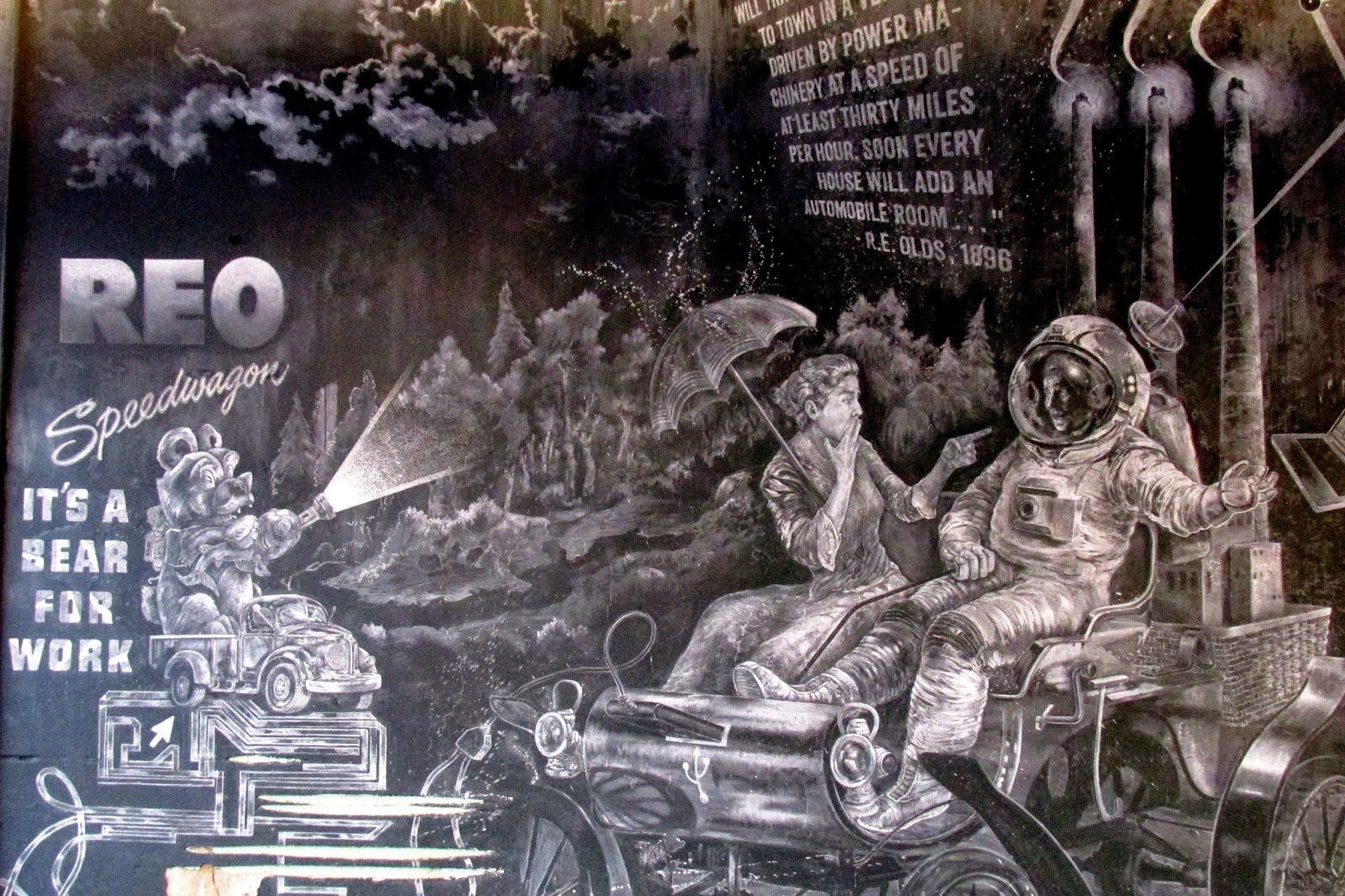 As they say, Onward and Upward! 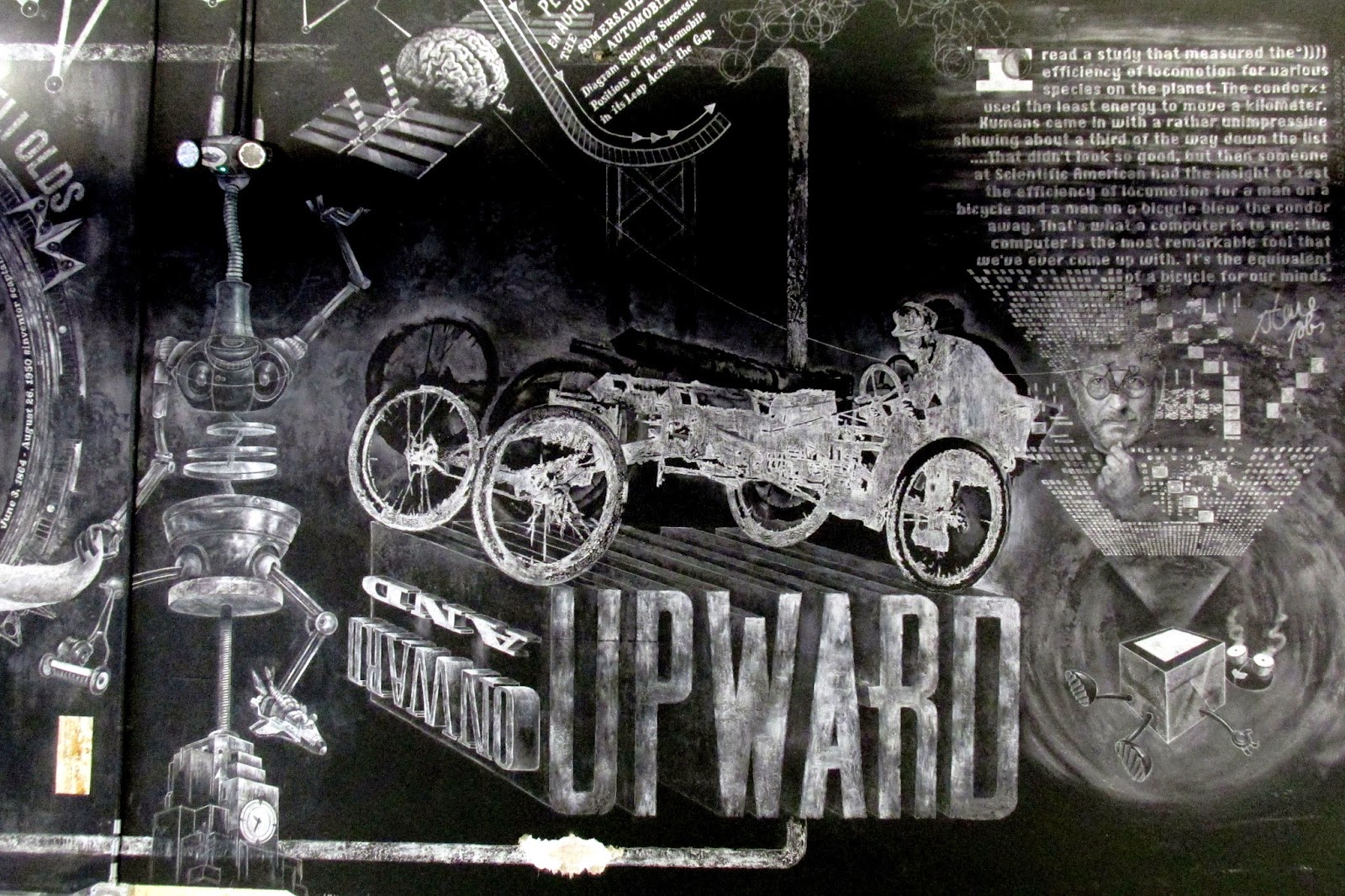 (Well, we have to go somewhere from here!) 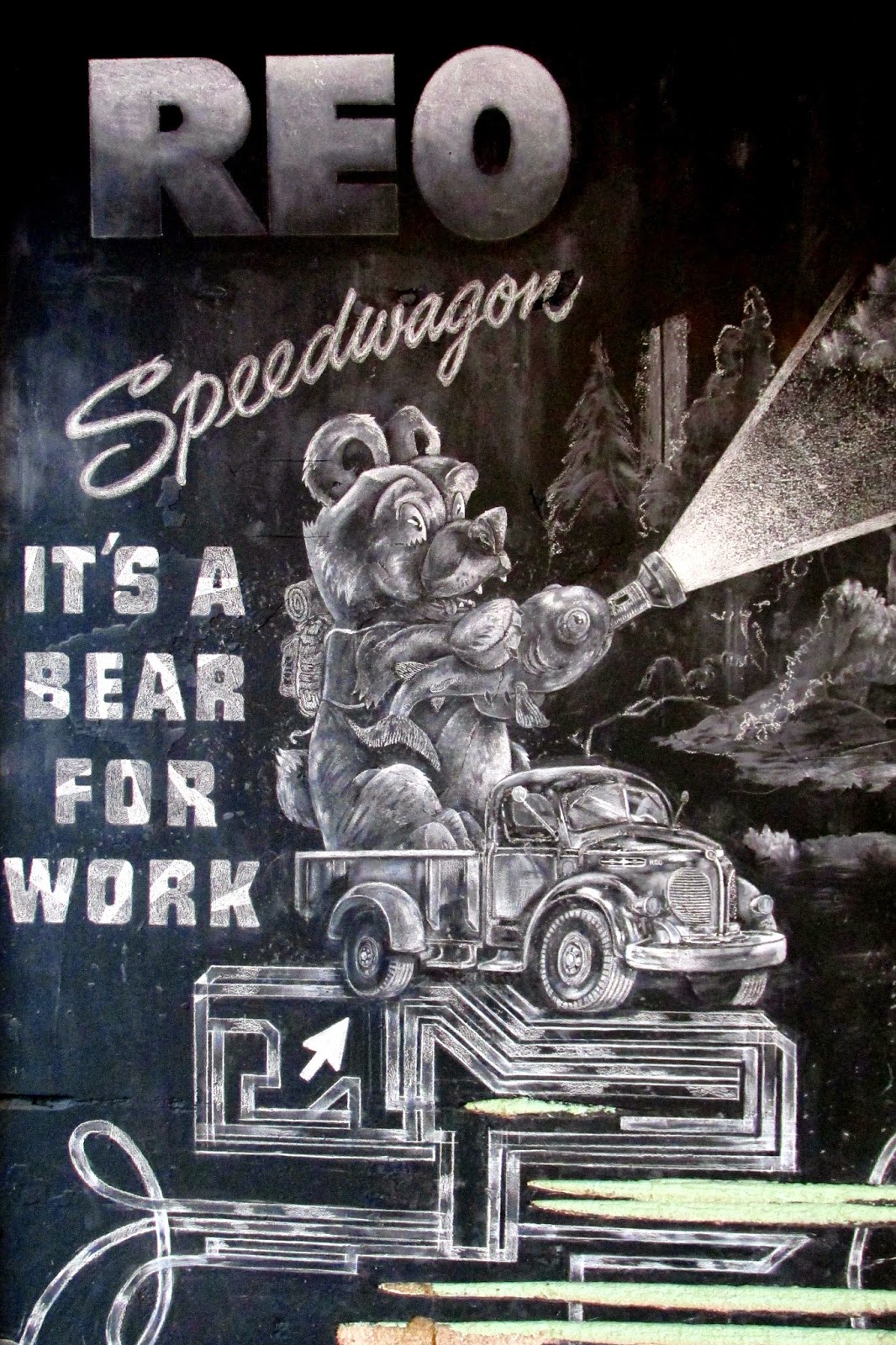 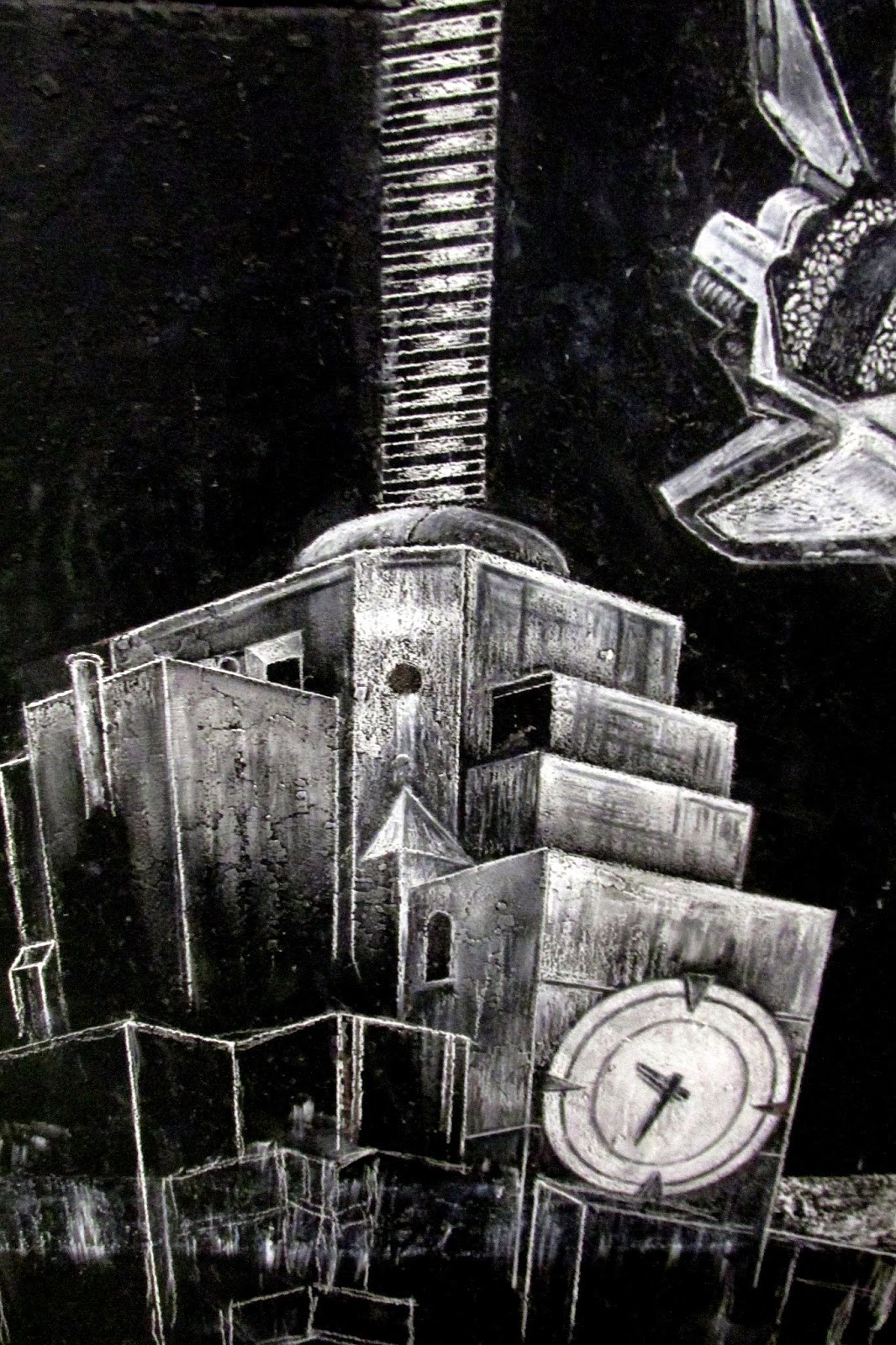 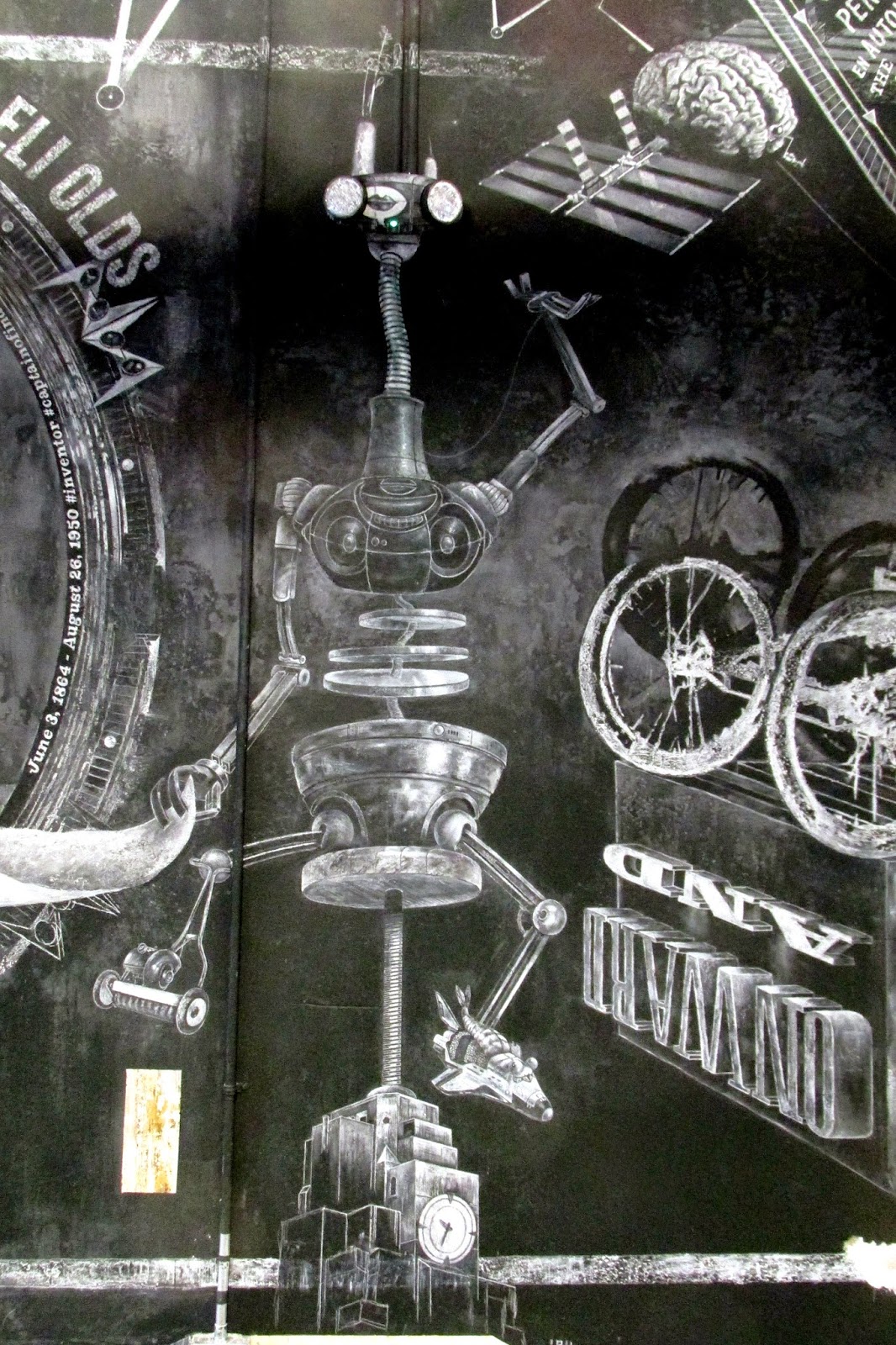 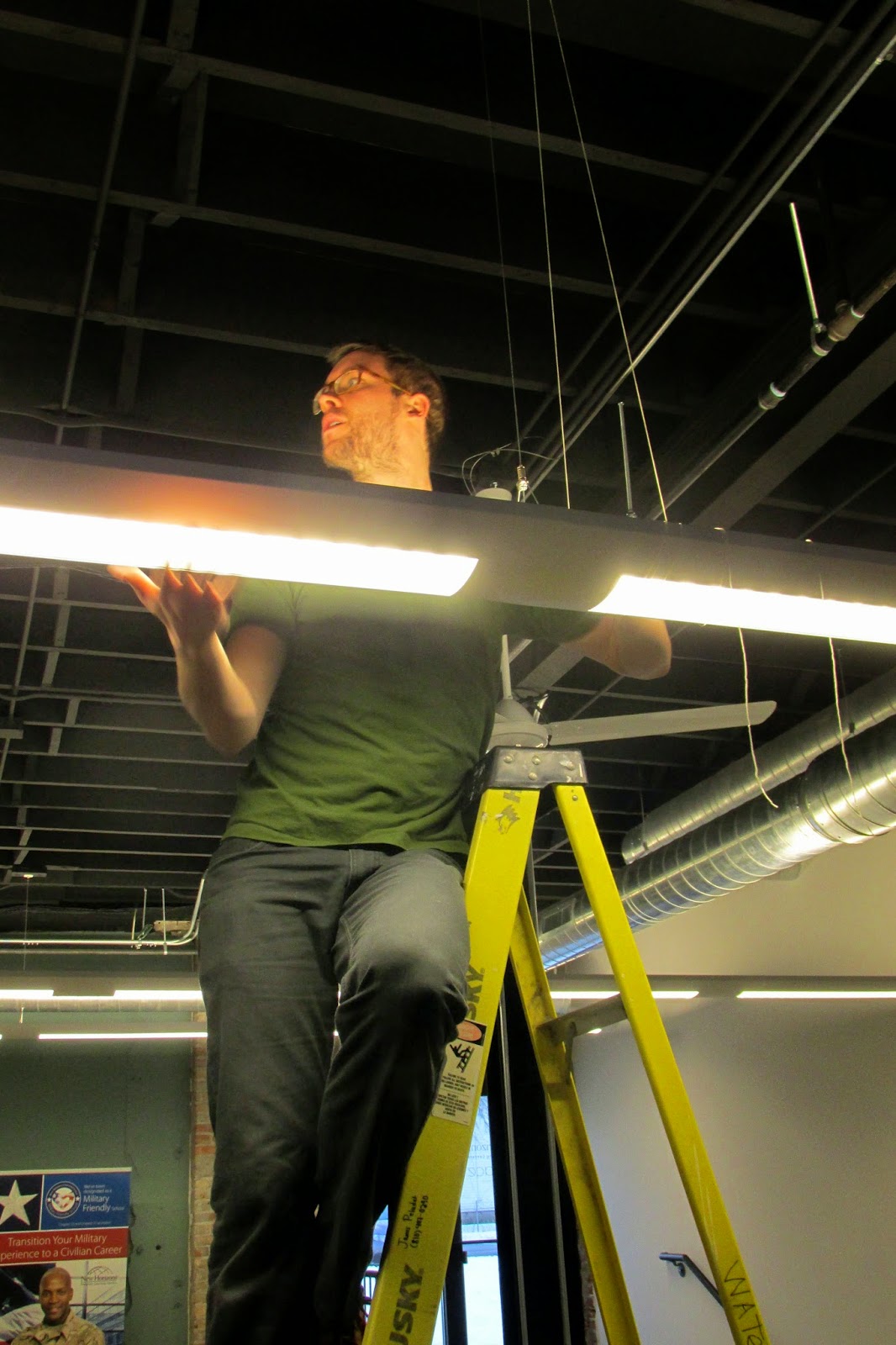 All I can say is Greg has major talent! I can't even fathom such a detailed mural with such enormous scope! looks like you could stand and look forever and still not see all its nuances. Glad you aren't snowed-in. It's actually been warm here - we went to Denver today - it was in the 70's! Is this the end of January?

My goodness...what one artist can accomplish. Oh Jeanie, what would we do without ART in our lives!!!!! Much love to you, Anita

Greg's art is incredible and beautiful to behold; thanks for posting it (as I don't see any trips to Lansing coming up to view it). I look forward to your post about the workshop; it was such a great art time, made all the better for keeping company with you both days and Kate on Sunday.

Wow!! I am blown away by Greg's art work! That is one talented kid! (well, I guess he is not a kid anymore!). How impressive. You and Rick must be so very proud.

Sounds like you are having a great month! How fun to have a visitor! January has felt like it has sort of dragged by for me so I am reading to turn the calendar to a new month on Sunday.

Oh and thank you so much for the birthday card - that brightened my day and you were the first one to send me one! :) So way to be on top of things!!!

I don't remember seeing any photos of the mural before. Perhaps I didn't understand they were part of a larger project. I'm so confused -- I thought the whole point of chalk is that it's not permanent. Is this a permanent installation? If so, how is it kept from the elements, grubby little hands, etc., from damaging it?

I'm from the generation that learned to use limestone gravel rather than chalk to make our hopscotch blocks, since the chalk never lasted!

That mural is awesome! I am so glad you are involved with art, which is so important for one's sense of well being.

What an amazing mural! Wow! So huge, and so much going on! It takes a ton of talent, as well as a ton of artistic sensibility to take so many fascinating subjects, portray them excellently, and weave them together.... It would surely take many (many) visits to see and appreciate all of it!

Thank you for sharing it with us!

OMGoodness, Greg is one talented man!
I'm curious why in chalk, I find it unsettling to think this piece is not permanent after untold hours of drawings!
His work really is amazing, thank you for sharing!

Greg is very talented. I can't imagine the time and work that went into that.

Thank you for leaving the Coq au Vin on my blog. I looked it up immediately and we will make it soon.

That is one amazing mural. He definitely has talent. I am hoping that you do not get any snow. Where in Canada is your friend from?

Oh my goodness, Greg is crazy talented! He has spectacular vision!

I wanted to ask the same thing as Linda. How will he preserve it? Or is it meant to be slowly rubbed away by touching?

The mural is spectacular!
Enjoy a special visit with a special friend. Have fun at the movies!

I love the depictions of all the different highly accomplished people. Chalk is a fascinating medium -- will the mural somehow be preserved?

Oh my goodness! Greg is incredibly talented. I had no idea. This is done in chalk? I hope it can't be erased. If love the effects that the chalk gives. You all must be so proud. I'd love to see this in person. Please tell him how very impressive his work is. Does he do this for a living?

Wonderful pics, Jeanie!! Wow... wow... wow... Greg's art (CHALK!!) Is beautiful!! He's very good are figurative drawing and capturing people. Such fun when you share his art here. And VERY fun with your friend visiting! And I'm sure Miss Lizzie is happy for the extra attention. ;o) A long time since I've made coq au vin... I can taste it now! mmm... Happy Days ((HUGS))

Hi. Not sure if you'll remember me... I used to blog as "Tori_Z" a while back. I haven't been around in ages; but I won't bore you with details as to why. Anyway, just thought I'd take the time to say "hi" again at last.

Hi Jeanie! Oh, the artwork is something! Have a great time with your friend and thank you for popping in to see me.
Be a sweetie,
Shelia ;)

Lovely photo of Lizzie looking very thoughtful.
And the mural work is wonderful. Gary's very first job after leaving college was mural work, he remembers hanging off scaffolding towers with a paint brush between his teeth!
Heather :)

More WOW WOW WOW on Greg's work!!!
Hope you and your new computer get along famously dear Jeanie.
Meow and abientot!
oxo

Onward and Upward is my favorite - I think. WOW!

I'm sure his incredible talent will get noticed, with these amazing murals!