Saturday was Mighty Uke day in Lansing's Old Town and I never knew ukuleles could be so much fun! All this plus Happy Hour! The place was so packed that the restaurant hosting the open mic had to have had one of their best days ever! (And if Elderly Instruments didn't sell a ton of ukes, I wouldn't doubt that they will!) 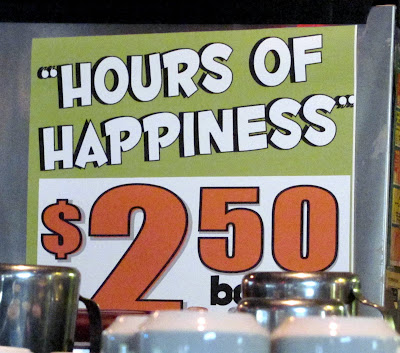 My experience with ukuleles was seeing them in movies -- generally with bear skin coats, doing the Charleston and singing "Varsity Rag." Then, of course, there is the Hawaiian sound, ukes on the beach, swaying hula skirts, setting sun, leis. But it is so much more! 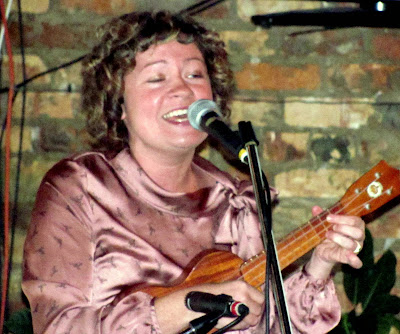 The event included open mic periods (that had been scheduled -- more on that later!) and a screening of the movie "Mighty Uke." (You can also hear a Susan Stamberg take on this and some great music from the film at NPR.)

You may or may not be a ukulele fan -- you might be one and not even know you are! But if you watch this terrific film, you may well discover a new passion! You will also discover Jake Shimabukuro (below, courtesy Tiny Goat Films., Ltd./NPR), one of the astounding musicians featured that gives new depth and dimension to the simple ukelele. 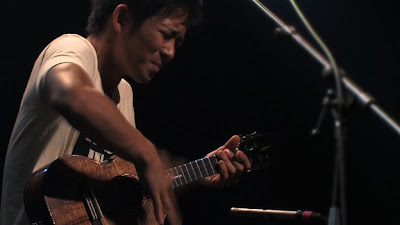 You will also "meet" numerous uke players from around the world, including an amazing class of high school students from near Vancouver, Canada, where every child learns the ukulele as part of school. The things these kids do simply defies belief.

Filmmaker Tony Coleman introduced the film and did a Q&A after. 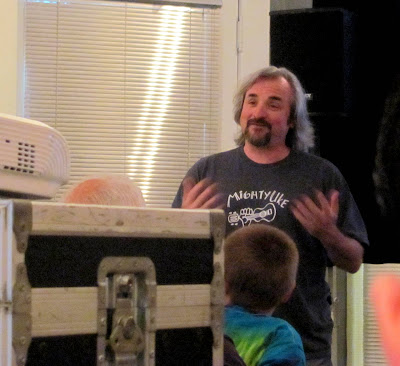 He and Margaret Meagher, his co-producer on the film, then staffed the t-shirt/DVD table. Rick bought a DVD -- on the back Leonard Maltin says everyone should also watch every single on of the 10 shorts after the movie -- they are wee movies in themselves and simply wonderful. 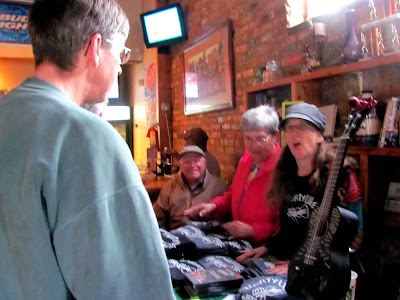 The movie introduced us to a number of uke players and one I was familiar with, Kimo Hussey, who played the Great Lakes Folk Festival last year. I had a chance to spend some time speaking with him and he was such a geuninely nice guy. I was glad he was featured. 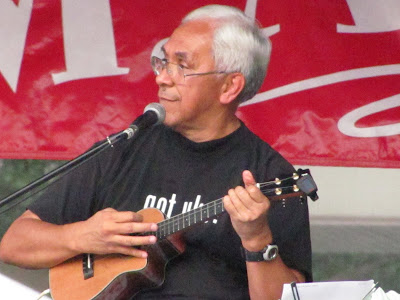 Then came the local performances -- in the two-hour mic segment we saw (there was an earlier one) about eight area/regional groups performed. They were all fun and there was a lot of singing along. This one is the MMUGS (Mid-Michgian Ukelele Group Strum). 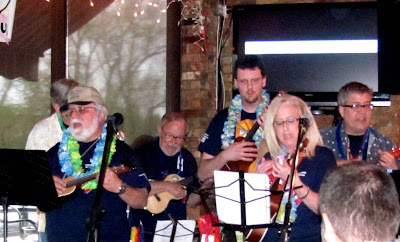 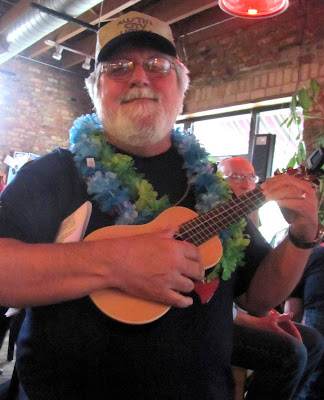 Rachael Davis is pretty much of a local star in our region of the folk world. (You can see her performance on WKAR's BackStage Pass here -- or perhaps in your community, on your PBS station!) 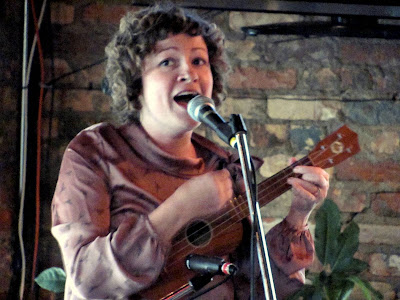 This isn't the best photo -- but it really captures her joy at playing this wee little instrument! 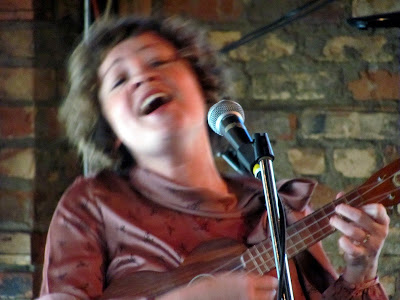 Perhaps the biggest surprise of the day was Magdalen Fossum. I think she's 10 and had just recently played at the Ark in Ann Arbor, introduced below by organizer Ben Hassenger. 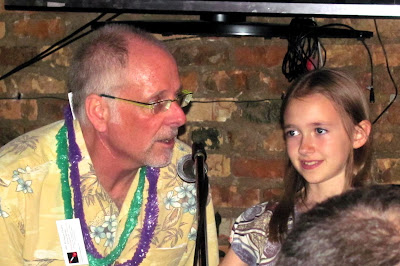 As Mike said, "I wouldn't have wanted to follow her!" 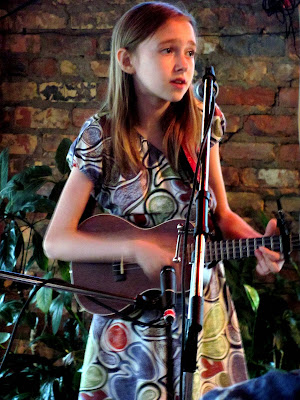 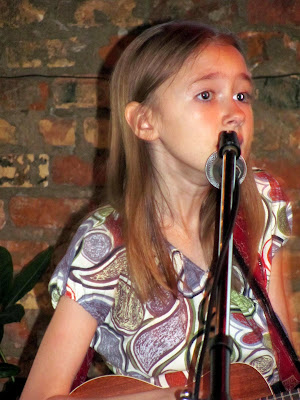 Another favorite was The Fabulous Heftones with Brian Hefferan and Lynn Hershberger. Lynn is also a terrific knitter, pattern designer and yarn-dyer making some of the loveliest wool ever! 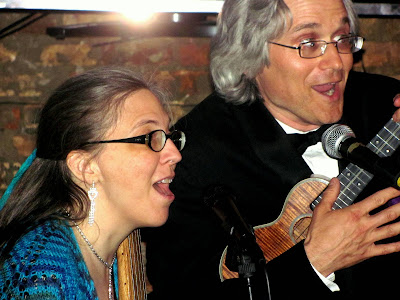 They played old-time, 1920a-style uke -- fast, furious, fun! Dressed to the nines and playing everything from songs like "Shine on Harvest Moon" to ragtime, they were a wonderful way to end the day. 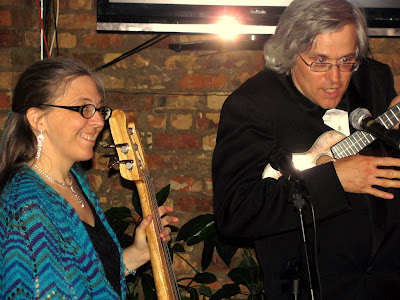 So, was it uke overkill? No way! The thing I learned in the film about the instrument (and also watching the acts) is that almost anyone can play it. Sure, like every instrument, there are degrees of difficulty and if you are fortunate enough to see the Mighty Uke film, you'll see exactly what I mean. (Imagine the fastest classical piece you know on a uke.) 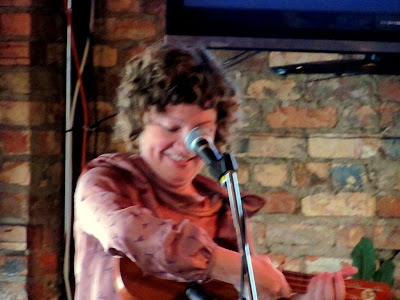 It's the people's instrument. You can play it alone, you can play it with friends. You can teach a four-year-old, you can be like one fellow in the movie still playing -- 101. You can play as easy or difficult music as you choose to practice. You can accompany yourself singing. Add a kazoo or slap the wood of the uke, and you're a band! 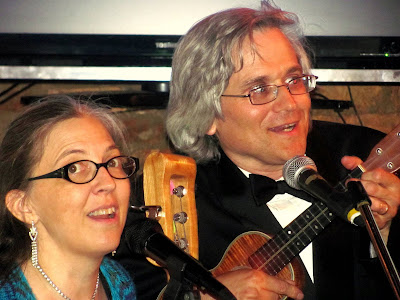 And perhaps best of all, it makes people smile.
Posted by Jeanie at 1:00 AM

WOW... so much fun! My husband plays the ukulele. He plays a lot of stringed instruments actually, very good on guitar. He plays the uke for fun. It is a happy little instrument. Fun post, Jeanie! :o) ((HUGS))

Oh what fun! I think the folks that play the ukulele are always the most down to earth people. I love their sense of fun and creativity.

My son and his wife gave their boys ukuleles for Christmas this year. My memory of the time together from this Christmas will always include the fun time of the kids learning to play the new instrument.

This looks like so much fun. I never know what you're going to do next, but I know it will be fun!

I've never been fond of the plunk-plunk-plunk of the uke, but then I don't think I've heard someone play one for - decades! I am prejudiced! I'll have to give it another listen.

There is an elderly couple in town with a mail-order uke business. They sell on ebay, I think - both resale and ones that he makes.They're at the post office every day, mailing them out. A postal clerk told me their bill for postage a couple of years ago was about $15,000!

My hubby actually
took uke lessons
as a teeny boy....
but I don't think
he remembers much,
now! What a fun night.
Uke music just puts
you in the mood for
a good time : )
xx Suzanne

What a fun time!

Marvellous post and photos! Love to be there and hear them sing and play. Never thought that humble little instrument can elicit so much fun and enjoyment! The look on people's faces speak loudly despite our not hearing them.

I just love to see people enjoying music on an instrument that doesn't get much attention most of the time :) And isn't it even better when you see a young person taking it up and carrying on the tradition!

So glad you shared this...way cool!

A friend of mine turned me onto hawaiian ukelele music (Israel Kamakawiwo'ole & The M?kaha Sons of Ni'ihau) and I've been a fan ever since. This looks like a wonderful event, and a great evening, too!

What fun! I wouldn't buy a cd of them....but I do enjoy it on occasion.... love it with Somewhere Over the Rainbow!!!

You did a great reporting job, Jeannie! Also, you got excellent photos. Musicians move so much, it's hard to get a good shot.

Thanks for the coverage and the shout-out! It was fun to see your face in the crowd.

what a lot of fun this event must have been...you take us along for such interesting things Jeanie!

thank you for that
I really had some catching up to do here!
oxo

What fun! I've not heard much uke music before, just here and there in movies. Makes me want to look for some.