The Ride of Silence

Nine years ago, I was sitting at my office desk when the phone rang. It was Rick, who said he was in the hospital in Iron Mountain, Michigan, eight hours away. He had been hit by a car while riding his bike on a business trip in the Upper Peninsula. 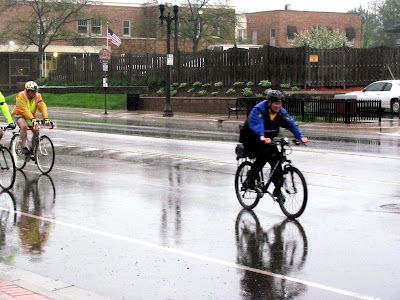 Rick's a good rider, a former racer. He's had spills and crashes before -- some serious, some far worse than this accident. It can happen to anyone -- stopping too quickly, a tire blows out, a skid on something slippery or rocky, a crash with several riders, hitting a stone the wrong way. 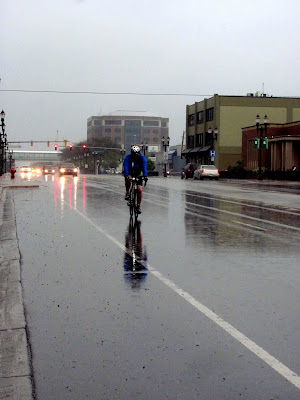 But this was different. This time, it wasn't anything to do with chance. A driver turned left, crossing his lane, right in front of him, as he came down a hill -- with the right of way. Someone who wasn't looking or thinking or paying attention. He went over the hood of the car, shattering the windshield. It wasn't good -- but it could have been fatal. I swear, he has nine lives. I hope more. 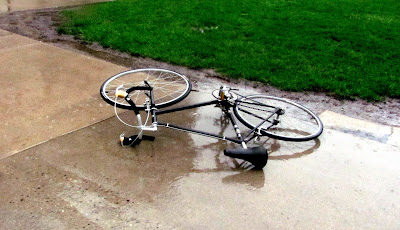 That's why, in the cold, pouring rain -- 59 degrees that felt like 49 -- Rick and a host of other cyclists, participated in the Ride of Silence. 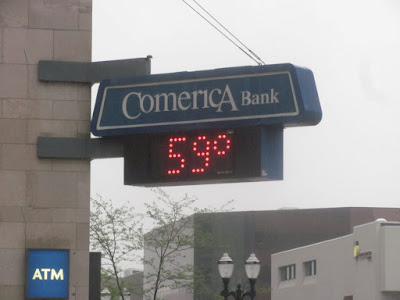 This annual event -- held worldwide on the third Wednesday in May -- is to honor bicyclists who have been killed or injured by drivers. 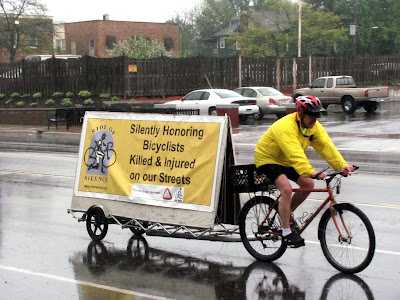 The group left the MSU campus and rode down the main east-west artery to the state capitol, where there was a program on the capitol steps. 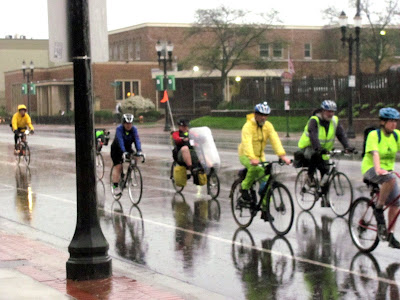 There should have been media or legislators to greet them, to support them. People who can make a difference, tell their story. Perhaps they were at the start of the ride, but no one but a group of intrepid riders and several policemen -- some who rode bikes, others who accompanied them by car -- came to the capitol. 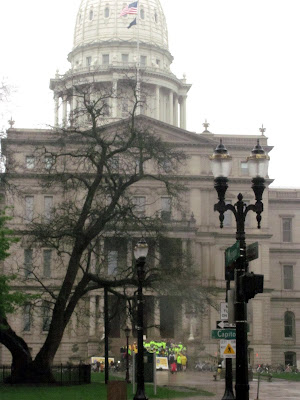 It's a shame. Media and legislators would have heard about Mason Barker -- an MSU triathlete who two-and-a-half years ago was hit by a car on a country road and was in a coma for five months. He is a bit of a miracle, recovering slowly -- very slowly. But recovering. 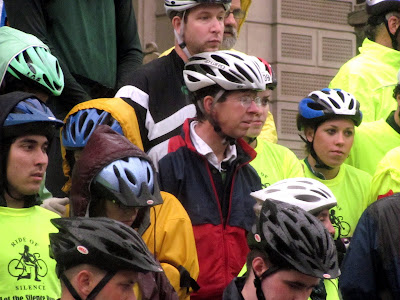 They didn't hear about my friend Jim DeLine, but they could have. You'd never know it to see him now, more than two decades later, but he, too, was hit by a car while riding. 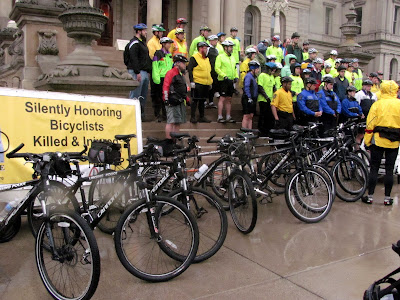 They didn't hear about a lot of people -- but I would bet that every single person on those steps knew someone -- or knew of someone -- who had been on the wrong side of a car. 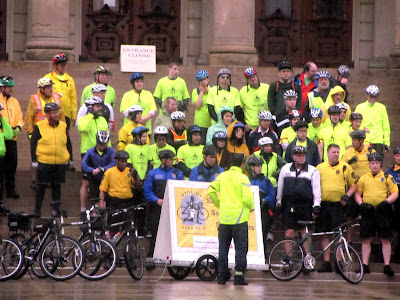 It's very easy for us all to get frustrated when we see riders "slowing down the traffic." We want to get where we are going as quickly as we can, and sometimes -- in our gas-guzzling cars -- we crowd them too closely. Some even try to push the envelope, saying they don't belong on the road. 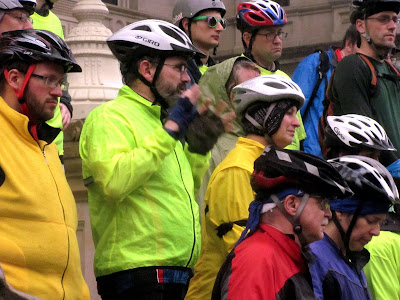 And yet, on their healthy, eco-friendly vehicles, bicyclists have as much right to the road as the drivers. In fact, they have the right of way. 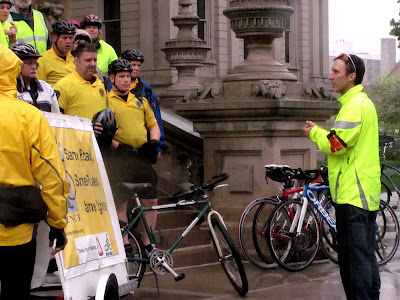 We all need to remember that.

I can't keep Rick off a bike. The fact that my heart sticks in my throat every time he rides is something I have to deal with, because to even suggest he not ride would be as cruel as locking a person in a tower. But I can ask everyone to think of Rick and every other rider when they see a cyclist -- and share the road.

(Note: Over on my book blog, Chopsticks and String, a look on another book about World War II -- the wonderful novel, "Sarah's Key.")
Posted by Jeanie at 12:01 PM

Thanks, Jeanie. I checked the LSJ archives for DALMAC 1977 when I was hit by a drunk driver. "Festive Bike Ride Takes Tragic Turn" was the article by Mike Hughes. I could very well have been "Fatal Turn." Please everyone, share the road.

Very well said! (And, by the way, I loved Sarah's Key)

Great Posting - Thanks for putting this together, you've summarized it very well...

Something for all of us to remember. Thanks for reminding us.

PS - my verification word is bikedis!

Very well written and what a noble cause and a good reminder for all of us to be more careful. I love that you are such a kind and caring person to alert us to this cause ~ blessings, Katie

My children have participate in such events. Thankfully, Rick was not seriously injured when he was hit. There are so many horror stories out there about bikers being hit and either killed or seriously injured.

I hope the efforts of those trying to bring awareness to others will be heeded by larger vehicle drivers. "Share the road!"

what a thought provoking
tribute to those back road spirits
who realize it's the journey,
the ride,
the process
that make life the beauty
that it is.
I'll remember this
every time I see a bike
and it's rider.
S-l-o-w-i-n-g down.
Thanks:)
-Jennifer

I am quite touched by this post, Jeanie. It's so important to be aware of cyclists. I saw a student on a bike get hit by a car at the corner of Collingwood and Albert years ago. Thankfully, he walked away, but his bike was crumpled. My sister who rides her bike where she lives in the Netherlands always worries about parked cars and someone opening the door. It really is a fragile situation. I think of Rick often since his accident last year. I didn't know there had been others.

And Don and I are riding in the Zoo-de-Mac tomorrow with thousands of others, the 51-mile ride from Boyne City to Mackinaw City! I am not ready for it, let's hope I finish. :-)

A very lovely post that makes the non-cyclist think.
Karla

SCARY riding in the rain... slick streets... good to see it doesn't stop those riders!

Wonderful post. Road safety needs to be constantly highlighted.
Thank you for stopping by my blog. I read your review of Sarah's Key on your other blog. I agree it is a wonderful book and one that stays with you for a long time after. I didn't know it had been made into a film and will look out for the video.

What a wonderful thing to do to call attention to somethign that is so awful. Thank God Rick has those 9 lives. I hope that's his last close call with death on his bike. So Scary. That guy I went on dates with in April told me how he lost a friend to a cycling accident. It was devastating to hear his story. :(

This is so very true. Here in FL we had a bike rider hit while crossing a bridge, a large van hit him and sped away, the man died 2 days ago. It was horrific watching the news replay the tapes over and over. I get that they are trying to catch the driver, but it was pretty horrible.

I'm glad your Rick is ok, this is a lovely tribute.

How wonderful that they do this. This is why I am afraid to ride bikes in the city. I am a cautious driver, but still have had a couple close calls with bicyclists. Most bicyclists know the rules of the road, but there are a few that I wish would learn them.

Thanks for this! A man in our county was killed last year by a young girl texting who swerved into the shoulder and hit him. Since Bob and I ride quite a bit, we're very conscious of bike safety (and always look out for drivers who seem to be coming a bit too close too fast). How scary that your Rick was hit by a car!

Great post- you know I'm in the same boat with you Jeanie. I'm sending a link to your post to Jeff- what dramatic and moving pictures.

Amen! And someday, maybe we'll have paved trails, completely set apart from the roads that cars use, that allow cyclists to completely navigate a community in [smog-free] peace.

Yet another wonderful post! I'm so glad he made it. I always want to ride my bike places, but our roads rarely have a shoulder and it makes me really nervous. I read an article about how our brain works and it said basically that we see what we expect to see. People rarely expect to see a bicyclist or motorcyclist. And that is why so many are hit. If you think about it how many times to you hear someone say "I didn't see..." What they really mean is "I didn't expect to see it so my mind blocked it out".

I just read all the posts I missed on your blog. You certainly had a nice party for The Wedding. We were lucky that we were almost on the same time as England (just one hour ahead.)
While in Paris I noticed more bike riders than before. There are also bikes you can rent – they are placed in many areas. Drivers are used to bikers so they are careful around them. Here I don’t think I would ride a bike on open roads, the car drivers think they own the road. Another thing while in Brussels – for 2 days – I made a point to see how many SUVs I could see on the road – after 2 days I had only seen two!

such a wonderful tribute

riding in the rain made me think of 'tears from heaven'

Good story. My brother was a bike rider but quit some time after he was involved in a hit and run accident which thankfully resulted only in a concussion and cuts and bruises. We do live in a rural area, so it is even more dangerous. He got all the athletic, exercising genes in the family, I think. So glad Rick recovered and is here with you today

This was such a touching and thought provoking post. Since I became such an avid walker, I have become more sensitive to pedestrians and bicyclists when I am driving. Drivers can be very rude and selfish of the road. Then I also want to point out that just in the last couple of days as I walked, I saw one guy on a bicycle not stop at a stop sign and another went right through a red light. Not good!