As those of you who have read the Marmelade Gypsy for close to two years (and thanks!), you know I have had a love affair with France since I first stepped off the plane in June 2009. (You can see all those posts under various labels of France, Paris, Giverny and Normandy). 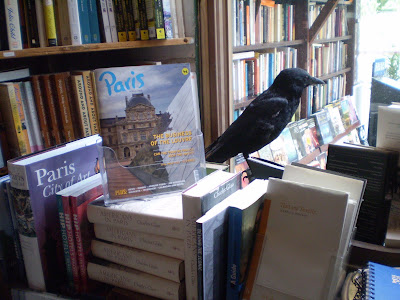 I spent two weeks discovering most of the things tourists do -- 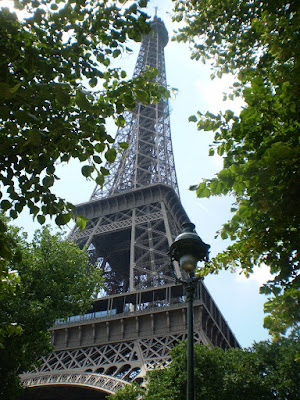 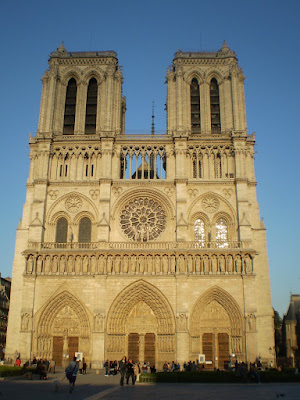 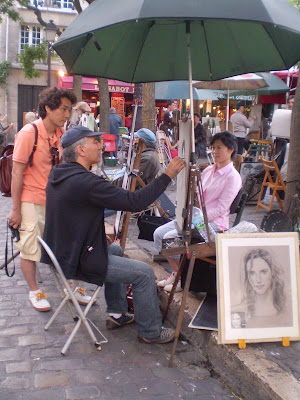 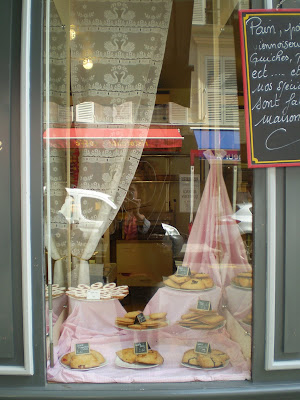 And some they miss, like a Vivaldi concert in Ste. Chappele. 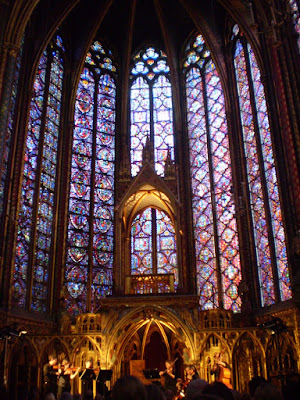 My friend Jerry has invited Rick and me to return. It will be Rick's first trip to Paris and with or without him, I'm going. So I want to be prepared. 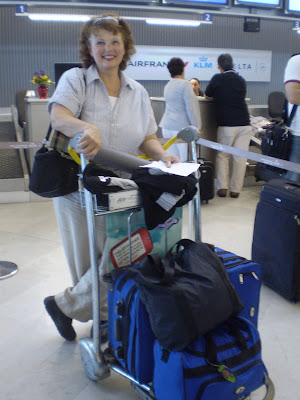 This is my French class. 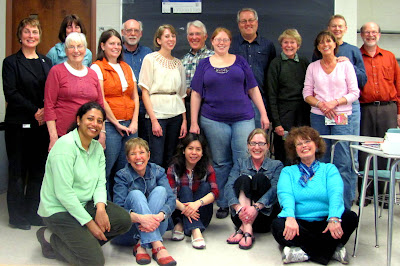 For the past ten weeks, I've been learning conversational French with these folks. I can't say a lot (and if anyone speaks at a normal rate of speed, I'm in trouble!), but I can do the basics -- more than hello, goodbye, please and thank you.

The best part of our class was the presentations everyone does each week. I've learned about artists, filmmakers, places in France, historical spots, good books about Paris, food, Christmas in France and about countries where French is spoken, like Mauritius, St. Maarten, Ghana and others. I did mine n shopping and flea markets. 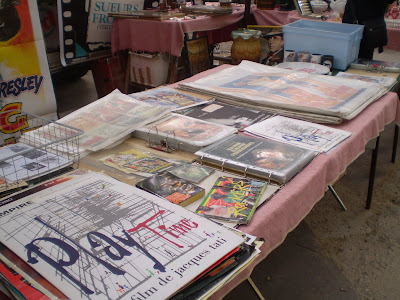 Our final evening was quite the gala with five presentations, including one close to my heart: French wine! (for my other wine posts, see the label column under "wine" or "Cork Poppers.") 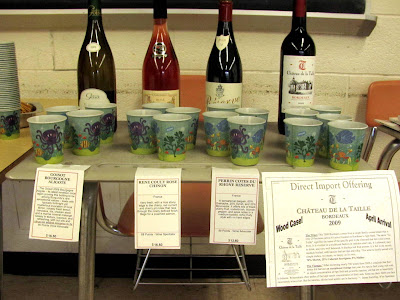 We learned about the region's wine, which grapes are from where, and tasted for French wines, along with treats provided by our teacher, Sandhya. 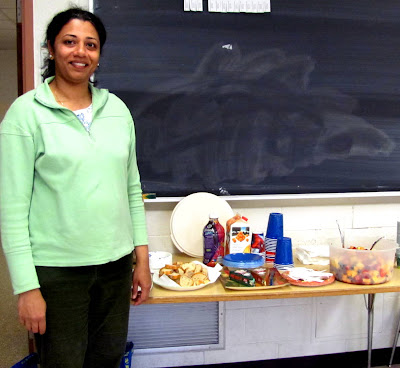 I didn't taste the white, but the others were good and of the three, the Perrin Cote du Rhone was my favorite. 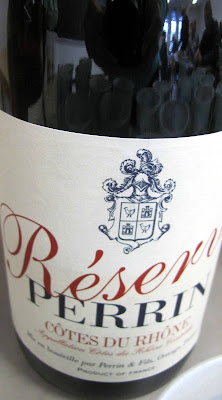 I've had other Perrin wines before and they're always quite good. 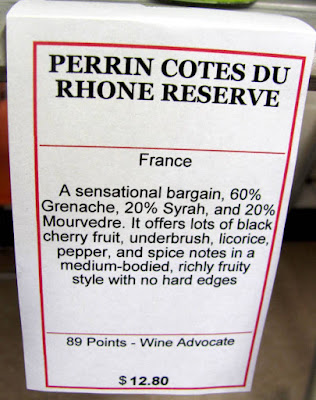 Rene Couly Rose Chinon was a nice Rose at $16.50 and 88 Wine Spectator Points. 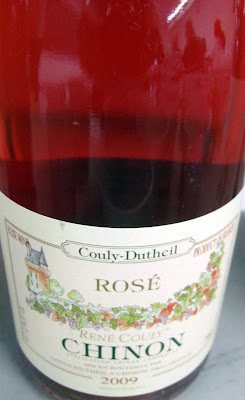 I also enjoyed the Chateau de la Taille Bordeaux 2009. I think this was in the $16 range, too, but I forgot to copy it down! 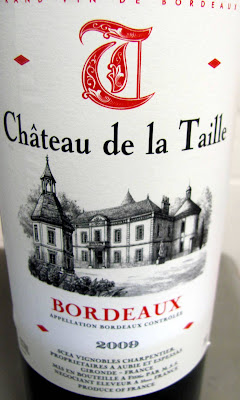 We laughed a lot and watched the film "Grand Illusion" by Jean Renoir, son of the famed Impressionist painter. Set during WWI in a German prison camp it was pretty funny and clever. But we didn't have time to see the whole thing, so there may be a catch-your-heart end. 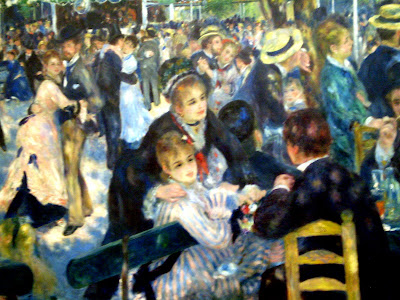 I'll my ma classe francais et mes amis as much as I miss Paris. Although I probably mutilated that sentence!

NOTE: Just posted at Chopsticks and String: Stephen Sondheim's "Finishing the Hat."
Posted by Jeanie at 2:27 AM

When are you going? I'm already looking forward to the pictures and the stories.

I haven't been back to France since 1981! My husband retires in August of 2012 and it is on my list! I have only fond memories of France and would love to return just to paint. How great that you have a friend there! What fun!

Oh how fun! I love the story about the French class. Have you ever read "Evening Class" by Maeve Binchy? It is such a cute story about an Italian class.

My hubby and I were in France almost one year ago. I loved Paris. I do want to go back. I am so happy that you are going again.

I just finished reading "The Paris Wife." I was disappointed on how little there was about Paris in the story.

I think it's so great that you took this class! I would love to take a french class. As you know, I am a fellow francophile, and I know I will return to Paris, so I should pick up a bit more of the language. I got by with what I know and a phrase book, but a better grasp of the language would help!

Hi, Jeanie! Thanks so much for visiting my place yesterday--fun to see you there. :o) HOORAY... so glad you're going to Paris! And loved hearing about your French class and all things Franchophile. I took had French for 4 years in school and loved learning the language. I can still read a good bit of it, but don't ask me to speak it. ;o) Two Christmases ago due to bad weather we got stranded in Paris at Charles du Galle airport trying to connect from Europe to the USA... sadly, we had no time to really go into the city. We must get back there. :o) Keep us posted on your trip!

how fun to be invited to return! i'm so excited for you :)

Your french class sounds like so much fun. I wish I could find a class like this in Italian. Before we went to Italy, I practiced and practiced with the Italian lesson tapes, and I did pretty well over there, especially when we got lost. However, I have lost most of it now. You have to keep practicing. I'm envious that you're going to Parish again.

Much as I love France and have a background in French, the conversational class I would like to take, now that I'm retired, is Spanish. It would come in very handy in my part of the world.

The pictures of your mom by the lake are so touching. Yes, I would not dress up for a beach trip either but oh the times were different, weren't they. You have your mom's big and wide open smile and sparkling eyes.

What fun! I hope Rick is able to go along too. And good for you for learning French. I have always thought it was such a beautiful language.

How wonderful! I was in France last August and just loved it... we were in Provence and of course, Paris. Have a marvellous trip there. I look forward to your travelogue.

Gosh, I am behind on my blog reading, blogging too for that matter! We were without power for 5 days after the storms. How wonderful that you will get to go back to Paris again! You can take time to go to the out-of-the-way places and sounds like you are preparing yourself to be more at home!

How fun to read and see...and how envious am I!!! I am still waiting and planning for my first view of the Eiffel Tower! What fun and i know you will share it all with us! Your class sounds like something I shoudl look into. I know I would enjoy it!
Love,
Sue