London: Doing Our Own Thing

David (of the incredibly beautiful "Travel with Birds") asked "what was Rick doing while you and Jenny were out at Kenwood House?"  Well, you can't keep Rick off a bike or away from music for long. And if there's a garden to see, or a historic house, I'm all for it! 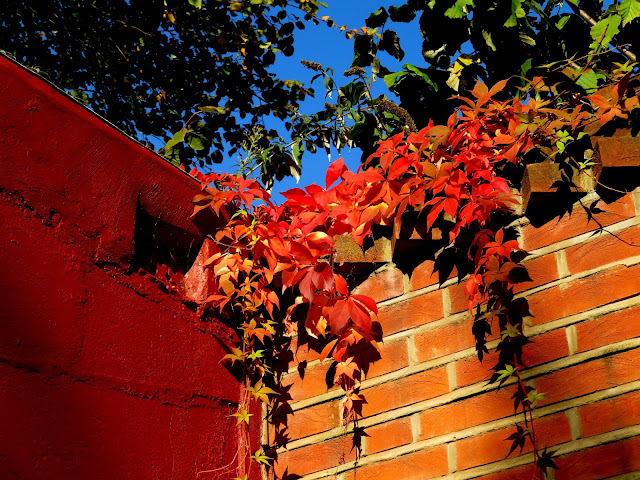 So on our second day with Jenny and T, we split up. Jenny and I went to Kenwood (HERE) in the morning while Rick and T hit the road on bicycles and ventured into and around London. 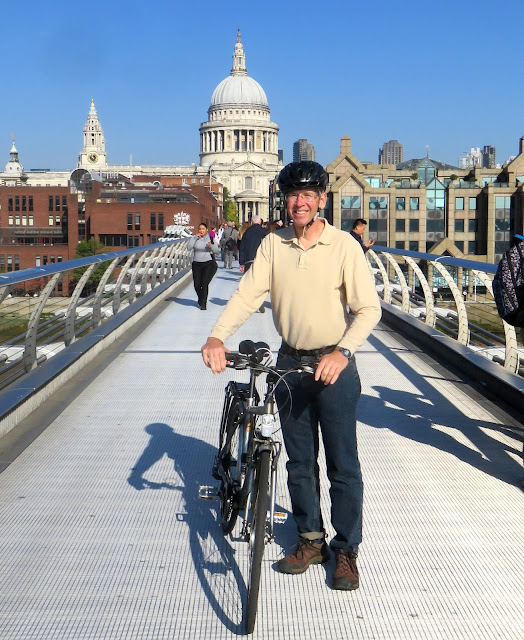 Let's just say that I preferred not to think of him riding around on the opposite side of the street (we Americans drive on the right, the Brits on the left!). But I knew he was with an experienced rider, which helped tremendously. 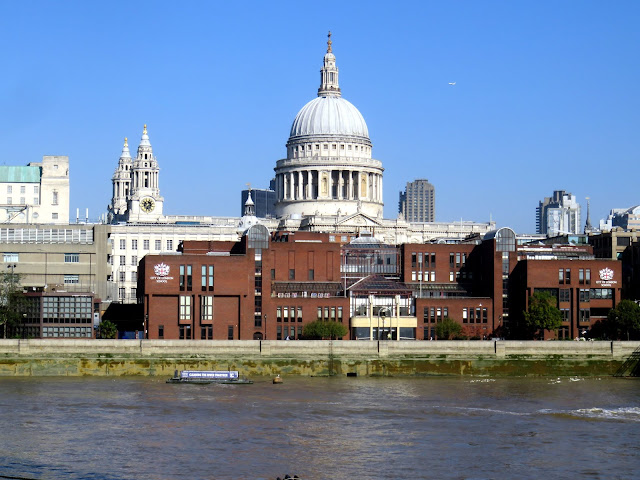 In the afternoon, the guys went to Fenton House, a National Trust property in Hampstead, known for its collection of early keyboard instruments. One of the bonuses of visiting is that these instruments, such as the harpsichord here, are often played for guests, and which Rick and T enjoyed. The house also features an extensive art collection but all I heard about from Rick were the instruments! (For more about Fenton House and an apple festival, check out Jenny's post HERE.) 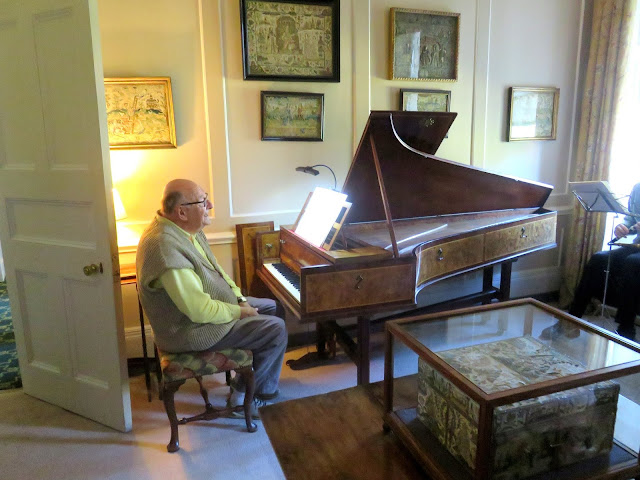 Jenny and I stayed back at the house and she took me through her garden. OK, not her totally personal garden, but the communal garden for the area she lives. But I like to think of it as Jenny's because she is one of its primary tenders, doing much of the planting. 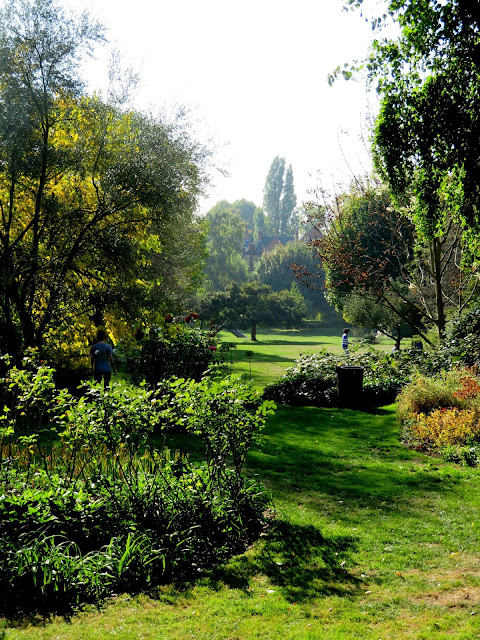 And it was beautiful. In those last, lingering days of the flowering season -- early October -- it was in full bloom. 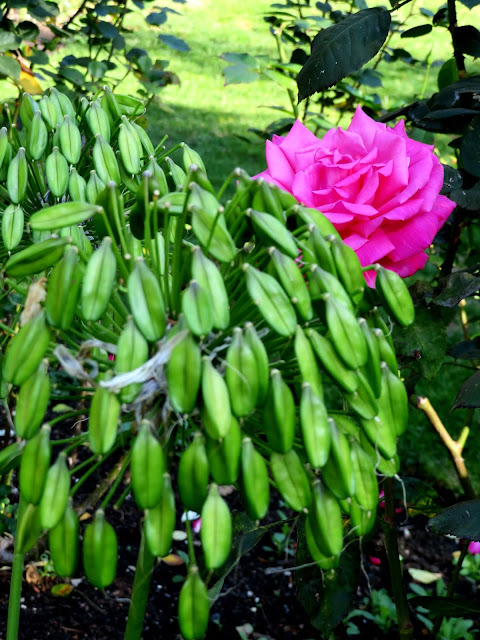 The roses were especially beautiful and still going strong. 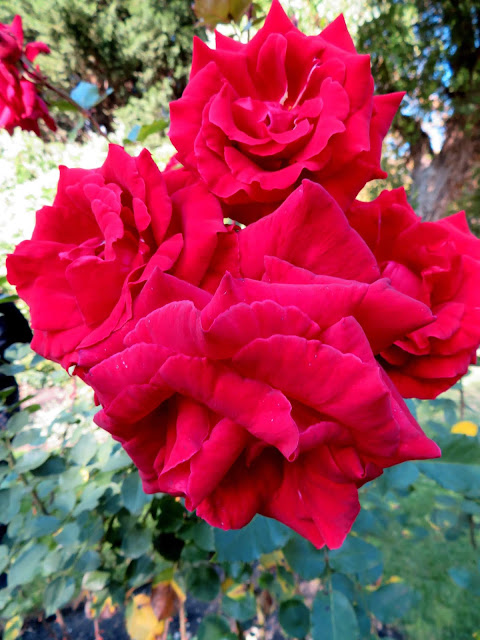 The Indian Summer certainly was keeping gardens looking their best! 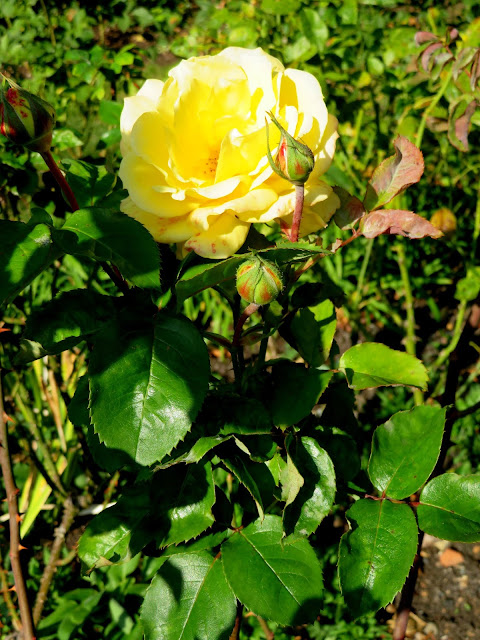 I love nasturtium, so this made me smile. 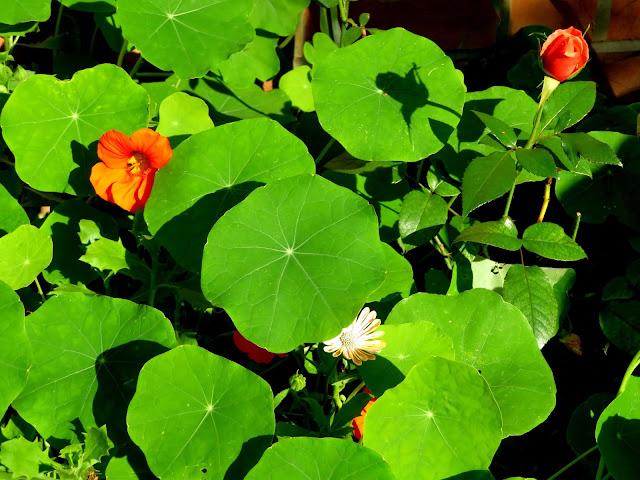 And so, too, did this massive rosemary plant that was nearly as tall as I was! 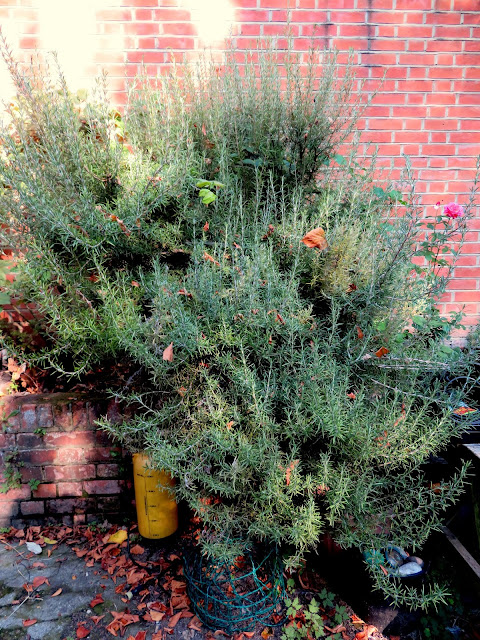 Parts of the garden are surrounded by hedgerows, making it very private. 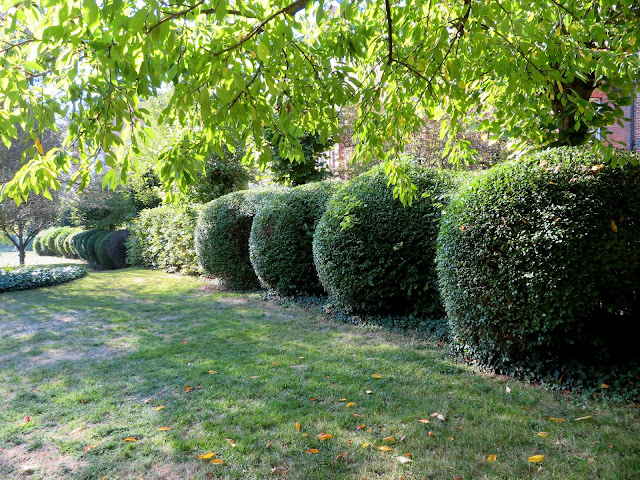 And yet on the day we visited we saw people walking, reading, with their dogs and with their children. There were spots to sit and savor. 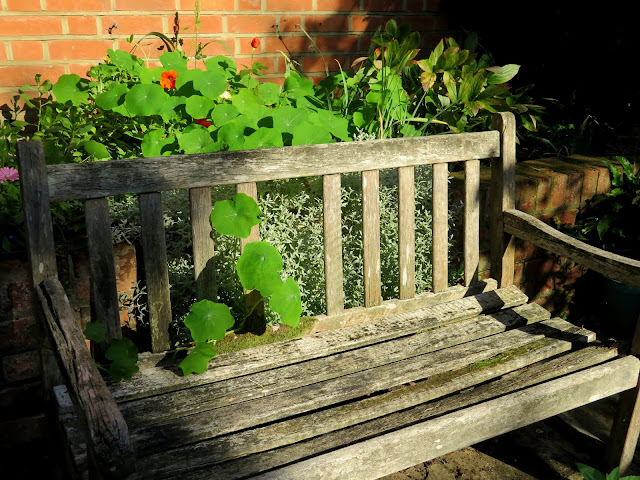 And just walking through reminded me of how important it is to have your green space when you live in the city. Outside the enclosure, the city was bustling as all major cities do. 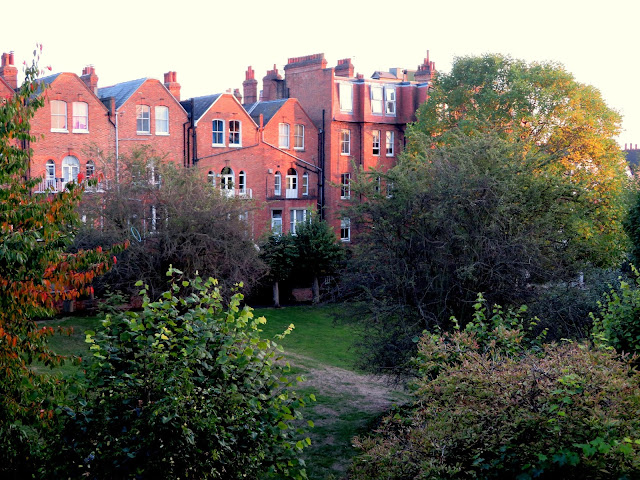 But within, tranquility and peace. 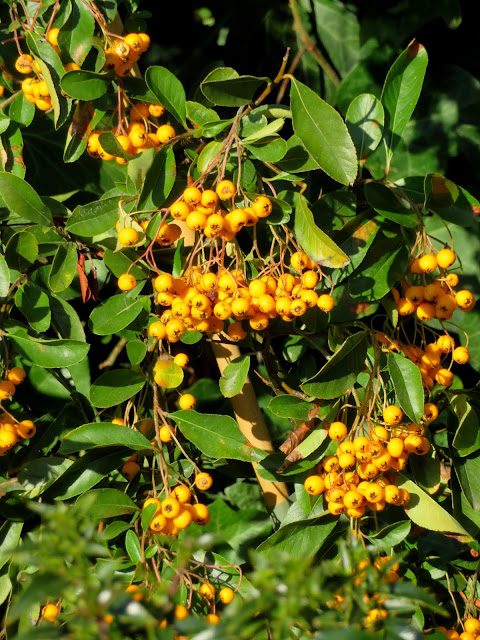 And a lovely way to spend an autumn afternoon. 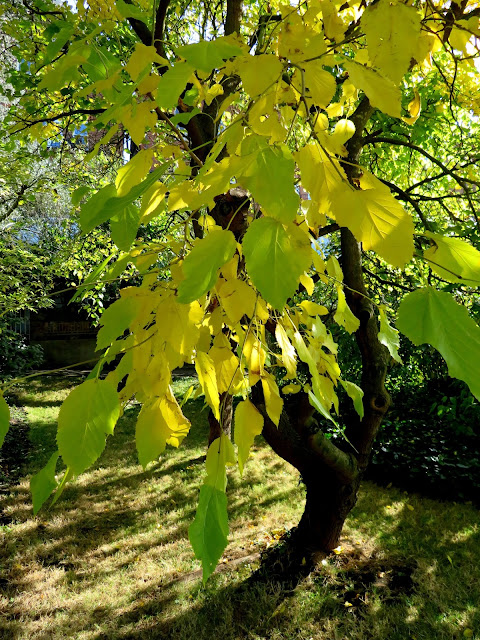 (I would have said more about Rick, but he didn't take many photos!) When we return to London posts, we'll move to a London hotel -- and one I'd highly recommend. But for the next couple of weeks, I'm going full-on Christmas! Because it would look really weird if those showed up in March!)

Loving all the colorful flowers, ours are gone and have been gone for a while now. Looks like you had an amazing trip.

Thanks for the plug, Jeanie. The garden looks quite splendid and I could have easily spent the day with you there, or I could have equally derived great pleasure from looking at the musical instruments with Rick. I always have mixed feeling about harpsichords, however, although I have heard some excellent interpretations of Bach on them. They often seem a little jangly to my ear, and someone once described the sound made by a harpsichord as two skeletons making love on a tin roof! I would have had no doubt that Rick would handle traffic with aplomb - and he obviously did. We drove on the “wrong” side of the road in Australia and didn’t risk life and limb any more than once a day! I thought about Rick this morning actually. I was at my favourite baker picking up freshly made bread and I wondered whether it would meet with Rick’s approval. If ever his bike brings him anywhere close to Waterloo he had better have a loaf in his saddlebag! Enjoy the weekend coming up.

I love it all but especially that hedgerow!

Good travel hints. As usual, I love the photos.

Glad you were able to see so many beautiful places. The gardens are gorgeous. I used to ride a bike through London as a kid, I'm not sure I would do it today! Hugs, Valerie

Oh, yes, that´s awaiting me, too, the Aussies drive on the left also!

I agree. Enjoying a quiet time off is really a good and wise thing to do.
(But Christmas-pics in March... why not? It´s be bring back the jolly time)

That's great that Rick was able to explore the city on bike with a seasoned rider. It's nice when a couple can split up and do their own thing when their have different interests that don't quite overlap! Then everyone wins!

That garden is so beautiful! That's so cool that your friend is so involved! What a great way to give back to her neighborhood. I love shared green spaces in cities. Proximity to a park is something that really matters to us when we are looking for our next home because we know our yard will be really small and likely won't have room for a play set. So being able to walk to a local park will be important!

I especially like your tips, Jeanie. I loved the garden, and all the beautiful photos you took there. I also love to visit places not shown on travel maps or travel magazines. They turn out to be the most special, in my opinion.

What a fabulous garden!

Touring a city by bike would be one way of seeing what you wanted to see. Beautiful photos!

Hello, the garden views are lovely. I think seeing London by bicycle could be interesting. I would want to stop and take too many photos. I agree about having greenspaces in the bi cities, it is important. The hedgerows are beautiful. Lovely roses. Beautiful photos and post. Enjoy your day and have a happy weekend!

Those gardens are very well looked after!

Looks like Rick and T had a fabulous bike tour. Jenny's garden is superb! Wow, I would love to look out on that garden every day :-)

Your adventures are exciting and beautiful.

Thanks for the tips and the pictures, Jeanie! I would have enjoyed wandering around that garden. I agree that taking it easy for a bit is just as important as seeing the sights. I found it so interesting to just go through a grocery store in England and a little corner shop. -Jenn

Seeing the garden is a treat. You and Rick travel smart being able to seperate. It is sometimes much more rewarding to slow down, isn't it? I love doing more "local" things. Thanks for taking us on a little fall journey on a dark december night. Hugs-Erika

Sounds like you two both had a great day! I enjoyed the pictures of the garden area. Glad you clarified that it was in October because I was curious about how green everything is there at this time of year! LOL...

Driving on the left is very sensible, stops us running into the people going the other way! ;p

Tehe rosemary is just like that in Provence..Looks like you two had a ball..
I have loved meeting a friend for a day while traveling..it made the trip even more special..but we would never travel WITH someone ...apart from Jacques or my daughters.

Jeanie, I have thoroughly enjoyed your traveling post. I would have loved hearing the harpsichord. Wow, what a gorgeous communal garden tucked right in the city. It was particularly lovely on that October day!

Sounds like a lovely day was had by all.

I admire everybody who actually dares to ride a bicycle in London. The traffic is crazy - even driving a car can be challenging, but a bicycle? Wow. I'm afraid my biking husband would just do that...
I'd be in the gardens tough. Those are the lovely places, and the English just know how to garden. I have yet to see an English garden that I don't like.

What a colorful and interesting time you had!! Oh, the colors in that garden!
I agree with you. My J and I travel this way. Once he actually took an afternoon bus trip while I hung out and sketched in the French town in which we were staying. And coming back together is part of the fun of separating!

So pretty, Jeanie. Even though London is a big bustling city, I always think of England in the terms of its countryside. That beautiful garden is a perfect example. It sure looks like you took advantage of the best that your vacation had to offer..Merry Christmas. I have enjoyed it all. xxoJudy

What a glorious garden. I love rosemary 'bushes':)
Great pic of Rick.

How special to have a friend to venture out and about with while Rick rode with another friend. Those are the things that make travel so extra special.

Oh, I miss London so much...
I think I was born in the wrong country, haha :D