Paris: Around the City!

Saturday morning was bright and beautiful and a terrific way to start the day was with a visit to the Orangerie, the lovely art museum adjacent to the more contemporary Jeu de Paume. where one can step into Monet's canvases. 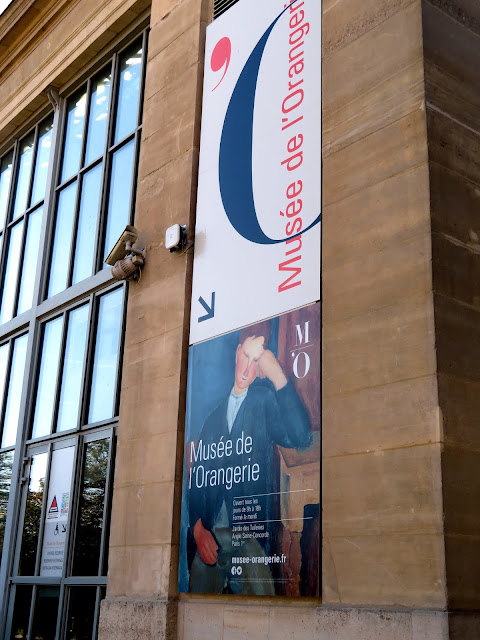 Well, not literally. But you can step awfully close! 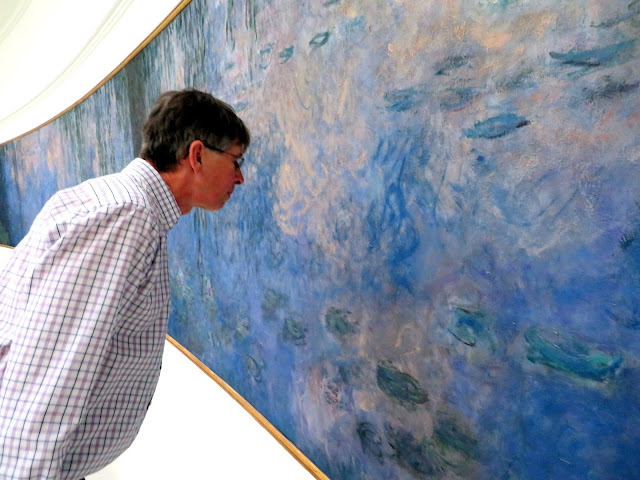 If Jeu de Palme (which we didn't have time to visit) sounds familiar it may be because during World War II, the Nazi's used it to store paintings looted from wealthy Jewish families and dealers, a story told most recently in the film "The Monuments Men." 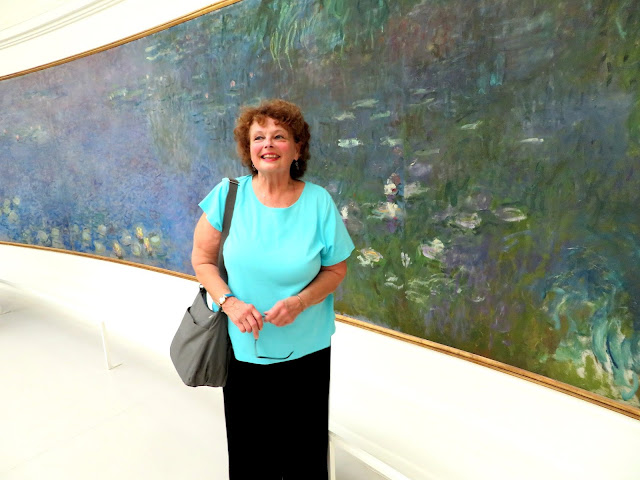 After the war it housed many paintings which later went to Musee d'Orsay and today it is the home of paintings by Renoir, Matisse, Cezanne, Utrillo, Picasso and Modigliani. 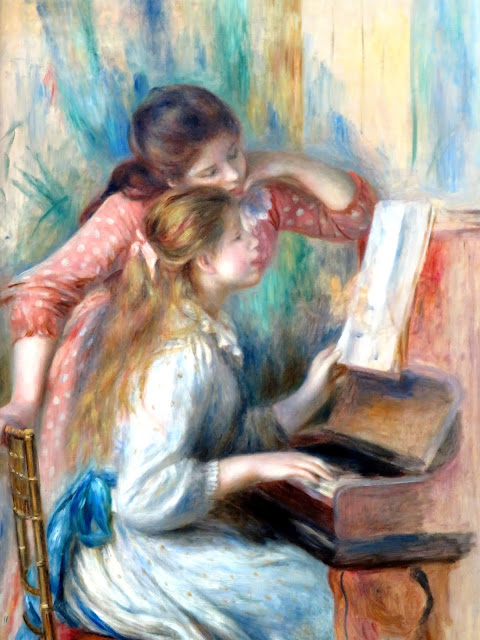 I wanted to see the Monets. He had donated them to the government as a monument to the concluson of World War I and they were installed at the Orangerie at the suggestion of Georges Clemenceau. The canvas panels are enormous and take up two rooms in the museum with its curved walls and natural light giving a depth and dimension to his work that a flatter surface might lose. 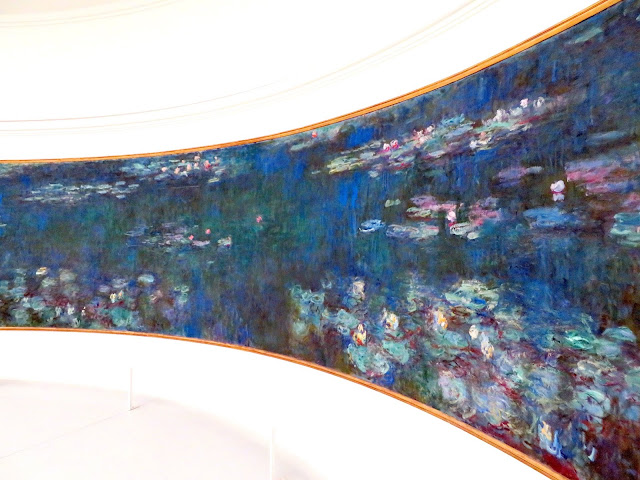 Favorites of the painter, he kept them until his death in 1926, after which they were installed in the museum. One of the panels was damaged during World War II but immediately restored. 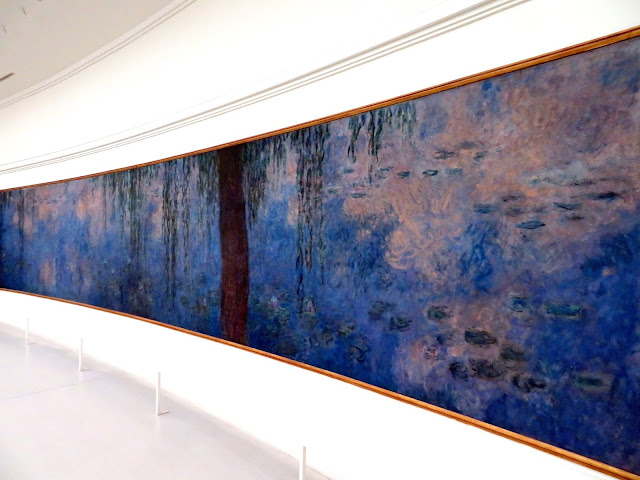 For Rick it was all about the Modiglianis, an artist we both enjoyed ever since seeing the film about his life with Andy Garcia one day when we were searching free movies on demand! 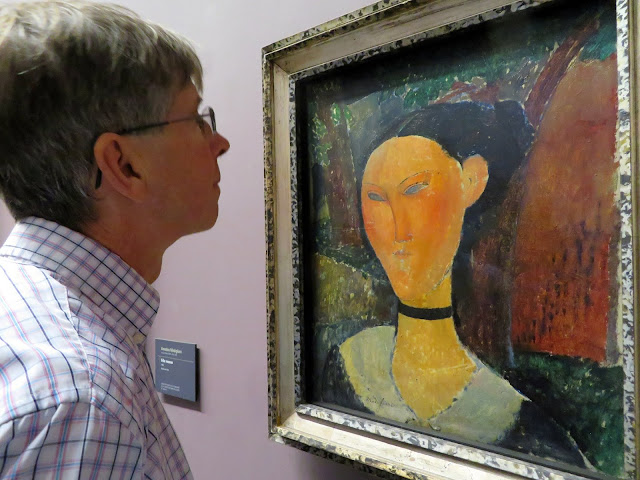 I love Modigliani, too. There is something about the flat simplicity that I really appreciate. As I look at some of the paintings, especially the long-necked women, I am often reminded of the work of contemporary artist Kelly Rae Roberts and wonder if she pulled a bit of inspiration from Modigliani's work. 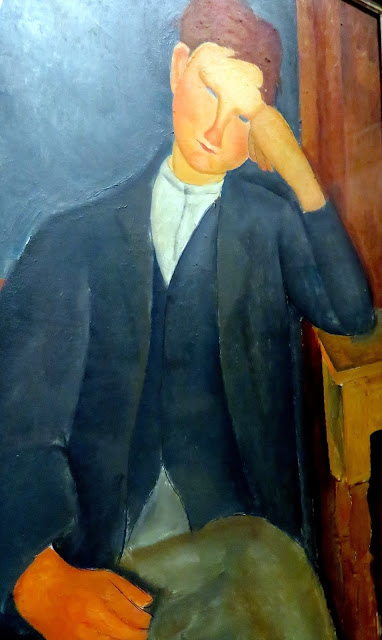 I was especially thrilled to see many pieces by Maurice Utrillo, whose cold Montmartre landscapes speak to me. Utrillo had a pretty bumpy life. He was the son of artist Suzanne Valadon, who also modeled and was a contemporary of Toulouse Lautrec, Degas and others of the period. Valadon encouraged her son to paint, partly to remedy his alcoholism, which appeared fairly early in his life. 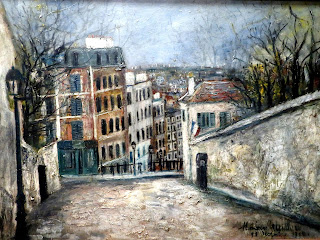 He was periodically in mental institutions and experienced numerous detox periods during his life but painting did indeed help him to overcome the struggles of daily life. 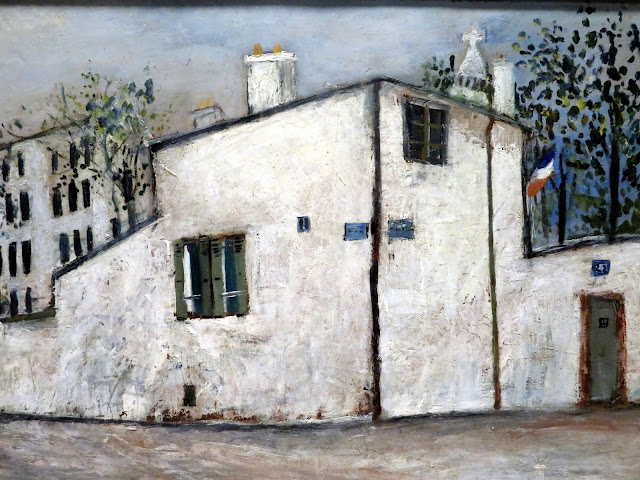 Most of the paintings in the Orangerie were from his White Period. 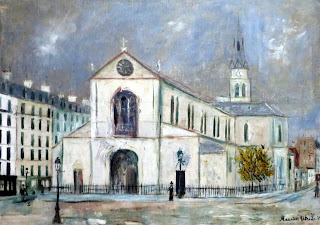 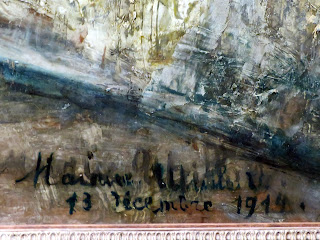 Or on occasion, adding a "V" after his signature, for Valadon. 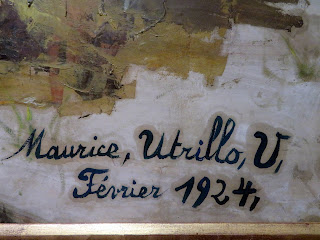 and sometimes just M. Utrillo, other times including a date. This variation can make it tricky for authentication! 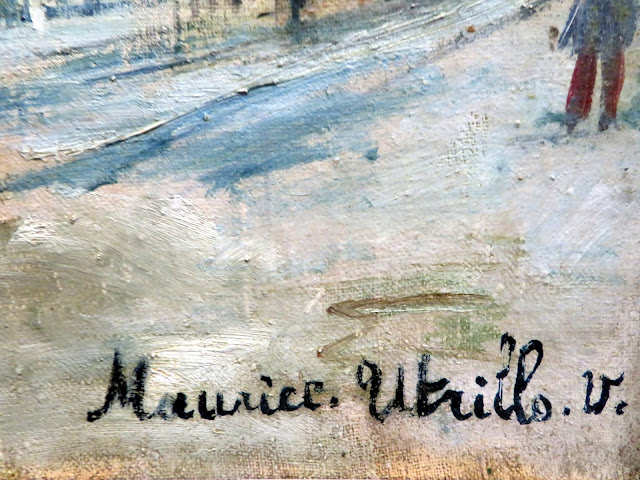 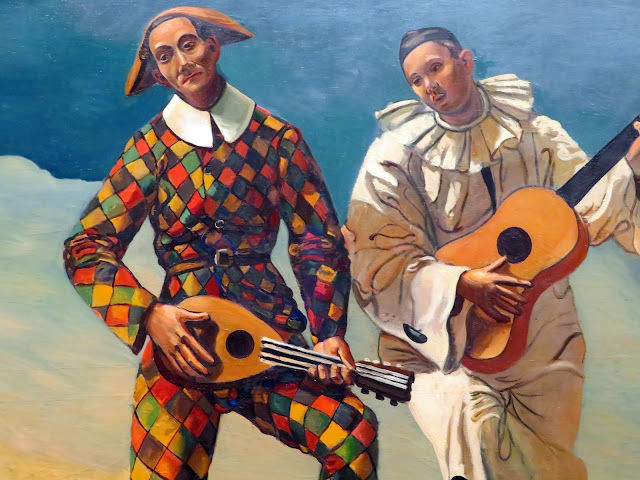 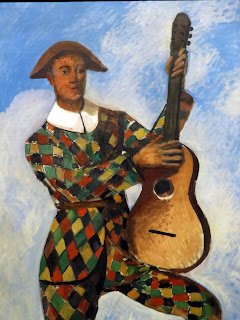 I loved the Rousseau. 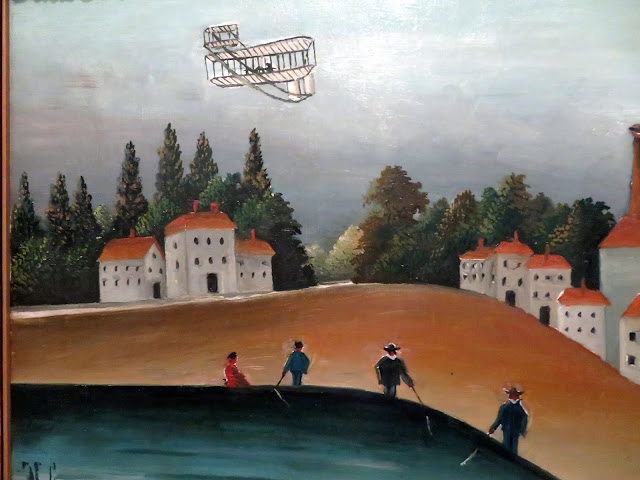 And of course, the Renoirs... 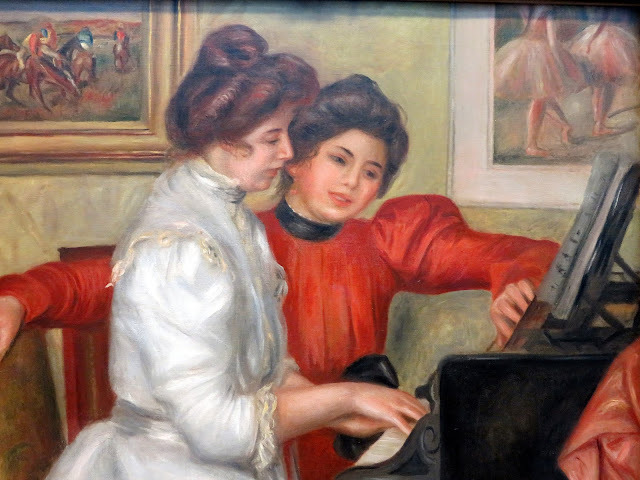 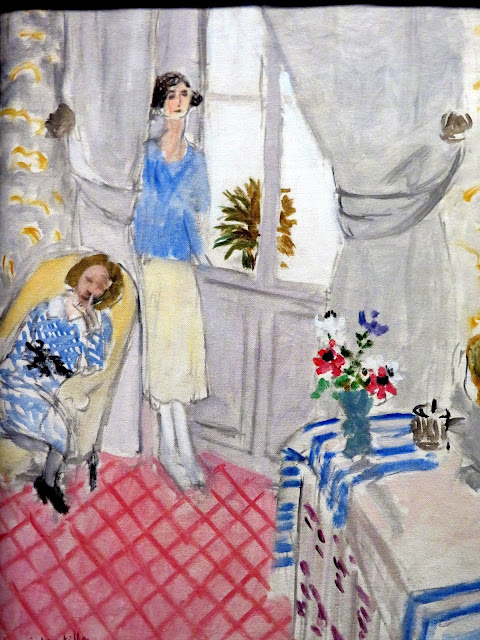 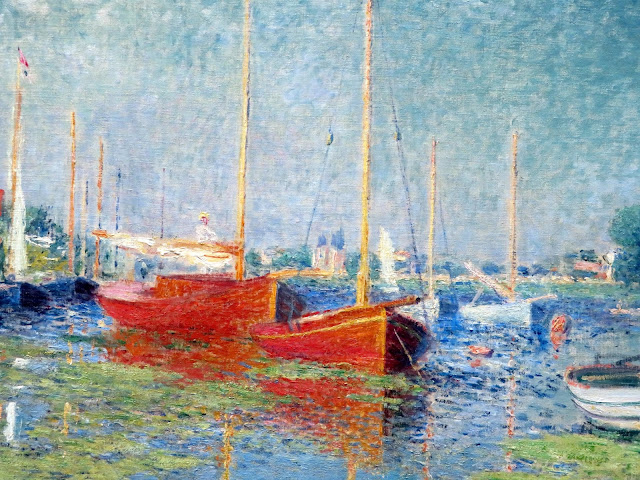 But there was more art in store that day! Because after a luncheon reunion it was time for Sennelier. More on that next time!

What a wonderful opportunity to see so many of the world's best works of art all in one place.

What a fantastic museum you visited, how lovely to see all those fabulous paintings, wow! Hugs, Valerie

You two look so happy, wonderful :-)
The last work is my fav (I guess).

Great visit to the Museum.
I'd never seen a painting being displayed on a curved wall, but it does make it more interesting.
I like Renoir and Monet's paintings.

This looks like museum I would like as I enjoy art from that period of time. You saw some beautiful pieces of art. I swear I've seen this large Monet panel, although I know I haven't visited this museum. Maybe I am thinking of something else or confusing it with a photo I have seen. Hmmm. Thanks for sharing Jeanie. Hugs-Erika

I am sure that it was a marvellous experience to encounter these wonderful works of art, true representations of what constitutes western civilization in so many respects. If I might say one thing, Jeanie, learn to speak French before you go back. It is not so hard and will enrich your experience immeasurably. Avec mes très sincères amitiés. David

What a beautifully spent morning!

Looks like a very perfect museum..these works of art are so awe inspiring..Having just been to St-Rémy as you know and visiting Van Goghs' place of retreat for 1 yr at the asylum..I read up when I returned..sad..:(
I have just run into an aquaintance that I have not seen in months..she said she read Lisettes' List because of me and loved it..I said YOU had suggested it..see?:):)

WOW....great paintings and aweseome that you were able to view and enjoy them. Thanks for sharing.

What a wonderful excursion Jeanie, and how wonderful that you and your partner can enjoy these things together! It must have been so inspiring to be in the presence of such masterpieces. I did a course based on the art of Modigliani once and I really enjoyed painting in his style. I guess I love all kinds of art. I think Money is the one who speaks most to my soul. Thanks so much for sharing this! I really enjoyed it! xoxo

Wonderful paintings, the museums in Paris are wonderful

Such great art! How wonderful to see it first hand.

The art in Paris is stunning. I was immersed in it's beauty while there. I have a print by Maurice Utrillo that hangs in my home and my Mom bought in the 1960's. Always one of my favorites. How wonderful you saw his original paintings.

Since we were just there, this was a special little visit back. Loved the l’orangerie and the Orsay. Moved by so many wonderful artists but must admit that Matisse is not a favorite of mine. The Rousseau was quite lovely, wasn’t it? Thanks you for sharing your trip bit by bit.

Thanks for refreshing my memory on this wonderful museum. How I love all these artists. I also love the Montmarte Musee too just because I learned so much about Suzanne and Maurice there. Just sitting here remembering it all and that very large Monet painting. Oh the light was spectacular in that room. I don't think I would have thought about Kelly Rae Roberts in that picture, but you are right. She use to live very near me, but is moving to a small community in the Oregon mountains. I have been in her studio and also met her mom.

I really enjoyed visiting your blog and looking at all these beautiful paintings. Thanks for sharing. Enjoy the rest of your trip.

These are absolutely STUNNING. I have seen several Monet lilies, but none that compared to the ones on the curved walls. This was fabulous. You gave us an incredible array of stunning art in this post, and I would be hard pressed to say which one I preferred.

you look very happy in the pictures, I am so glad y'all got to have this trip and that you enjoyed it and it was a safe one! Glad to have you back though!! Thank you so much my friend for stopping by and your kind sweet words today during my sad time. Losing Gypsy has been hard, awful hard. Almost 18 years is a huge chunk of time...your'e right-- our love was a gift, it really was. she will never be forgotten. Now I want to know about YOUR Gypsy story---is it on your blog and where can I find it please?

P.S.--I did love looking at the paintings!! The piano one is my favorite!

Jeanie, thanks for the tour. I feel so fortunate to have visited this very special place. I enjoyed seeing some of my favorites here, I would love to visit again someday! What a special trip this must have been for you. Now, I have a lot of catch-up from your trip.........Glad you home safely.

Ah! Some of these are like seeing old friends again! I love going to the Orangerie - as well as Jeu de Paume. The Monets are, indeed, spectacular and it was a treat to see them again in your photos. How did you manage to be there with so few people?! I'm envious.
I must admit that I was gobsmacked when you mentioned you made it through before lunch! LOL You must have been there the second they opened the doors.
I hope you had a chance to also go to Musee d'Orsay - it's actually my favorite museum in Paris - and not only for the art - I love having lunch there LOL.
Looking forward to your next post!

Beautiful!! I think seeing some in person would be surreal!

So much art to drool over in this post, Jeanie. I especially love those curved walls with the Monet. Oh to be a fly on your shoulder.

What a thrill to see these masterpieces up close and personal! I feel like I'm almost there! Thanks for sharing Jeannie!
Jenna

Jeanie, thank you for taking us to Paris! I love Monet and I have never seen his, or anyone's, paintings displayed on a curve! Your photos are wonderful.

I love those Utrillo paintings especially! What a fabulous experience! I enjoyed this post very much! Noticed your comment about snow on Diane's blog. Same here in NW Wisconsin. I've got to come up with a better plan for dealing with winter.

Jeanie, what a feast for my eyes this morning. What a fascinating museum with some of my favorite artists. Renoir always speaks to me. I can’t wait for more!

It would be hard to choose a favorite artist or painting. Each one puts you in a different mood. I love the white paintings...oh and Monet of course! Beautiful photos my friend!

Ahhh..so many wonderful paintings! I'm sure I'd spend days in that museum. Thanks for a wonderful peek inside, Jeanie!

Beautiful museum. Thank you for taking us there.

Oooohhh....this was pure JOY, Jeanie! For me it's all about the Monets and the Renoirs. Just sooo beautiful... *sigh*... Thanks for taking us there! :) ((HUGS))

A beautiful and interesting post, Jeanie! Utrillo was one of my first connections to my love of Paris when I was in jr. high school...I didn't get to go there until many years later....Sigh...You are making me want to go back...

Gah, such beautiful pictures. l'orangerie is one of my favorite museums. It's a toss up between that and d'Orsay. I like those museums because they are less overwhelming and have fabulous collections of my favorite artists. I'm an impressionist girl! Seeing Water Lilies in that circular room is just amazing.

Thanks for sharing your trip with us! It's nice to experience Paris through your eyes!