Some things defy description. There are simply no words. 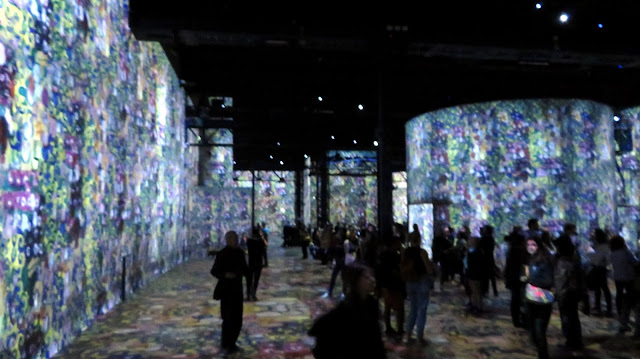 The Atelier des Lumieres did that for me. It was my favorite thing in Paris. I would go back if I could. (The Klimt closed in January but the current experience is VanGogh and I would go in a heartbeat. That runs till December.) 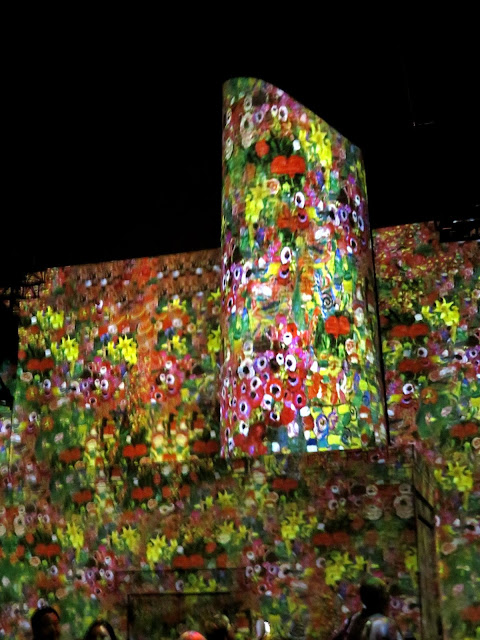 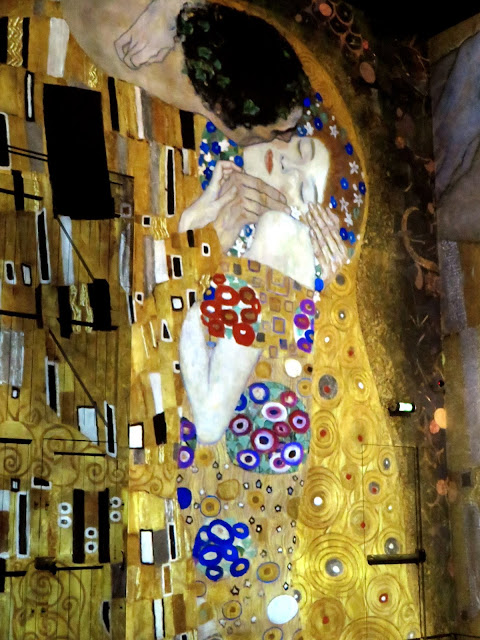 This was the one event I wanted a ticket for. I had such high expectations and that's always a dangerous thing. 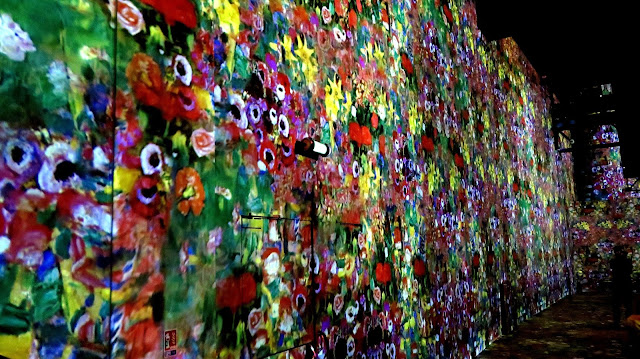 Fortunately, I was not disappointed. In fact, I was overwhelmed. 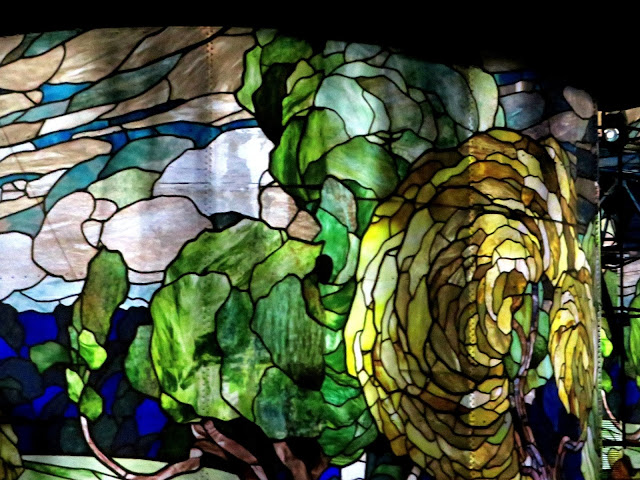 You enter what was once a former foundry, built in the 19th century. It is enormous, with tall walls, some in the middle of a room. I would say it completely dark in the room, and in a way it is. And in a big way, it's far from it. You find yourself surrounded by light and images, playing out on all surfaces, the walls, the floor, the faces of those in attendance. The exhibition is described as "Immersion of Art and Music," and it is a perfect description. 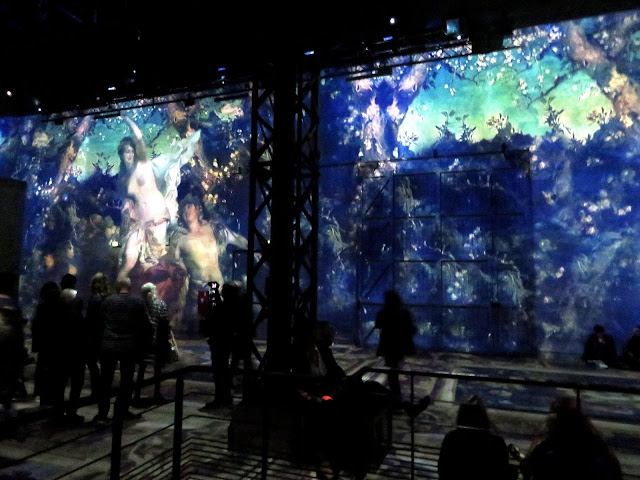 The three programs, which run back to back, include magnificent images from the artist Gustave Klimt, along with two others. The one I thought most fun featured the work of late artist Friedensreich Hundertwasser. 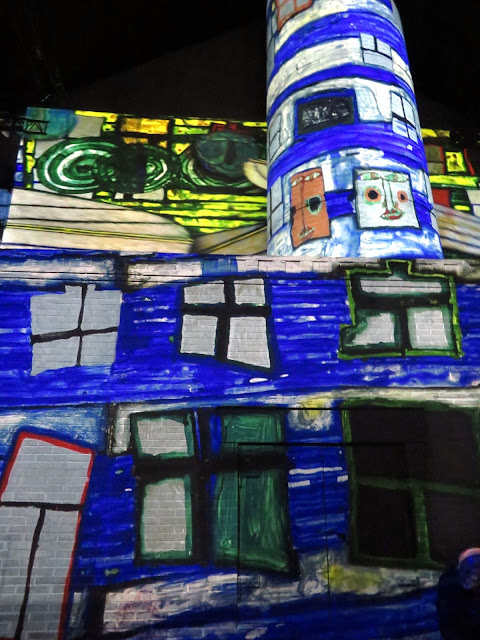 You watched magical looking cities appear before your very eyes with cars rolling through and rain falling. And yes, when the rain fell, the images on the floor were puddles! 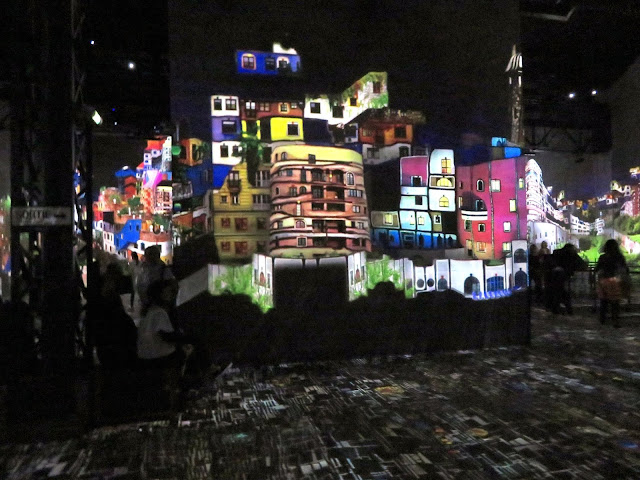 I really loved the color and whimsy of this one and the sound track was delightful, too. 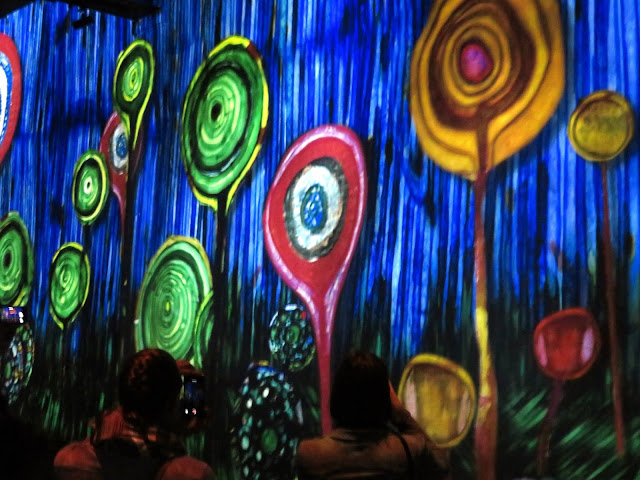 The other was titled AI. It was far more abstract. 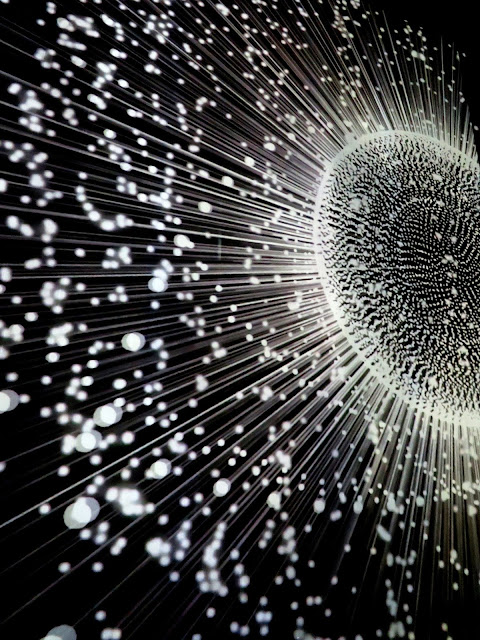 But it was equally interesting, almost like watching a planetarium show. 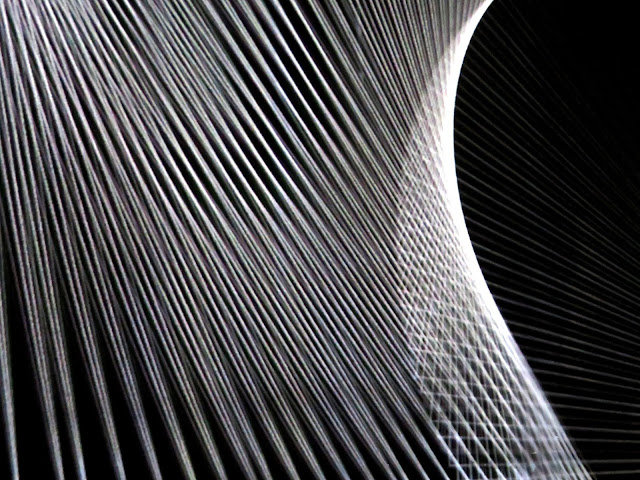 And then came Klimt. 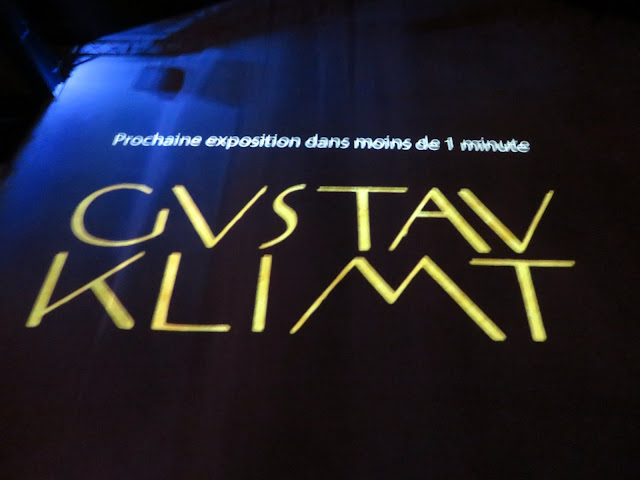 And it was magnificent. If I was impressed before, it paled by comparison. 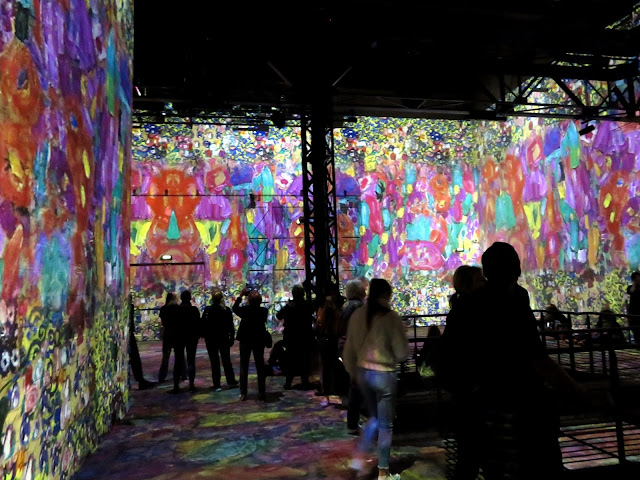 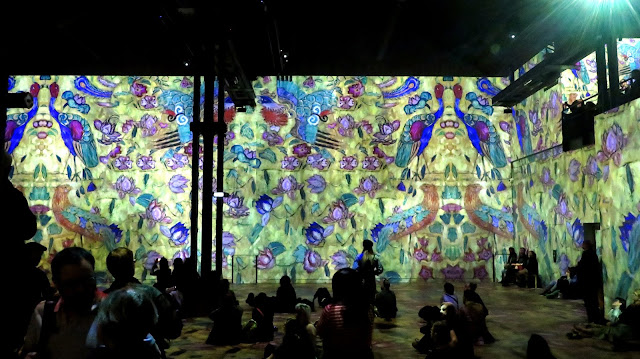 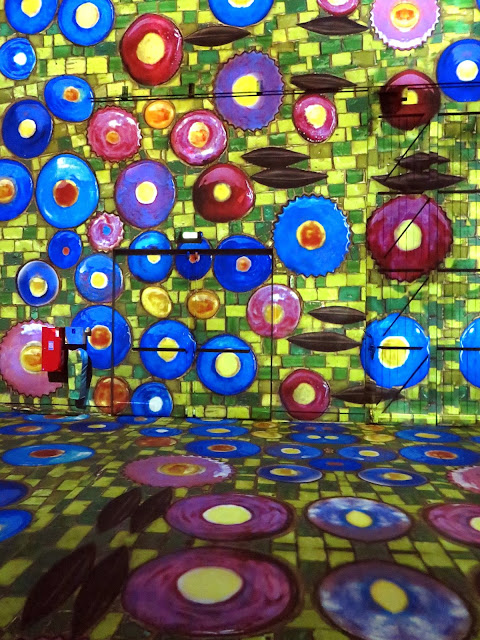 The images morph into one another with beautiful dissolves, leaving you to feel you are in the midst of a storm or in a deep forest. 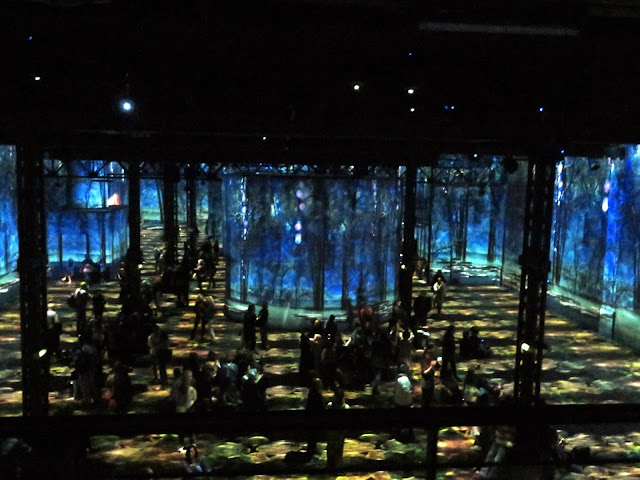 In some cases, they appear to be drawn as you watch, as with a magnificent tree or drawings of faces. Other images are the the famous paintings themselves -- or parts of them, mixed and added to with new elements revealed a bit at a time. 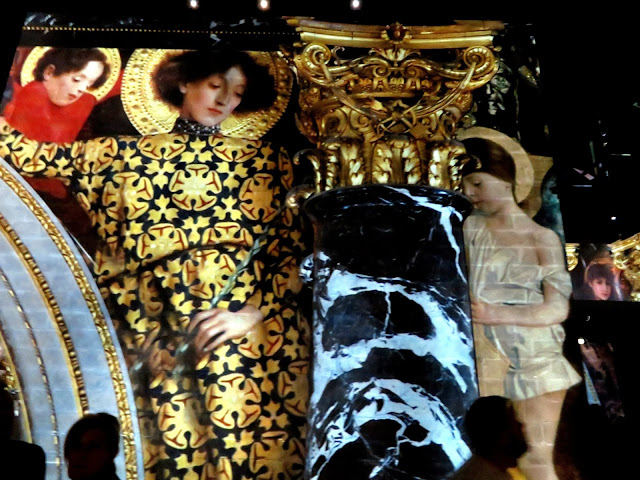 In other cases, vintage photographs are interspersed, setting the scene and period. 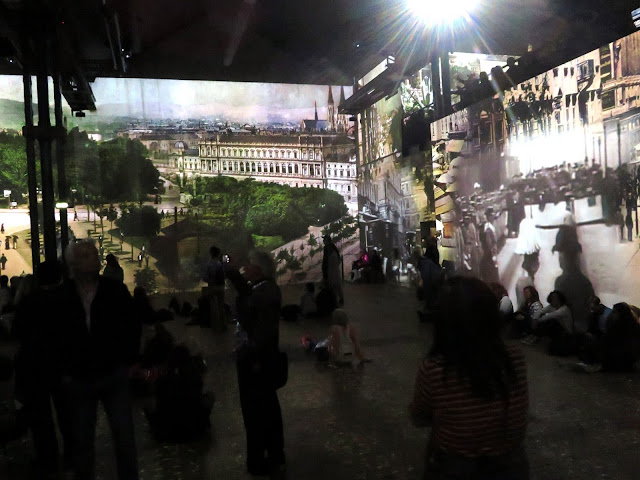 The experience included classical art and that taking you through Klimt's career. 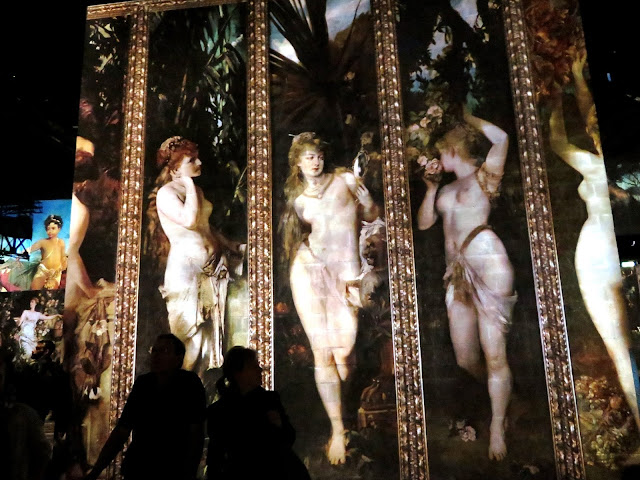 I was surprised to see this -- I was familiar with his Woman in Gold and The Kiss, but not a more pastoral style. 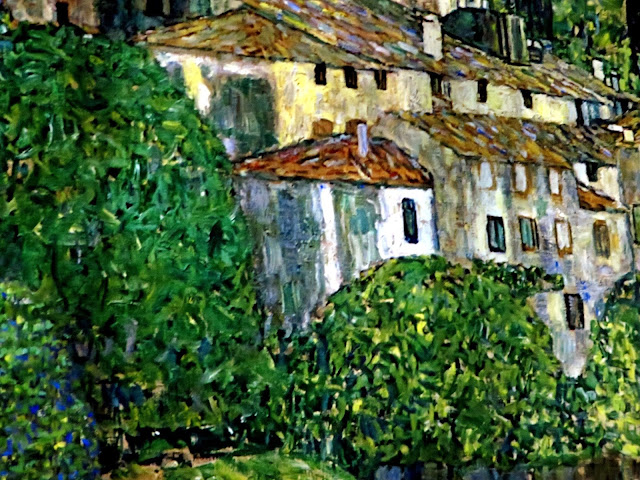 People walked about, sat on the floor or steps or simply stood there. 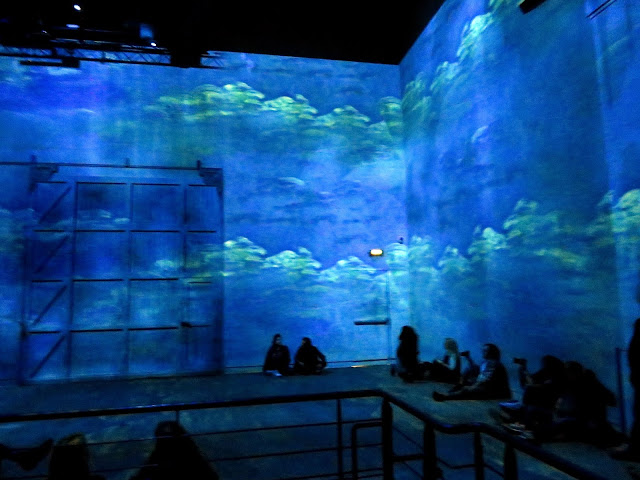 The colors would wash over their faces and bodies, making them part of the art as well. 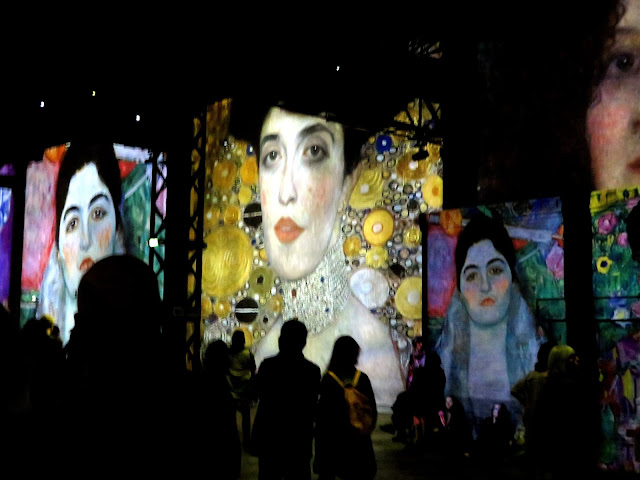 It was interactive without being active. You simply had to be, to look -- up, down, around, at the person next to you, at your own hands or clothing -- and you were part of the art. 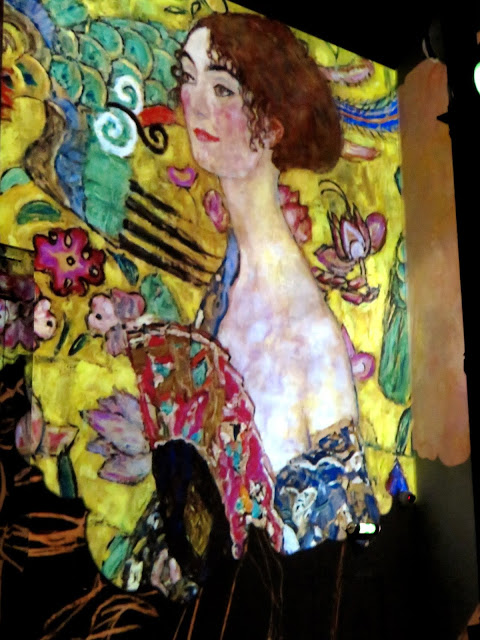 I think we both wish we could go back and see it again and again and revel in the beautiful images and music. 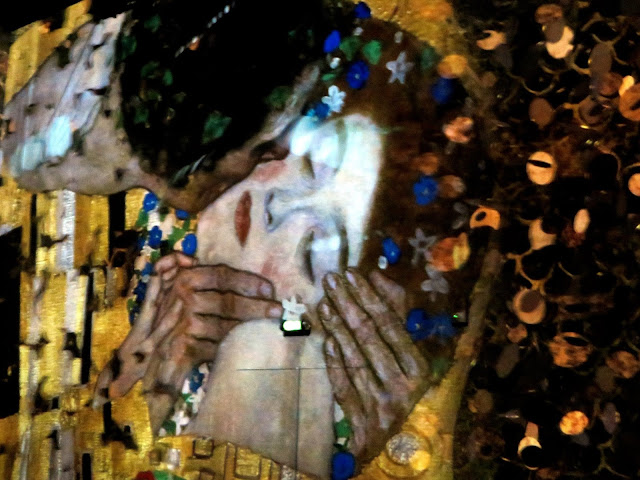 Below are two videos. This one is shorter and features Hundertwasser's piece. (The rain falling at the end was my favorite part!)


The one below is about four minutes and from the Klimt presentation. Sometimes it goes to black for a few seconds and this is for two reasons -- in some cases, that was just what was on the walls in my view for a few minutes at a time and second, I didn't want to turn too rapidly with that nausea-producing swish-pan video! You'd think that working for a television station for 32 years would give me better video skills, but it's not my wheelhouse. Still, you will get an idea of  how the displays morph into one another and can hear the dynamic the music that accompanies it.


Enjoy. (You'll find other videos on youtube if you search Atelier des Lumiere.)
Posted by Jeanie at 8:17 AM

Shared this, as I have with all your Paris posts. Keep em coming!!

Hello, what a wonderful exhibit. The various images are just stunning. The lighting and colors are beautiful. What a lovely show to see, I would be speechless too. Thanks for sharing your visit. Have a happy Friday and a great weekend.

How wonderful to see such an exhibit. Thank you for sharing that with us.

Wow! That is so cool!

Wow!!! Is this a temporary show?? Just dazzling, and i'm happy for you that you were able to fuflill your wish!

OMG - I would give up important body parts to see this! STUNNING. Thank you SO MUCH for the alert ... now I'm off to youtube up some more clips. I'm agog!

Wow. You just leave in awe here!
The rain with the puddles is my absolute favorite, that is pure genius!!
But it´s all amazing! AI is also great (though I always have the little boy in my mind now. Hm, or yummy Will Smith, I stick to that!).

There are no words, Jeanie. Lucky lucky you.
Amalia
xo

Only the French can create such a grand art display. Your win to be there at the right time.

That is quite amazing! You have so much knowledge, did you study art in university? Take courses? Watch a lot of PBS? -Jenn

I am in love with this show, wow, I would so love to see it
Thanks for sharing the wonderful photos. Hugs, Valerie

I am sure it was a grand experience for you.

Oh my goodness, how extravagant! This is so interesting. I can see why you would want to go back and see this. I think my favorite was the lady with the fan. She looks so lovely. Simply amazing, Jeanie.

Amazing! Beautiful! I can only guess at how wonderful it was to be immersed in it.

I saw it too!! It was simply indescribable. Stayed for two entire screenings so I could see it from many angles. So glad you got to it.

Breathtaking! If I could hop on the plane right now, I would be there. I saw some pictures on another blog, but with your videos it really makes it come alive. How I love this period of art and to be wrapped inside this cocoon of art I can't even imagine. Beautiful! Thank you so much for sharing this with us. I knew I would so waited until I had time to sit down and take it all in. Oh sigh!

Wow. This looks amazing, and big too. I'm glad it didn't disappoint! I think I would have really enjoyed this also. Thanks for sharing. It was amazing visit from my couch. Hugs-Erika

I was overwhelmed and I wasn't even there. This is an amazing exhibit, and simply out of this world.

I'd never heard of the Atelier des Lumiers and loved the exhibition. So happy you posted your videos it made it all so real.
Amazing Jeanie!!!

Thank you for your glorious photos!

A great post! <3
I am following you and invite you to me
https://milentry-blog.blogspot.com

This looks spectacular, your photos are awesome-I can only imagine what an experience it is. Thanks for the history lesson, too!

Jeanie, what an experience, amazing and spectacular! How wonderful and special that you were able to see such a fascinating exhibit and thank you for sharing. I enjoyed it immensely.

Oh WOW, such a cool place for an artist to visit. Loving the colors and the different styles of art. Thank you for sharing, beautiful.

Extraordinary images - I'd love to attend this show. They even have paintings from one of my favorite painters. Thanks for sharing.

How glorious.
Hope your Thanksgiving was as well.

I'm glad you weren't disappointed. Although, by the sound of it there's no possible way anyone could be disappointed with that... It sounds incredible.

WOW... Oh... my... goodness... You are right, Jeanie... not enough words. And I'm all teary, just looking at your images, so I can only just imagine what this must have been like for real, in person and the experiential experience of it all! You know how I LOVE Klimt... so I'm almost speechless at the idea of all this--music and art combined... BRILLIANT! I don't think we'll be able to get there to see this in time... but fun to dream! ;) THANK YOU, Jeanie ((BIG HUGS)) P.S. Hope you & yours had a lovely Thanksgiving weekend!

I barely can find words for all this beauty. I can just imagine, you being a artist, how much you enjoyed it all....

This is SO COOL. Thanks for sharing the vidoes - helps us understand what it was like to see it in person! What a cool experience to have! This is the kind of place I could go back to again and again!!

Jeanie, Thanks so much for sharing this post. I loved it!!! What a super innovative concept. The art is beautiful. The videos are great. Have a great week. Sylvia D.

This is absolutely amazing. I want to book a ticket to see it now! Found you at Keep In Touch party :)

Jeanie what I would have given to be a bird on your shoulder. It sounds quite amazing, all this light and imagery in front of you. I can only imagine how you must have felt, although you describe it very well. It must be a once in a lifetime memory!


Stunning. I would have loved to see that. Thanks for linking to Keep In Touch.

Oh mon Dieu... I CANNOT wait to see this! Thank you for these photos!
Xoxo

Wow, that was quite the exhibition!!

Wow! What an amazing exhibit! Thanks for sharing at Take Me Away this month!
Shelley

You just keep giving me so much more reasons to visit Paris again whenever I get the chance dearest Jeanie! I can spend a whole day in this exhibit and appreciate all the shows and lights and artforms that are present there, so beautiful!

Thank you so so much for sharing this to Timeless Thursdays dear Jeanie, and again, HAPPY BIRTHDAY <3