A few spots in Quebec City deserve special mention, among them, Place Royale, site of one of the first successful settlements in New France and considered the birthplace of Quebec City. 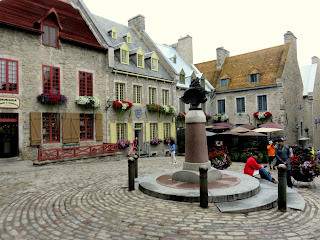 Samuel de Champlain first established his trading post on this site in 1608. (tinted stones mark the dimensions of the spot.) The site has been preserved just as it was during the 1700s, despite a ruinous fire in 1662 and attacks from the British, who captured the city in 1759.) 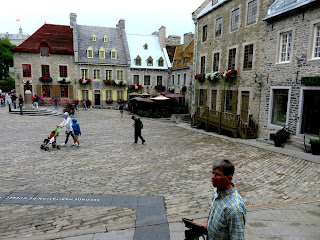 It is the site of Notre-Dame-des-Victoires (or Our Lady of Victories) church. The original church (destroyed in a fire during the siege of Quebec) was built on the foundations of Samuel de Champlain's trading post. It was so named in 1690, following a French victory over the English. In 1711, when yet another attempt by the Brits to take Quebec failed, the original word "Victory" in the name was changed to the present "Victories." 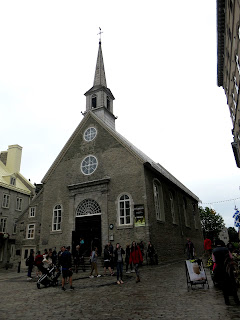 It is a lovely building, not at all flashy and well restored. (More about this church in THIS POST.) 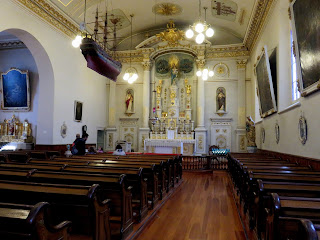 Keep walking and you'll come across a remarkable mural. In the past couple of decades, fresco paintings have been done in the city highlighting Quebec's urban heritage. The murals depict the city's history and are remarkable for their size and scale. 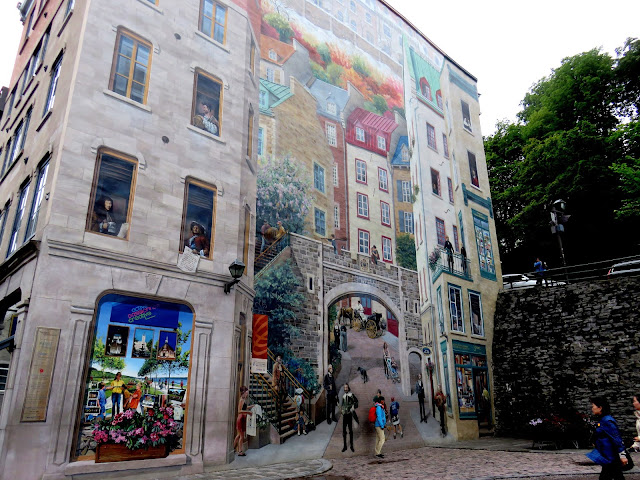 The first was finished in 1999 and is called La Fresque des Quebecois. Many of the city's historical figures are included such as Samuel de Champlain, Jacques Cartier, Lord Dufferin and more. 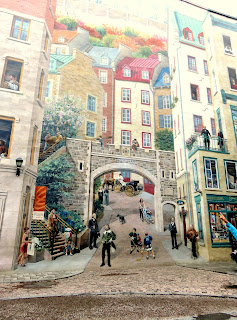 Done in the trompe l'oeil style, they feature architectural monuments and elements such as the city's coat of arms, cultural communities such as French and British settlers, the religious community, the people's love for hockey and the lovers who find Quebec City a romantic place. 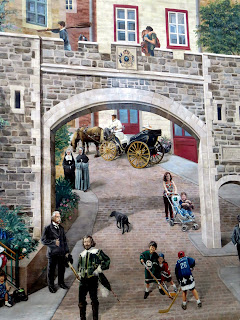 Have you heard the expression "a stiff drink" before? We happened to be near a tour guide pointing out some of the things on this mural and he pointed out the gentlemen below, taking a cask down the steps. He explained that in the days before embalming, those dying far away might be transported home, preserved in a cask of alcohol. Lord Nelson was presumably in this situation, following his death in the Battle of Trafalgar. Hence, the expression. (Snopes does back this up, by the way, with some exclusions!) 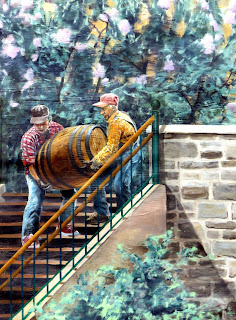 Shortly beyond this you can see excavations -- always looking into the past. 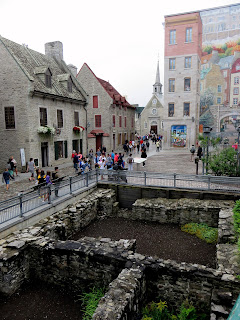 This mural (and the square) can also be viewed from above as one climbs toward Haute Ville. 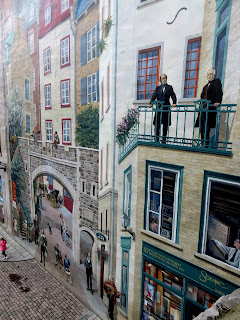 A view of the Square from above. 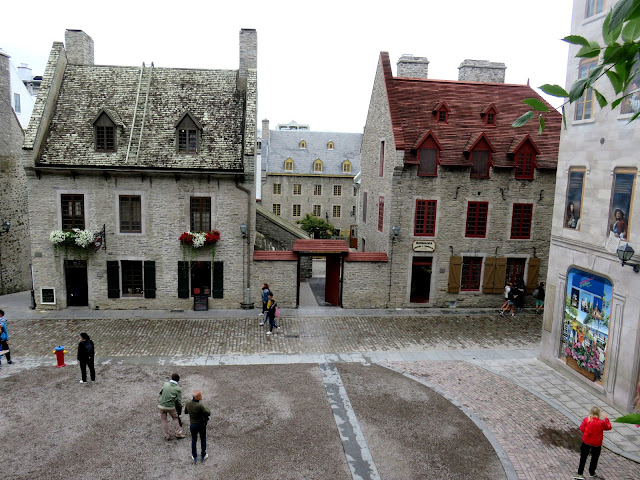 Oh Jeanie, When I saw the word Mural I could not click fast enough. Unbelievable work! I will be back again to gaze at the beauty. And the Church is breathtaking.. Thank you for taking me along with you to Quebec.
blessings my friend

I LOVE the town square and that mural is stunning.

Thank you for taking me along with you to Quebec.

What a fantastic place, love those murals. I like that there is old and new in them, very nicely thought out. Thanks for the little sightseeing tour! Hugs, Valerie

Oh wow!!---those murals! I've never seen anything like those! Amazingly detailed and gorgeous. Love the pictures. Had you been there before or was this your first time to see these?

Hello Jeanie, I’ve just shared your blog with my husband. He is a mad keen photographer and would love the chance to visit Quebec City, especially now he’s seen the murals. I would like to see it too so we’ve added it to our bucket list. It won’t be next year as we are off to Australia to see our family but maybe the year after that. I so enjoy your blog thank you for sharing the photographs. I have missed a couple of your posts, so I’m going back to read them now.

This was a gorgeous discovery Jeanie. How cool. I don't remember this area so I think we never got there. Wow, I wish we had. Thanks for sharing. Its really like going back in time. Hugs-Erika

Fantastic pictures, Jeanie! How long were you in Quebec altogether? -Jenn

Hi Sweetie Pooh! Oh, how beautiful these murals are. We are taking a train trip this fall to Canada and I think it's Montreal. Ha, Mr. Precious makes the plans and I just blindly go along! :) Thanks for popping in to see me little houses.
Be a sweetie,
Shelia ;)

Oh my, Jeanie! We missed these when we were in Quebec! So wonderful, and I really got lost in that first one - having a hard time discerning the real from the painted. Just fabulous!

It's always nice when you can learn something while admiring something interesting/beautiful at the same time. As I said in a previous post of yours about the area, I can understand your reluctance to leave when the time came to do so.

Great murals! I love seeing art on buildings; it increases the delight of being places. Sometime, you will have tocheck out the building murals in St Pete FL.

Hello, the mural is just amazing and beautiful. Lovely tour of the church and town. Thanks for sharing your visit. Have a happy day!

Those murals are amazing!
Looks like you had a wonderful time there.

Goodness gracious . . .
Seeing the murals alone would make my trip . . .
Interesting Artistic Creative. . .
Thank you for these views Jeanie . . .

OMGosh, those murals are amazing.

What a fabulous find, Jeanie. I am always amazed when people find or seek out murals and public art on buildings. I have a friend who features one each week (although right now she's on holiday). Both of these paintings are fabulous and you have to admit, they help eliminate graffiti.

The murals are awesome. Thanks so much for the photos. Hope all is well with you :)

Wow, those murals are truly works of art! At first glance, I actually thought there was an arched tunnel through that building - it looked so real! The three dimensionality is just amazing! Love hearing the story behind "stiff drink"!

Jeanie, wow oh wow! These murals are fabulous! I am amazed at this stunning artistry...thanks for sharing this beauty!!

Those murals are just amazing. What a great way to share the rich local history.

Wow, Jeanie, I had no idea these murals existed. Now I really *must* visit Quebec one day! You are a wonderful tour guide.

Yes, I have falling into cat love. She stole my heart when she picked me. Loving the painted buildings. So cool. Looks like you are having an awesome time.

Thank you for taking me along with you to Quebec.

Noooooo, Nelson says 'England expects every man to do his duty' and then is transported home in a barrel of rum or whatever - well I never, you learn something every day :)
What an amazing mural I love the perspective on the road!
Wren x

How BEAUTIFUL and sooo charming!! Such magnificent murals... I don't think I've ever seen ones quite like those--WOW! What a wonderful way to keep the history alive and well. :) Loving these Quebec tours, Jeanie! ((HUGS))

My goodness, the murals are beautiful! What a wonderful way to decorate the side of a building. I wonder if they have the difficulties with vandalism that we have here?

Jeanie I had a good laugh with that stiff drink. The mural is really beautiful and I guess you really need to be there to appreciate all of those small details that make it so fascinating.

Thanks again and always for sharing your photographs with us. I had no idea there were so many incredible murals in Quebec.

In Reykjavik, a much younger city, there are murals everywhere. They are called "wall poetry," and seem to save public walls from graffiti tags. (Most taggers, not all, wouldn't dream of tagging another artist's work.)

What amazing murals! Wow! Now I want to go and see them in person.

WOW! Those murals are stunning. And to think this is just up north of me!

I've always loved murals and even graffiti, if it exudes goodness. These murals are interesting, and I especially like the last one. There are a few murals downtown in the next town over that always get my attention. It's the town I grew up at, and can you believe one of the murals in red roses? I'm glad you got to see so many murals on your trip to Quebec, Jeanie.

I loved the story of the "stiff drink." Now, I have to go figure out a bit more about our sayings that include "stiffing" someone (as in not leaving a tip) and calling someone a "real stiff." I suspect there are connections.

I'm often of a divided mind about murals in historic spots. There's no question these are beautifully done, and that I wouldn't miss them if I were in the area. Still, it seems just a teensy shame that we feel as though we need to decorate such areas to make them worth visiting. But you know me -- always the one with the weird thoughts.

This really has been a fabulous trip you've taken us on. I've gone back and re-read the previous posts, and enjoyed them much more than on first reading. I think my vision was blurred a bit by events here -- it's been hard to focus on all the fun and beautiful things "out there." But things are improving, and my best friend, who broke her hip in the process of coming back home to her flooded house after evacuating, gets out of the hospital this week -- and has a place to go. Hooray!

This city truly is an amazing place. The murals are beautiful, colorful, and so interesting. I can just imagine how intriguing they must be in person.