Art in the Garden -- Making Money and Friends for Your Organization

Art in the Garden. It has such a nice ring to it. Unfortunately, it was not my garden! 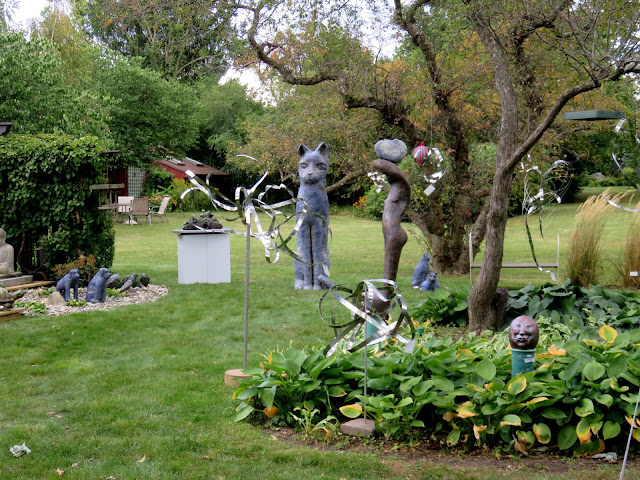 Our Friends of Theatre group recently hosted a small fund-friendraiser in the garden of one of our supporters. It's a great idea for an organization if the demographics work for it so I thought I'd share a bit. 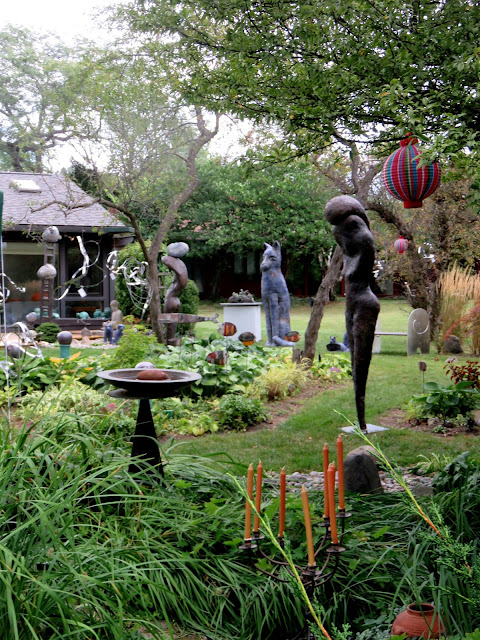 First, you need a home with a lovely garden and Elinor's was. Plus, it was large enough and with enough room so you could display the art well and still have room for people to mingle. In our case, I think it was a little over 100 people who attended. 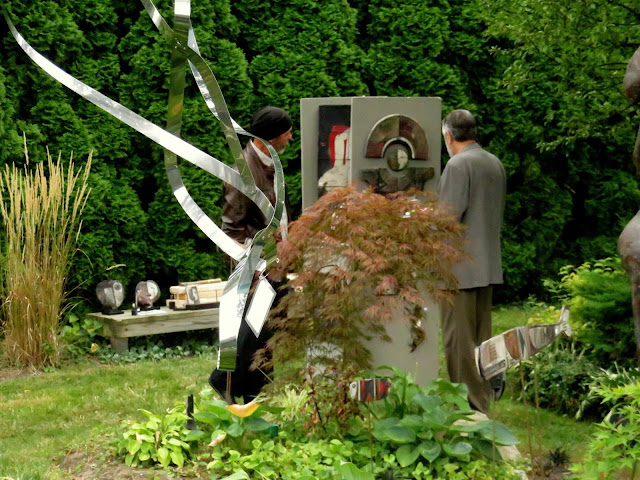 Then you determine the art you want and the artists. Our group had four potter/sculptors with different styles. 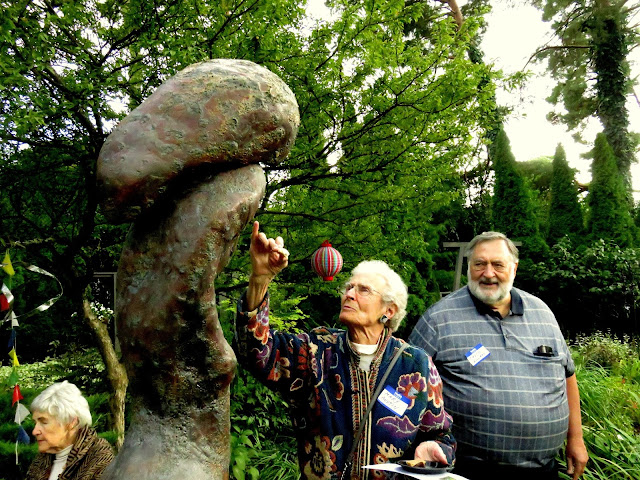 All have their own following locally, so guests included their fans as well as our theatre fans who wanted to support our efforts. 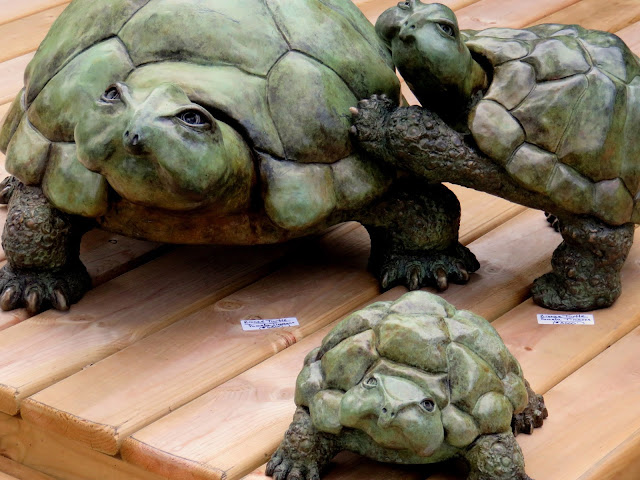 Our artists were asked to donate 15 percent of any sales they made to the group. (One artist said that wasn't enough!) So those dollars were added to the proceeds. 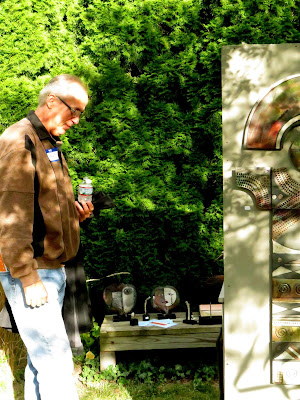 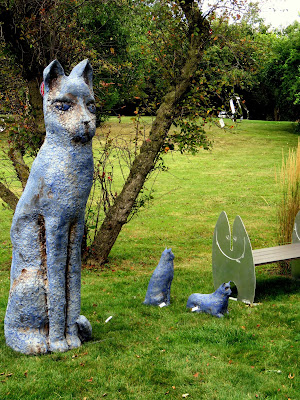 We decided that this was as much a friend-raiser as a fundraiser so we kept our admission low -- $25 in advance and $30 at the door. We had close to 100 advance sales plus guests at the door, so it seemed to be a good price point. 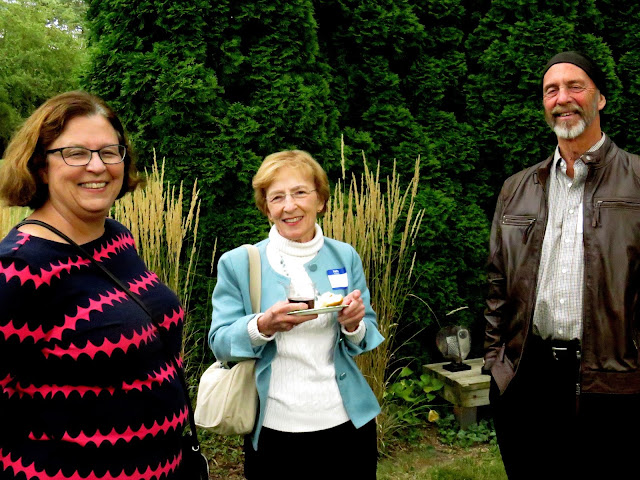 Almost all of our promotion (except printing and mailing) was free -- community online calendars, social media, press release, postcards to our mailing list as well as the artists, and our newsletter. In fact, postage/printing was our greatest expense. Additional cards were distributed in galleries and other public pick-up racks. 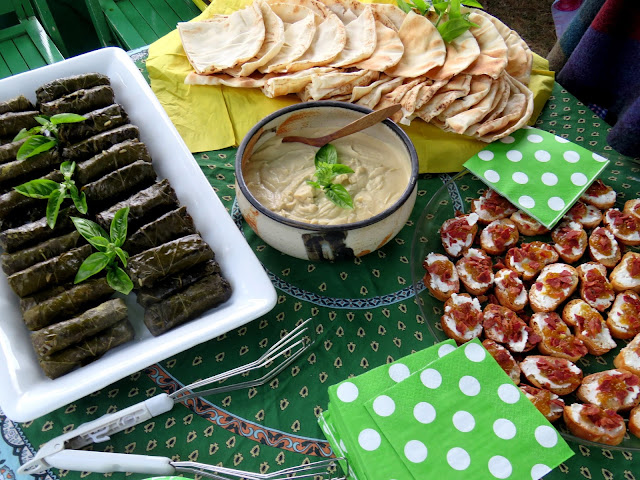 In terms of expenses, we obtained a gift card from one of the area stores (Meijer, for midwest readers) for $150. With that we bought party sandwiches  and veggies. A Middle Eastern restaurant partially donated and also gave us a half-off deal for hummus and grape leaves, while a bakery gave us half off macarons. Some of the costs of the half-offs were picked up by board members. 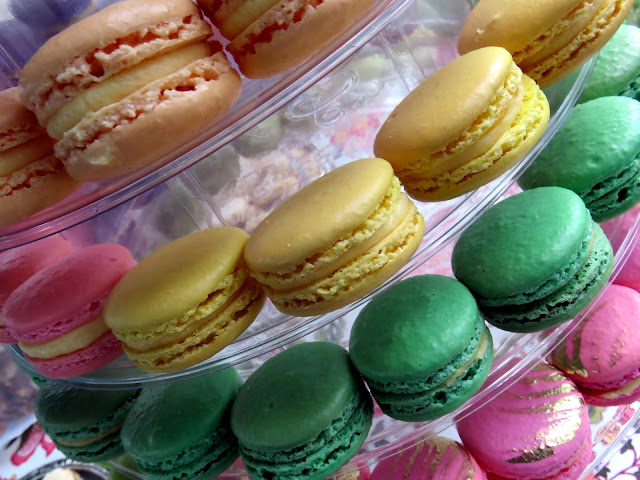 Other board members volunteered cookies and desserts, fruit, meat-and-cheese board, beverages and wine. No one left hungry and there were even leftovers, but not so many that it felt we over-bought. (Leftovers were given to theatre students who had been in rehearsal for upcoming shows! They're always grateful!) 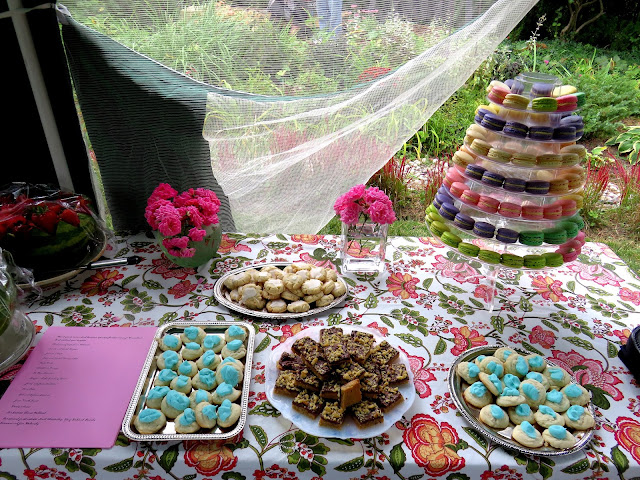 We were worried about the weather although we could have brought things up to the terrace is there was light rain. A downpour would have been a problem. We did get a tent for the food and wine. 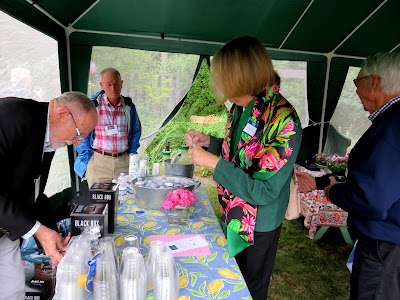 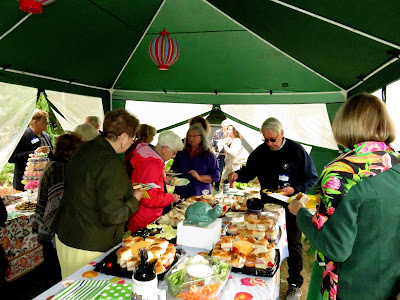 Set up was easy. We had volunteers at registration, at the food and bar and as "security" (basically minglers who worked the crowd but also kept an eye out.) We all helped set up and clean up which took a very short time. Artists were responsible for their own set-up and take down. 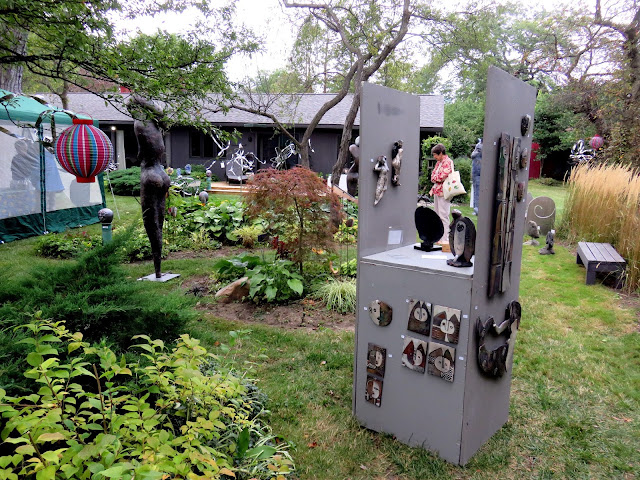 The best part was seeing so many happy people. Our weather ended up being great and people loved strolling the garden and looking at the art. 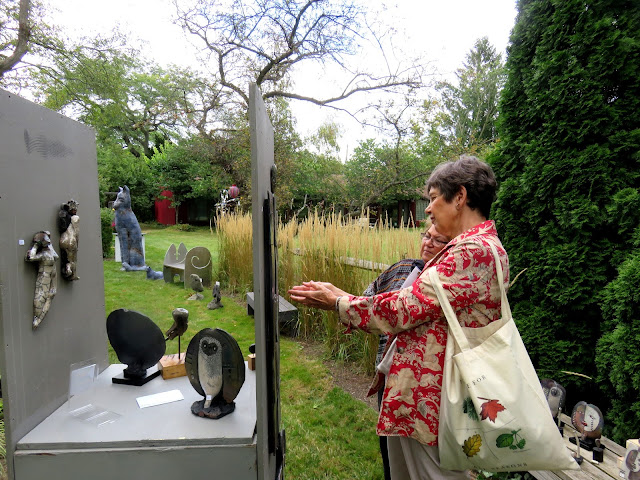 We were able to share information about our upcoming season and the artists were able to sell some of their work and gain exposure to new potential fans. 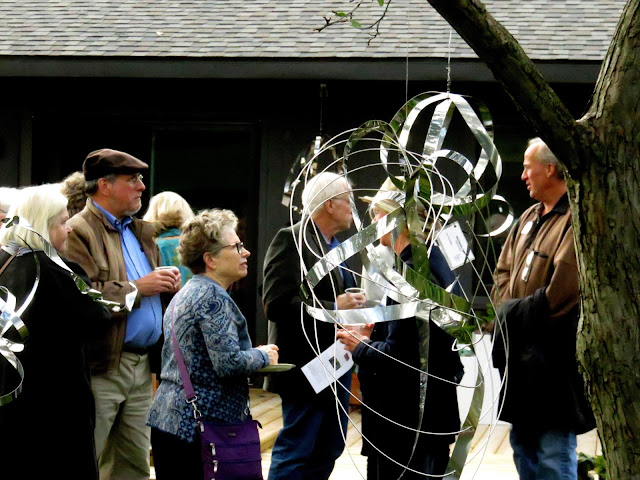 All in all, a greatly successful event that exceeded our expectations in terms of both attendance and cost. After expenses and with the artists donation, we made about $3,000 -- and a lot of friends. 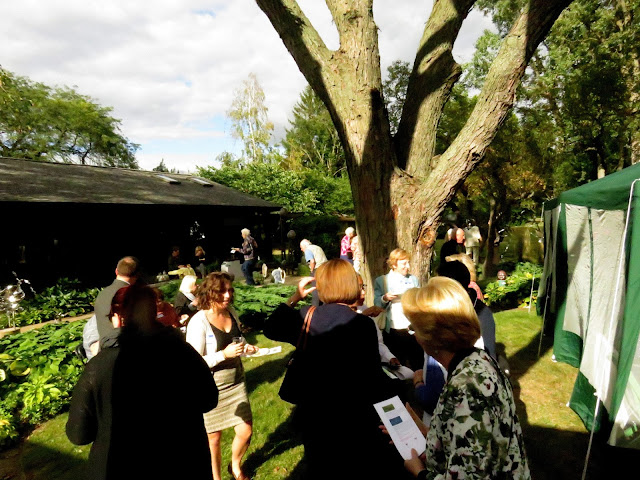 Great idea, Jeanie, and fun too. I can think of a few gardens where this would work. It is a winner for everyone.

what a wonderful concept!

Oh wow....everything looks so nice. What a totally great idea. I love all that cool art in the garden.

What a fun and lovely idea for a fundraiser! I would have LOVED to attend a fundraiser like this....in a garden! Happy the weather held out for y'all! :D

Thank you, Jeanie. It was a wonderful event and you covered it well!
Jacqie

This sounds like a fun and profitable event, always good to combine FUNd raising with making friends and having a good time. Hugs, Valerie

Looks like the fund raiser was a great success. I would have enjoyed it.
The food looks fabulous. You get to attend some great events.

Great idea Jeanie . . .
A beautiful garden for sculpture and pottery is the very best . . .
Happy your Fund-Friend Raiser turned out smashingly!

Looks like a fabulous time was had. Great food, a beautiful garden, fun art, and a good cause.

A garden is such a perfect place to cultivate friendships! This summer we added an engraved rock with one of Ruben's quotes on it. Next year, we'll do one with one of mine. It really adds, this ART!

Jeanie, what a wonderful event! Of course, the art I would have been particularly interested in was the big cat, but everything looks good - what a talented group of artists!

So many delightful art items for the garden. Love those turtles. The macarons look soooooo good. Wow, I love that tier they are served on, that's unique. What a nice fundraiser, Jeanie.

Wow, what a great event! My husband would love to attend and have one of these. We run a small community theatre in our town and are always looking for fun ways to raise funds.

Hi Jeanie,
What a wonderful place to have a fund raiser, and I just love the Artist's work! The turtles are my favorite.
blessings,
Penny

How I love this idea, Art in the Garden. I could do that in my garden and donate it to something. Now my thinking cap is on for next year. I have one artists that has talked to me about having a show in the garden house, but it could be throughout the garden. Thinking. This Art in the Garden looks wonderful. I absolutely love those turtles.

That's a very smart idea. Wow. I can't image having a garden big enough for all the art plus all those people. I think there is some amazing art there. Plus it looks like so much fun. Happy weekend. hugs-Erika

Great idea! I'm glad it was so successful!

Wow! Everything looks amazing. I love the turtle sculpture, and I wish I was there to taste those macarons! Looks like a great fundraiser.

Congratulations to you and your fellow workers and artist for such a successful FUNdraiser event. I was in awe of some of the art, too. Even the food looked spectacular.

What a cool event!! I would have loved to attended! It was set up very well and looks like lots of interesting items to enjoy! and the FOOD TABLES looked fantastic!!

What a great idea... and what a great garden!! Friend-raiser and fund raiser...love that! Great eclectic mix of art...and food too...Such wonderful food! And you made money...soooo good!! This inspires me to do better, more interesting with my garden, and do extra creative and charitable with it too... Ideas brewing! So glad you shared this, Jeanie! And so glad your group got some much-needed funds! Happy Weekend ((HUGS))

How wonderful, Jeanie. I'm glad your event was a success - on many fronts, it seems. It's so hard to promote and sustain the arts in the community. I know.

What a fun and fabulous event Jeanie, it is so wonderful that people donate even more than asked and local businesses step up and contribute! It looks like you had a beautiful day and a wonderful time!
Jenna

What a fabulous fundraiser!! Love seeing all the art! Great talent!! And the food... need I say more?? Have a wonderful weekend, sweet Jeanie!

Such a great fundraiser Jeanie. Looks like a great garden for the art. We are always at the mercy of Mother Nature when we plan any outside events, luck was on your side for a beautiful day. Happy weekend my friend.........

What a beautiful night
full of so many delightful
things to see and enjoy!
You are a wonderful
addition to such a group,
I'm sure : ) Wonder if
you purchased any of
the art?

What a cool event! I am glad that the weather worked out. The food spread looks great - especially the beautiful macarons! You know I am a sucker for them! ;)

This was a great idea, Jeanie. I would love to attend a fundraiser like that, and those macaroons look delicious.

Great fund raiser. Everything looked great and so many wonderful items. The food looked good also. I would have loved to attend this - glad that everything worked out for the group. Thanks for sharing.

Have a wonderful weekend.

neat! I'm lucky to have a yearly exhibit in my city, called Art in the Park. always nice things to discover

Great idea, and great execution! Thank you for sharing it with us. :-)

Jeanie, what a fabulous fund raiser! It looks like so much fun and the art is so interesting! Thanks for sharing this great idea to raise money!

What a wonderful idea and event, Jeanie! I would love to visit such kind of an art exhibition. It's wonderful that so much money was raised and everyone enjoyed the day.
xo Julia

This looks great - If I had been closer it would have been my cup of tea (with a macaroon please) for sure. I don't think you can beat the mix of art in a beautiful garden setting. I'm a lover of sculpture and I imagine the artists enjoyed mingling with the guests too, Winner all round for sure!
Wren x

I see I'm not the first Barbara to comment on this post (waving to the other Barbara) :-)
This looks like such a fun event, I'm glad it went so well.

The turtles are wonderful. If I could have been there to buy a turtle and eat macarons, I would have been happy. I finally found some macarons here, but I think they were lower-quality; they were a little gummy. They might have been old, of course. In our humidity, it's hard to keep anything like a meringue decent, and I'm sure macarons are the same.

Have a Daily Cup of Mrs. Olson said...

Sounds like a very interesting and successful event! I'm glad that it was such a great success! Thanks for sharing with SYC.
hugs,
Jann

That is fabulous. What a great idea. Those macaroons look delicious.