I'm not sure what happened with our last Cork Poppers gig -- usually we are so organized. Wine from France or Northern Italy or a specific type. This year we'd planned to go with Aussie-New Zealand wines. But then Chile and Argentina were added to the mix, so we enjoyed the wines of the Southern Hemisphere! 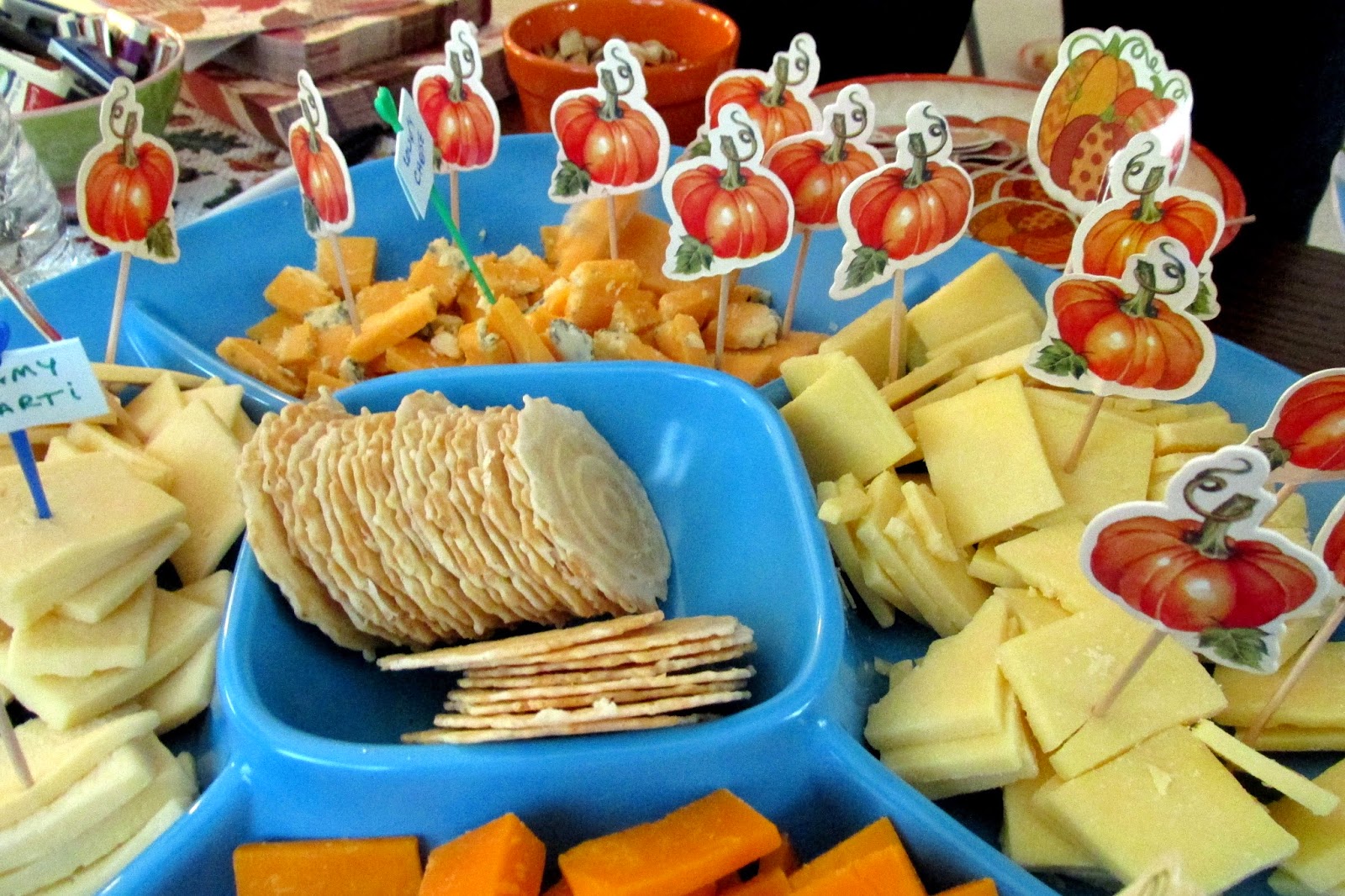 Of course, my first stop is always the cheese tray. The array of cheeses, combined with Rick's baguette's (barely out of the oven!) is always the best way to start the day!

As always, everyone brought a favorite to present. And as always, most were red! But we started with the white that Dick and Cheryl brought and for me (and I think many of us) it was a taste revelation! 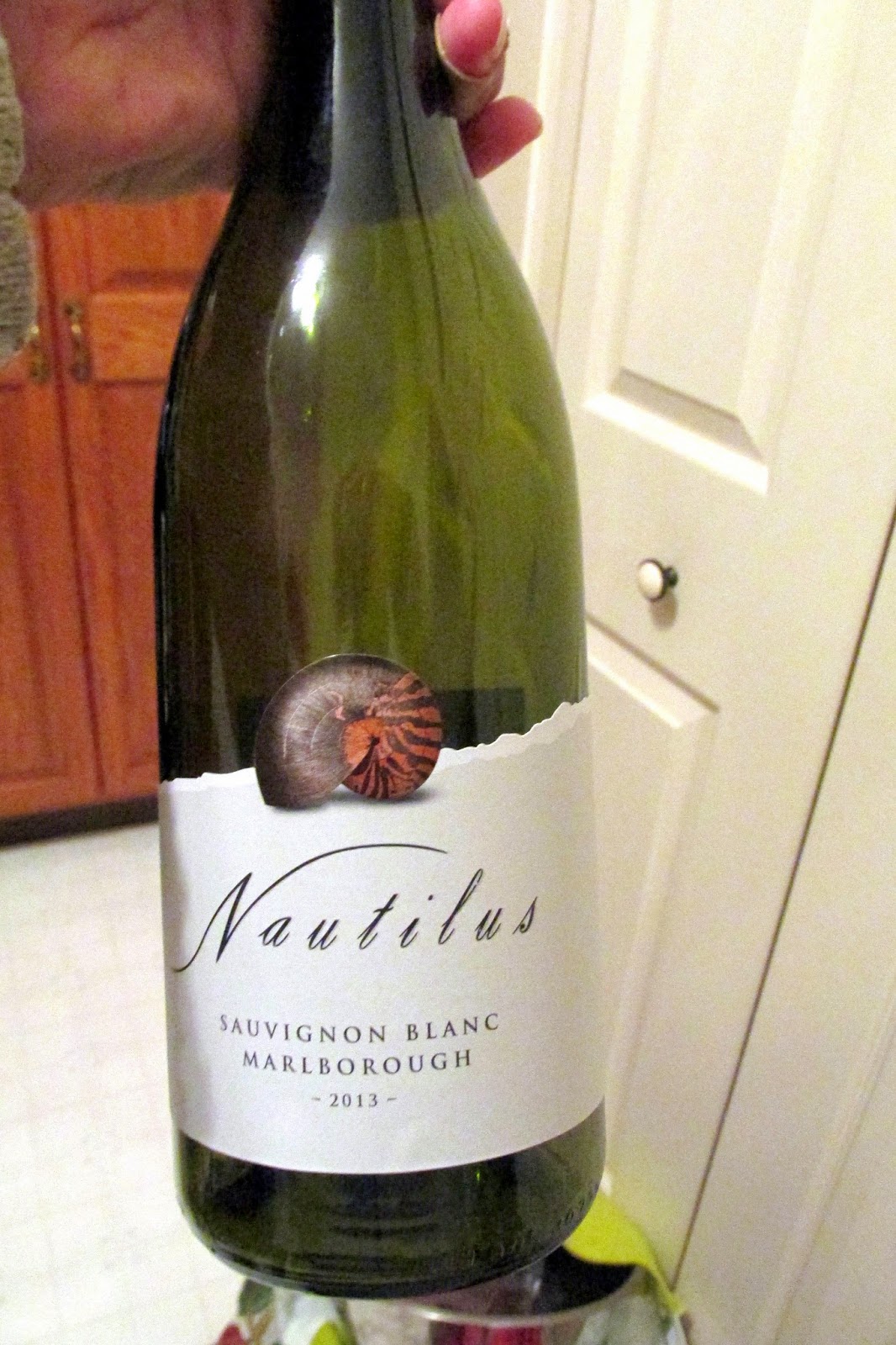 It was Nautilus 2013 Sauvignon Blanc from Marlborough, new Zealand.If you want to talk about a fabulous aroma, this is it! "I could wear this as perfume," I said, while others called it "Yummy," "Clean and fresh" and lots of "I love it!" Cheryl found it to have a wonderful finish.Dick's notes mentioned a review where it stated that "This is a wine that holds little back and grabs a hold -- kind of like the naughty girl in high school you know you shouldn't like but you couldn't stop thinking about her."

The only downside is that at $17, it probably isn't going to be your everyday bottle of wine. (It has a relatively short cellaring potential, too -- if you are lucky enough to find a bottle of the 2013, note that it should be enjoyed before mid-2015.) 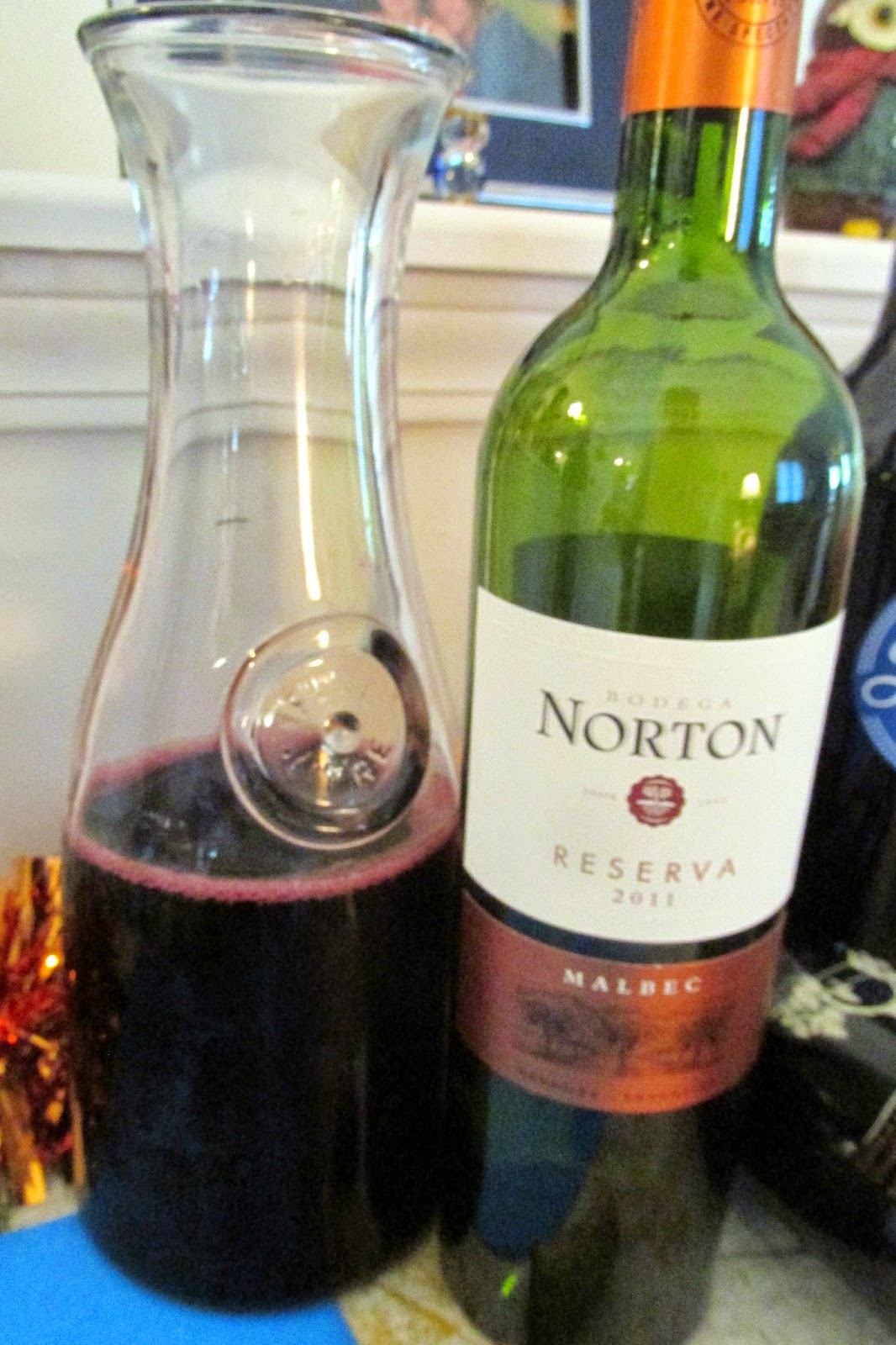 The Bodega Norton Reserva Malbec 2011 brought by Barb and Mike was a 100 percent Malbec from Mendoza at the base of the Andes. This, too, was popular. with our red-loving Poppers who agreed it would be delicious any time! Aged for 12 months in old barrels, it smelled delicious and at $14 was reasonably priced.

Rick and I brought a Malbec, too -- Ruta 22 Malbec, 2012, from Patagonia, Argentina. When I picked this up, the wine guy I spoke with was very enthused about Patagonia, both as a travel destination and as a wine region. Our tasters agreed on the wine -- "Smooth, like a baby's butt," one noted. 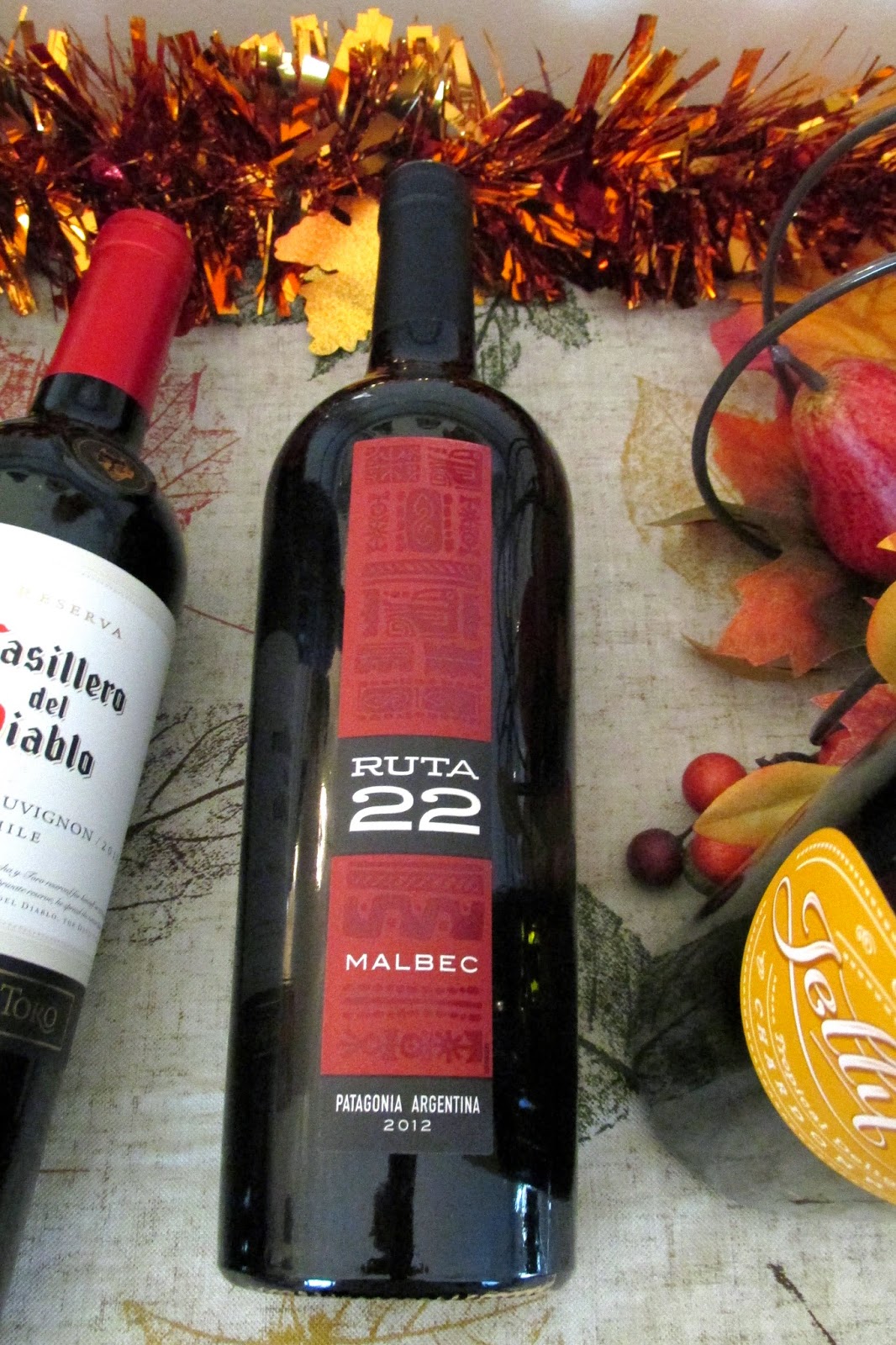 Here's a detail I learned about Malbec. It was originally a French grape, always used as a blend in Bordeaux wines. When immigrants brought it to Argentina, the adopted it and found that in the fertile Mendoza region it thrived and became the signature grape of the region. The climate of Patagonia is very dry and has great climate swings, so grapes grown there must be sturdy and consequently produce very concentrated juice. The 2012 was considered a terrific vintage year (cellar through mid-2015 or possibly beyond.) It was $10.49.

My notes get a little sloppy here (we did this the first week in November and only the three above had typed up notes.) Clayton and Anne offered Root:1, a 2012 Cabernet Sauvignon from the Colchaugua Valley in Chile. We all agreed that it was very tasty and one commenter noted, "I'd buy that again. 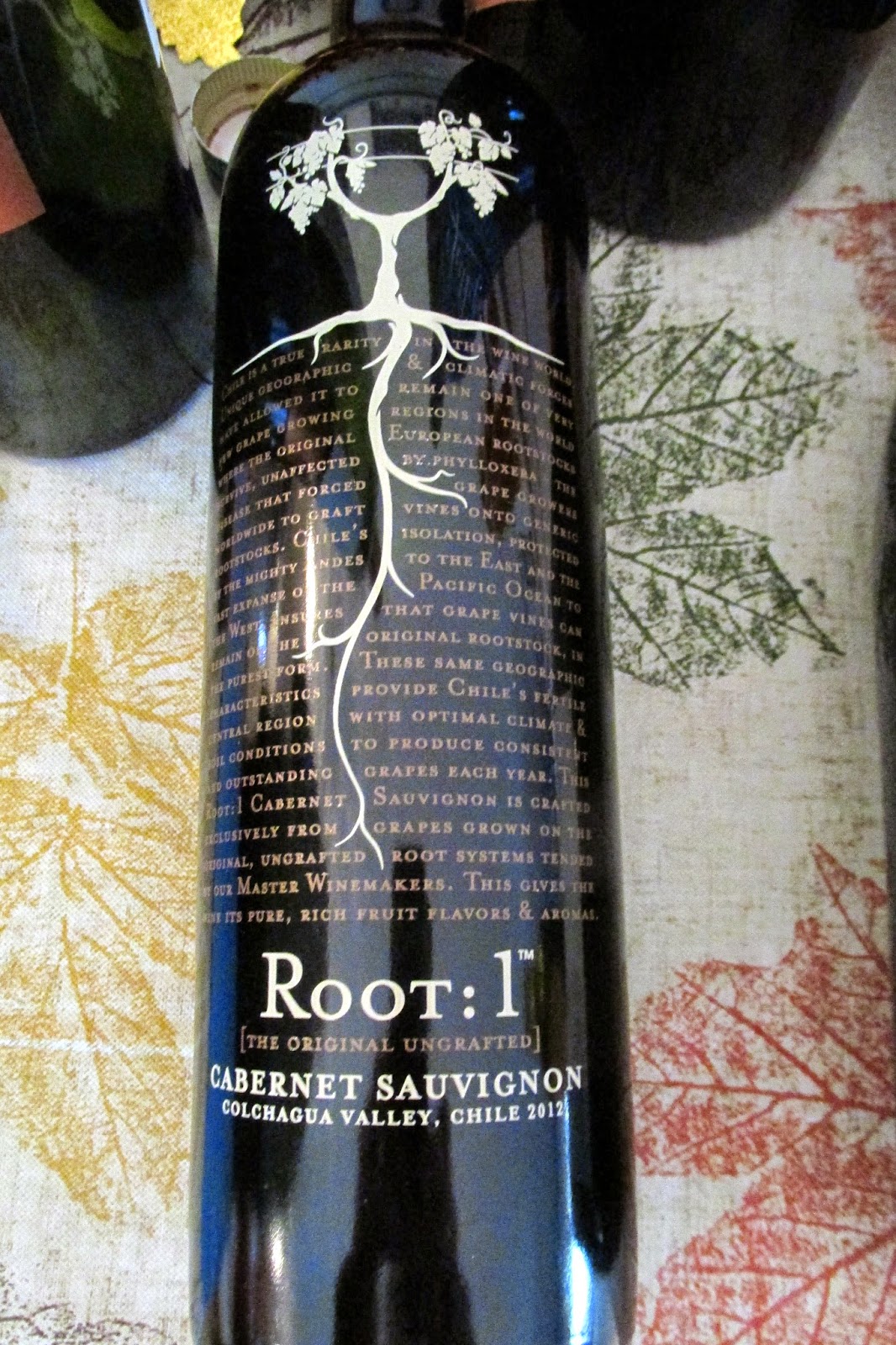 The retail on this wine is $16 but they bought it on sale for $12 -- and that's a point worth noting. Most stores have regular wine sales and it's an especially good time to buy a wine that might cost a little more than you would usually buy -- and maybe more than one bottle. 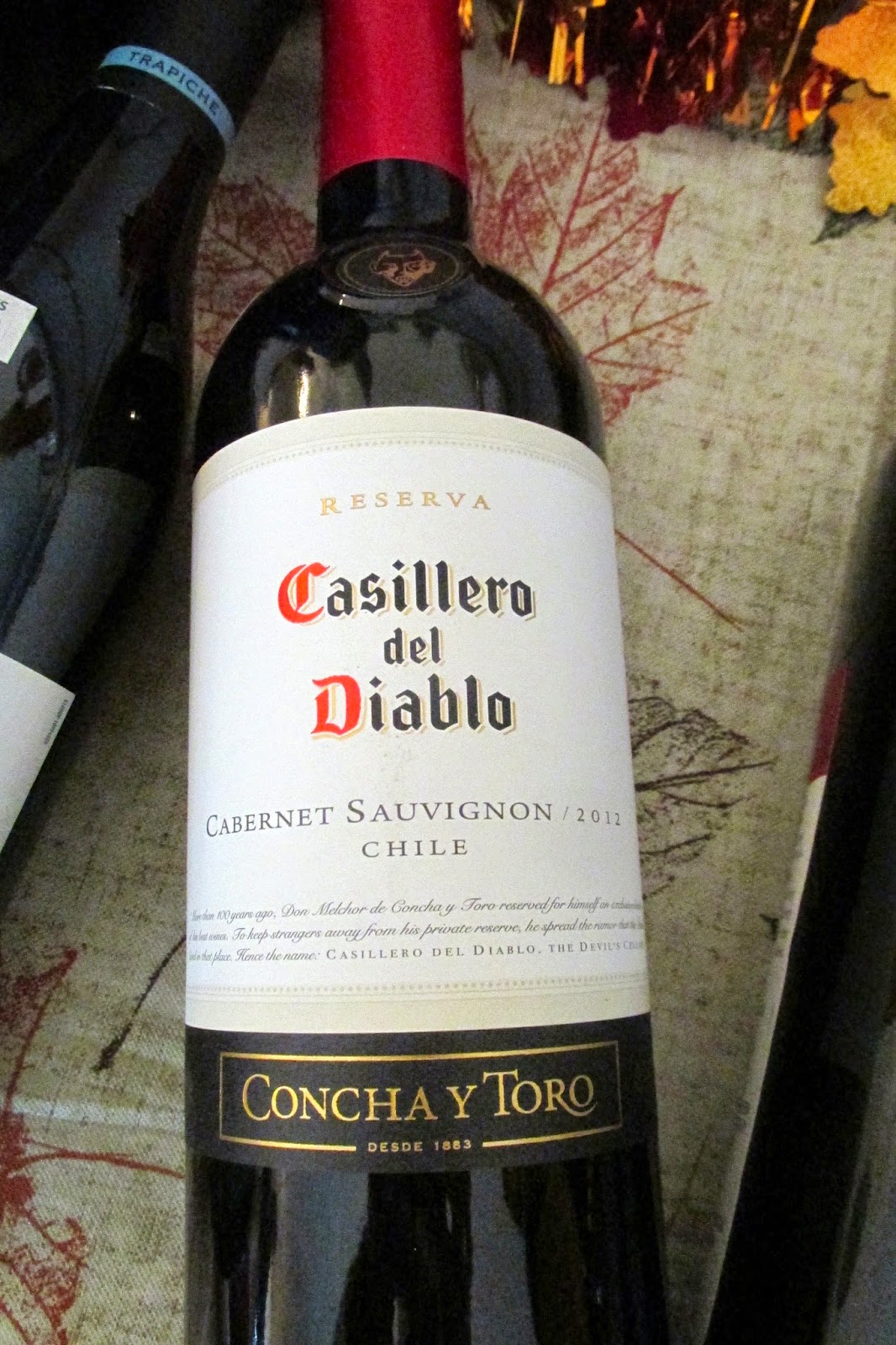 Next was a Castillero del Diablo 2012 Cabernet Sauvignon from Chile, offered by Pat. It had wonderful cherry and red-fruit overtones. (Or is it undertones?). It would be excellent with red meat, chocolate or a hearty stew. Retail: $11.99 (purchased for (9.99 on sale). 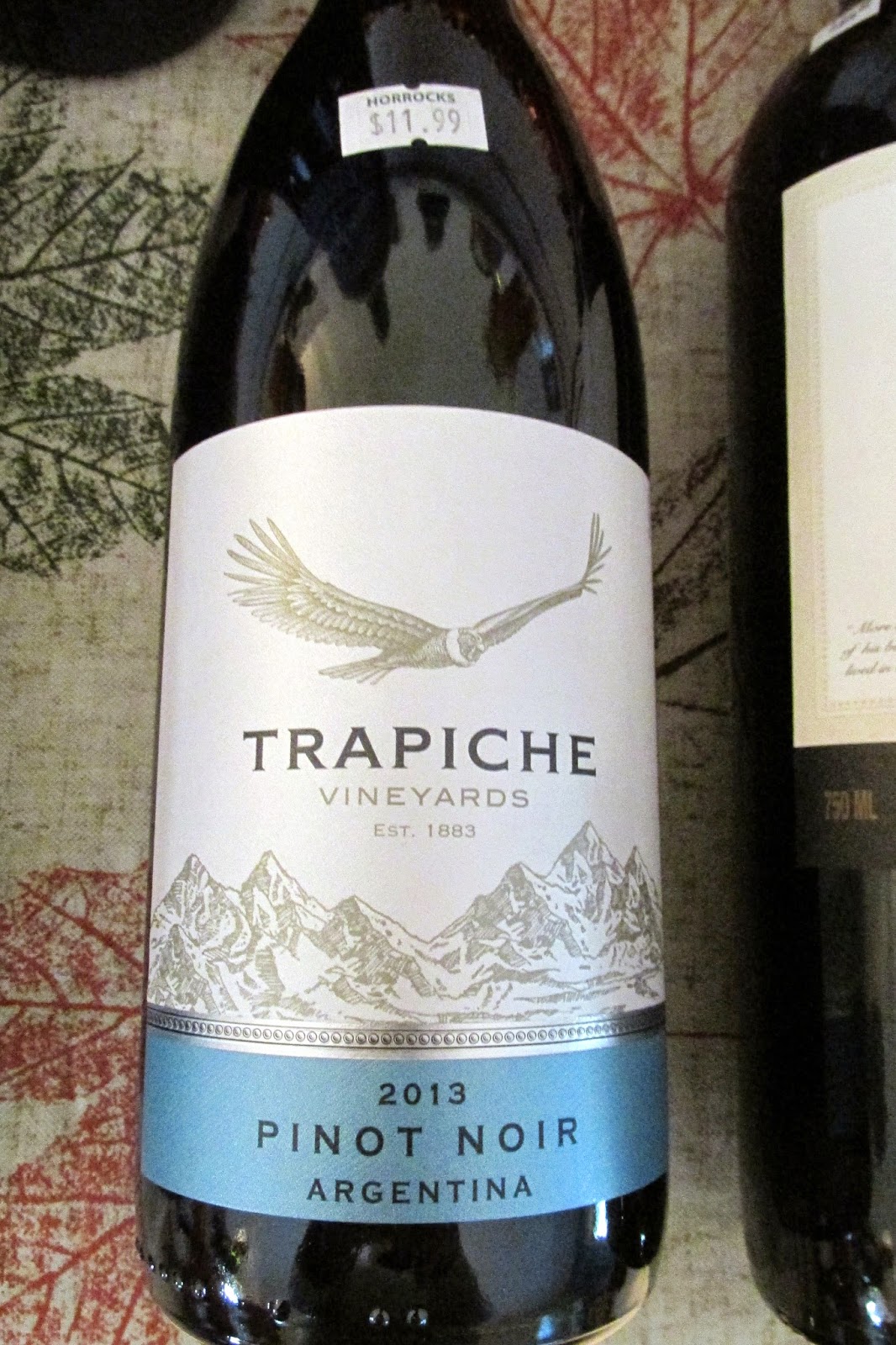 Pat also brought a Trapiche Pinot Noir 2013 from Argentina. I'm not big on Pinots but thought this was quite nice. It comes from the fifth largest distributor of wine in the world. Again, a sale wine -- again, $9.99 for an $11.99 retail.

With a November 1 date, the decorations were still decidedly fall -- like Pat's "Phantom of the Opera" pumpkin! She also had some trick-or-treating games. 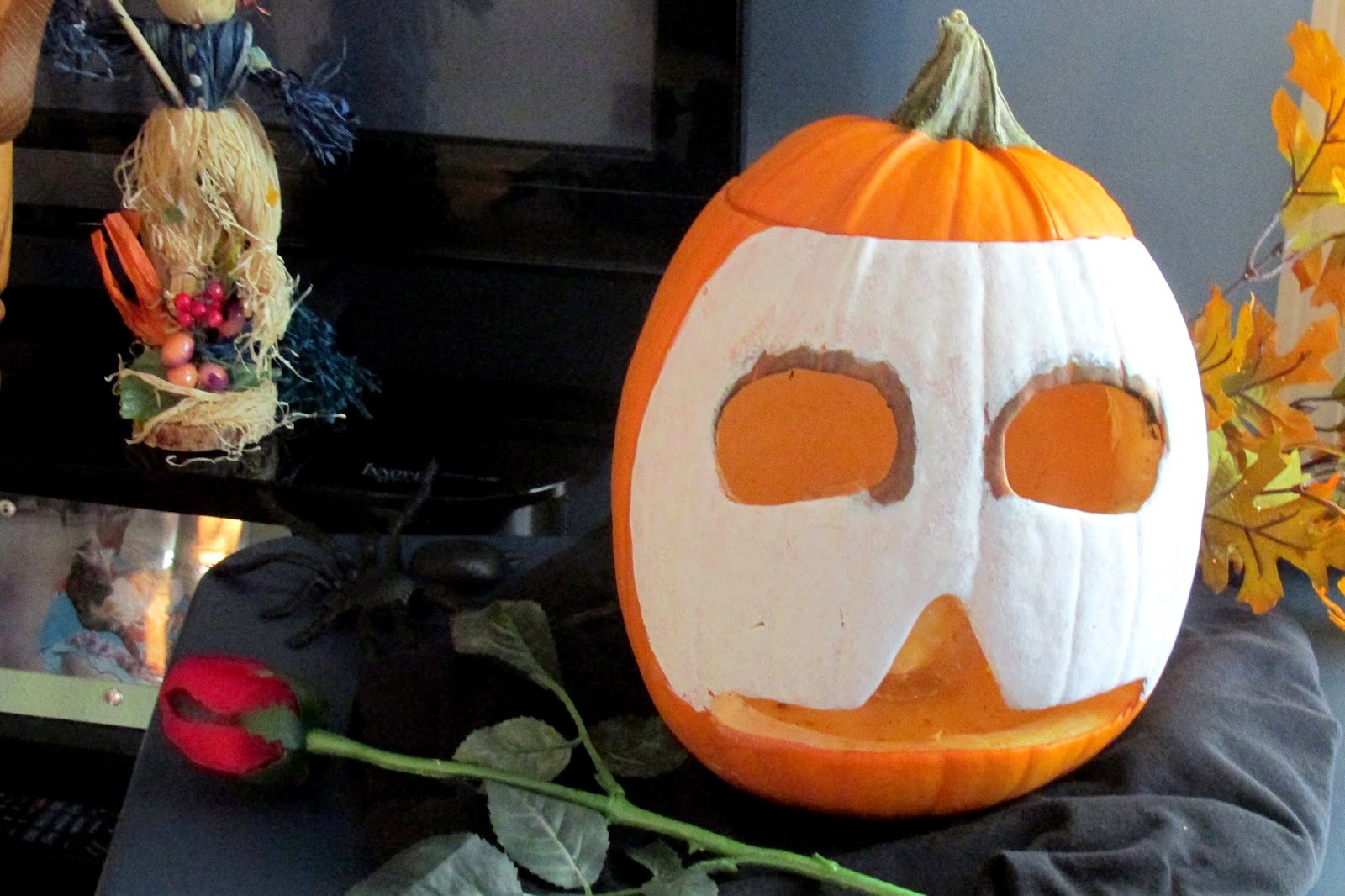 And then there was dinner! I think the Cork Poppers like the dinner as much (or maybe even more) than the wine! A beautiful table setting is a wonderful way to start a feast! 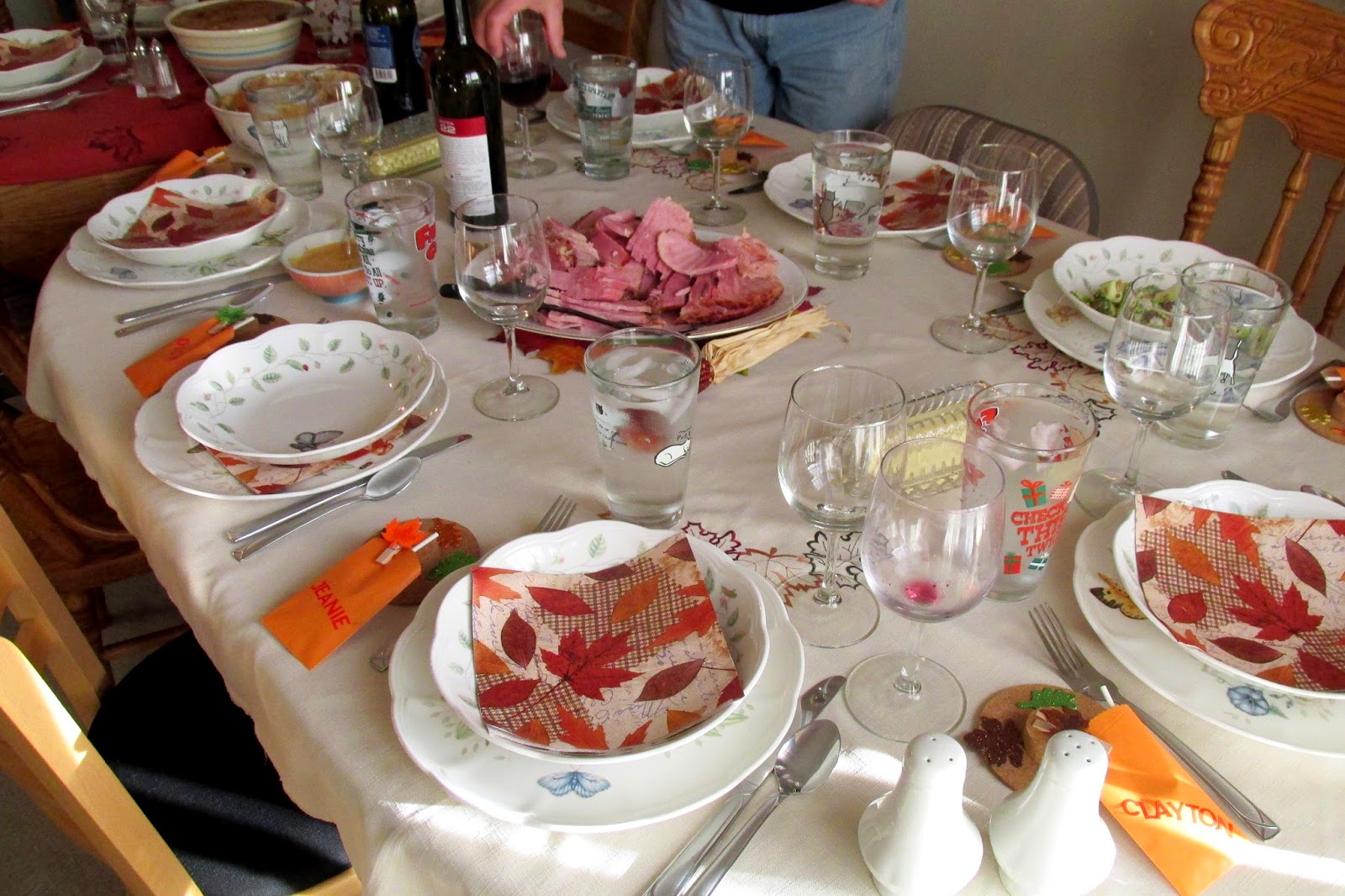 And  then there is the food itself -- ham, scallopped potatoes, a delicious salad and carrot cupcakes. 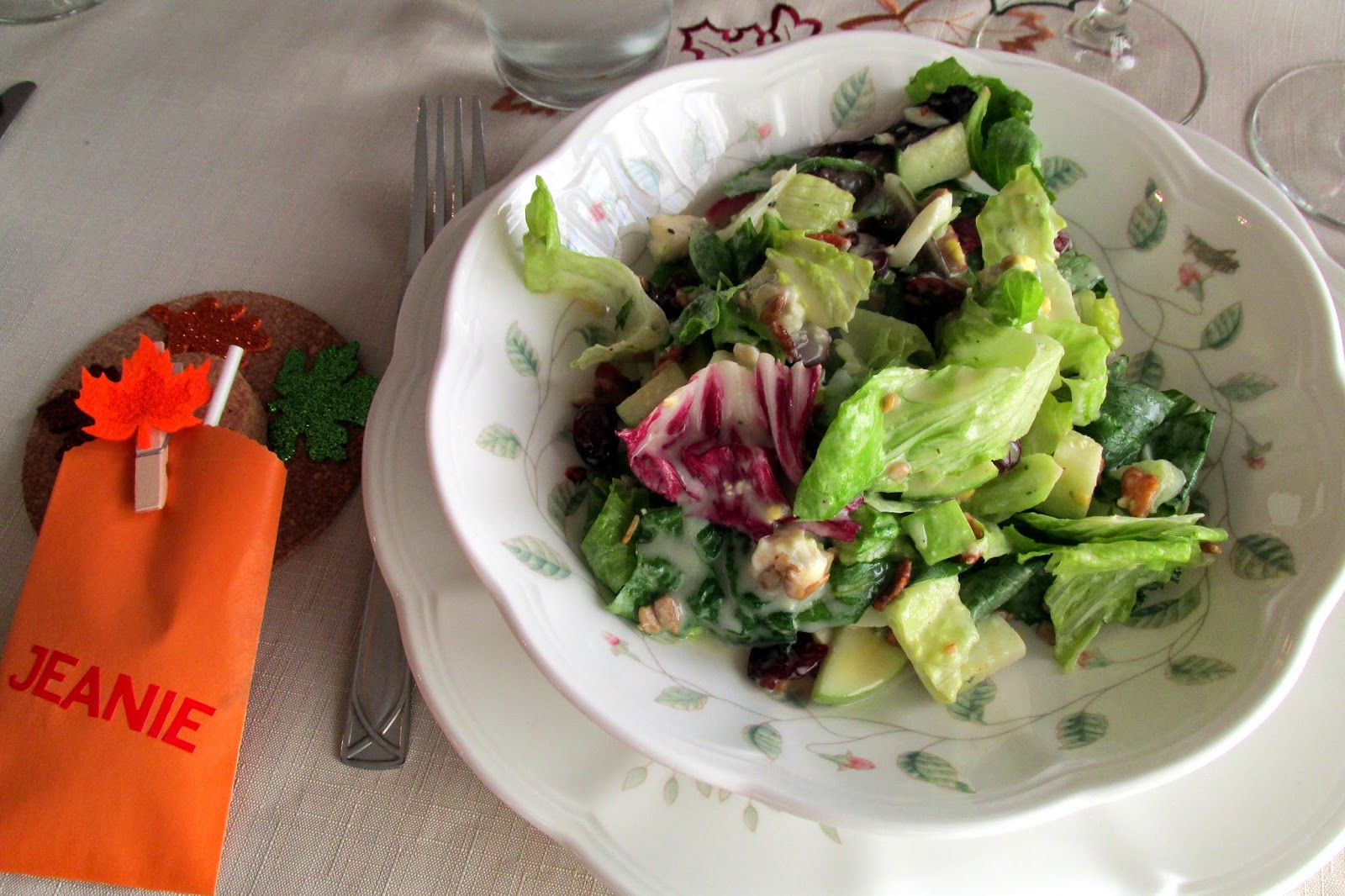 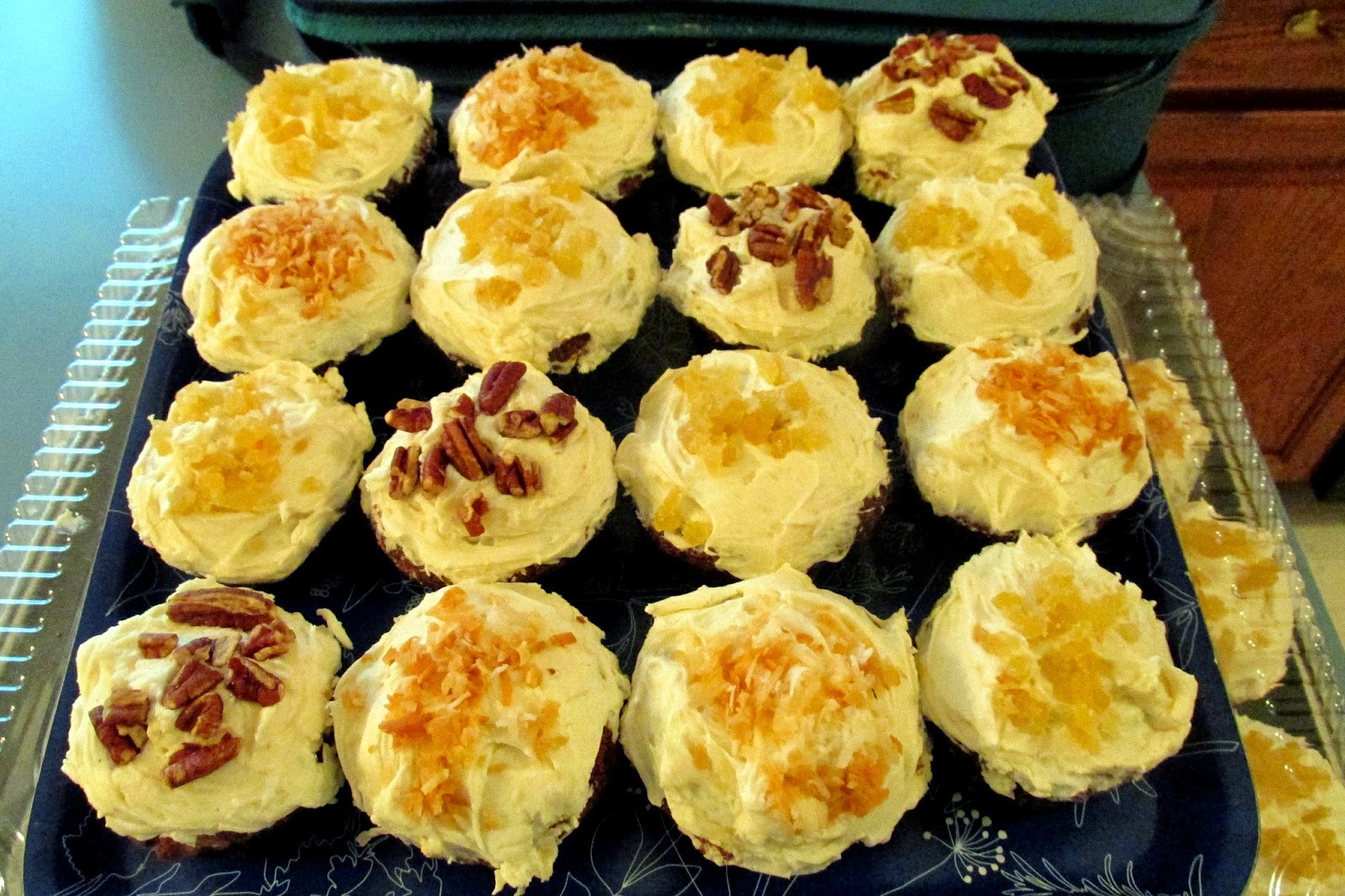 Yes, we were happy! 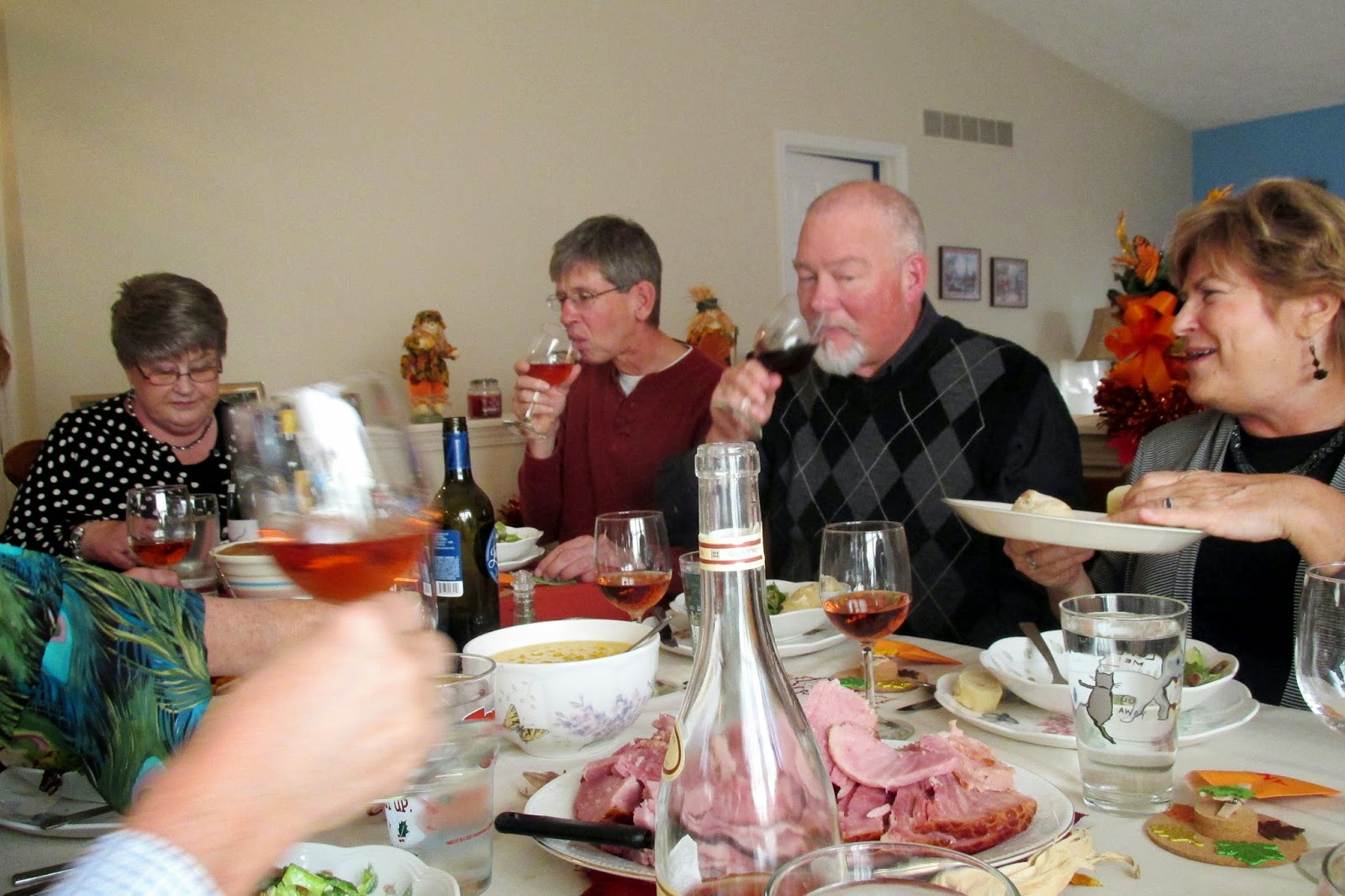 Our next Cork Poppers is at the end of January and I won't wait so long to write the notes! Look for more on both red and white Bordeaux wines soon!
Posted by Jeanie at 11:26 AM

Oh fun! I love your one friend's comparison of the wine to the naughty girl in high school - that is too funny! The food looks amazing as always - especially the cheese tray which I am always a sucker for!!

Great fun. Enjoyed the history note on Malbec as well.

How absolutely fun my friend. Have you ever tasted the chocolate wine from The Netherlands? Quite good! CHEERS! Anita

Hi, Jeanie--Happy New Year! Oh, what fun! I just LOVE your Poppers posts! And we love us an Aussie or Chilean wine! There are so many nice wines coming from Marlborough in Aussie-land. We've had the pleasure of the Chilean Casillo del Diablo Cab. Sav. before--it is sooo good to have around in the wine rack for most things. We went Italian at Christmastime with a wonderful Valpolicella Ripasso had with Duck on the Day, and then a sparkly Prosecco for New Year. So good...the holidays were good! Very much enjoyed catching up on your posts... I'm sorry to be so slow. Too much fun & feasting... LOL! Oh, and you'll never guess... I'm reviving the blog. Yes, and I was away sooo long... LOL! A woman's prerogative, and more...What can I say? ;o) Happy Days ((LOVE & HUGS))

As always, it looks like fun and that a good time was had by all.

This looks like such a fun book. I don't think I've tried a Malbec that I don't like, but my go-to wine is Montepulciano d'Abruzzo from Trader Joe's, about $6.99 per bottle.
Happy New Year!

Every time I read your Cork Poppers posts I am excited for new adventures. Not just in learning about wines, but your posts open the globe to your readers, as well. My favorite white to date is Winter White from Leelanau. Not far from home...but lovely. :)

The reference to winter white brings back so many memories. I have a pair of brand new winter white slacks I intend to get into, as soon as my old new year's resolution starts showing some results.

Up there on the cheese tray -- are those pizelle in the middle? I'd not had them until a year ago or so. They're wonderful. I found a source for lemon, vanilla and plain. They make a nice substitute for a cookie. :)

Oh I would have been quite happy there too! Even that salad looks delicious! Yummy to all!

People who love wine must surely be the merriest people:)
I love your group and your passion and all the beauty you bubble and pour:)
THANK you for being just
exactly you:)
-Jennifer

Jeanie,
I always look forward to your wine-tasting posts. "Community is happiness" and that's what your wine-tasting photos tell me. It looks like good friends enjoying each other. I always love seeing the preparations your hosts have made for you: table settings, food, wines. You can tell that care as been taken, but it looks relaxed and low-key. Just the kind of entertaining I like.

That cheese tray is up my ally. I do love cheese. We tried the Root:1 wine a while ago and like it. Maybe it was when we were on vacation. Can't remember.

How exciting to see one of our labels on your Cork Poppers review Jeanie!
I can't drink Sav but it was nice to read the good comments.
I'm a Chardonnay/Pinot Gris girl in the whites and Pinot Noir in the reds.
Our Otago PN's are especially good - sadly they are expensive too - mainly from small boutique vineyards.
Happy New Year and I hope you're both in fine fettle!
Hugs
Shane

This looks like so much fun! I've never tried malbec, but I'm going to pick up a couple next time I go to Trader Joe's. I could have happily done without the main meal and just sat by the cheese and bread board. That's my kind of eating! Well, that salad looks pretty yummy, too. :)

you sure know how to celebrate!

You and your fun band of cork poppers always make me hungry and thirsty dear Jeanie!
Lovely!
oxo

Dear Jeanie,
What a wonderful celebration! Everyone looks so happy. Thank you so much for sharing.
It was so sweet of you to come by. Your very kind words are so appreciated... Time... Yes, lost track actually, countless hours and days for this set.. But enjoyed every moment..
blessings,
Penny

I think this group knows and enjoys their wine. I see several my husband would love to sample and indulge in too. Lovely table setting and the food looks delicious. Sounds like a fun evening Jeanie.

Very fun! I think I've tried that Castillero del Diablo and enjoyed it. This is a great idea. I had to laugh when you said your notes got sloppy, thinking it was for reasons of inebriation. :)