A New Angel and a Remembrance

There's a new angel today -- and how I wish there wasn't. 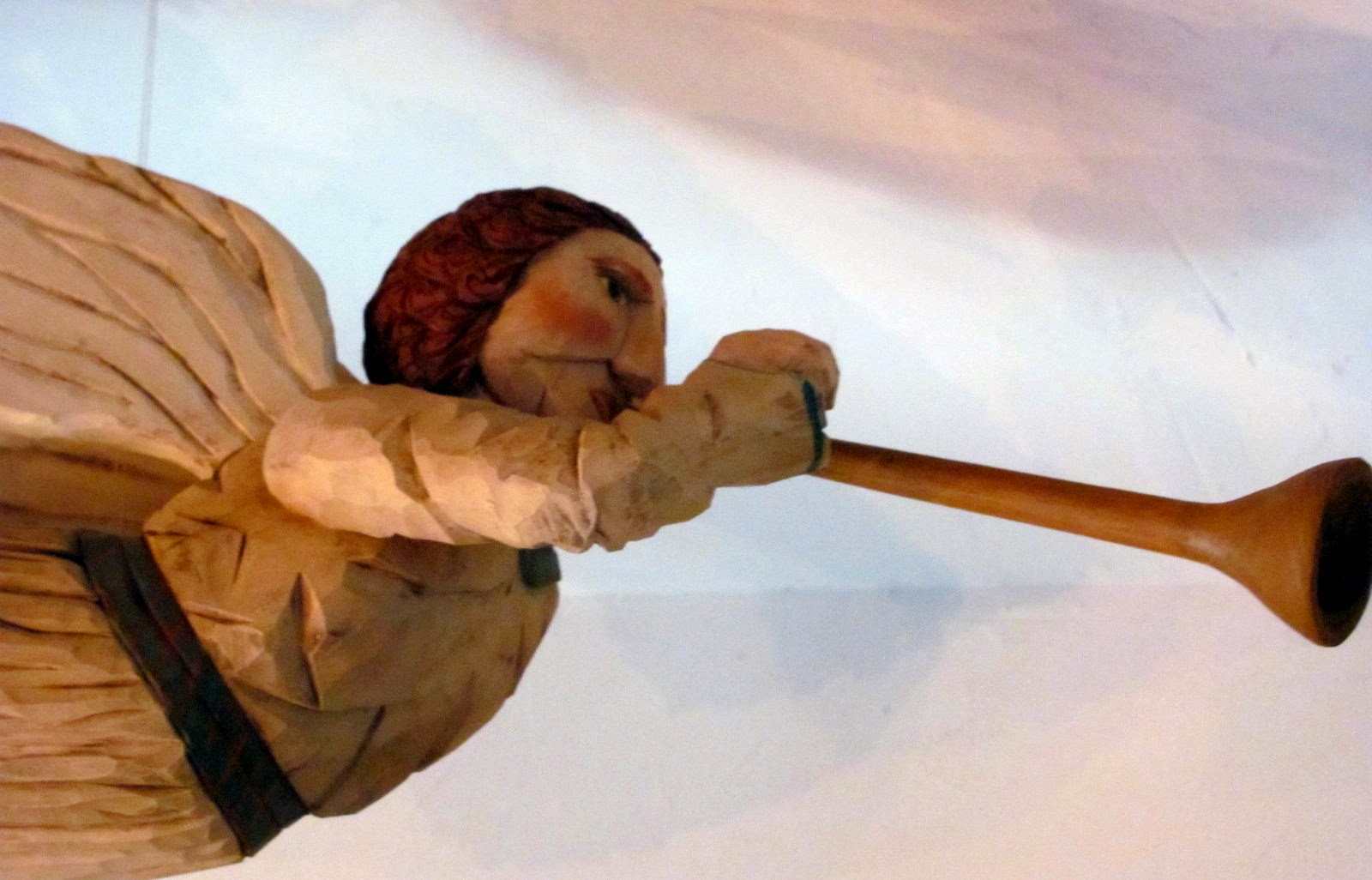 I've come to not like January so well. It seems that at this time of year we say goodbye to so many. I just learned of the death of another wonderful human being today, and coming next week and two weeks after that, the anniversaries of two dear friends. And I worry every day about several others whom I hold close to my heart, dreading the phone call or email or Facebook post that shares sad news. 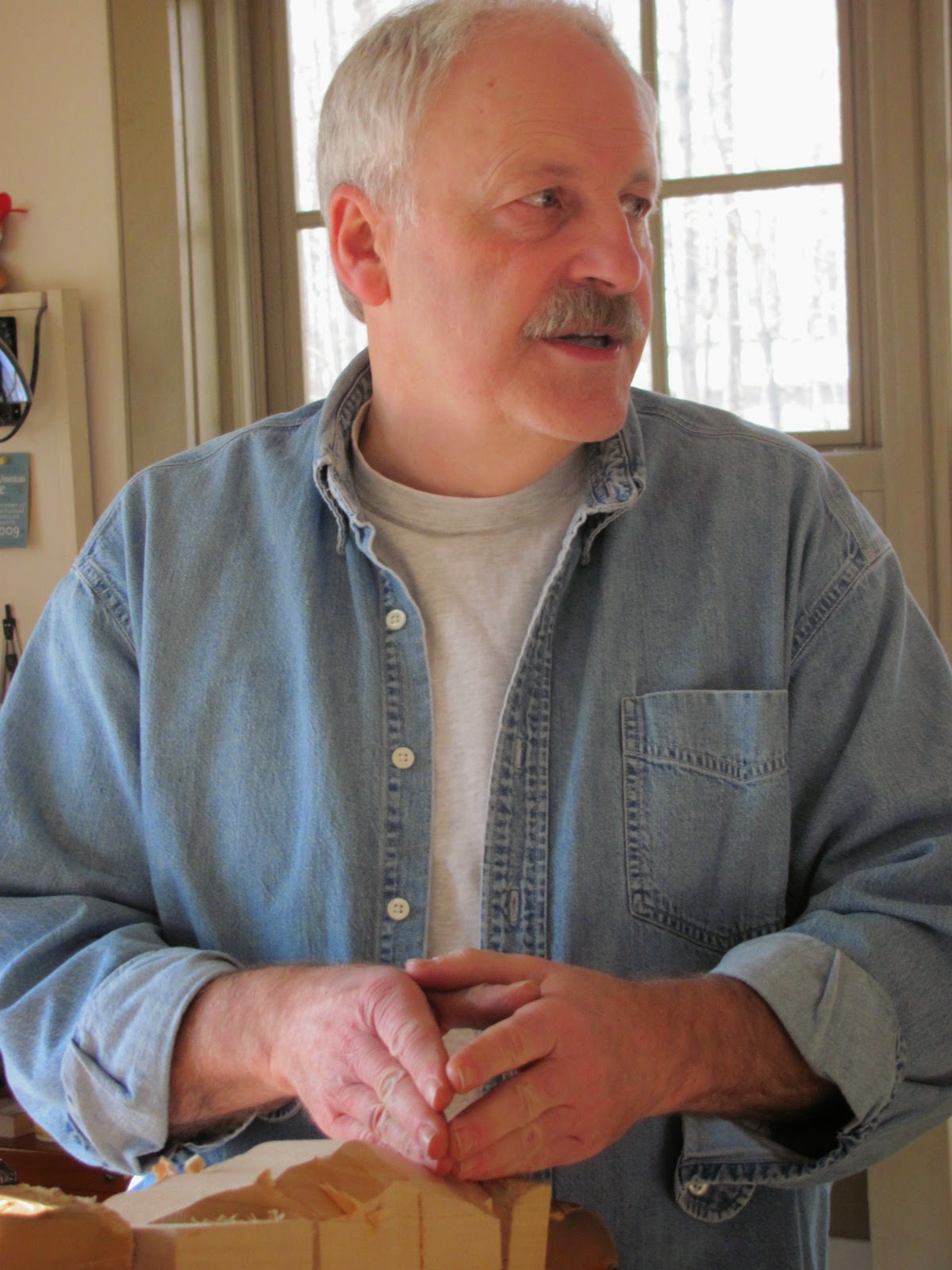 I didn't know Vaughn (V.J.) Rawson well. I knew his wife much better, and even she wasn't one of the "intimates" -- one of those with whom you are in contact on a regular basis. But I had been to their amazing home several times for holiday gatherings and to see their remarkable woodcarving. 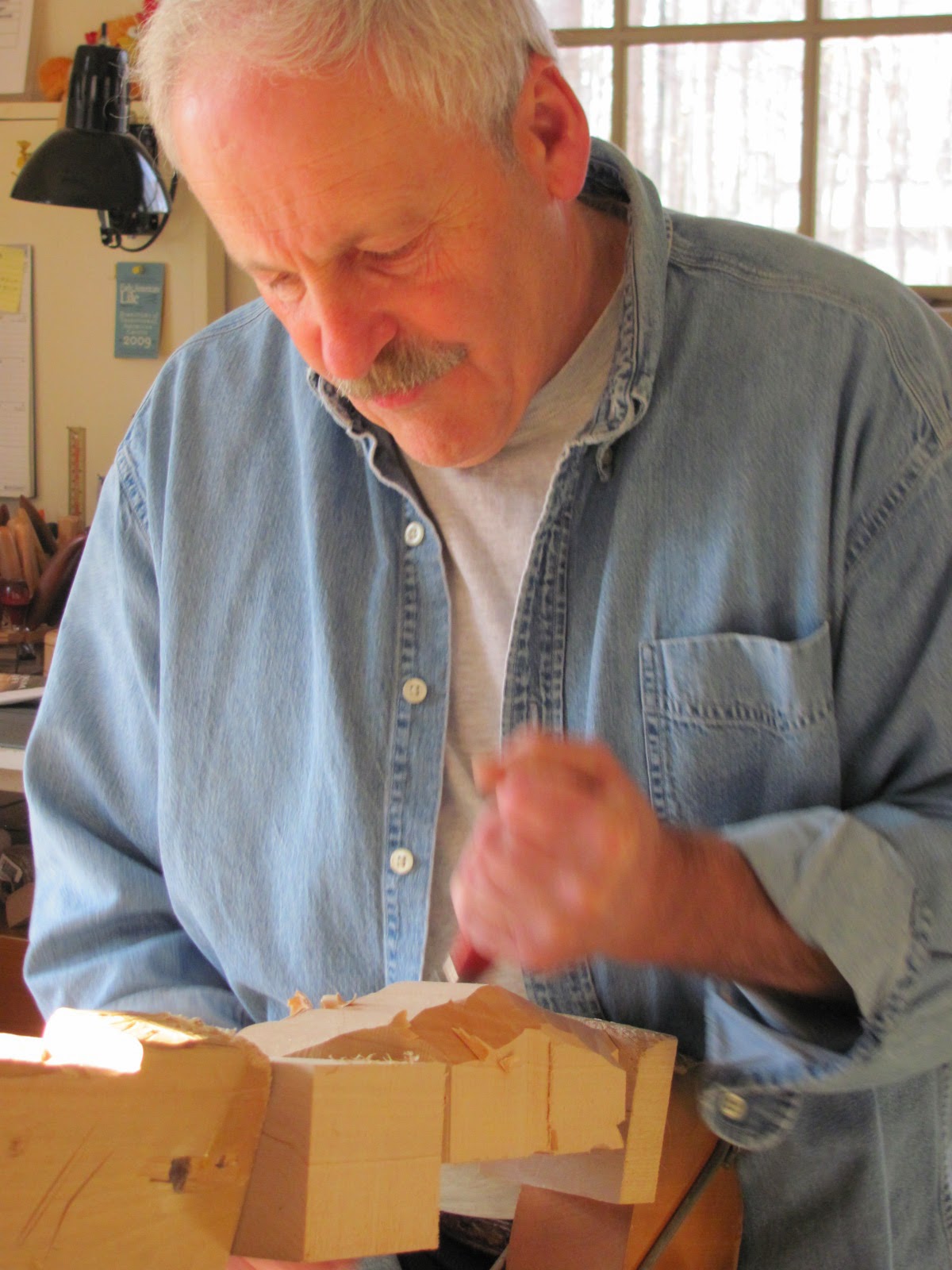 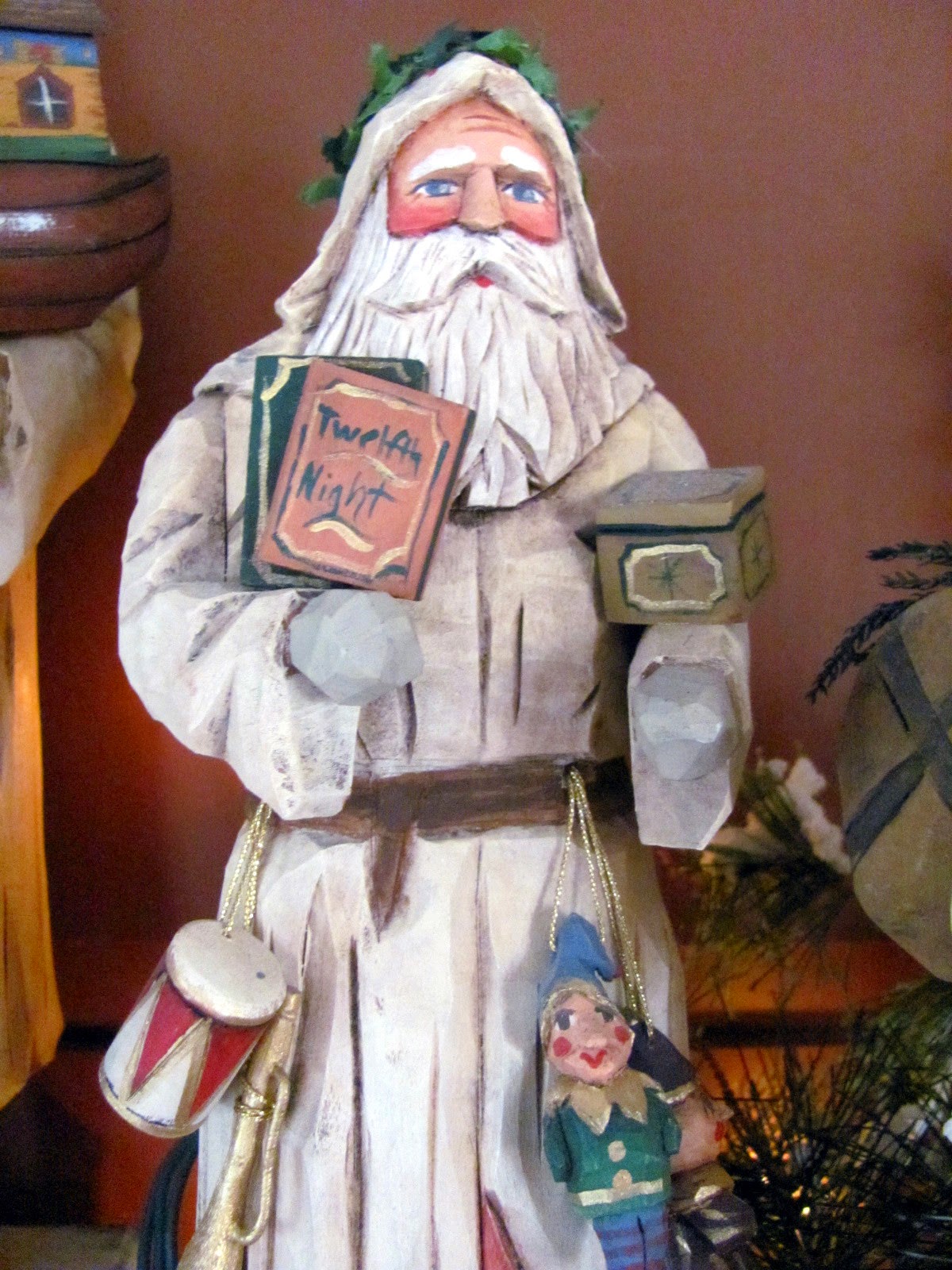 If you have followed The Marmelade Gypsy for any length of time, you may remember my posts featuring their work. V.J. carved the most magnificent Santas, snow people, Halloween figures and Dickens characters; Stephanie would paint them. They were known as The Whimsical Whittler. 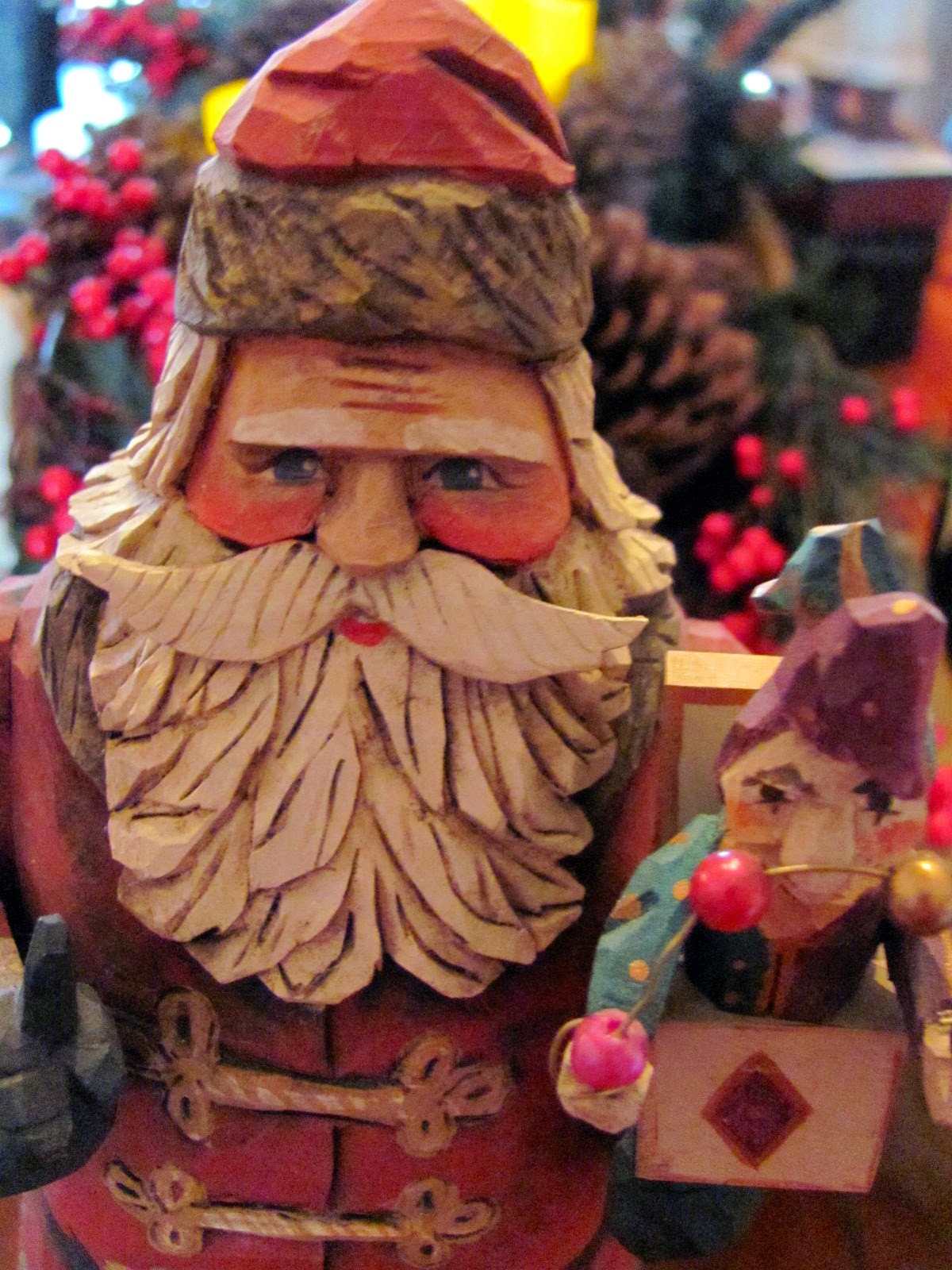 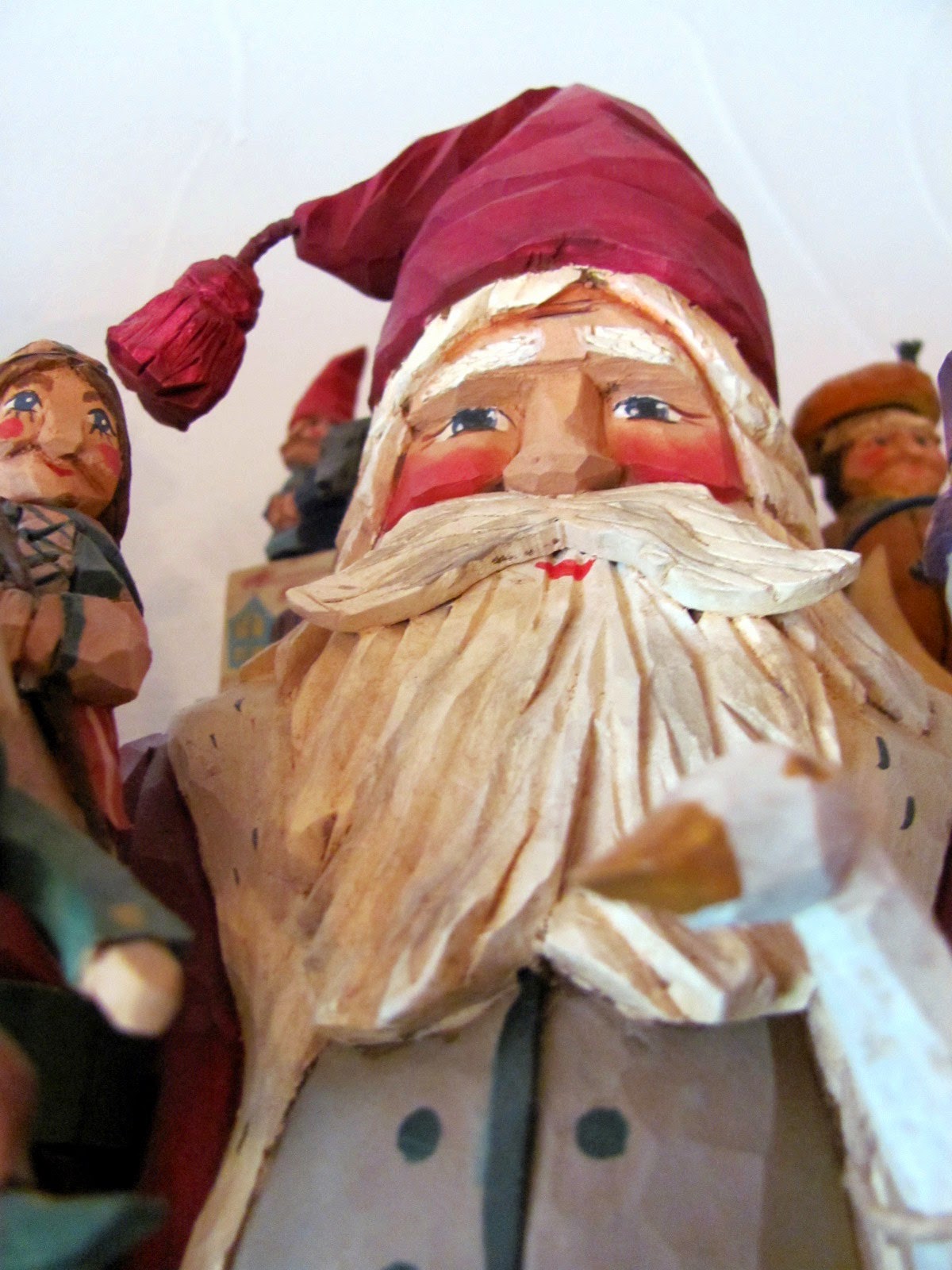 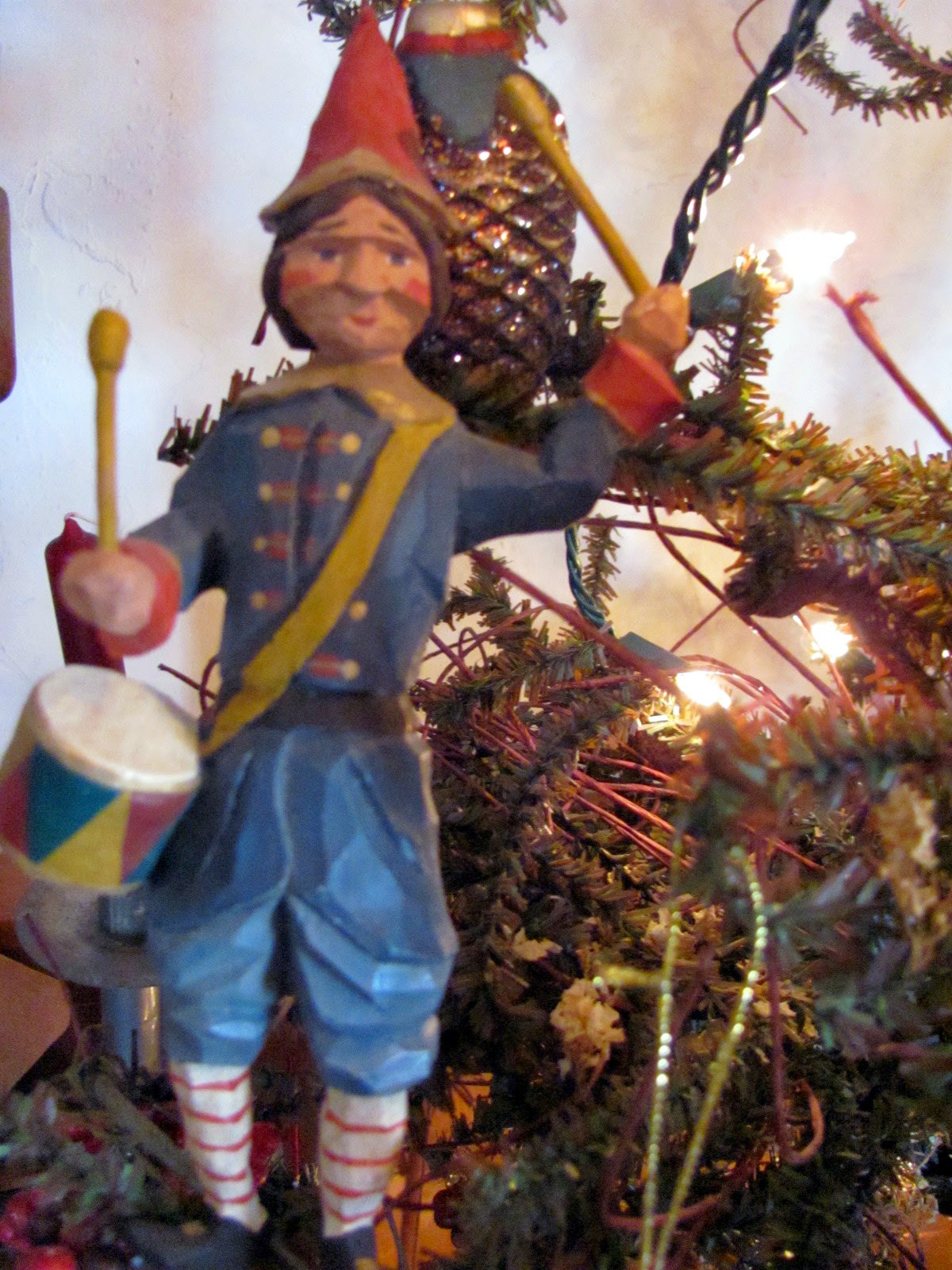 They had been featured in national magazines, had some of their designs marketed to Midwest for mass production and had their work included on the White House Christmas tree. 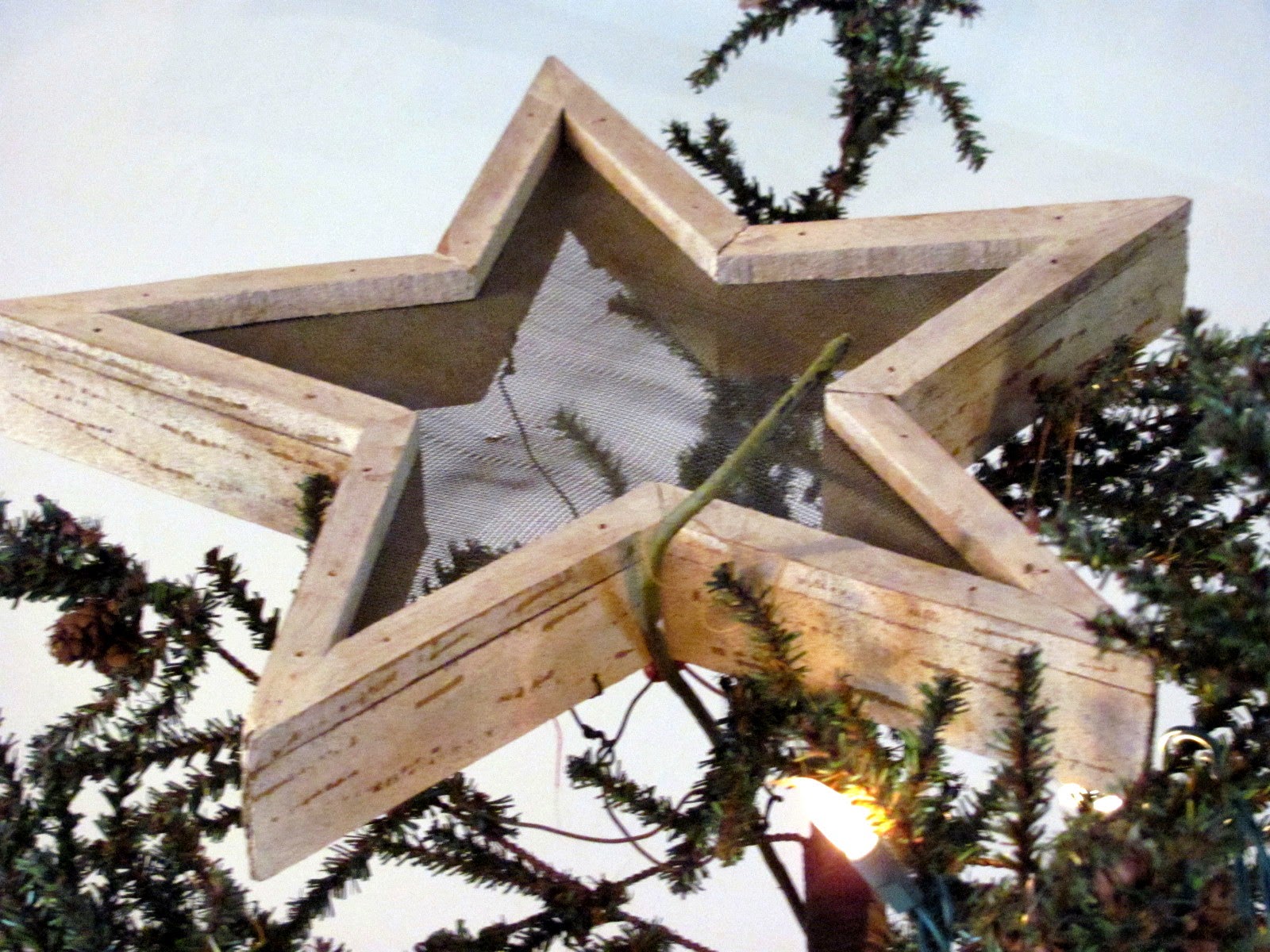 For some, cancer is in the gene pool. For others, it's one of those things we never really know. But V.J's fight was long and valiant, his creative legacy large. 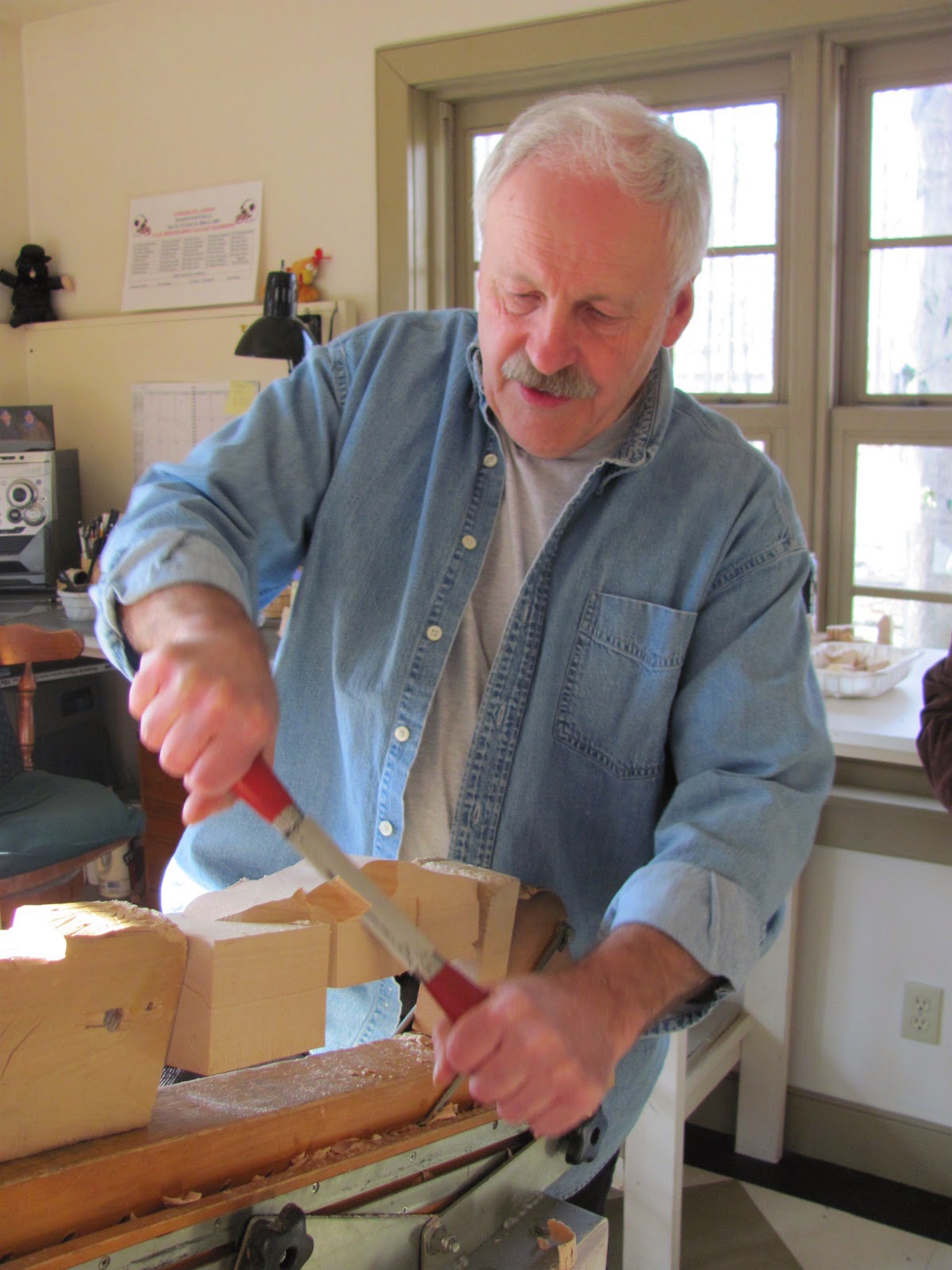 His final battle is over and my heart is very sad. 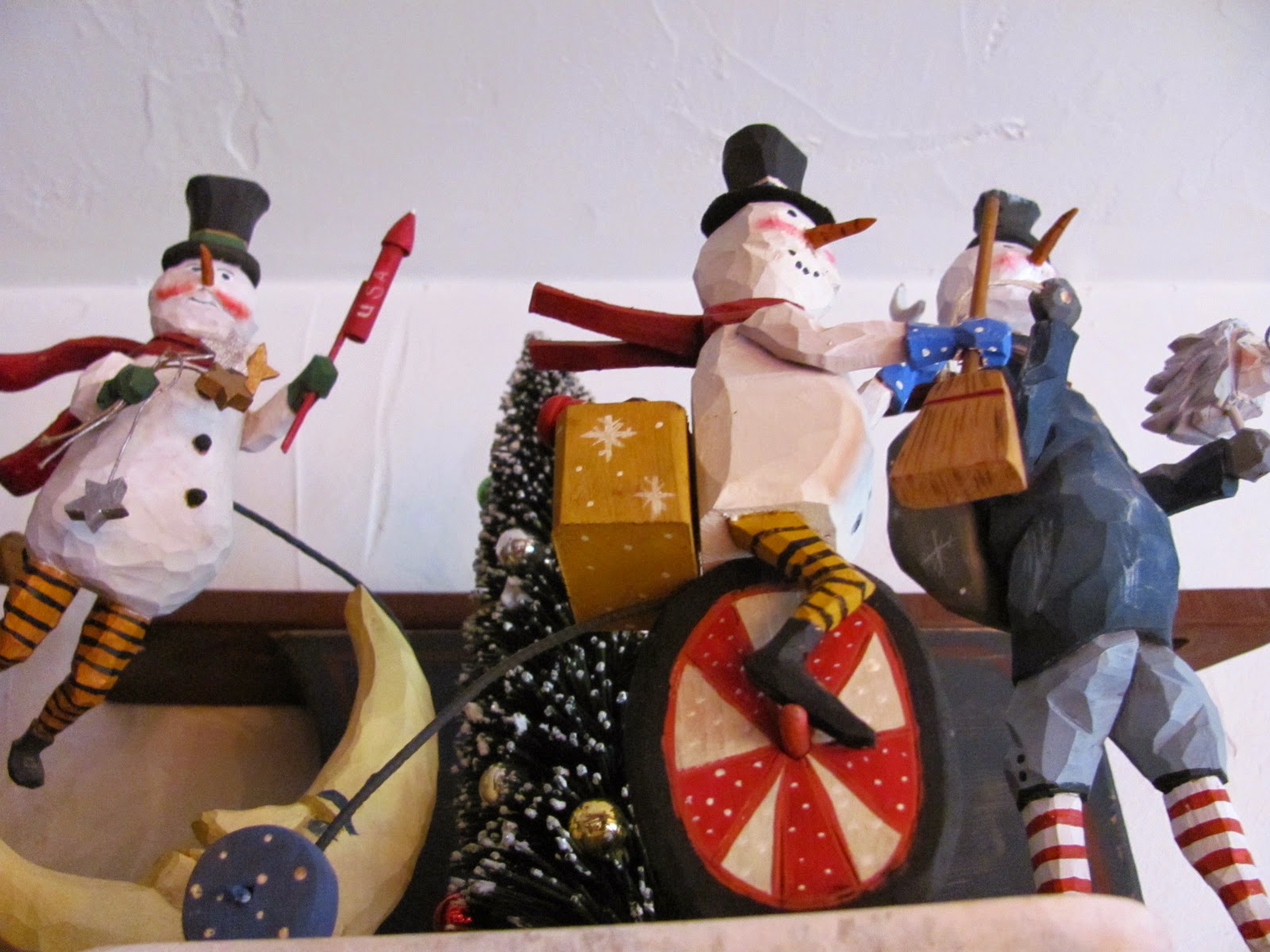 Sad, too, as I remember the anniversaries of blogger Diana ("Oh") and my friend, Mike Lewis. Diana's eloquent, delightful blog posts always enchanted me and when we met in person, I was thrilled that she was everything she was on the blog -- and more. 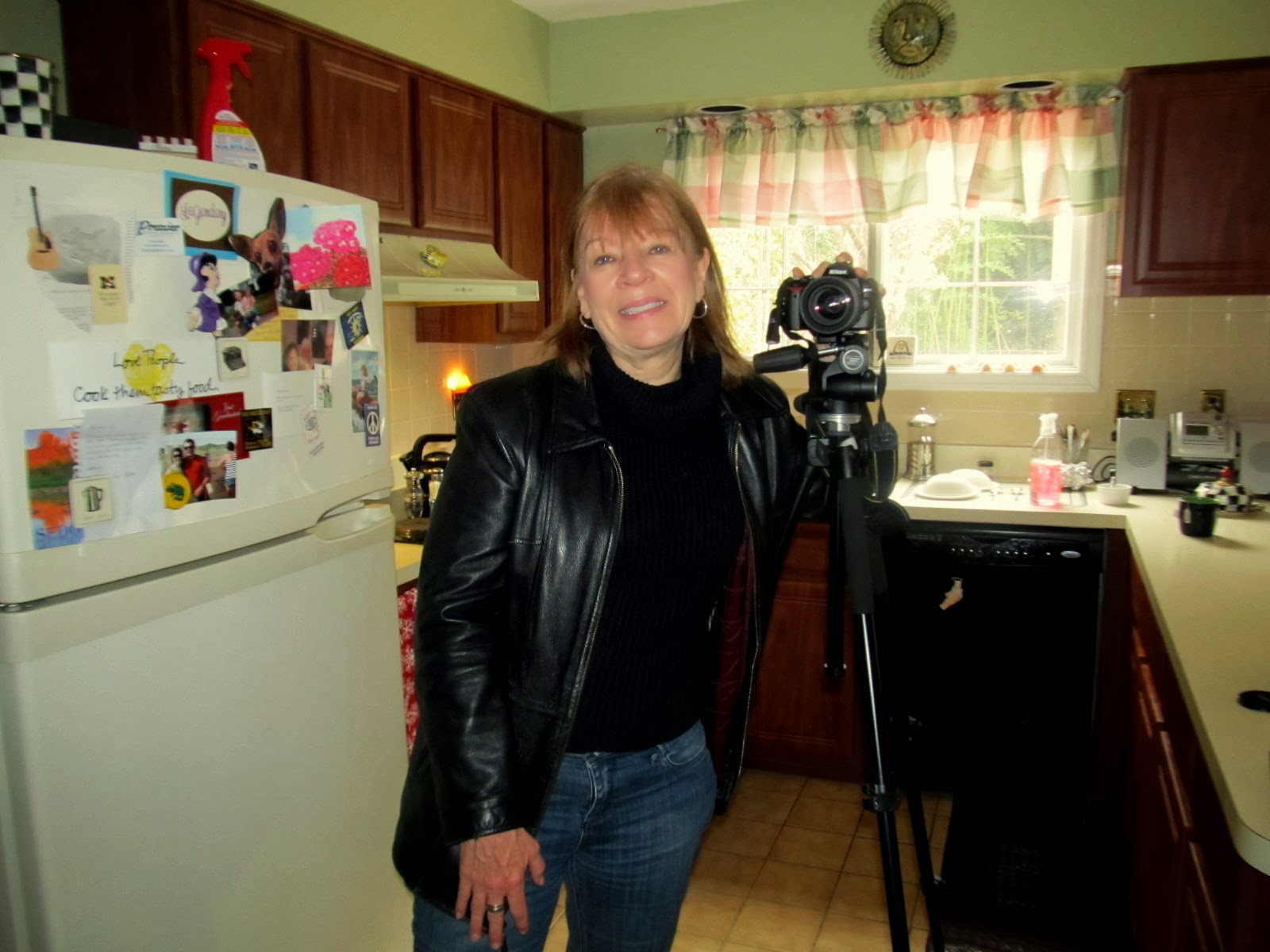 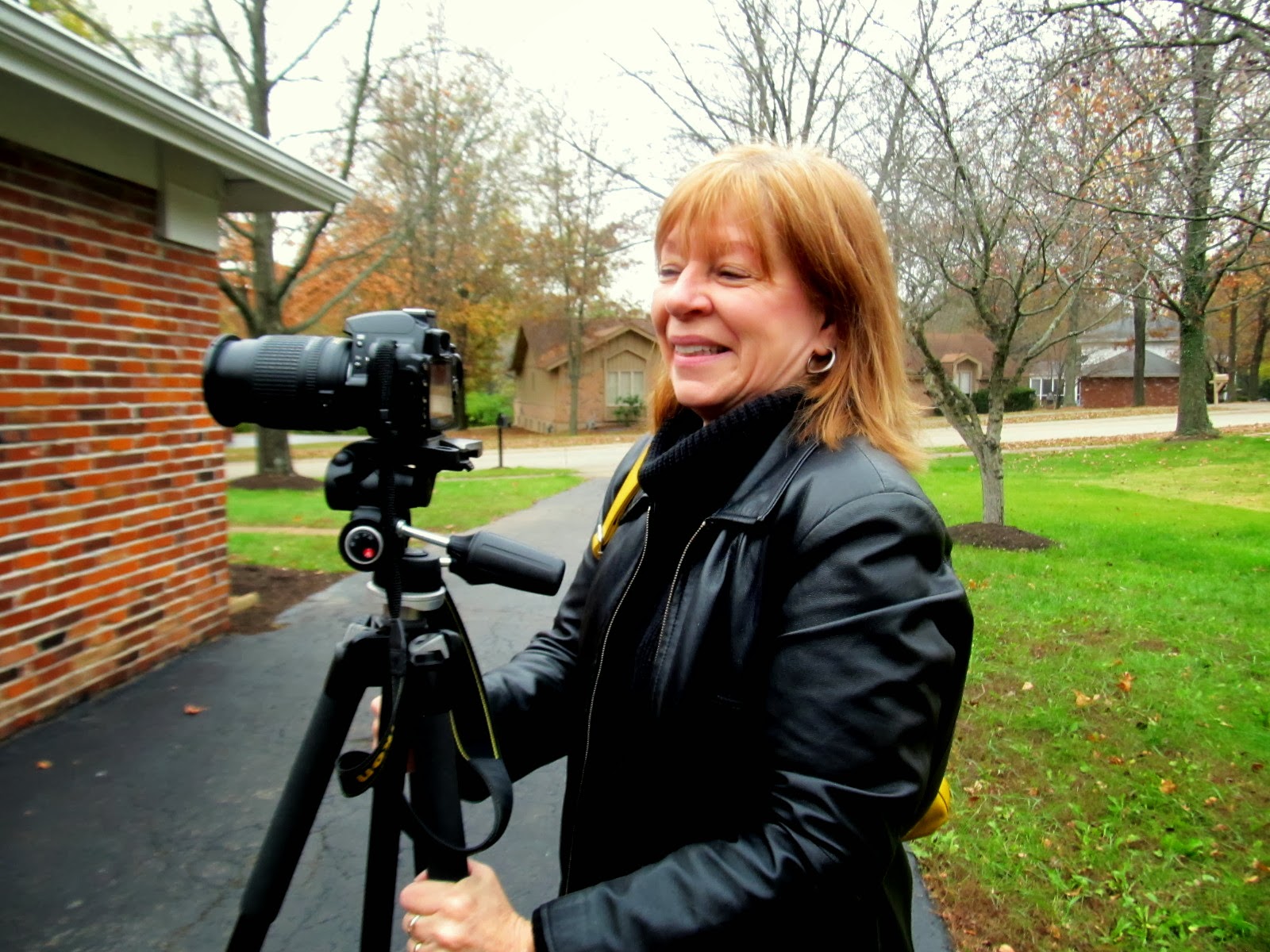 Mike was a friend from work whose heart was enormous and his dedication to friends incomparable. I can't think of him without a smile as he enriched our hearts -- and made many a tough day far easier to bear. 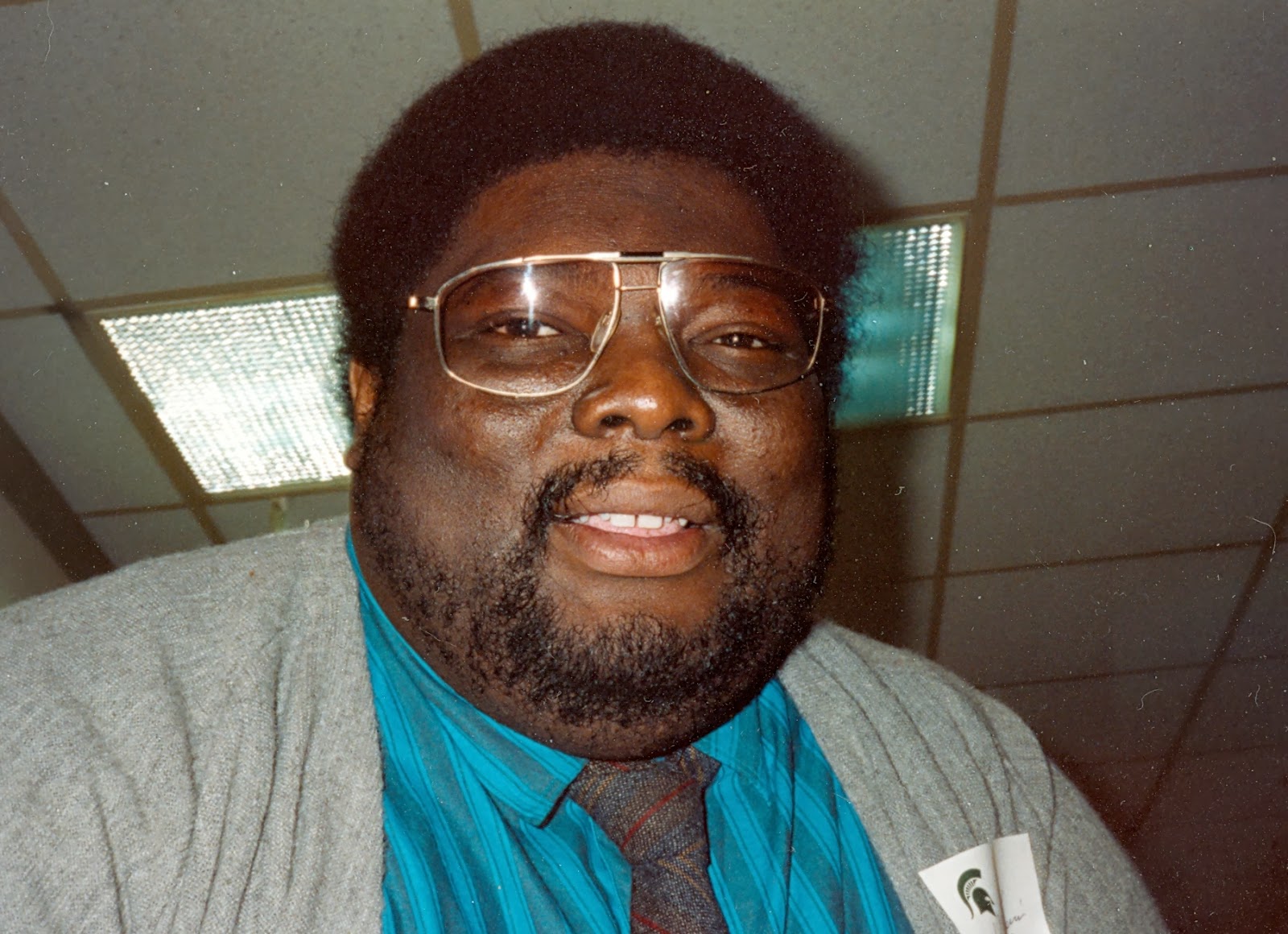 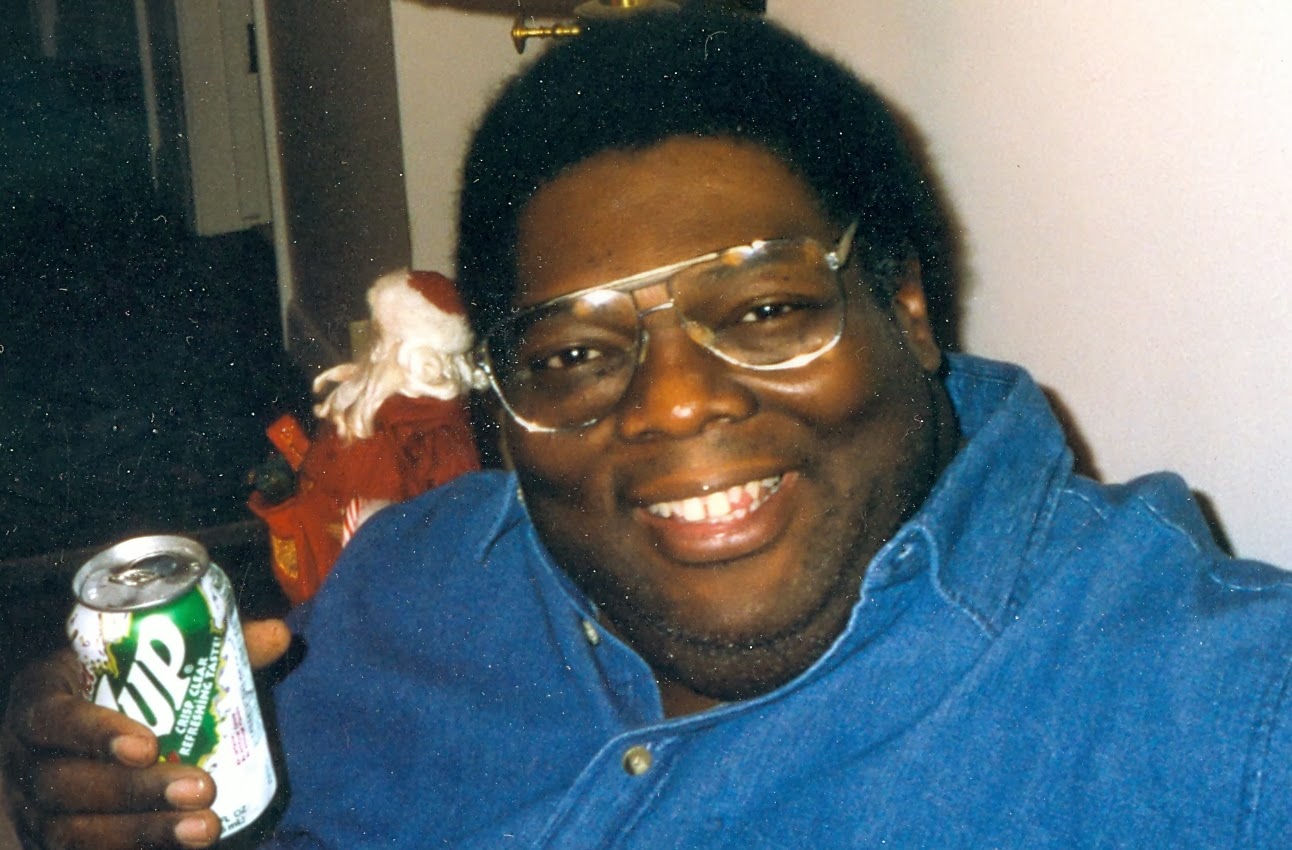 Both left huge holes in my heart. I mourn for their families and hope they know that these people they knew far better and far longer than I are not forgotten. 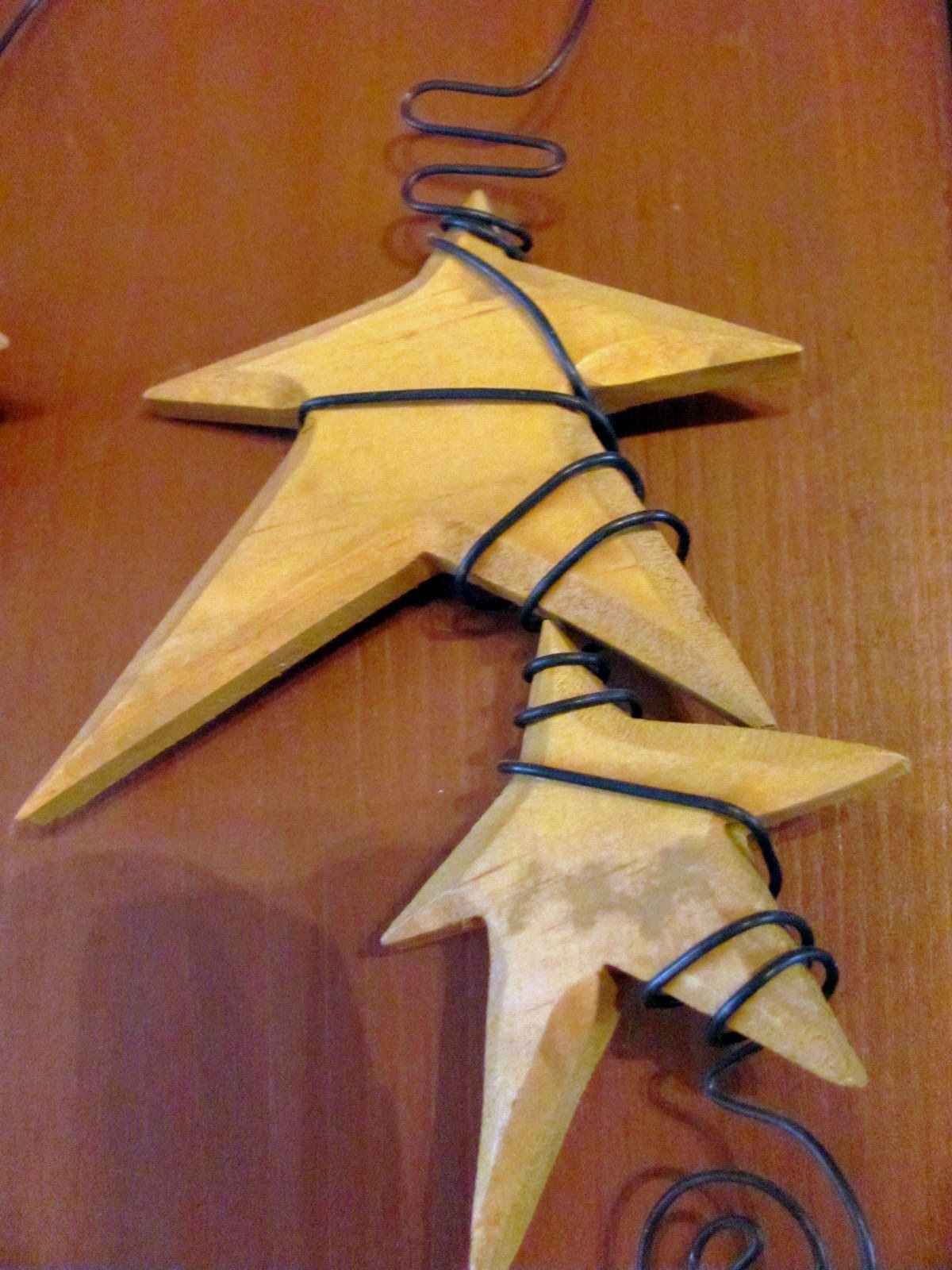 Tonight I look for a new twinkling star -- and know that V.J. is in fine company.
Posted by Jeanie at 1:20 PM

I'm so so sorry !!! I knew the wood carvers and see not only now his work really wonderful !!!
so beautiful I've carved santas never seen, they are really something special !!!
I'm sorry, dear greetings from angie from Germany

I'm so sorry to hear about the passing of such a talented man and friend. What a lovely post and beautiful tribute to your friends.

What a lovely tribute to some very special people, all gone much too soon! May warm memories and vivid reminders of their singular talents be a comfort to you. January does seem to be a cruel month. January 5 was the 11th anniversary of my beloved Aunt Molly's death. It seems like yesterday and a lifetime ago. These losses are all so painful and they only increase as we grow older. We can only be grateful -- as you certainly are in this wonderful post -- that they have touched our lives.

what a lovely tribute to your friends. The world has lost some special talented individuals. I hope that as the days pass you remember the happy pleasant memories and smile again.

Jeanie,
I'm so sorry about your friend. As I looked at the beautiful carvings, I though about what a team they were. The best marriages happen when we compliment one another.

I remember Oh. I loved her blog. Aren't you the lucky one who got to meet her?

A beautiful tribute to you friends.

Jeanie, your tribute truly is a lovely one. I mourn the loss of this wonderful artist also. Do you ever wonder if one whom creates such whimsical characters are whimsical characters themselves. From your photos, he seems so charming. He seems to have the personality to creating these fascinating figures from wood. What creative genius that takes!

I also remember vividly your posts about your other friends.

Oh dear friend, I am so saddened to hear that you have yet again lost someone near you. And as I scrolled down, I see your dear colleague that you lost last year. Then there are the senseless acts of violence all over the world, over in Paris.....

We are so fragile. But we have the power to make things right, to make them special. Hugs to you, Anita

This is a really sweet tribute to your three dear friends. I am so sorry for your loss and their family/friends' loss.

Dear Jeanie, I am so sorry to hear your sad news. He certainly had a gift to share. What a sweet tribute to your special friends. It can be hard to get through anniversaries of those we have loved and lost. Thinking of you, take care dear friend..

Dearest Jeanie,
My heart goes out to you and the family of this very talented man.. Cancer is an evil beast.. You have created a beautiful tribute to all friends lost.. I remember the post for Mike...
blessings,
Penny

It's so hard to lose people, but they do live forever in our hearts and memories; and their stars sparkle brightly in the night skies.

I am truly sorry for the loss you feel today. Hugs and prayers are being sent to you to comfort you. January is a hard month for me as well. My Cherished Mother passed away two years ago in. January. It's getting better, but I still have " those" days as we all do. Friends come into our lives for a reason. I like the comment you got from the retired teacher who said her Mother said If you can get through January you can make it through anything. I will jot that down and remember it!
Hugs Marg .

Oh Jeanie, I am so sorry for your loss... I'll keep the family of your friend in my thoughts and prayers. I can see how January is a month fill with heaviness and sadness for you - I feel those emotions, too, for Diana. I miss her emails and our exchanges about our love of Paris.

I hope that this month does not hold more bad news for you - it's tough when you are expecting more to potentially come. :(

Dearest Jeanie, I am so sorry for your loss. Your tributes to your friends are as amazing as you are. Keep looking for and to the stars - they come from our God. Love, hugs and prayers to a special friend.

I'm sorry for this new loss you've experienced. I do remember the carvings, and how much I admired them. And of course oH! has a special place in all our hearts.

One of our other "acquaintances" once said that April is the cruelest month. Truly, I don't think it's April that's cruel, or January, but the loss itself. As the grief ebbs, cherish the memories, as you have for so many others.

Dearest friend, what a group of angels to have left us. Your tribute to them touches the heart and reminds us all to cherish our friends and family. We are here such a short time. Big hugs to you.

I'm sorry your heart is heavy, friend; loss is such a sadness.
I wish you much sweetness in the memories and a keener sense of each day's precious weight and worth.
love and care,
Jennifer

I'm so sorry for the loss of this talented man. Courage and blessings to his wife and partner. Beautiful remembrances of all.

A lovely tribute. It is indeed scary dreading a bad phone call, it was always at the back of my mind as my parents got frailer, and is a horrid feeling. I try not to think about it too much.

I am so sorry reading about the death of this very talented man. His figures look lovely. I often think that especially the best people go first as you show with the other wonderful people who died last year.
Hugs to you!!
Iris

Such a talented man and such a lovely tribute to him.
Heather :)

Dearest Jeanie, that's so sad for you.
It's so hard when we lose friends and people we admire - it feels very personal and a feeling of emptiness.

Jeanie, I hate to hear about these deaths. I am so very sorry. It seems particularly sad when creative people die because the world seems diminished by their absence. Thinking of you as you think of them.

I also wanted to let you know that I don't have a follower's button on my blog. I never have. If you do Bloglovin', you can follow from there if you'd like.

I am so untechnical it is not even funny! LOL

Good morning Jeanie, I scrolled down to read a couple of your posts and this one touched my heart. How very sad to lose such talented people that touched your life in different ways.

May they rest in peace.
xo,
Jeanne