Paris In July: Slaying the Badger

You already know that I'm a Tour de France fan. I would probably have to be with Rick as a partner! But what you might not know is that Rick's son is named Greg and that (in part) an influence behind that name was cyclist Greg Lemond, who won his first of three Tours in 1986.

Lemond was the first American to do so, and he did it by beating five-time winner Bernard Hinault of France, who was known as "The Badger." 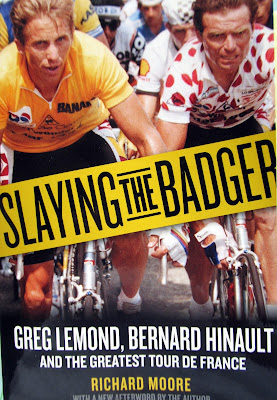 "Slaying the Badger" chronicles this 1986 Tour de France, the two who competed for it, their rivalry and the careers that led to it. It's a great book for those who love cycling or are just fascinated by the Tour.

Richard Moore is a compelling interviewer and writer who relies heavily on interviews with both Lemond and Hinault, their teammates and others who worked with them. He paints a picture of remarkably different personalities from different backgrounds who are teammates -- and rivals. 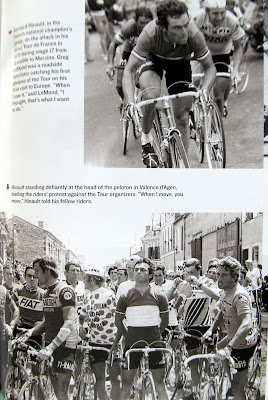 Here's something about the Tour de France that you may or may not know -- and it holds true today.

When you are on a team, there is the leader, the "patron," and that is the person that the team sets up to be the GC or grand champion. Teams have climbers and sprinters and those known as "domestiques" who help their guy to win and keep him fed and watered on the long rides. 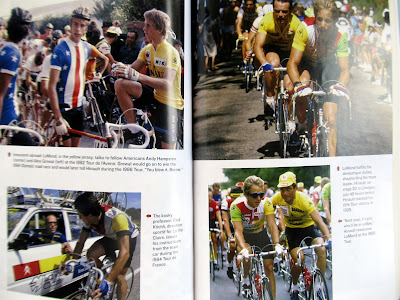 Now, there may well be other riders on the team who are as capable of winning the GC as the team leader is. Take a look at last year's winner Bradley Wiggins and this year's leader (as I write this), Chris Froome. Froome may well have won last year -- but he was told to hold back, to help Wiggins. 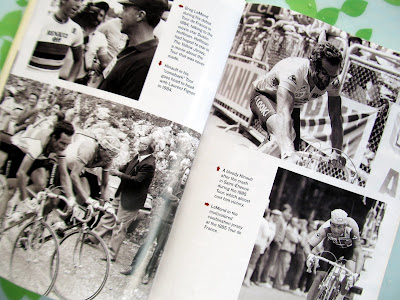 The same situation happened with Lemond and Hinault in 1985 -- and it didn't sit well with Lemond. He was told by Hinault and their team manager, Bernard Tapie, "Next year you will win."

But Hinault liked winning. Others had won five tours as well. Did Hinault want a sixth, record-breaking win more than fulfilling his promise to Lemond? 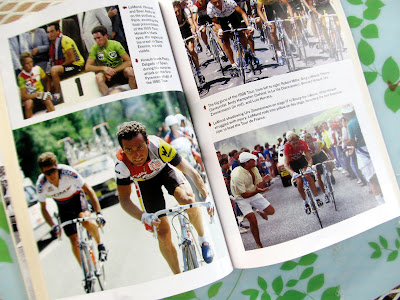 Moore pulls together a captivating story with lots of behind-the-scenes drama. He tells it well, and one can't help but learn a good deal about this sport by reading about these two champions. 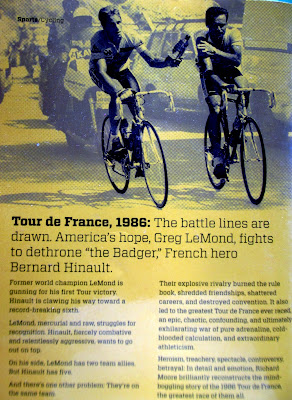 "Slaying the Badger" will not be for everyone, of course. But if you find bicycle racing and the Tour fascinating -- or for that matter, if you appreciate the mechanics and mischief behind any sport, you may well enjoy this well written book.

This post is part of Paris In July, a series of blog posts across the net sponsored by Tamara of Thyme for Tea and Karen of Bookbath. Please link to their sites for other Paris (and France)-related posts.

This post is also cross-posted on my book blog, Chopsticks and String, which is primarily reviews of books.
Posted by Jeanie at 11:07 PM

It's good to hear there's a book that makes bicycling interesting.

Fascinating! I didn't know, but suspected part of it. This is one event I wish was on my TV, I love watching it.

Interesting. I always listen to learn the winner but I've never really watched it. It is an interesting sport and so are all the shenanigans that go on behind the scenes. Sounds like a good book.

Very interesting! I knew there was a team aspect to this sport, but don't know much else besides that. It's pretty unique to have a sport where the team works together so that one guy wins - and that one guy pretty much gets all the credit (at least outside of those who know the sport well and understand how the efforts of others helped the guy win).

VERY interesting, Jeanie... I didn't know any of this either! Although, I must confess I don't follow cycling/Tour de France too closely. Tennis is my sport... LOL! So great to catch up with your posts having been away from blogland some days. Happy Weekend ((HUGS)) P.S. Now posting from my new blog: http://www.lifeofjoy.typepad.com/

Your enthusiasm and description makes it all sound very interesting....definitely more likely that I would pick up the book now.

Cool, I had no idea. Love the review.

It's sad how much the Armstrong scandal has damped my interest in the Tour de France. It was starting while I was in Paris but didn't seem to dominate the atmosphere the way I recall that it did years ago. (Maybe that's only the case near the end of the Tour, though). The role of the non-favored team members was much discussed during Armstrong's rides; in retrospect one wonders how he must have treated them.

This is what I don't understand... I've always thought the Tour de France is an individual sport competition, well until the Armstrong debacle. Why a team? What's the role of the team members, I mean, those who are not supposed to win? Like goons in a hockey game blocking others so one person will win?

I think bicyclists are oh so brave
....seems like a lot of skin
between the speed and the road.
There's something powerful about it.
Enjoy your summery reads:)
-Jennifer

I don't know - I just feel about cycling the way I feel about baseball. All those athletes I thought were so great - like Lance Armstrong - are just doing whatever cheating they can to win. With Lance's connection to Austin, of course we had years of idolizing, and when everything fell apart, we got more than a good dose of picking apart the details. Maybe I just got tired of it all, but it certainly brought me to the point where I just tune out when I hear "cycling" or "Tour de France".

I LOVE your vacation journal. And all the yummy foods and that cute cat's face :)

You're the second person I've come across who makes the Tour de France sound interesting. And I've just read a book by a lady who cycled round the world. Perhaps I should take up cycling again!