A big orange cat is sitting beside me this gloomy Sunday morning. I'd like to think it's too early for him to be trolling for treats, but the fact it, it's never too early or too late. Not receiving satisfaction, apart from a couple of rubs of the head, he jumps off. 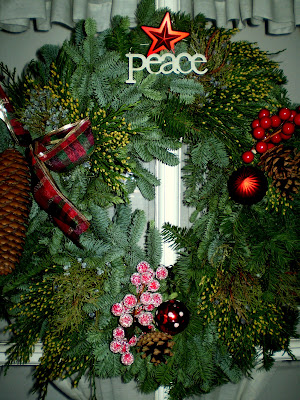 Much to do, yet I can't seem to get any of it done. Well, I've finished a bit. Yesterday I bought a lovely wreath which I jazzed up with lots of floral pics that I've saved from past arrangements. Pretty cheery. 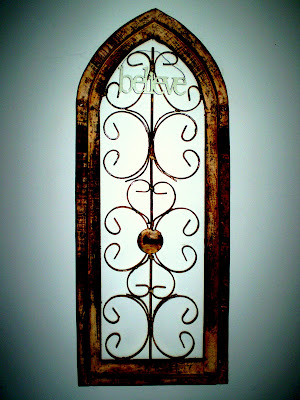 My inner door arch, bought a couple of summers ago at an antique shop, needs less decoration. Just a simple "believe" ornament. 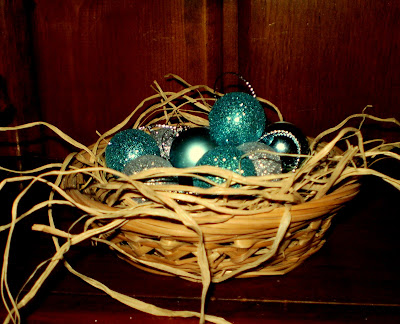 I've been bringing out some -- not all -- of the Santas. (Most of the snowpeople don't appear till January.) You'll see those later, but I did add a bird's nest to the mantle with pretty wee blue glittery and shiny balls. 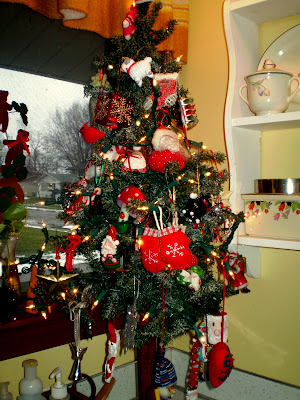 Trees. I do serious trees. This year, I can't seem to make myself drag the ornaments up. This one in the kitchen was easy -- small tree, small box of ornaments right beside it. It's cheery cooking in a decorated kitchen! 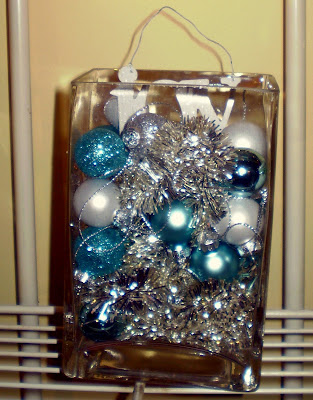 Most of the other trees were put away with lights on them. Only the big one is stripped. One by one, over a period of days, they are coming up. So far, no decorations for the most part. My sun-moon-stars tree (aka the Solstice tree) is nearly devoid of its traditional thematic elements. Instead, I started throwing whatever was available and at hand on it. Dried hydrangeas from fall's arrangement, some dried golden pods from the store, again for fall. 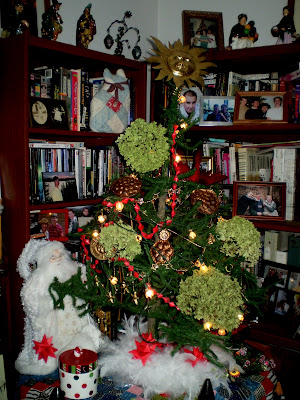 (Frankly, I'm not so sure about the hydrangeas... I think they're a little large for the tree. But it was quick. I can edit later.)

I need to photograph some of the clipboard ornaments I made. Haven't yet. 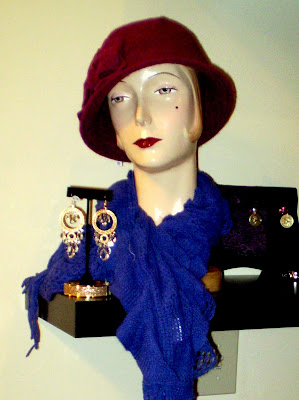 I did have a fun shopping bit with friends one evening last week at a store called Grace. 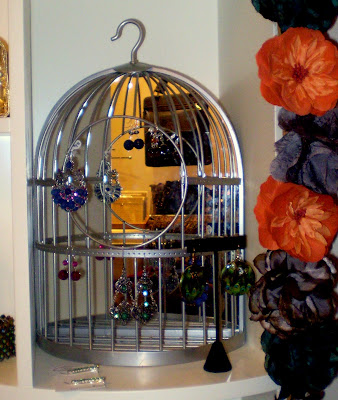 Holly (on the right with Sharon) organized an "after hours" at the Old Town boutique. 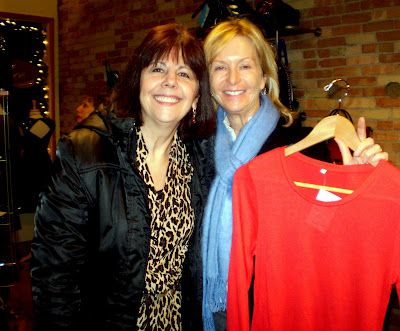 I'm anything but a clothes horse, but I really appreciate locally owned-and-operated businesses and I'll do what I can to support them. 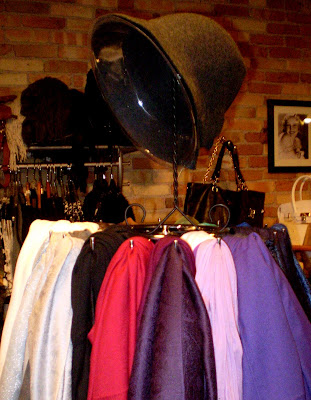 Most of the stuff is a little pricey for my budget and more sophisticated than my cords-and-sweater style, but really beautiful, and I did find a few stocking stuffers. 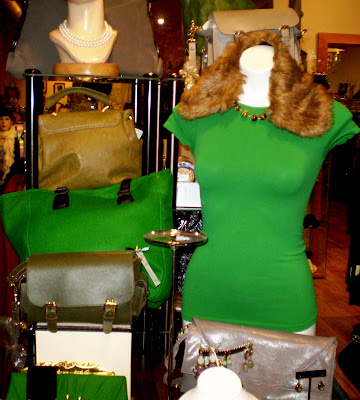 Shopping local is a goal for me this year -- if I don't make it and you can't eat it, then it had better support a local merchant. 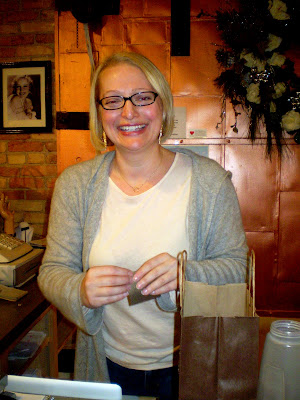 Summer, the owner, graciously welcomed our small group with champagne and truffles. 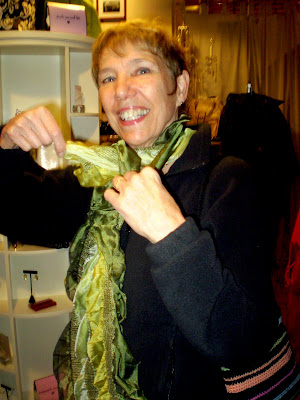 Kate was loving the green scarf, but opted for a purple sweater. 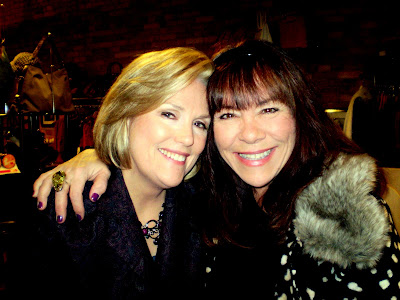 Writer Judy and TV news anchor Jane, two of our fashionistas, both found some treasures, too!

Laundry and other tasks call. Maybe a nice, upbeat holiday CD. If I get trapped into Hallmark movie marathons (and I always do), I'll never get anything done. (Honestly, you see them over-and-over and I still watch and still cry!)
Posted by Jeanie at 12:58 PM

You're way ahead of me on the decorating. HB and I aren't sure if we're going to put up the trees this year. So much work and it will just be the two of us. Maybe the wreaths on the doors and that will do it.

I've been watching the Hallmark movies, too. I record them and then watch them late at night after HB has gone to bed. I always cry, too!

PS - had to share that my verification word was "buntemp" and right now my bun temp is chilly!!!

i always wonder how the little dress shops stay in business....they always seem so empty when i visit and the sad thing is that i rarely find anything and then i feel guilty......

Your Christmas decor is wonderful! I love how you've added your own style to everything.

And Yay! for local businesses!

So festive! Glad to see the decorating begin! Around here, we're moving a bit more slowly in that direction -- no tree, for example, until our girl can decorate it when she returns from break -- but baking commences in earnest this week. And those incredible peanut butter/chocolate bars are first on the list!

Your blog is quite festive. I love it. I really like how you have your own style on decorating. That kitchen tree is darling.

My tree is finally up and decorated. I have been sitting in front of it all evening a really enjoying it. My hubby helped me this year. That is a first I think. It was fun for both of us. Now I have the rest of the house to do.

I love the festive little kitchen tree. I am trying to shop more local this year. Our little downtown has some really great little shops, but I have to admit that I have also done some shopping online.

loving the holiday cheer
you've splashed onto your blog:)
Hope these December days
are merry and bright,
Jen

Everything looks so Festive and Pretty! You do lovely decorations, my dear....! Thanks for sharing it with all of us!

You're still ahead of me on decorating, I like what you've set up. I agree with you about local shopping, handmade or food gifts (I do use Harry & David for gift baskets for Dean's work, but am also sending handmade gifts and local food for far flung family).

LOVELY decorating, Jeanie! Your big wreath is especially wonderful! We did some holiday decorating here too. And I made a Winter Solstice wreath, which was great fun to make from bits & pieces from my craft stash--photos soon. ;o) Fun with the shopping trip...thanks so much for taking us along! Happy Days ((HUGS))

You've already gone much farther than I have - or probably will! My enthusiasm for decorating wanes each year, I'm afraid.

But I love looking at yours :)

How fun to see the beginnings of your holiday decorations and shopping too. On the days I can't get myself motivated I turn the Christmas music up loud, it does seem to help.

You've been holding out on me, jeanie - I see those pieces of Hall kitchenware there, on the right side of your tree! Almost all of my Hall is gone now, but I have a couple of casseroles I've kept. Best ovenware ever produced in this country.

I just get overwhelmed looking at your decorating - it would be too much for me. But lo! I have begun. I left a pic of my first tree at oh's - bare branches of dogwood I brought home from Minnesota, hung with tiny silver and gold balls. It's close to a lamp, and reflects the light. I like looking at it.

And shopping locally? It's the best. I like knowing who I buy my things from - and knowing my money will stay in the community.

Everything is lovely decorated, Jeanie!
What a wonderful wreath!!!

That shopping event looks like a lot of fun!

Your card with ATC is on the way to your home. I hope it lasts not too long!

Beautiful! I love your decorations. It's so fun to see how others decorate their homes. I will have to do a post with a picture of my tree!

I love to shop locally too!

Love your decorating. Every year, about this time, I lose all enthusiasm for dragging out the decor, probably because I have been looking at it in the shop since October. LOL. And yes! Support your local shops! Otherwise, they won't be around.

These are the posts I look forward to every year. I love Christmas tradition celebrations.

I felt so guilty I don't have decorations up yet, but have been so busy finishing gifts to get in the mail and finishing my semester that something had to give. Having received 10 Christmas cards already, though, put me over the edge. Got my card display up and will attend a holiday party this afternoon - maybe see you there?