Preface: Some of you asked about the reference to soap in the last post. If you saw the movie "A Christmas Story," you may remember when Ralphie says a bad word -- not Fudge. (You can see that scene HERE.)

His mother makes him suck on a bar of Lifebuoy soap, during which he imagines himself having gone blind from soap poisoning. Let's just say that during the plumbing incident, Rick didn't say "Fudge." The ceremonial licking of the soap was his penance!
* * * * *
The good thing about having one Christmas on the evening of the 23rd and the morning of the 24th is that there is time to have another! 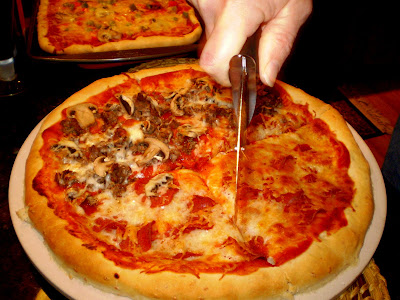 We didn't really have "real" Christmas Eve plans. Kevin and Molly were at her parents' and the three of us weren't sure what we'd do. Then Rick talked to Paul Davis. 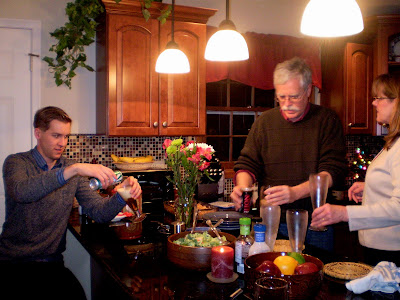 Paul and Bonnie live in the neighborhood where Greg grew up and he and Matt were friends from Kindergarten. 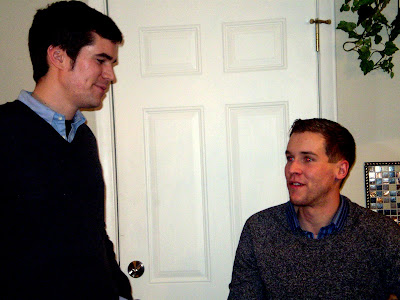 Both were creative, in the same Scout troop (with Paul and Rick overseeing the Pinewood Derby and a massive cake-baking fundraiser!).

So, when Paul said, "Come on over for pizza," we were so there! 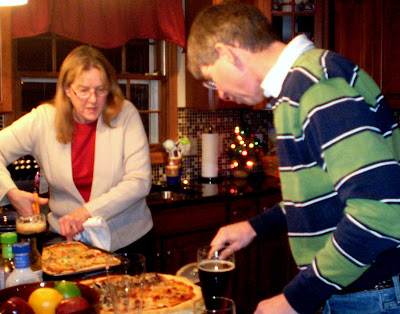 As we walked in, he said "After dinner, we're making Christmas ornaments and you can make as many as you like, but you have to leave one here for our tree."

Is that not the coolest thing ever? 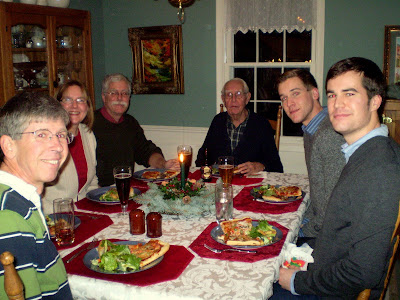 Rick, Bonnie Paul, Paul's dad, Matt and Greg. I am taking the picture.

So, make we did! Rick turned out a bicycle. 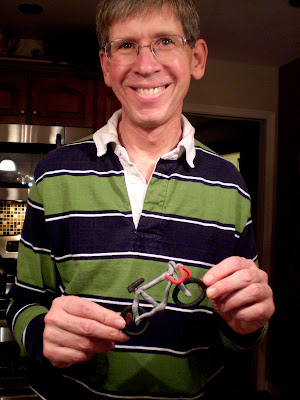 For my ornament to leave behind, Paul is showing a pizza I made to remember the evening by. 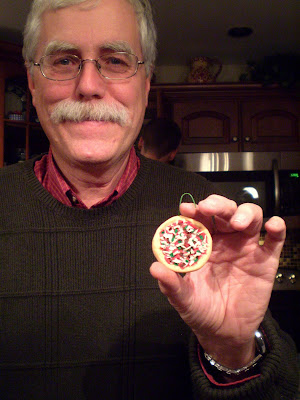 I also made the cat below and a very cute choirboy that photographed very badly! 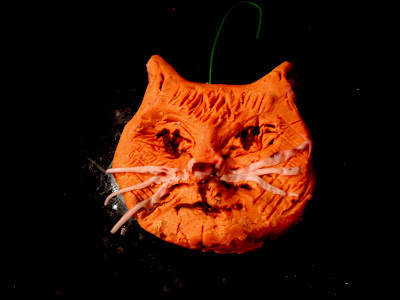 Of course, there's one in every crowd! 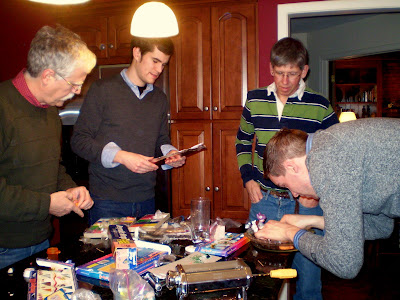 Greg made this creature that must speak for itself. 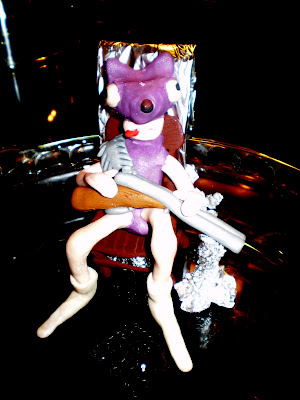 I can't describe it, apart from that it was a creature with a purple headdress sitting in an elaborate chair holding a shotgun! It attracted quite a bit of interest during its creation as Matt chipped in with a support system! 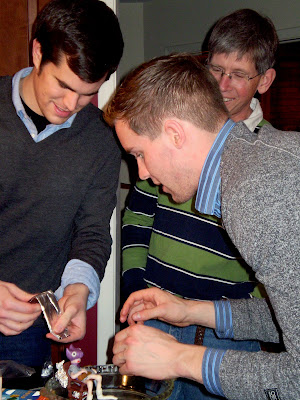 I think a lot of you will "get" this -- to me, sharing an evening with good friends and having the chance to do an art thing was so over-the-top for me, I'll never forget it!

Christmas Day brought presents in the morning with Rick and Gypsy. 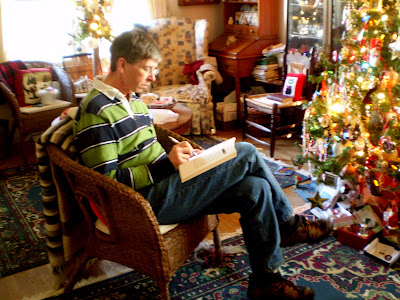 The evening brought friends Mike and Kate over for dinner (with Richard stopping in later). 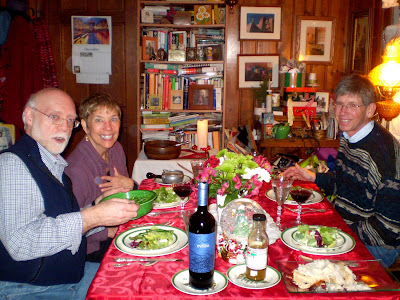 I have to say -- I'm going to make a "Flat Jeanie-on-a-Stick" -- like a flat Stanley, so when I'm the photographer, Rick can hold me up and I'm still in the photo.

Gypsy and the Bow 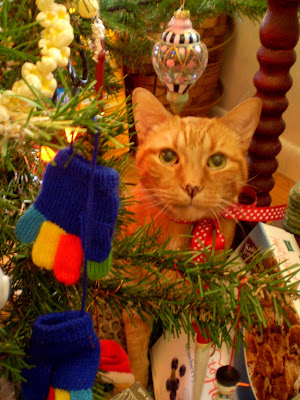 I said I'd tell you about what Gyppy thought of his Christmas bow. He looked so cute, with his polka dotted bow, that when I left for Christmas #1 at Rick's, I left it on Gypsy. But when I came home later to get something, it was nowhere to be found. I assumed he had snagged it going behind the tree. 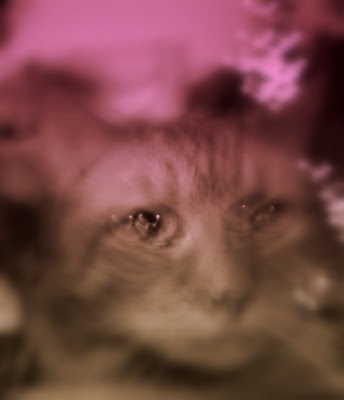 But later, when in the bathroom for obvious reasons, I happened to look in the toilet. 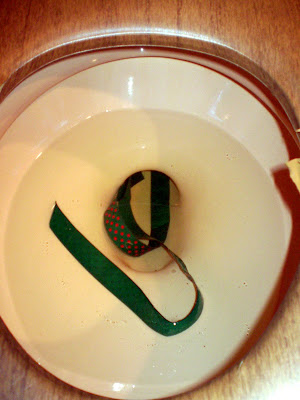 (Good thing that didn't get flushed down, or it would be Kevin and his plunger to the rescue a second time! 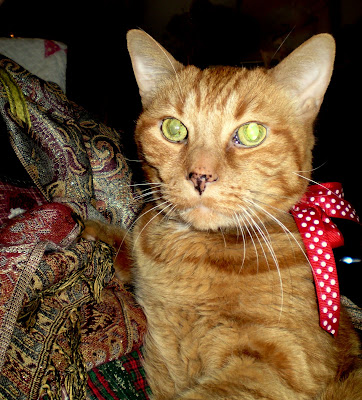 Couldn't even say "bad cat" because it was so darned funny! And he's so darned cute! 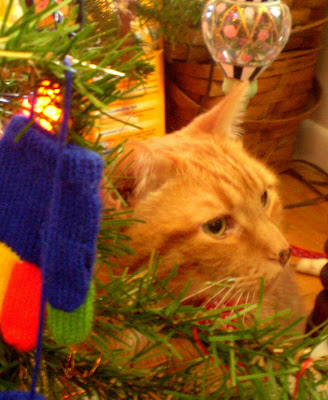 About the Puppy... We're still waiting for the final verdict on Charlie B. Barkin' -- but he's responding to treatment and Kevin says he's really skinny, but he should be coming home today (Thursday!). Thanks everyone for your good words; I can't help but think they helped!
Posted by Jeanie at 8:00 AM

Adorable Gypsy... as always. Love the ornament making party... what a great idea! And.... "fudge" was said during the tire changing incident... you knew that! ha!

I was smiling through this entire posting. I loved everything about it. I can only imagine how much you enjoyed Christmas Eve #2. I love these creative ideas on what to do when you have guests over on Christmas Eve.

As far as Gypsy goes, I think she let you know about what she thinks of your artistic touches. I love the photos.

I can hardly wait to see what you come up with for a "flat Jeanie-on-a-Stick." I'm sure it will be delightful, just like the real Jeanie. (I love the idea by the way.)

Lovely! Your New Year's Eve must be a blast! Especially with the count down. Have a Happy New Year, Jeanie, to you and yours! I look forward to your New Year/Eve Post. ;)

Oh my gosh, those ornaments are so cool! What a creative and awesome idea. And how cool for the hosts to have all these ornaments that will forever remind them of you. that is just too cool.

Looks like a fun holiday. And Gypsy is just too cute for words!!

That bow in the toilet is hilarious. Sweet Gypsy. How could anyone ever fuss at him? Your evening with friends seems perfect to me.

Thank you so much for the Christmas card. What a lovely surprise.

Oh, that darling Gypsy! Amazing trick, getting that ribbon off and into the "bowl." Wonderful animal story stuff!

Also, loved picture of your LR with Greg in chair and area rug and your tree - just perfect. Please come over and help me decorate my house.

No, better yet, just come over and we'll have an mini-art session and then talk our heads off about such stuff.

What a lovely christmas.
Next: we'd like to see the "flat Jeanie" that you come up with - and I agree, very necessary!!!!
Be assured, however, that your pictures are wonderful and we can picture you taking them!

Ya gotta laugh at that Gypsy! Sounds like you had a wonderful holiday! I love the ornament making. I hope that cute little puppy is ok.

It looks like all your Christmases turned out beautifully. And, I absolutely love the ribbon in the bowl - that will be a story to tell over and over. Still sending good thoughts for the puppy.

Hugs from your Dutch friends :)

Sharing pizza and art with friends is the very best. What a lovely way to celebrate. Love, love the story of Gypsy and the bow. So funny! They do entertain us. HAPPY NEW YEAR TO YOU!

Oh, Jeanie, this made me laugh -- looks like a great time with great friends! I love the ornaments you all made, and am completely with Oh: I think we need to see your "flat" Jeanie.

The Gypsy... gosh, the Gypsy is amazing. And way too funny!

Happiest of New Years to you, friend!

The pizza dinner and ornament making sounds like fun. And I almost choked on my water when I read about Gypsy putting the ribbon in the toilet! I guess you know what he thought about that!