The Scary Masks of Krampus

Last March, as part of a greater exhibit on masks, our MSU Museum had a lovely small exhibit on "The Scary Mask of Krampus. 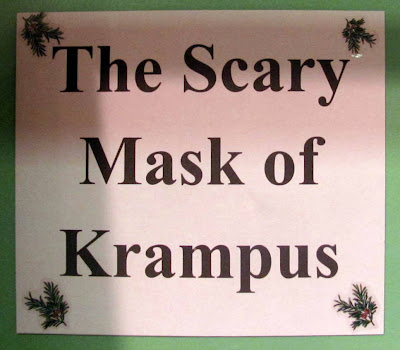 In Southern Germany and Austria, St. Nicholas comes to visit children on December 5 to see if they have been well behaved and done their schoolwork. 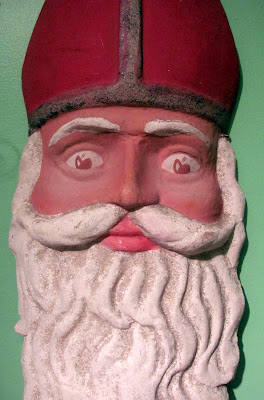 If they have, they receive a treat. If not, they have to answer to Krampus, the devilish and frightening traveling companion of the good St. Nicholas. 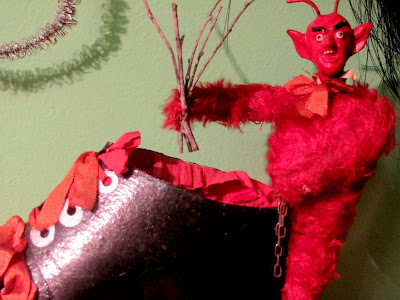 The exhibited depicted the good St. Nick and the evil Krampus. 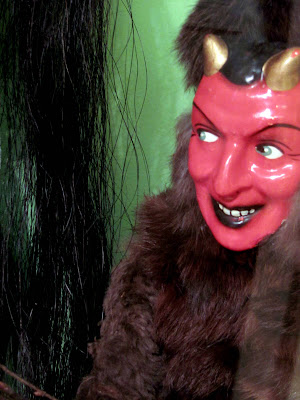 Also included were other Santa masks, advertising and ephemera. (The mask below is from J.C. Penney Company.) 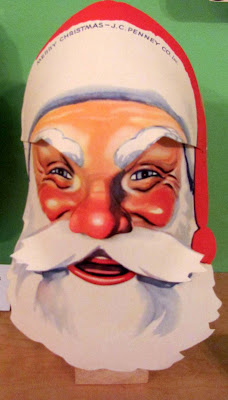 The beautifully curated exhibit (by the museum's Val Berryman, the ultimate holiday fan!) all featured masks (a theme at the museum this year) and other displayed items had some relationship to the story of Krampus or to Santa in general. 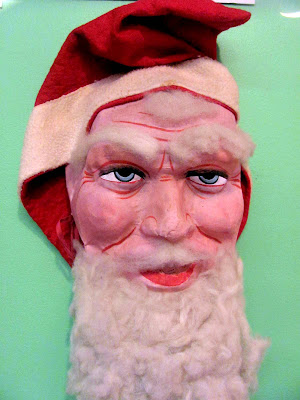 Collectively, the exhibit helps tell the story of "Santa" and the advantages of "being good" in cultures around the world. while also emphasizing the merriment and the intrigue of being concealed by a mask. 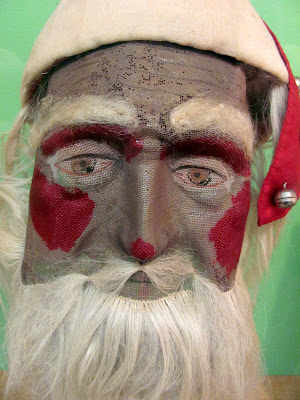 In Russia, Grandfather Frost is the Russian Version of Santa Claus. He and his granddaughter Snegurochka come to the children on New Year's Eve, rather than Christmas. The travel in a sleigh pulled by three horses. 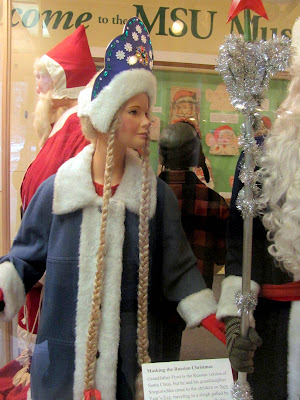 Grandfather Frost pulls his gifts from a babushka or a scarf he has made into a bag. 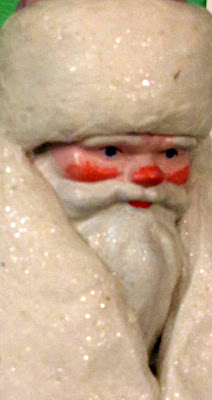 The exhibit combines the vintage and the contemporary. 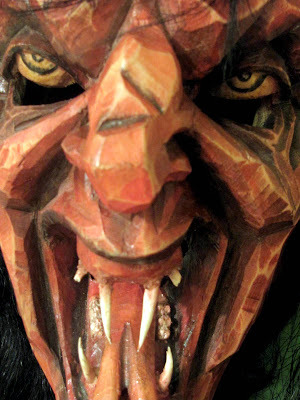 This Krampus mask (above) was made in 2004 in the shop of woodcarver Josef Streitfelder (Berchtesgaden, Germany) by his 26-year-old son, Stefan. Stefan also plays Krampus in the December 5 and 6 Saint Nicholas processions. 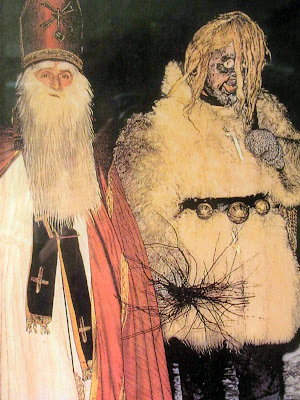 Modern day masks reflect Hollywood horror movie demons, such as the one above, made with real goat horns and fur pelts from long-meadow sheep. 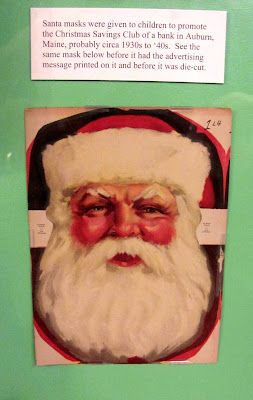 Marketers have never been immune to using Santa to their advantage. The mask above was one given to children to promote a Christmas Savings Club at a bank in Auburn, Maine. (1930s/'40s) 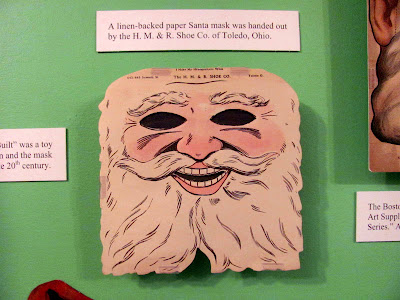 This mask (linen-backed paper) was given out by the M&R Show Company of Toledo, Ohio. 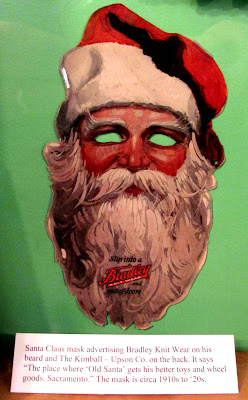 Even restaurants took advantage of the "merry old elf." The menu below was given to children dining at the restaurant in the Strawbridge and Clothiers chain in Pennsylvania and Delaware in the 1940s and '50s. 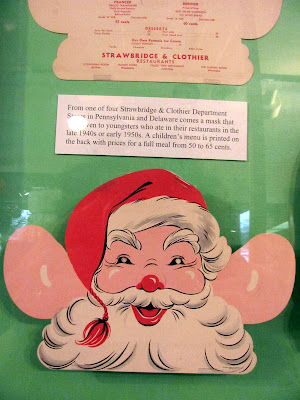 The menu is printed on the back, with a full meal costing about 50 to 65 cents!

Of course, commercialism in the holidays and using Santa's image to sell is nothing new! 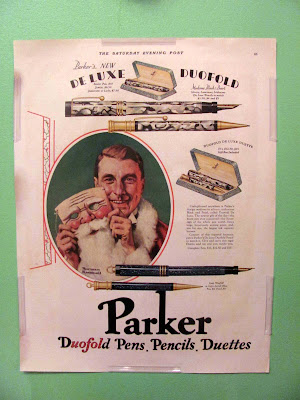 Santa appeared in a Parker Pens ad, while everyone familiar with Whitman Chocolates know they pull the heartstrings to sell candy at the holidays. 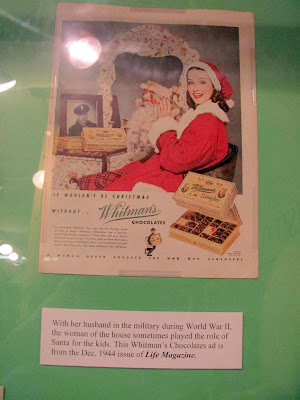 Many masks in the display were given as advertising premiums by various businesses, so even children could play Santa Claus. In larger stores, Santa himself handed out the masks. This jolly elf came from Mellingers, a California grocery store, estimated to be late 20th century. 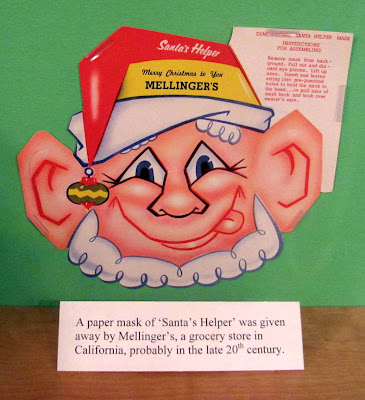 The Book of Magic was a special children's section in the December 25, 1921 edition of the Boston Sunday Advertiser. 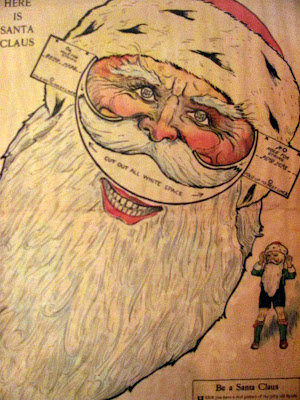 It had a two-page spread with an oversized, full color Santa Claus mask. The user would cut it out and mount card board or fabric. 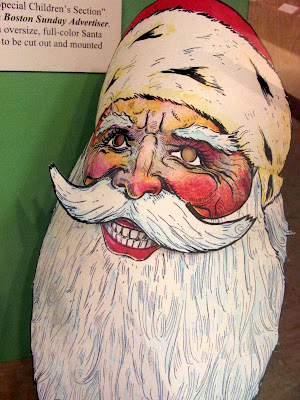 If you have some of these more recent boxes in your stash, consider yourself lucky! This exhibit not only looked at the older, more traditional masks, but those from contemporary technology as well. 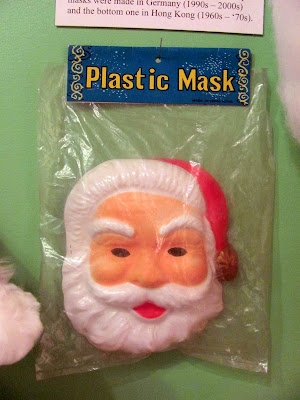 The advent of plastic offered cheap masks, not designed to last more than a season, the one below is late 1960s-70s (Hong Kong). 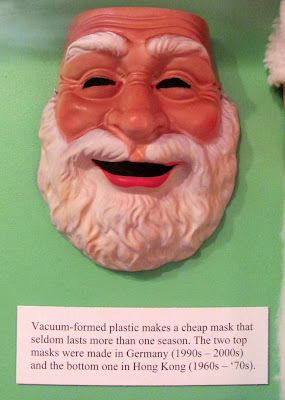 We started this post talking about Krampus. If you think he's only a character of German and Austrian holiday lore, think again! 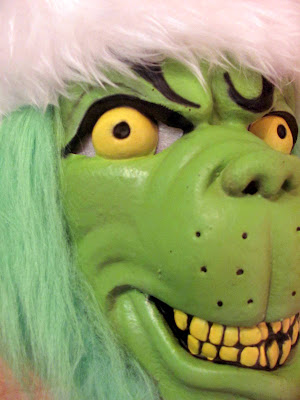 The Grinch clearly has Krampus origins and he remains a holiday favorite today.

To see related posts on other MSU Museum holiday exhibits from years past, check out THIS POST (Santa adverting), THIS POST (Holiday Crackers) or THIS ONE (Christmas tea tins).

(My thanks to the MSU Museum, on the campus of Michigan State University. Val Berryman has curated a new exhibit and I hope to get over there in the next week or so, so that I can share it with you! And all the info in this post is from that posted by Val at the site. Thanks!)
Posted by Jeanie at 6:35 AM

How fun to see this collection of masks. Some of them are rather scary and some I feel like I remember from my childhood.

I've never heard of Krampus! But my goodness - did I ever laugh at that last mask. The Grinch, indeed.

Just so you know how old I am, I had one of those Christmas savings accounts at the bank when I was a kid, and my passbook had a Santa on it. I can't say it was the same as you show here, but it was very similar.

Personally, I'm going to forget I ever heard about Krampus and start thinking again about Santa. You betcha I believe - he started coming to my house in person when I was about three, and was still stopping by when I was in college. The only difference was in the gifts - the first I remember was a floating rubber soap dish shaped like a duck. I ended with Chanel #5. SMART Santa!

After seeing that mask of Krampus I'm going to be such a good girl! Don't want him visiting me!

That is fascinating, but kind of creepy, too. I love it.

Very interesting! Love hearing about the customs of other countries. My friend Yulia is from Russia, so she told me about the Grandfather Frost tradition. Very cool to hear how others celebrate during this time of year!

This was very interesting! I have to say that the scary masks creeped me out. I can't imagine using such images to scare kids into being good. That really bothers me.

I really did find this entire post fascinating. You find the coolest things.

I've heard of Krampus (have to admit, I'm grateful he's never been a part of my Christmases), but never knew about the masks. Very informative post with (as always) great images.

I always wondered about the reason behind the Grinch, and that makes sense. Thanks for a wonderful tour of such wonderful icons of ol St. Nick. Enjoyed it! :)

What a myriad of masks, some of them look like the appropriate wear of Halloween! I've enjoyed your two Christmas posts, elegantly layout. I see you've changed to a festive theme too. Nice design. Thanks for rousing up the Christmas spirit for us, jeanie!

I never knew Krampus, or that there were masks for Santa, never thought of it. I should walk a few steps to the MSU museum more often! (But then, I have you.) What a tremendous exhibit and post! Some of these are really creepy! So that's where the Grinch came from, makes sense to me.

I found this so interesting, Jeanie, particularly the part about Father Frost. My daughter in law grew up in The Former Soviet Union and they celebrate the season on New Year's Eve. It's just so wonderful how you share these things with us.

really amazing collection.
To some of them I say "poor kiddies!"
-Jen

My dear...so many masks.I don`t know the name "Krampus"
but I know, who he is.
When I was a child,on December 6 St. Nicholas came together with a dark painted horribly lokking man with a big sac....He was called "Knecht Ruprecht".The tradition dictates that the good Saint Nicholas will come at the beginning of December to reward the well-behaved children by giving them sweets and other treats, while the evil Père Fouettard deals with those who have been naughty.
He puts them into his big sac....
I think he is similar to Krampus, isn`t he?
Best wishes
Iris

Oh my! I think I'm going to hide from Santa, in case he brings that truly frightening Krampus character down my chimney! Yikes, I had no idea! The Grinch was about as scary as I could handle. You're so right about the resemblance.

Thanks for brightening my day, Jeanie!

It's nice to be visiting again. :)

Krampus? Not at MY house! Only Jolly Old St. Nicholas - white beard, jolly cheeks, ho ho ho. And I'm leaving cookies so he'll know I don't need any of that funny business! Great collection of masks! You've showecased them well!

VERY fun, Jeanie! What a rich display of the art & history of Santa. It is somewhat surprising how some of the faces are what might be called "scary"...or startling... LOL... Fascinating! Happy Week, my friend :o) ((HUGS))

Wow that Krampus is pretty darn scary! I love learning about other customs. What a fun place to visit!

Hope that you are feeling better!