We had our first big snowstorm of the season last night. And this morning, it was truly a winter wonderland. 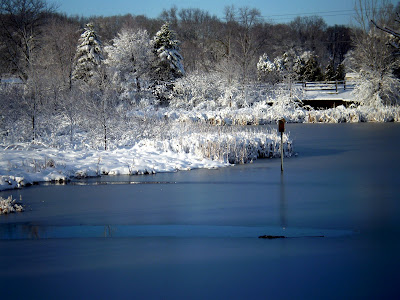 “Is it snowing where you are? All the world that I see from my tower is draped in white and the flakes are coming down as big as pop-corns. It's late afternoon - the sun is just setting (a cold yellow colour) behind some colder violet hills, and I am up in my window seat using the last light to write to you.” 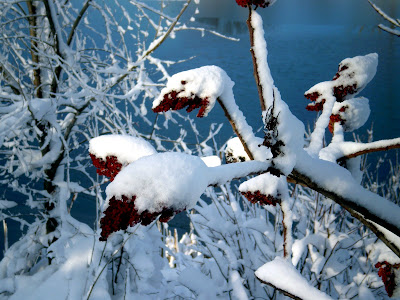 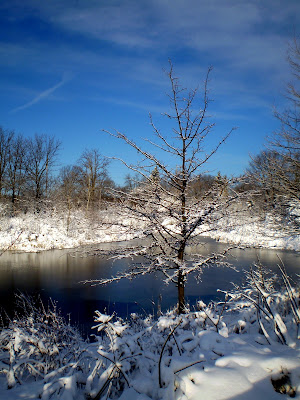 At the ditch, the snow was deep, the ponds still, the trees laden with white. 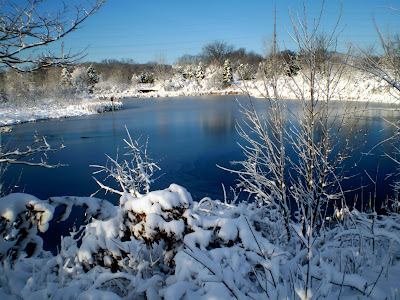 “A few feathery flakes are scattered widely through the air, and hover downward with uncertain flight, now almost alighting on the earth, now whirled again aloft into remote regions of the atmosphere.” 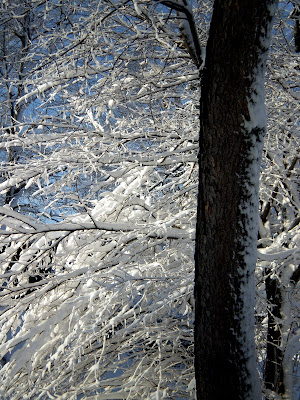 The giant pine outside of Rick's house was carrying its weight in snow. 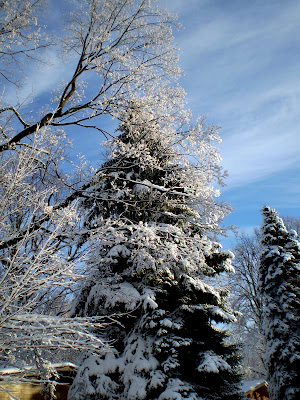 He's away this week. I'm hoping his kindly neighbor will plow him out! 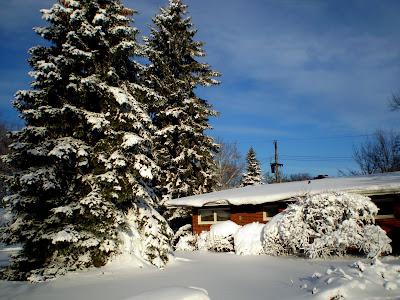 My street? It still isn't plowed, this evening, many hours after the snow. If it freezes, we'll be driving in ruts till it melts! 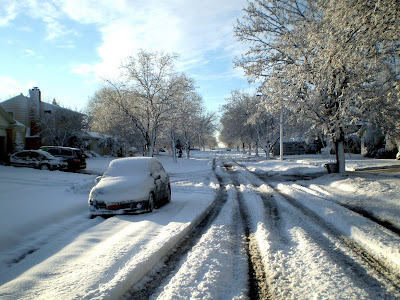 “I love snow for the same reason I love Christmas: It brings people together while time stands still. Cozy couples lazily meandered the streets and children trudged sleds and chased snowballs. No one seemed to be in a rush to experience anything other than the glory of the day, with each other, whenever and however it happened.”
-- Rachel Cohn, Dash and Lily's Book of Dares 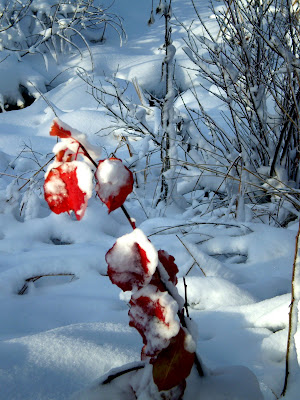 The snow was endless, a heavy blanket on the outdoors; it had a way about it. A beauty. But I knew that, like many things, beauty could be deceiving.” 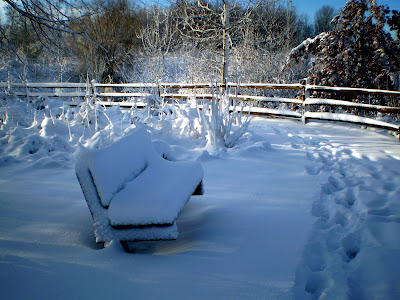 “Snow flurries began to fall and they swirled around people's legs like house cats. It was magical, this snow globe world.” 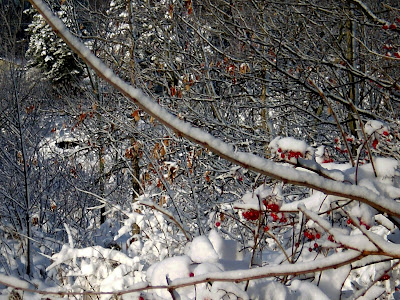 “It looks like something out of Whittier's "Snowbound,"' Julia said. Julia could always think of things like that to say.” 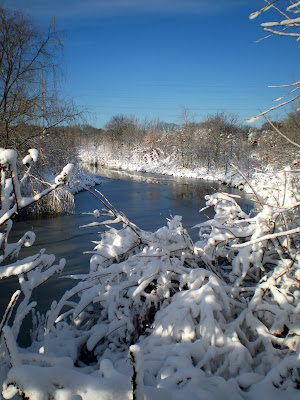 “Let every man shovel out his own snow, and the whole city will be passable," said Gamache. Seeing Beauvoir's puzzled expression he added, "Emerson." 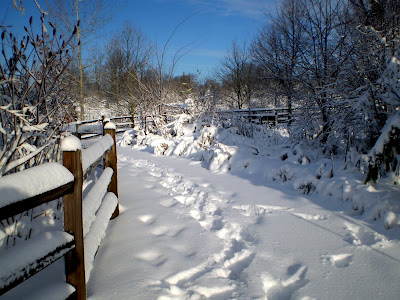 One must be careful at the Ditch. Plowing is not part of the experience. Neither is shoveling, though there are buckets for salt. Still, lovely it is... 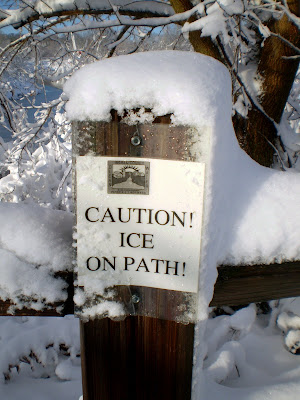 “Anne came dancing home in the purple winter twilight across the snowy places.” 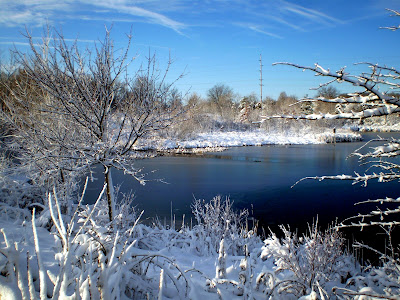 “In the nineteenth century, Fritjof Nansen wrote that skiing washes civilization clean from our minds by dint of its exhilarating physicality. By extension, I believe that snow helps strip away the things that don't matter. It leaves us thinking of little else but the greatness of nature, the place of our souls within it, and the dazzling whiteness that lies ahead.”
-- Charlie English 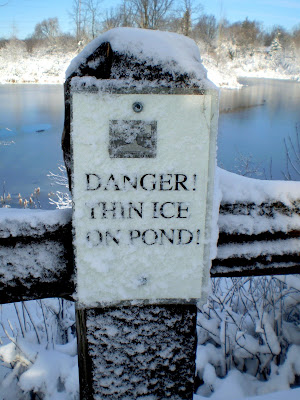 “A lot of people like snow. I find it to be an unnecessary freezing of water.”
-- Carl Reiner 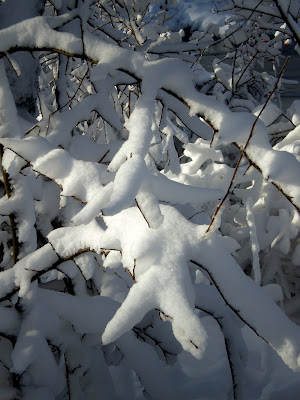 Personally, I prefer my ice in cubes. But you can't deny -- it's lovely! Let the caroling begin!
Posted by Jeanie at 2:35 PM

Ours is supposed to start about midnight tonight. All of your quotes make it feel a little less ominous.

I love the way snow transforms the world. Of course, by February, I am sick of it, but so it goes.

Looks like you got more of it than we did. Highs tomorrow are supposed to hit the mid-30s in your part of the world; hope that helps clear your roads.

Beautiful pictures, Jeanie. And I loved the literary accompaniments.

Beautiful photos, great quotes. It was beautiful this morning, but the streets were full of snow sludge by this afternoon.

just heard that it may snow here in Las Vegas tomorrow. You were smart in staying in Michigan..we don't handle snow well here.

A winter wonderland indeed! You've more snow than we do here in Canada. I esp. like the lake, the deep blue contrasting the frosty white. And I love all the quotes you've found, as well as your own words. Thanks for sharing with us what your neck of the woods is like... and that the aftermath of a storm can be so beautiful.

I don't like snow, but your photos are stunning. They actually make me want to go out into that cold and beautiful landscape!

Your snowy photos look beautiful! As long as it's just in a photo I like snow but I don't like dealing with it on a daily basis....I spent enough time doing that when I was younger.

Hey we have the same background - can't figure out why mine has the pink inner background though:)

I love the nsow too - it brings people out of their homes and into the streets in our neighborhood.

oh yes, the snow would make me want to carol. just beautiful and the quotes are perfect. a purring cat sits in my lap and i am having trouble typing.

jeanie - these are lovely and each a Christmas card in its own right. Just lovely. (easy for me to say, right? I didn't have to drive in it or shovel it). Hpe the Gyp is enjoying it, too!

LOOK are you Winter Wonderland, Jeanie! WOW... so much pure white, an sapphire sky...*sigh*... Love all the frosty-windowpane quotes--very fun for today! I live in the land of the far north, and I can't honestly say I love winter--oh, the irony! ;o) But there are is so much beauty in winter, just stopping, surrendering to the cold, and looking, taking all the glory in...not bad at all. Happy Weekend, my friend ((HUGS))

I'm jealous! I can't wait for snow. Sometimes we get a lot and sometimes very little... if any.

Such beautiful pictures and words. Lovely.

What a beautiful collection of pictures and quotes! We have not really had much snow yet - just a dusting pretty much. Those pictures make me almost look forward to our first snow fall! I love living downtown, but I will sort of miss the pretty road I lived along. Driving by the snow-covered trees was a nice start to my day. But there are trees close to where I live now, so I wlil still see them, just not as many!!

How FANTASTIC....altogether beautiful!!!
Thanks for sharing this
glittery sparkling goodness
(and my toes stayed warm!)
Blue sky and snow....stunning
work of art.
Hope you're cozy,
Jennifer

Well it is begining to look a lot like winter for sure!
Here in Florida the sun shines and warms the aching bones. I don't know what my woods back home look like. I return in a week.

Good morning, Jeanie. I love your blog best in the winter season. The world of snow, ice, and brilliant blue skies always thrills me. Your early pictures are a teasing glimpse of so much more to come.

A little snow to put you in the mood, Jeanie! I see you're shopping and decorating, too. Have a wonderful December full of good cheer.

Oh, where have I been? Truly - I seem to have lost a week somewhere. But here I am, lost in your winter wonderland.

We've finally had an inch of rain and turned cold - 40 degrees today! But our cold is raw and gray, with occasional streaks of gray. Gray water, gray sky. Your winter is so beautiful - even if it does have to be shoveled!

A lovely, lovely post that does more than anything in the stores, etc. to put me in the mood for Christmas!

your winter wonderland really speaks to me too...I can almost smell it and feel the purity and hush that snow brings with it

Wishing you and yours a continued joyful Christmastime along with very best wishes for a Happy and Healthy New Year!
oxo