More Fun in the Kitchen!

I'm getting into this "cooking from my books" thing.

Imagine a wonderful, low key weekend where you actually feel good enough to meet with friends and play and you have the time to do it! For me, part of that play time is in the kitchen.

Our dinner on Saturday was a delicious chicken tikka masala with cucumber raita. I can take no creative or cookbook credit for the chicken -- it is a spice mixture from a Canadian company called Arvinda's. My friend Suzanne gave me some for Christmas several years ago, and again, upon request. The recipe involves marinating chicken in a yogurt/Arvinda's mixture, then cooking onions and adding the chicken -- a quick saute till the chicken is cooked; then serve over rice. (Sorry, not pix -- we were too hungry. I think I'm a bad cooking blogger.)

The last time we went to an Indian restaurant, on of my favorite dishes was a creamed spinach. I liked the flavors with the hot food and looked for a recipe. 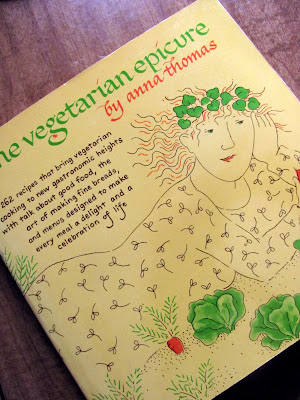 I found one I liked in "The Vegetarian Epicure," an old favorite I've had since the 1980s. It wasn't creamed spinach, but Spinach Provencale, with Parmesan cheese. 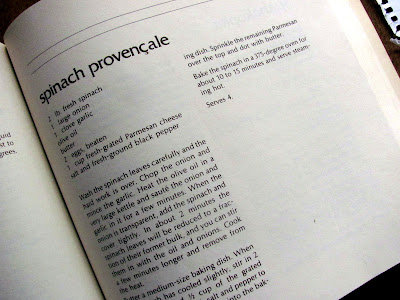 It was fast (browning onions and garlic, adding bunches of spinach to wilt down, then folding in an egg white and grated parmesan mixture, topping with more parm and baking for about 15 minutes at 375. And it was divine. We gave it an "A." Served up with clementine sections for dessert, it was simply a perfect dinner for a cold night. 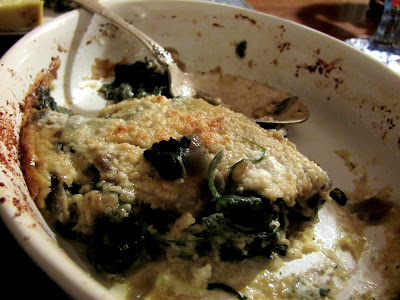 On Sunday, we decided to make scallops -- Rich had purchased some the last time we were at Trader Joe's. I went on a recipe hunt and found on the the Collage cookbook.

This is one of a series from the Junior League of Denver, and as with most Junior League cookbooks, I've never been disappointed. 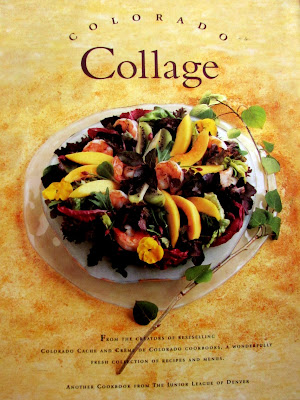 (A note about Junior League cookbooks -- a million lifetimes ago I was in Junior League and during my five years with that group we did a cookbook. Everyone had to submit recipes; each recipe had to be tested multiple times. In our case, it had to be prepared by at least three different cooks and served to groups of (I think) at least eight people, who had to rank it. It was a very fun year -- every meeting we ever went to had wonderful food! I suspect most Leagues work this way. By the time the recipe makes it into print, you can pretty much count on it being worth your while.)

Here's the photo in the book. 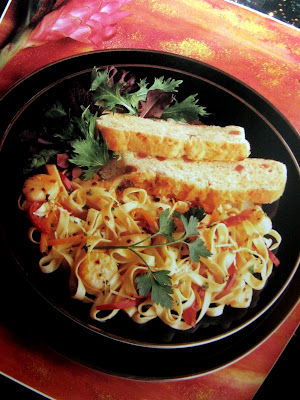 I'd like to show you what ours look liked, but being the bad blogger that I am, I forgot my camera -- and in any case, probably would have devoured it before I remembered. I really need to improve on that! (That said, it looked like the photo, except we just had yellow peppers, which made it a tad more monochromatic.)

It's basically a mix of white wine, chicken stock, lemon juice, with onion, red pepper and garlic, sauteed. Then add the scallops for a couple of minutes and serve over fettucine (we had spaghetti; it was fine.)

We gave it an A-. It was easy, fast, fresh-tasting and very light. But we've had better pastas -- the A list. That said, we would definitely make it again. I would add a bit more lemon, perhaps a bit more of the red pepper flakes. And really, an A- isn't that bad!

I also had some leftover ricotta cheese and had been looking for a good recipe to use it up. I found a refreshing dessert in Martha Stewart's Everyday Food magazine. (This is another where the recipes almost always work.) It was in the January "Light" issue. 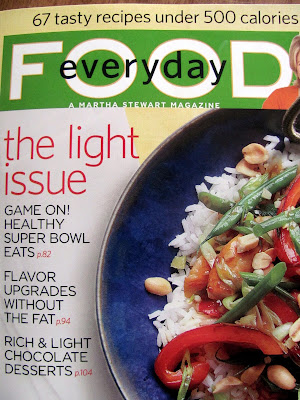 The ricotta mousse was easy to make, just combining ingredients in a blender. You need to chill for at least three hours, so hold that thought in check. 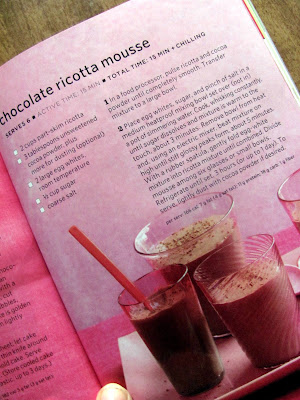 It was relatively easy -- just combine your ricotta and cocoa powder till smooth; then mix egg whites and sugar over simmering water till the sugar dissolves and it cooks. Then whip the egg white mixture stiff and combine. Not bad at all. 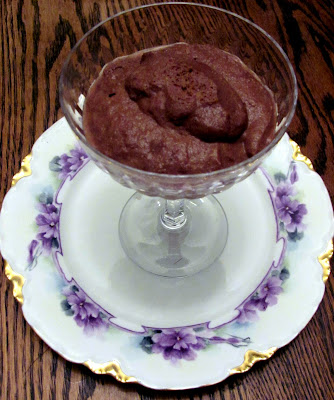 And it was pretty, especially with the whipped cream. But we gave it a B-. It was quite chocolatey, but it seemed grainy to the palate. It's possible I didn't whip it smoothly enough, but it also may just be the consistency of the ricotta. While I wouldn't toss the recipe (it was very light, 167 calories, which was a plus), I have other mousse recipes that are silkier. 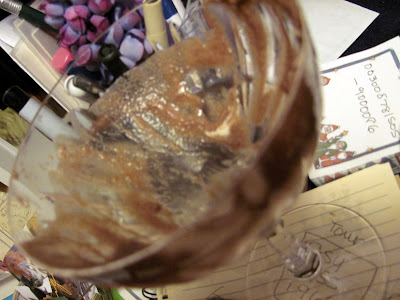 That said, I didn't leave much in the dish!

(Time to read, too! There's a look at Anne Perry's "No Graves As Yet" on Chopsticks and String!)
Posted by Jeanie at 10:30 AM

Everything sounded delicious to me, especially the Spinach Provencale, with Parmesan cheese and the scallops with linguine.

I have a hard time with food blogging too. It's harder than it looks. I've make one recipe a couple of times that I want to share, but I forgot to take pics one time and just wanted to get it made fast the second time. So no pics.

Now I am really hungry and it is a joy to see cooking through someone else's eyes and words. Your violet china saucer is so pretty! Great engaging post! <3

Oh yum! I have read about Arvinda's spices on a vegan blog I read. I have been tempted to buy some... I probably should! :)

Looks like lots of good eats are being consumed in your kitchen these days! I have barely cooked lately (well, besides all the aps for the party last week) but when I get back from France I plan on hunkering down and doing way more cooking!

This is such a delicious post that now I feel the need to head to the kitchen....and that NEVER happens!

Yum! I am going to try that spinach recipe.

Wow! You really did some great cooking. I love Chicken Tikka Masala. How fun! I need to get in the kitchen very soon and do something. Tonight I will make a new batch of scones for the freezer, some yogurt, and a lovely Caesar Salad. That's it for today.

mmmm.... it all sounds so wonderful! Anna Thomas was my first kitchen guide, and her books are still my favorites. I always liked the way she married story, travelogue, and history in with her recipes -- made me feel like a better person for having cooked with her. Did you know that she is also a screenwriter? Co-wrote El Norte and Mi Familia with her husband, the director Gregory Nava. Lovely post -- thanks!

You've been quite busy. You are inspiring me. I am very interested in the spinach recipe.

The chicken had my attention until you described the spinach. I want that recipe. OMG, that sounds sooooo good.