Comfort Food - and a Personal Challenge

I don't think of comfort food much in the summer. Certainly there are summer-oriented foods that speak to that topic (ice cream, for one), but I usually think of it when it's cold, snowy, dreary -- and when I really want to nest and smell wonderful things coming from my kitchen. 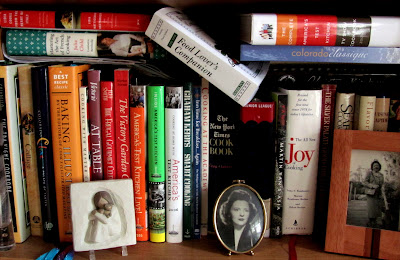 Hold that thought as I go on the tangent of mentioning that I have a nice cookbook collection (if rather shabbily displayed). It covers a good three shelves of my five-shelf case and the other two have boxes of cooking magazines (and yes, I have used them). 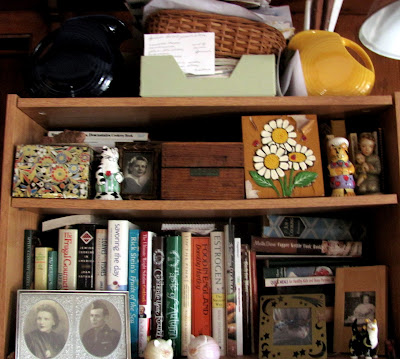 It is a paltry collection compared to my friend Jane's (which tops 700) and bigger than Rick's (which I think is under 10). 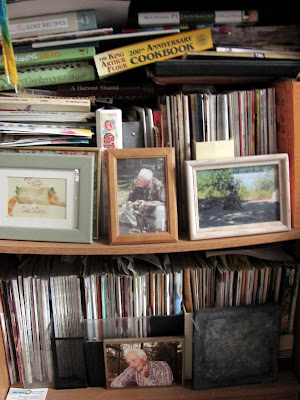 But I don't use any of them often enough.

I've made this vow before but never stuck to it so again I decided to cook at least one new dish a month from my collection. It's a win-win situation -- you've gotta eat, and at least you feel like those books on the shelf have purpose!

On January 1, I made lasagna from the America's Test Kitchen compendium. 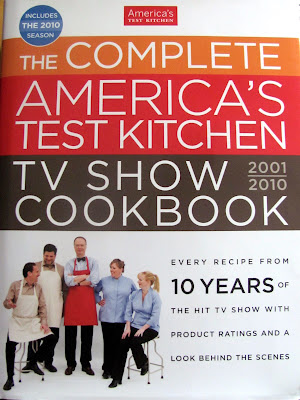 Well, let me rephrase that. Since I had pneumonia, Rick did the food handling and he made his own sauce. (And to be specific, we actually made it New Year's Eve to serve in the first) But we made the ricotta mixture from the book. It was indeed delicious and a big hit with my wino friends, aka Cork Poppers (see labels for related posts on wine). 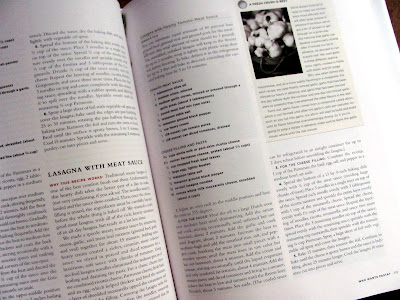 You might say after a wine tasting most anything would taste delicious. You would be right -- but this was just as good for company the day after! (I have to admit, this is one of my favorite "go-to" cookbooks -- all the ATK books are. The recipes have never failed.)

Well, I exceeded my once-a-month goal! A week ago I made Ina Garten's pot pie from Barefoot Contessa: Family Style. Here's the recipe. 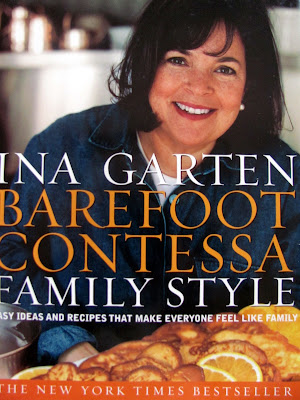 Well, pretty much. I also (pretty much) made her chicken stock. 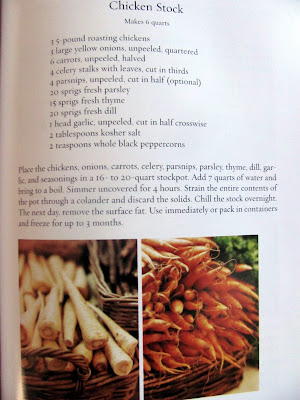 Stock first, since it's so important. I had a carcass leftover, worth boiling up. The recipe is probably the typical stock recipe -- only I only had a carcass, not the whole chicken she used. And I didn't have parsnips. Still, it was a good and delicious recipe. She may use a tad more salt than I would next time, but it did have wonderful flavor.

Then came the pot pie. Which she doesn't call pot pie. It's "Chicken Stew with Biscuits." 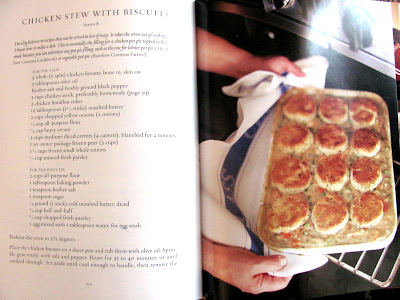 Isn't her photo lovely? I didn't take a photo of mine, not because it was ugly but because we were so hungry by then, we barely let it rest before digging in. Oh, and it didn't look like that, either.

This is an excellent recipe and I'll definitely make it again. I found it in the book when I decided to read it cover to cover, being an Ina Garten fan. I like her style; the recipes I've tried or have had elsewhere by her always are delicious. In fact, I got on the pot pie kick because while I was sick I saw a rerun where she made her taste-tester husband Jeffrey a lobster pot pie. (Personally, I think Jeffrey Garten is the cutest thing ever; I love watching them together!) Out of my budget, but then pot pie was on the brain. 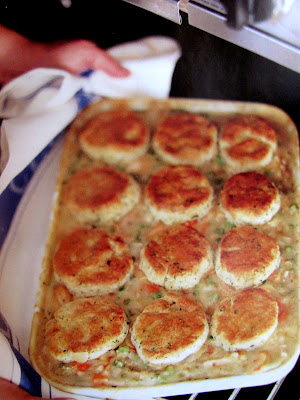 As I was reading the recipe, she said it was her lobster pot pie recipe with chicken (and biscuits on top). Sounded good.

My version added mushrooms and I didn't do the biscuit thing because no one wanted my sick and grubby little fingers messing with dough and frankly, I had enough energy to do one dish, not two. So, thank you Pillsbury pie crust.

That said, it was fabulous! And in my deep pie dish, it made enough so I can make a small one for the freezer.

I just wish I could have smelled it -- Rick said it smelled really good. 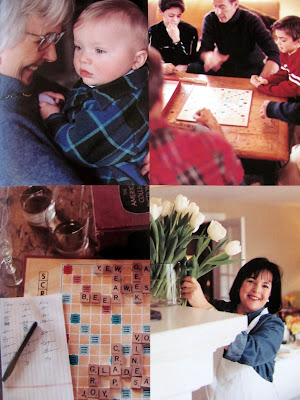 My quick review of the book: Well written with fun tidbits and delicious sounding recipes. Ina has a party and entertaining flair and the prefaces to sections point this out -- she knows family food can be different from more formal dishes, but it doesn't have to be boring. The photos are real stunners -- I wanted to eat everything off every page. She also includes menus combining the various dishes, which is a nice touch.

Another thing I liked about it were two spreads at the back -- one was Ina's favorite kitchen tools... 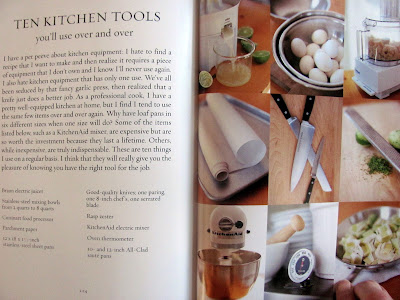 The other is ingredients she can't do without in the kitchen. 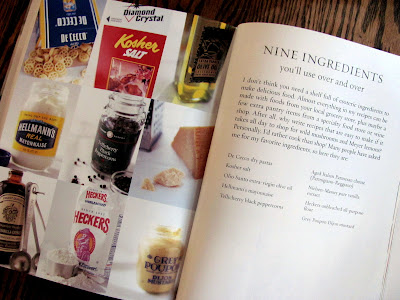 These pages led me to thinking about my personal pantry favorites -- but that's for another post!

I got this book for $3 at a yard sale; I fear you won't be able to find it at such a price. But it's definitely worth adding to the collection -- at least so far!

Speaking of books, I've finally had a chance to post some book notes on Chopsticks and Strings, so if you haven't stopped by for awhile, take a look.
Posted by Jeanie at 4:39 PM

I love to look at people's cookbook collections. I think it says a lot about someone. Barefoot Contessa is a favorite here, too. I also love Nigela Lawson. Loved this post and I particularly love that you have personal pictures scattered in amongst your books. Lovely.

What fun! I love your collection, and I love the look of those pot pies you made ... could inspire me to investigate my own collection for comfort food candidates. Sure is the season. Hope you're enjoying great food and the best of company this weekend...

I have a lot of cookbooks and love looking through them but, as anyone who knows me can tell you, I hate to cook! I'm not even much of an eater. I'll just grab whatever is in the fridge and can eat the same thing every day....but I think I secretly dream of being Julia Childs or Ina Garten!!

Your pot pie sounds delicious. I'm sure HB would love it if he had someone to cook it for him!

I was thinking about my cookbooks when I read this. I've stopped buying them because I seldom use them when cooking. I think I will try to take your challenge and make one new thing from a cookbook once a month. I can do this.

Even though I just came home from eating sushi, you have made me hungry! I love my cookbooks, but I find that I generally turn to one of two - either Southern Living's Ultimate Cookbook or the big Gourmet cookbook that came out about 4 or 5 years ago. Oh, and I have made Ina's chicken pot pie (not with biscuits, this was actually pot pie) off the Food Network site, and it was yummy. My favorite comfort food!

I can't believe it. I have chicken, celery, carrots, onion and biscuits in the refrigerator because I've had a hankering for - chicken pot pie!
We used to do it with dumplings, which really are drop biscuits, and then I got into the pie crust bit, and this time I was going to use biscuits in a roll.

You've inspired me. Instead of "winging it", I'll find a recipe and follow it. What a concept.

I have very few cookbooks - I think less than 10? I rarely buy them but i enjoy cooking so I really should invest in some! I got 2 gluten free ones for Christmas, though, so my collection is expanding!

I really want an Ina Garten one, though, as I love her show! So maybe I will treat myself to one for my birthday! I also love her & Jeffrey's relationship. They are SO in love!

I LOVE Ina and
Tivo all of her
new shows. Her
recipes are always
wonderful, too!
Although, not exactly
low-cal fare : )
I could live in that
new barn that they
had built for her
show!!
xx Suzanne

I think one recipe a month sounds like a good goal. I did two near the beginning of Jan, must be time to do another.

What is it about so many white foods being comfort foods ;)

Good thing I stopped by to visit on a full stomach or I would be HUNGRY!

Can't help but notice with the internet that it is so easy to get a recipe...my treasured books are gathering dust on the shelf

Love cookbooks and have quite a collection, but I don't think I have Ina Garten. I love seeing pantry favorites and tools for the kitchen too. I very much enjoyed this post, please post more from your cookbook collection. Now I am hungry for Chicken Pot Pie. I also don't use my collection of cookbooks often enough.

I've never been into cooking much, but have a similar goal - at least one new dish a month. And America's Test Kitchen tops my list! My collection is in the "under 10" category, so I shouldn't have too much trouble finding a recipe to try!

I've too many cookbooks. Keep telling myself that I need to go through and get rid of some, but it seems almost a sin to do so! Kudos to you for using yours!