I still miss him -- and sometimes it's still hard.

But the dad who died then wasn't the dad I knew, the one who raised me, loved me, played with me. The one who went out of his way to make Santa real, building a nasty metal dollhouse in the middle of the night so it would be there on Christmas. 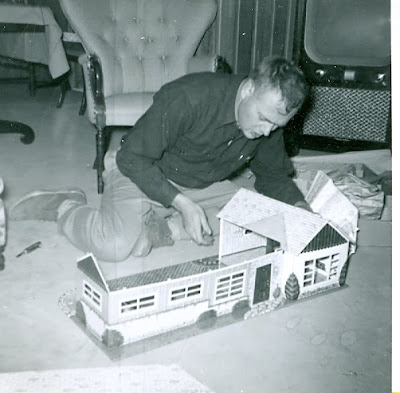 He wasn't the one who sat and watched MSU sports with me on TV -- or for that matter, cartoons, parades, or Dick Van Dyke. 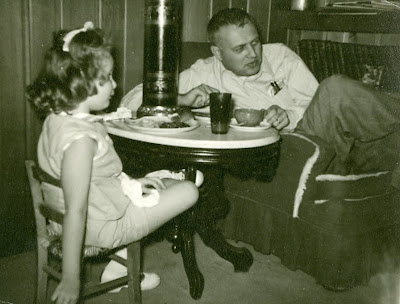 He didn't go to the beach anymore -- even trips to the lake became difficult for him. 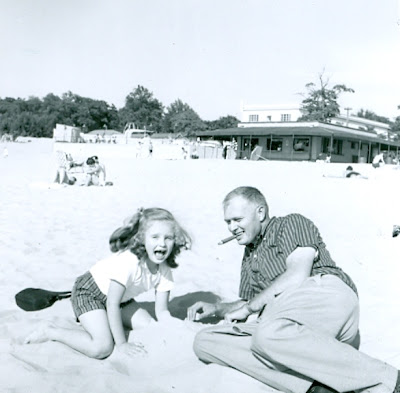 The cottage he loved had become a challenging place, with its unpredictable climate. And on one of our last trips, when we stopped at a rest area accessible from both directions, he came out the wrong side and couldn't find me. He was terrified. I wasn't used to seeing Dad terrified. 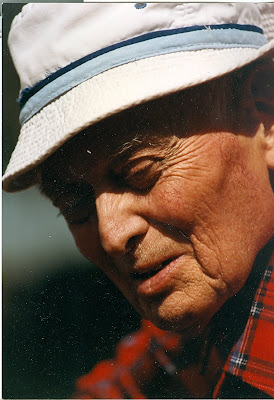 The dad who left on that cold December day so long ago wasn't the one who was fun at the holiday table. 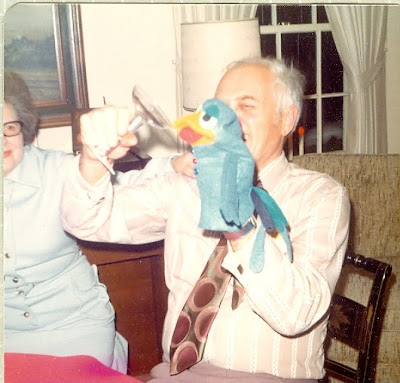 And he wasn't the one who happily bombed around in his little red Tempo -- I drove that car for several years after he died and I had totaled my station wagon. By the time I got it, it was a dicey little car, but he loved it to pieces, and even when he couldn't drive, had no intentions of letting it go! 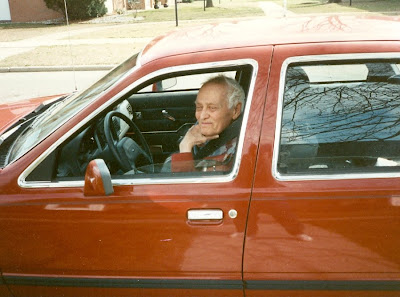 I remember the thoughtful and creative things my dad did for people -- like making this gingerbread man into which he stuffed some earrings for my mom on Christmas. During that period we had an "original gift wrapping" competition. Mom had been making gingerbread strings like a crazy lady with a smaller version of this guy. He stands atop one of my trees. 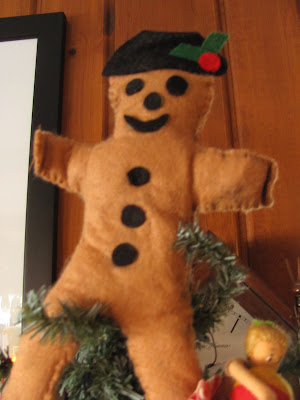 I remember my dad loving his ham radio and teaching me Morse code before I knew the alphabet -- I wish I could remember it. (His ham radio kept him in touch with friends even during his hardest times while he was still living independently.) 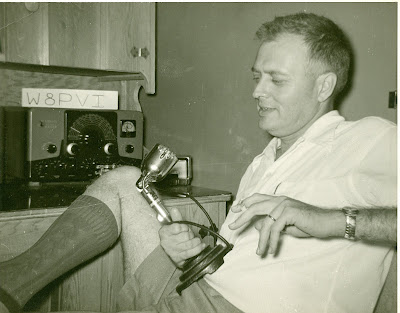 I remember the stories people told me at the funeral home, most touched by our first African American neighbor who said my dad was the first person who came to their door to welcome them. And others, who told me about kind things he done for them. 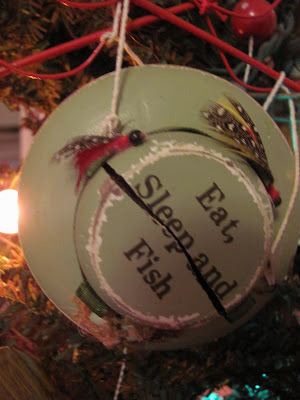 I remember my dad as a fisherman on our lake, often capturing big bass. 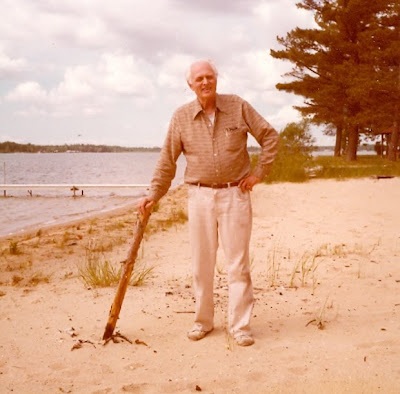 The small tree in my bedroom -- my "Dad Tree" -- focuses most on this part of his life. 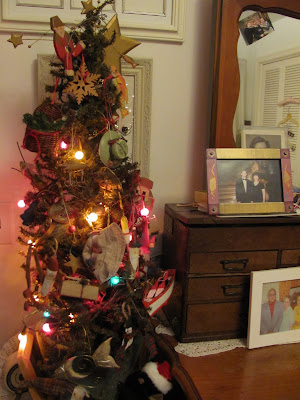 Those later years were really hard -- and they were hard for us both. More nights than not included a stop at dad's apartment on my way home from work with a prescription or to help him with dinner. His attitude changed -- he was anxious, nervous, and (with some good reason) became a hypochondriac. After he accidentally overdosed his medication, he began taking copious notes on every moment of his day. They were so sad, I couldn't keep them after he died. 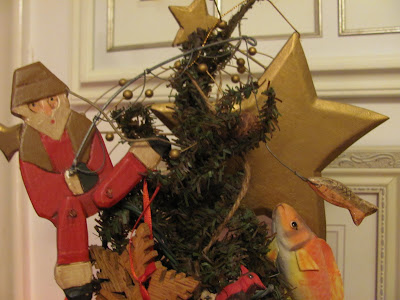 He wasn't the guy I want to remember. 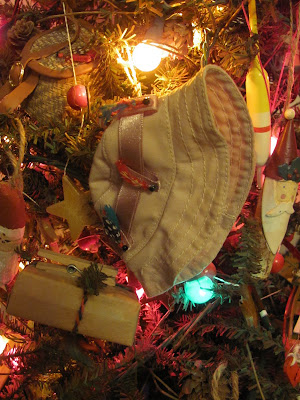 My heart goes out to others who are dealing with aging parents who have become more challenging. Face it, we're all going to become "more challenging" as we age, as our bodies go head to head with chronic or catastrophic illness, or even just a bad spell. We'll needier, emotionally and physically, and perhaps for even daily needs like getting to appointments. 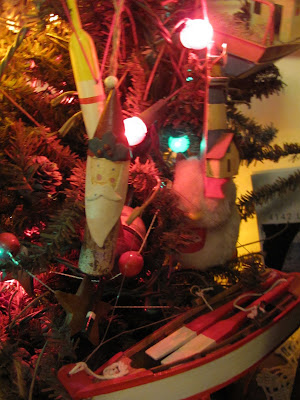 And it's hard to be the caretaker. I think they all deserve medals. I know I did -- and I know I couldn't have done it without the selfless help of friends who wrapped themselves around me and my dad and helped us through, listened to us, were there.

I'll always miss you, Dad. As much as I want to, I can't forget those tough times, although I remember the others with far more fondness. But you and mom taught me well. And I won't forget that. 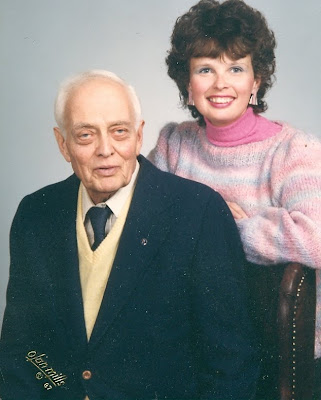 Thinking of you on the anniversary of your father's passing... So tough to watch someone slip away like that. My mom's father slowly passed away over the course of many years due to a stroke. I sadly do not remember him as the man that my mom knew and loved. I of course loved my grandpa, but I don't have any memories of him being healthy as he had a stroke when I was in elementary school so the bulk of my memories are of him struggling to speak and communicate... But I am glad my mom has stories to tell to keep his memory alive.

What a beautiful tribute, Jeanie. You did a wonderful job of bringing your dad to life for us. It's so hard to watch a loved one lose ground until they no longer resemble who they were. Keeping you in my thoughts today.

I've said it before, dear friend, and I'll say it again. I wish I could have met your parents, but how fortunate I am to call their daughter my 'sister.' They sound like such wonderful people! So much of all that is beautiful and creative about them lives on through you. Huge hugs and lots of ove on this day of remembering. xoxo

Jeanie what a lovely post about your Dad. It made me so nostalgic for my Dad. He passed away on December 23 during the holiday season I love so much. And What a FABULOUS idea your "Dad" tree is. I thin I will steal that idea and create my own Dad tree with the bits and pieces from my collection of Dad things. You have inspired me once again my friend.

This is such a beautiful tribute to your dad. You're so lucky to have had such a wonderful dad. I don't have those same fond memories of my dad.

I love the idea of the dad tree.
This is a lovely tribute !!!
Thank you for sharing!

Your love can be felt in this post about your dad. Luckily, there were so many good memories before his decline.

what a beautiful tribute....and the old photos are just priceless !!!

A lovely and loving tribute. I especially miss my parents at holiday time and know the feeling. Sending cyber-hugs, virtual tea, and real affection.

Your memories are really beautiful, and your photos make them come alive. Coincidence: today would have been my father's 105th birthday.

Your pictures are so wonderful and your love for your dad really shines through in all that you wrote about him.
My parents both died when I was 18 when they were younger than I am now. I still miss them and wonder what those "aging" years would have been for them.

A very loving memorial to your dad. He must have been a very special guy. I love that you honor him with the tree too. If only everyone could have a dad like your dad. Very special!

Yes, a beautiful tribute. Your dad was remarkable! And you seem to have inherited so much of him! You sparkle with love!

I visited all your interesting posts. Great photos of Chicago. You know how I like vintage postcards so looking at your Thanksgiving cards was a treat. Your tribute to your dad was very loving. My dad passed away in 1974 – so long ago and so early for me that I did not ask him many things. Time marches on so quickly for all of us.

Jeanie, thank you for sharing all these memories - the painful and the wonderful ones. Caring for our parents can be difficult, but rewarding. It's so hard to see the kinds of changes that age sometimes brings.

I'm glad you have so many happy memories of your dad - that helps :)

What a touching post! Your dad was a good-looking man, and I love that little tree - a wonderful way to honor him.

What a thoughtful post and it is a challenge hanging onto the good memories when it's tough going. I think the Dad tree is a lovely thought. Take care.