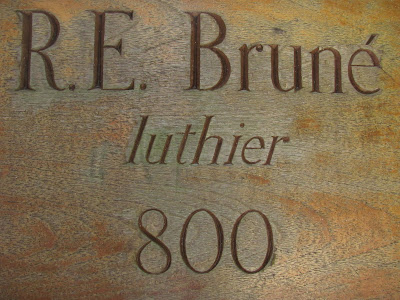 So, when Rick and I headed toward Minneapolis last weekend for a family funeral, we made a stop at Evanston, IL., where Richard Brune's studio/showroom/workshop is so that Richard could "give the guitar a little love." 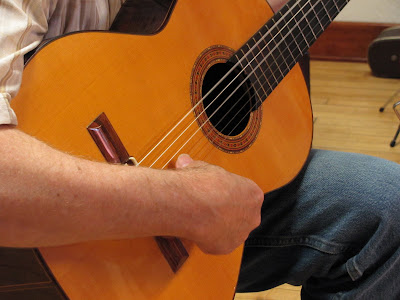 Rick's a pretty good guitarist. When the instrument went into Richard's hands, it began to really sing. 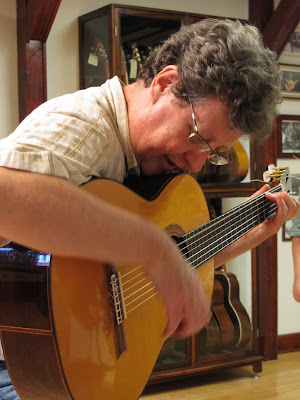 I have to say, I felt very privileged to meet Richard and to see his workshops and guitars. Not everyone has a letter from Andres Segovia on their wall or a recommendation from the master on his website saying "I promise to play your guitar daily and give you an account from time to time as to how it is evolving. Thank you and I send you a strong embrace." 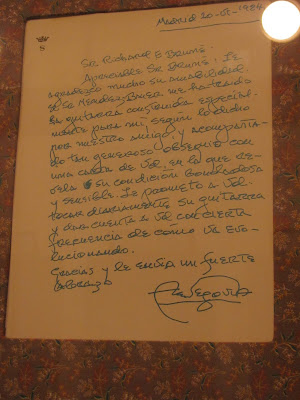 It's no accident that the guitar was at home in the hands of its maker. Brune started building guitars in 1966 and played flamenco guitar professionally in Mexico in the 1960s and '70s. 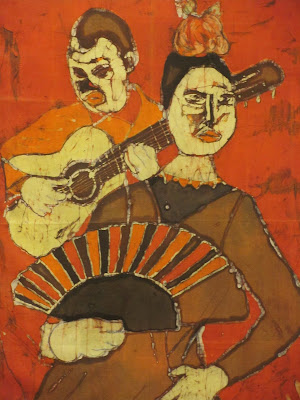 He later moved to Chicago and began crafting this beautiful instrument full time. 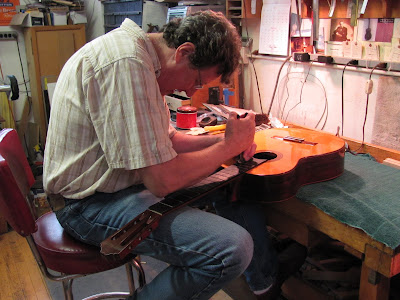 His workshop is tucked into a quiet neighborhood in Evanston, home to Northwestern University. 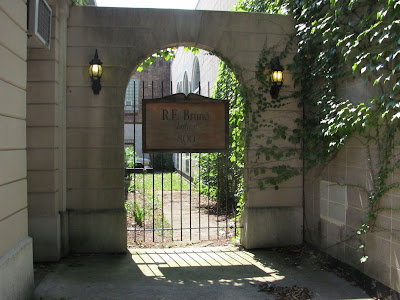 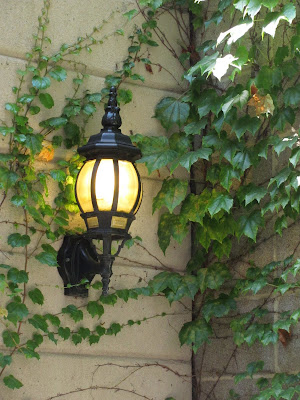 It's a stucco, hacienda-style building. The interior has white walls, graceful arches, beautiful lighting and case upon case of guitars. Despite the hot and humid weather outside, inside the studio it was a cool, relaxing haven, and while the music made in that room is full of energy, the overall feeling is one of divine calm. 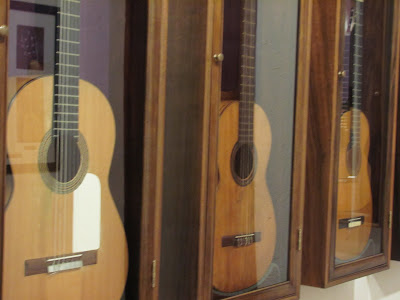 All of his guitars are beautiful. Some are simply amazing. Those of you who have worked with paper know how demanding it can be. Look at the rosette on this guitar. 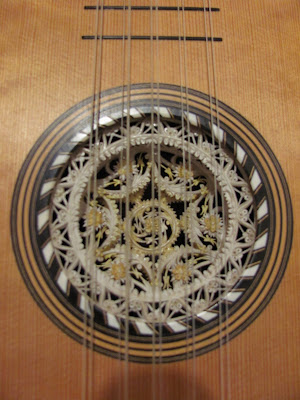 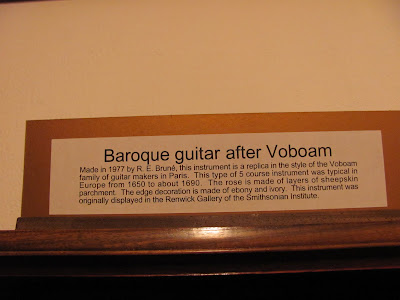 It's made from sheepskin parchment and the detail is so stunning I simply couldn't believe it. 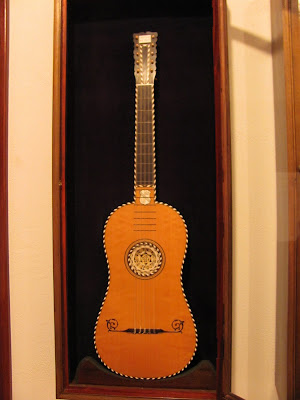 Richard's son Marshall is also a luthier and I couldn't help but think what pleasure a father would feel for a son following in such footsteps and with such skill. He showed us one of his guitars and the workmanship and design was truly remarkable. 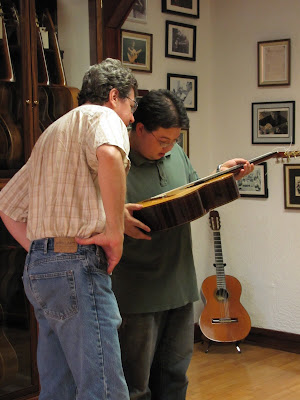 Well, while the guys were talking guitars and Rick was trying out some others, I took a few minutes to walk around the neighborhood. I'll show you what I found next time. But let me say, I returned to the studio to find them in the workshop. 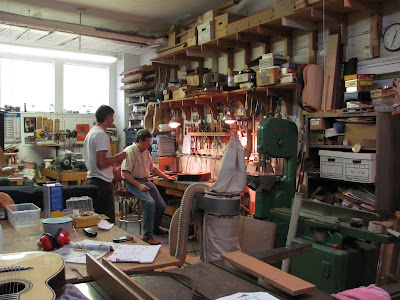 Now, I'm a sucker for workshops or art rooms of any kind. But really captured me was "guitars in progress."

My brain knows they don't show up at the guitar store looking like those you've seen above. But to see things like this... 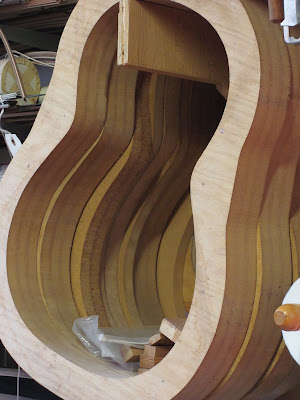 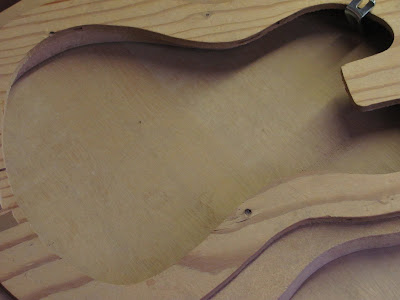 ...really break it down to the basics. 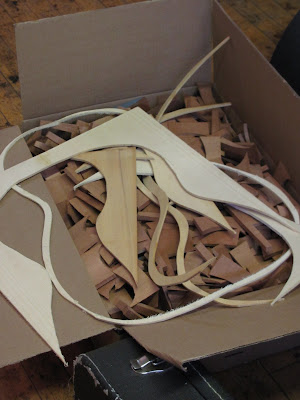 I confess, I've developed a real love for classical guitar music since knowing Rick. But after visiting Richard, I have discovered a deep respect for the artistry that goes into creating the instrument. 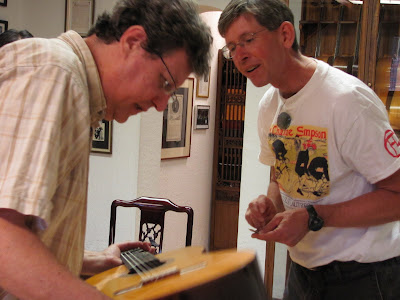 Richard graciously gave Rick's guitar the love it needed and when we picked it up, well -- it sounded fabulous. 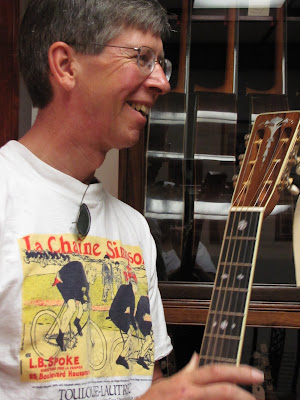 I can see why -- it's not just the guitarist or the instrument -- it's the craft, imagination, skill and grace that goes into creating that instrument in the first place. Not a duo. A trio. 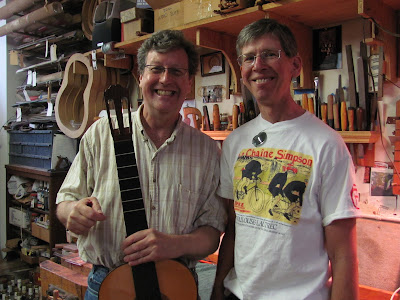 Wow. Fine craftsmanship is a beautiful and rare thing. As always, the photos add so much to the story.

Very fascinating information. It's hard to grasp how many craftworkers still improve the overall lives of everyone.

such a fascinating post Jeanie, enjoyed every word and perfect photo too!

I am going to make sure Mr Magpie sees it as well ...

I really enjoyed reading this blog, it's a fantastic insight into the craftmanship that goes into making such beautiful guitars.

Wow...very interesting. Thanks for all the great information. I never know!!!

Have a fun weekend.

Artistry in any shape or manner is always a pleasure to see.

Makes me think there is not much distance between artisan and artist -- sounds like an extraordinary experience. Hope you are home now, and settling into the calm of late summer.

Jeanie, what a captivating post. I was totally enchanted. I'm sending the link to a guitarist named Rick Flores. He is the guitar instructor at my former place of work and teaches and performs around the Bay Area. I'm guessing that he would find this very interesting to read.

Guitars are elegant creatures, and it is truly a master craftsman who can make one sing. My brother in law buys old and ruined guitars and rebuilds them. I'm always astounded at this artform and the details - even more in awe of the musicians who can make these creatures sing.... I love classical guitar. Thanks for the fascinating review.

I Love Guitars. My brother is an awesome guitar player. I love to hear all the guitars he has when he plays them. I am sure that was so fascinating to see and listen to such an amazing musician.
xoxoxoxo

how wonderful to hear about this shop, artist and the wonderful letter on his wall. It really can be a joy to meet the maker of ones instrument!

In think these type of posts are my favourite as they let me see something entirely new. The workshop is fab and not anything I would have thought of before.

So beautifully written and I enjoyed seeing all the photos of the guitars in various stages. Hard to comprehend the skill required to take raw wood and materials to such a level of craftsmanship!

Wonderful photos! Amazing how much goes into making an instrument. xo