Back from the Beach!

Vacation. I think it's one of the nicest words in the English language -- and I'm sure that whatever the word is in other languages, it still brings about the same feelings. Freedom. Joy. Relaxation. Fun. 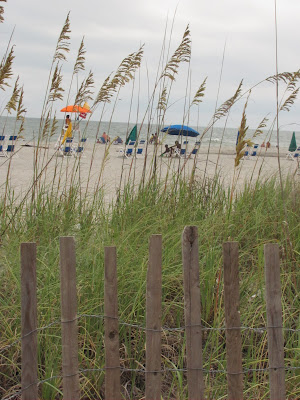 And mine was all that!

I'll cover some territory over the next few posts, including visits to Myrtle Beach, South Carolina and the area near Boone, North Carolina. We'll visit some great spots -- good antique stores, the Virgina Creeper Trail, and the wonderful Mast General Store. 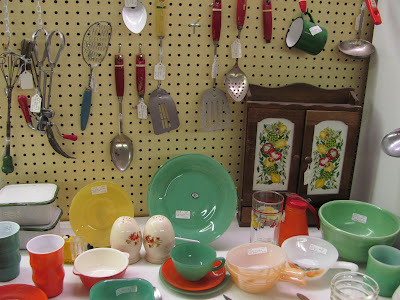 We started our trip with a visit to my Cleveland cousins and dinner at a great restaurant in Chagrin Falls, appropriately named Rick's Cafe! (Rick liked that!) 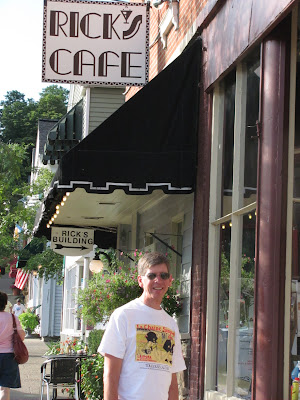 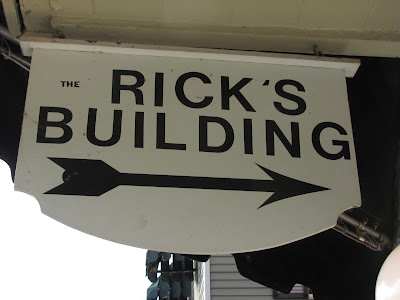 Then back to the house for a cheese cake made by Ms. Jaime, my cousin (second cousin? -- my cousin's son's girlfriend.) It was a butterscotch cheese cake and to die for! 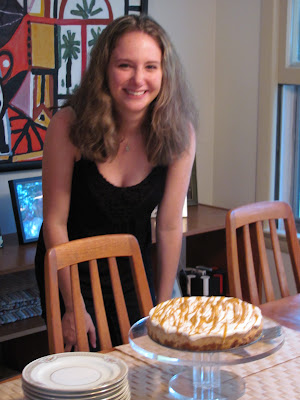 Then off early the next morning for Myrtle Beach. Located on the Atlantic Ocean in South Carolina, Myrtle Beach has seen its share of hurricanes in its time. I thought one was coming the morning I was going to go to the beach. 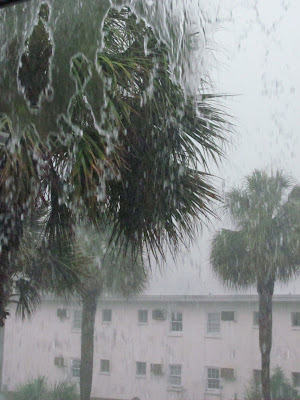 Let's just say the closest I got to the beach that morning was to watch the raindrops fall into the swimming pool at our hotel! 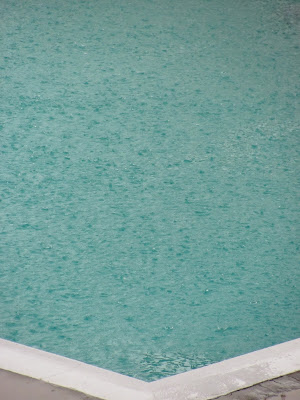 The reason we were at Myrtle was for Rick's annual trade show. I helped on the floor (and am pleased to say things went well for him!). 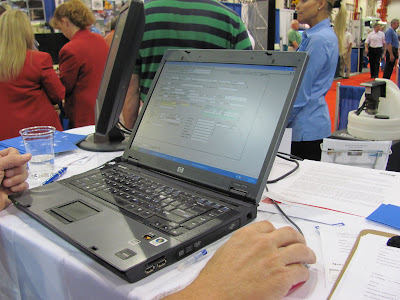 But after the show, I did get in some beach time. 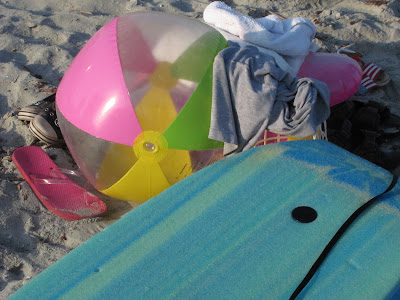 I just love the surf and playing in the ocean waves is truly an experience for this girl from the Great Lakes (and I don't even get there all that often!). The ocean at its calmest is livelier and rougher than our little Otsego Lake! 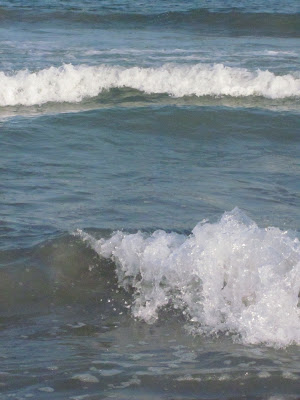 And we did get to one of our favorite restaurants, The Red Parrot, which overlooks the beach. 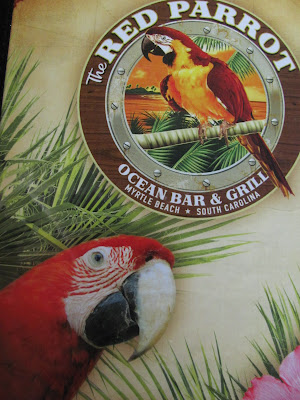 Yes, I bought a t-shirt. And yes, as you can see by my hair, my hair was continually wet. And when it dried it got very -- shall we say, big? 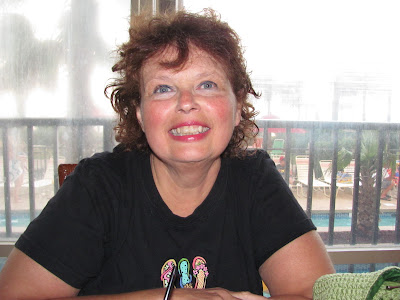 I hated to say goodbye to the beach, to the beautiful flowers that were everywhere, and to our crashing waves. We were there for two days, then off toward North Carolina. 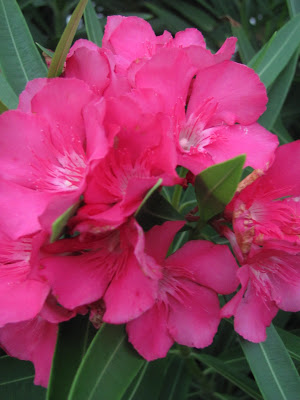 And we made plenty of stops! 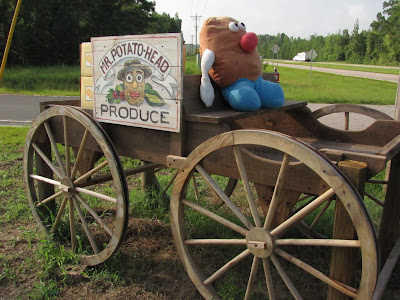 The first was at a fruit stand, where I bought the most awesome peaches of all time (OK, I know -- I'm sounding like a teenager, but truly -- they were amazing!) 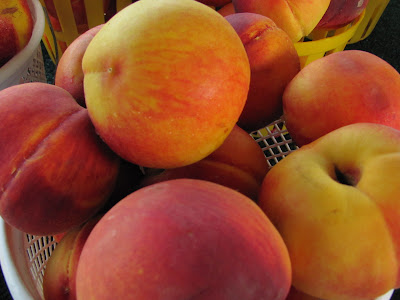 Then we had lunch in Columbia at Doc's Barbecue with my friends from NETA, one of our TV station's associations (and the distributor of our WKAR-produced series "BackStage Pass," coming soon to a TV station near you, I hope!) 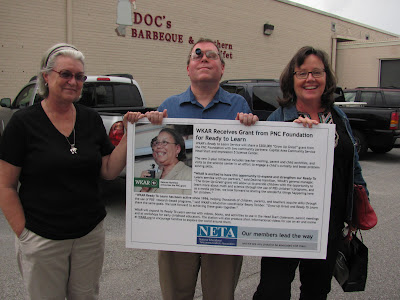 This is such a wonderful, authentic BBQ restaurant with fabulous food. The wall boasts visits by George Bush (the younger) and Hilary Clinton and I bet they were as satisfied as we were! 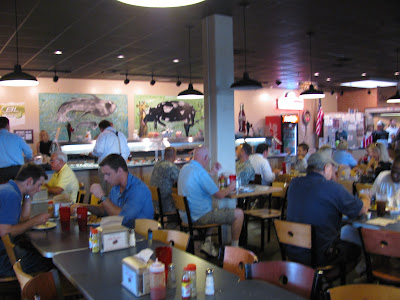 Then it was off to another town where Rick met with a customer. (I made great headway knitting a purse and finished a book while he was there.) The off again to Banner Elk and Sugar Mountain, where we would spend the next few days.

What a great trip you had! I love the pics.... keep em coming.

Such wonderful photos, sounds like your summer is going well. I'm excited to catch up on your other posts. I've have not read or posted a blog in over a month and am having so much fun getting back at it today!

What a lovely vacation except for the rain. Looks like you had lots of fun and relaxation. I really like the name of your blog-so fitting for a kitty.

It's great reading the post and going through the photos. Travel through your computer. I think I love the Hurricane pictures the best just for atmosphere but they are all great and make me want to go there. Glad it went well and pictures of the knitting would be good.

That sounds like a wonderful trip. I love waves!

"I must go down to the beach again..." There is something so soothing about the beach, such a good place to be.

Those peaches look delicious. We've had some of the best ever this summer.

You're so right about the word vacation meaning freedom and joy. Some of my best memories are of our vacations.

Crazy storm, gorgeous waves, fabulous peaches, what a wonderful couple of days! And great that Rick did well at the show too.

You lucky thing you ... first the beach and then the mountains!

What a great time you had on your vacation. So glad you got to go to the beach and swim. It was so hard going to the gulf and not being able to get in the water. You look Great in the picture! Vacations are truly wonderful!
xoxoxo