We haven't had a wine tasting gathering for a long while. Oh, we tried -- but getting eleven people's schedule's in synch during the summer is anything but easy. We Cork Poppers are a busy bunch! 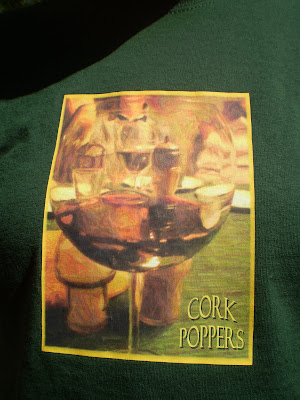 So, last Sunday afternoon, we gathered at Rick's to celebrate French Bistro wines, with our wine group. 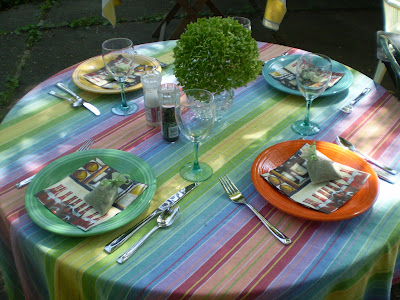 We turned Rick's patio into Le Cafe du Vin, an outdoor cafe, with our tasting area -- a circle of chairs around a feast of fabulous cheeses, crackers, bread and snacks! 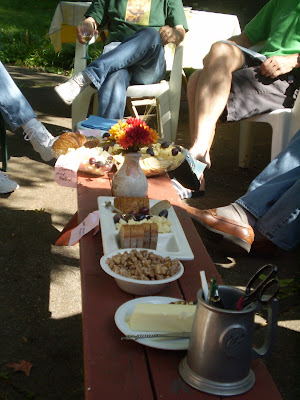 I pulled together a few of my photos from France (which was why we chose this particular theme!) and mounted them. And our wine expert Dick chose a delicious selection for our tasting. I do love tasting! 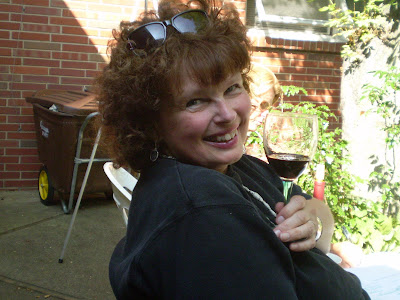 The first was a 2006 Chardonnay by Georges Dubouef called Macon Villages, which was from the village of Macon in the Burgundy region of France. 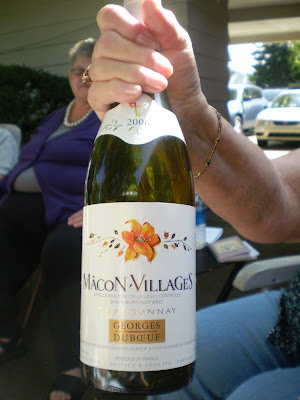 Aged in cement casks, it was a lovely white wine, that was crisp, gently sweet, and a bit fruity. At $14.39/bottle, it was a fair deal.

And, as Barb always says about the first one, "It's the best so far!" 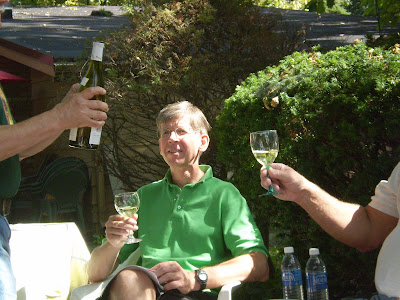 Next up we enjoyed an other Georges Dubouef, a Pouilly-Fyisse Chardonnay, also 2006. 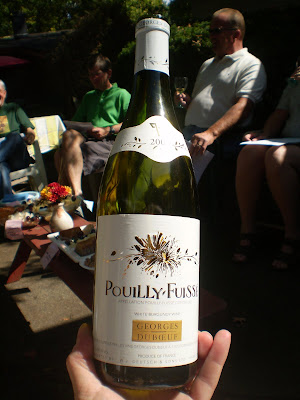 We learned for these wines, 2006 was a very good year! It was dry, rich, less fruity and quite delicious. This was the top level of chardonnay from Burgundy, and the $25 price tag showed it. I think I preferred the first. 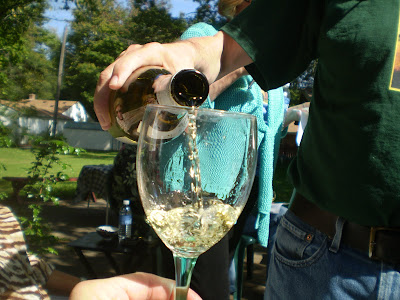 I learned that Georges Dubuoef is a negociant (spelling?) -- one who buys grapes and has it made into wine, rather than growing them.

Our third wine was a Domaine Vigneau-Chevreau Vouvray, 2005. 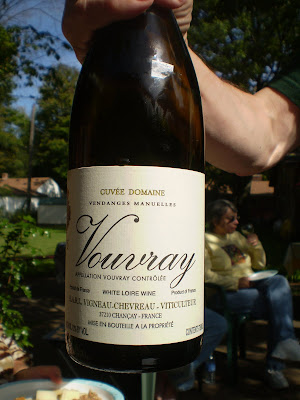 It was very dry, using Chenin Blanc grapes and coming from the Loire Valley in France. The light yellow/straw color was lovely, and simply filled the mouth with a delicious flavor.

The verdict was mixed on this one. Pat said is smelled awful, like detergent, while Roger caught a whiff of damp mold. I got nothing from the fragrance, but then, I have trouble with smelling these days. Clayton determined it got better as it sat and breathed and I think I agreed with him on that. Many of us took notes! 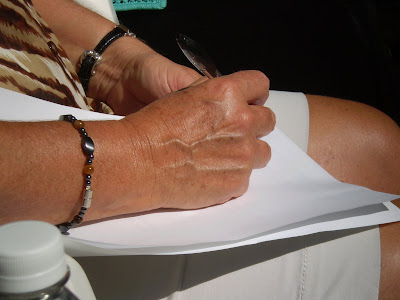 It was on to the rose selections. The first was Perrin Reserve Rose 2007 from the Cotes Du Rhone region. 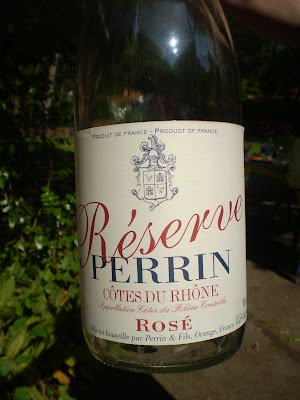 It was the most gorgeous shade of red with a hint of orange. It had a nice full color and all I could think was that I wanted a sweater this color! It was very good -- I said "yum!" And at $10 a bottle, a pretty good deal! 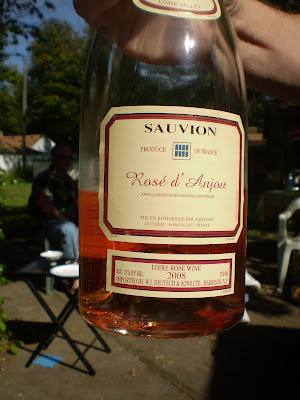 This was a pale rose, a little lighter than the Perrin. Barb said it was "the color of Rick's bricks," meaning those on his house! 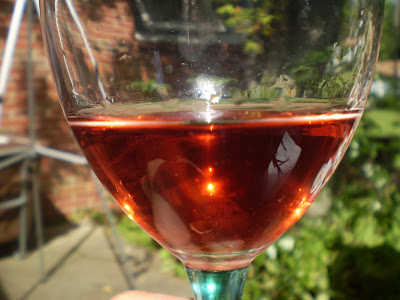 This company has been making wine since the sixth century and is now famous for rose, recommended for white meat, including poultry.

I could sum up the feeling about this wine first with Barb's "Woo Hoo!" and -- after hearing the $14.50 price, a general concensus that it wasn't that much better than the $10 Perrin! 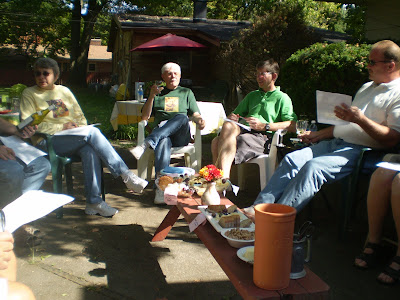 Now we were on to the reds and the Domaine Du Vieux Chene, from Cotes Du Rhone Villages 2007. 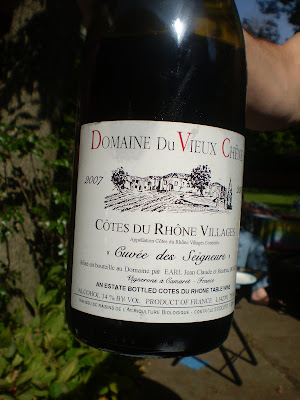 Made in the southern France village of Cuvee des Seigneure, this was our only organic wine. All the grapes were from Seigneure, and they are fermented eight days in steel, macerated. and finally aged in cement for 15 months.

Now, this one was a deep red, very dry, with less residual sweetness -- all the sugar had turned to alcohol. 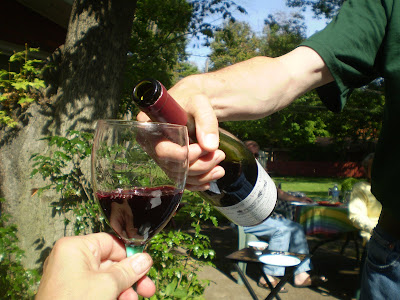 There were lots of tanins. Barb thought it was so wonderful she said, "This makes me sweat!" It is recommended for cheeses, coq au vin, and rabbit. And at $13, not a bad price.

And by that time, we were all enjoying the beauty of our wine. As I gazed into my glass, I saw the reflection of a lovely day -- and who could argue with that? 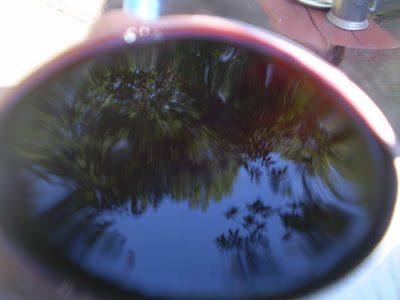 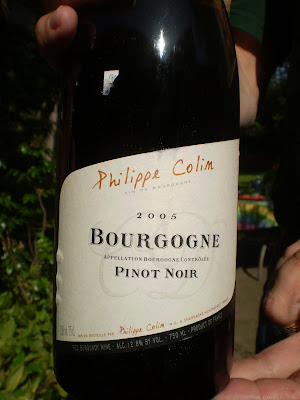 This was a brown red -- very deep. Barb said it smelled like old, wet, intriguing paper. IT was quite dry, with strawberry, cherry and many other flavors, which Dick, our expert, cheerfully acknowledged he couldn't really taste! Thank goodness.

This wasn't my favorite, and I think at $20.50/bottle, that's probably a good thing.

I learned today that all grapes have sulfites, but listing them on labels is an American requirement -- you might not see that elsewhere. 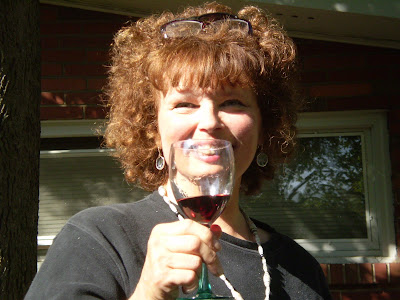 Once again, there wasn't a bad one in the bunch, even though there were some that we particularly enjoyed more than others.

Somewhere along the way, Mike said, "Look at this!" It was a great photo op! 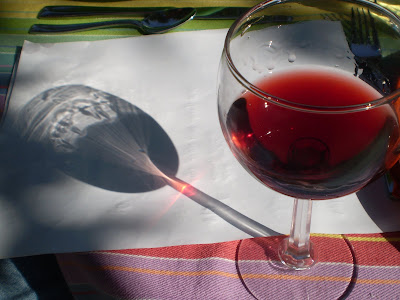 And wasn't it? Look at the reflection -- you can see the "legs" of the wine on the sides of the reflected glass! Thanks, Mike!

After the tasting we enjoyed a variation of a French recipe, Chicken with 40 Cloves of Garlic. This recipe doesn't look all that tough done traditionally -- inserting garlic under the skin of a chicken, then adding in vegetables in the roasting pan. But since it was nearing the end of grilling season and an absolutely glorious day, I modified it by slipping the cloves under the skin of individual pieces -- along with an herb mix of rosemary, thyme and sage -- and grilling them. It did not disappoint. Especially with Rick and Clayton at the grill. 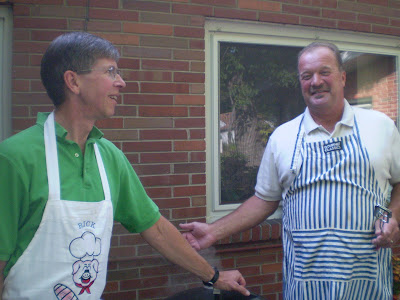 Everyone contributes to our gatherings -- today we had a wonderful salad (Barb makes the best dressing, too!) a cornbread to die for along with eggplant from Anne, and a delicious chocolate dessert from Meredith. 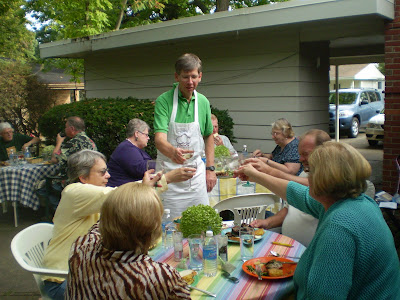 And of course, there must be party favors -- in this case, little bundles of herbs. 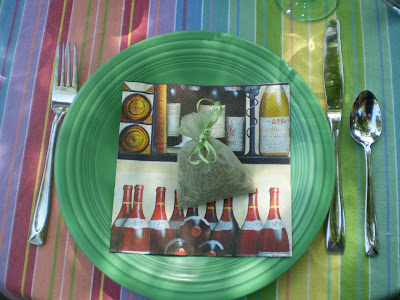 And of course everyone had a glorious time! Especially Anne, the birthday girl! 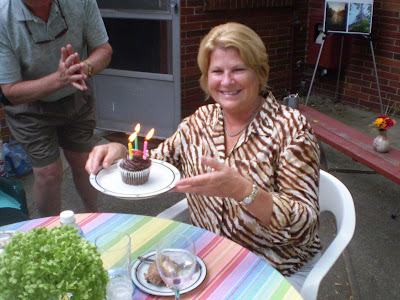 (If you are new to Marmelade Gypsy and enjoy wine, click on the "wine" theme word on the subject log on this blog. You'll see notes from some of our earlier tastings.
Posted by Jeanie at 12:05 PM

Oh how I wish I had been there. What fun. something else to add to the list of things to do when I'm in your neck of the woods.

Now THAT is right up my vineyard! What fun!

You and Rick are certainly quite the hosts (and hostess). I wish I lived by you so I could beg an invitation to one of your famous soirees! They look divine!

Hey..I LOVE the Fiestaware on the table. I've become a collector of it...the more colors the merrier...right?

When you started taking pictures of the inside of your wine glass...is that when your pals said "Uh oh..she's had enough!"? Looks like a great time by all.....I'm not a wine fan, in fact, I can't stand it, but I'm told that our BC OKanagan wines and ice wines are comparable to France's. Have you ever tried them?

Fantastic synopsis. The photos of the wines are so beautiful, that one with the napkin and reflection just pops!

The chicken sounds DELISH. Isn't it great to have friends to share this hobby with? A splendid way to enjoy one of our last balmy evenings of the season.

It looks like a wonderful time. You make me wish I liked wine.

I heard a wine commercial yesterday and I thought "I wonder when Jeanie will post another wine tasting?" so you were right on time. I do love when you post about your tastings,,they are so informative and helpful! Beautiful day too!
xoxoxooxox

I love the table settings, to begin with! and all your pictures along the way. Such wonderful details in the photos, as well as capturing all the fun and lovely friends.
(and I'm partial to Cotes du Rhones wines!)

It's official ... I'm thirsty!
What a fantastic gathering, a wine group = that is brilliant Jeanie!
I am totally impressed that you were happily tasting AND documenting the entire event! Cute pics of you!
Well Done!
Super photos, I must go back for another lookie look!

What a great day and the chicken sounds fab.

I don't know a darn thing about wine, but enjoyed every word of this post. The photos were so fun. Nice to have such good friends.

Yeah, I think if I lived close I would crash your parties. Looks like a fun time was had by all!

I came visiting your blog as part of the challenge from Beverly at How Sweet the Sound. Visit a blog you never visited before. Well, the name grabbed me first. The Marmelade Gypsy....then I find your post about wine tasting. Interesting because I live in the Wine Country in California. Lots of vineyards around me here. You kind of lost me with all the French words. I have lost what I learned in my one year of french in high school. Too long ago. But I did not know there was a term for a person who buys grapes to make wine. My brother does that with his father-in-law. They have their own wine. No plans to buy grapes this year though. Enjoyed browsing through some of your other posts too! I have only been to Michigan once, and that was way back in 1976. We were basically just driving through from south to north east and then came back into the states through Niagra Falls. I was in college then.

These wine reviews always send me off on lovely journeys. Such lovely wines. Wonderful friends, too. Hope you are enjoying a bit of both this weekend!

It sounds like it was a lovely celebration! What incredible fun.