"What makes a good antique show," Rick asked, after I trotted home from downtown Gaylord more than an hour after I said I'd be back.

The reason? In addition to my list of items to pick up from the farm market, Lowe's and the grocery store, I discovered an antique show in town! (There's a photo of what I bought here -- can you guess before I tell you?!) 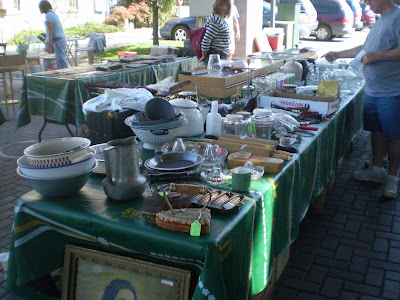 "It was a good antique show," I'd said, which prompted his question and my thought. 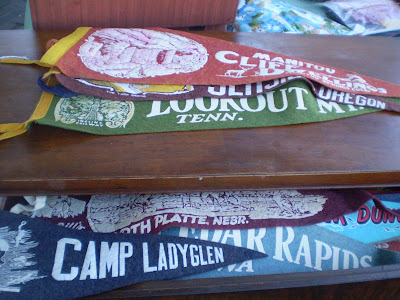 I suspect my evaluation had something to do with the fact that I'd been to a lot of lousy garage sales in recent weeks, with few purchases to show for the time spent. Yet, this show had something to it. 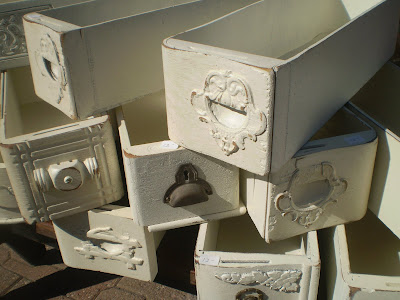 So, here's my criteria for a good antique show. 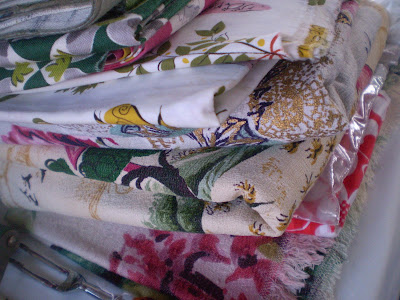 It's big enough to have some diversity, but not so big that I can't handle it. Small enough that I can remember what I saw a few booths back, and more importantly can find the booths. And
there's enough space to move about in -- especially if you have already bought something. 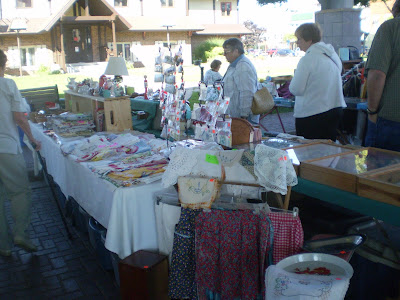 It has things I like. And a really good one has lots of things I like! Things I would buy if I had the money or the space to put them somewhere. 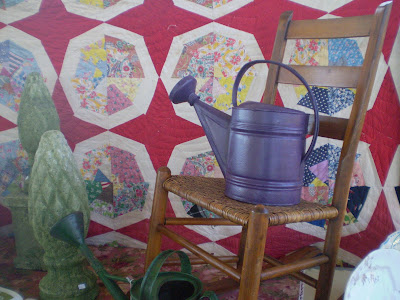 It has tidy tables with things carefully placed with some sense of flow. I can see things better that way, instead of glazing over. 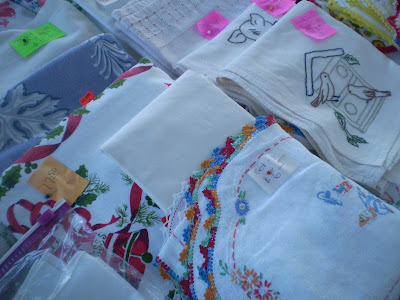 The items have some quality to them. Even if they aren't my style, I can look at it and say, "Someone would like that!" (I'm just not into helmets...) 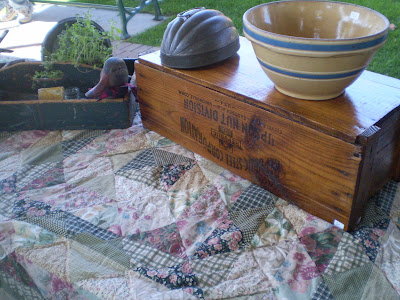 The displays are fun and use the merchandise well. 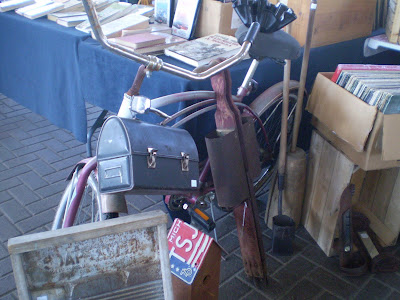 The displays incorporate flowers or nature. 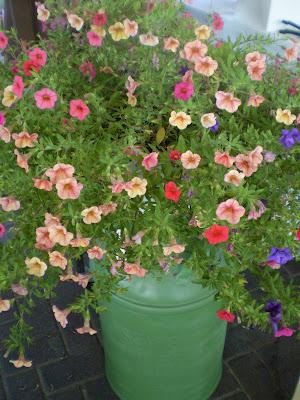 There is lots of color. 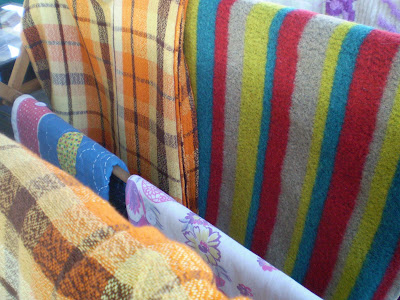 Displays can implement a simple elegance. 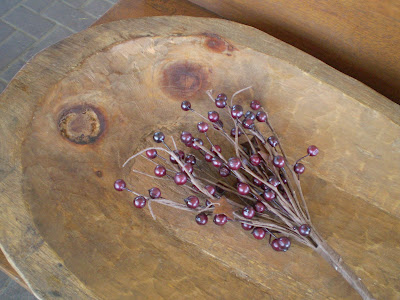 There's a good mix -- more formal with the more casual. (But I'm more of a rustic person myself!) 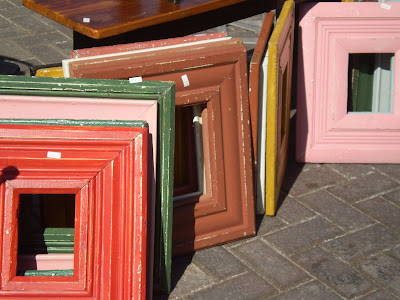 It has cool cooking stuff. 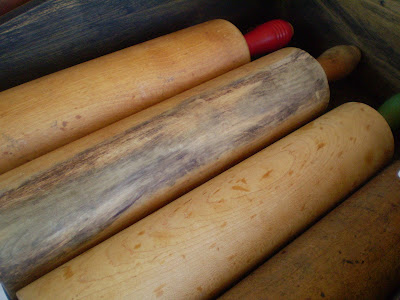 Some of the booths have a sense of whimsy. (For some reason I find this clown kind of scary-sick like the Stephen King clown and kind of fun!) 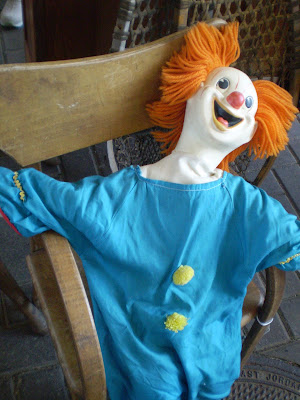 There's a sense of season. At this time of year, I'm looking for Halloween, harvest, Christmas, not valentines. 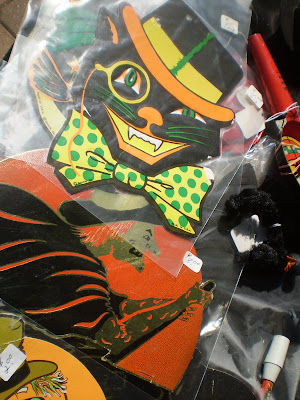 And, I end up buying something! In this case, the top white box (a sewing machine drawer, I'm told), with carving and on the side you can't see, a great drawer pull. It's just the right size to hold my Goldens! 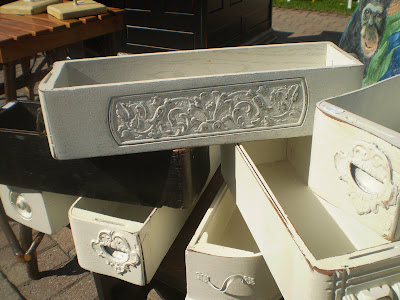 What's your idea of a good antique show? (Or is no antique show your cup of tea?!) And which of the things I showed would you take home with you?!
Posted by Jeanie at 10:28 AM

Fabulous, Jeanie. I as swooning over the frames.

I love how you notice and capture so many beautiful moments in these markets. Me, I think I must be visually challenged: I feel overwhelmed within minutes, ready for refreshment and a quiet place to read.

I think you hit just about everything...

although, I do like clean bathrooms and great food wherever I go....

or at least bottled water on a warm antiquing day....

I like that bowl on the wooden box. I love these kinds of shows.

Before I got to the end of your post, I was wondering about the white boxes and chose them to be the item you bought. I was right? Sewing machines drawers, interesting. The creepy clown reminds me of the Chucky movies.

I have had to quit going. I need nothing and am actually trying to get in the downsizing mode. So, I have to put my blinders on. I don't think there is much of a bad show unless the vendors are all over priced--seen my share of those, let me tell you. K, with that said, I spy old sewing drawers (good for sorting bits), some old barkcloth (I have an old quilt that needs mending), an old bicycle (I've always wanted one in the yard with a pretty basket of flowers on the front), and some old woolens. Ooooh. See why I have to put my blinders on? ha. xoxo

Oh, now you are talking my kind of afternoon.

The perfect show has lots and lots of pottery and glass. Or, glass and pottery. I'm not fussy. My dirty little secret is that I've been an antique china collector for years, even when I couldn't afford it. Back in the early days of ebay, there were goodies there, and I did a lot of buying. Then, as I began learning more and more about what I was collecting, I began roaming shows, looking.

I've done some selling, too, and it's always fun to find something you know you can turn around for a quick profit. I've had two particularly nice finds - one, a Wheeling LaBelle flow blue pin tray I picked up for $45 and sold on ebay for $345. The other was spectacular - a covered sauce in Homer Laughlin's Wells art glazes line that I picked up for less than a ten-pound bag of catfood and sold for - well, a whole lot.

But the buying and selling isn't my thing - it's the collecting. I could go on forever, but won't. I just love it.

I've never thought of it, but the story of how I got into it is quite interesting, and began only when I got my computer. Maybe I'll write about that!

So many interesting things. I just love antiques and hunting through the various things for that unnoticed little treasure.

Lovely! My criteria is similar to yours. I especially like to find something to purchase at a steal so that the trip wasn't for naught.
Karla

Oh, I love antiques! And I have a store that I go to where I live that has rooms and rooms full of them. People rent booths and place them in that building. I can spend hours in there. I even love the smell of antiques.
Great post, love all the colors!
xoxoxooxox

I would buy the pink wooden frame, a rolling pin or two, and tha washboard. (I kind of feel like this is one of those "I Spy" kids books, where you have to find certain items). I agree with you about the clown though....not one I'd want in a child's (or my) bedroom. What is it about some clowns that are so scary??

fun photos, good criteria. I would have bought 2 of the drawers; I love them.

There's just no way around it - Bozo the Clown has always been creepy.

I would have lost a decent chunk o' change shopping there!

I think YOUR antique show sounds like my idea of good show. I like nice weather, not too hot not too cold. I also enjoy some junk boxes to root through ... the odd bits that no one usually wants can be mixed media treasures!!!
Wonderful visuals Jeanie!
Wonder how many little ones that clown scared :0)

Oh that looks like a fabulous antique show. I agree with your points, even though I didn't know it until I read them. Love what you bought.

Me? I swooned over the vintage fabrics. Wow. Did I tell you we bought out daughter oodles of that in Paris at the Flea Market? Thought I'd died and gone to heaven. If the daughter had been with us, I'm afraid Don never would have pried us away before closing time.

I would say that this was an AWESOME antiques sale! I like paper stuff-- postcards especially, old photos. Unusual containers (your sewing machine drawer is lovely!) Orphan chairs (my dining room table is surrounded by unmatched chairs). Things that say, "buy me"- and often there is no rhyme or reason to that event.