It Could Have Been Worse

Ever discover something -- see something you wish you hadn't -- and think "This is going to be really bad."

And it sort of is. But it could have been worse!

Well, that happened to me today, but not only could it have been worse, but I had the real pleasure of spending some time with the Don, the Bug Man. 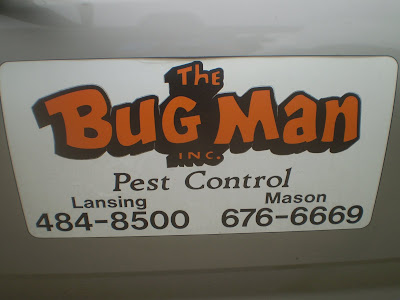 I've seen some big black ants in the kitchen for a month or so, and get very good at smashing them with my fist and tossing them down the drain. Annoying, but hey, I live in Michigan. We get bugs.

But when I went down to do laundry a few nights ago, I noticed a rather large pile of wood dust coming from the ceiling beams near the washer. (We won't even go into the fact that this no doubt didn't pop up since the last time I washed clothes...)

So, I called Bug Man.

Now, I had called Bug Man here in Lansing back a couple years ago, when I was experiencing "The Invasion of the Kitchen Moths." Don came out then, and while there were drastic measures they could do to take care of this, and he'd certainly do them if I liked, he basically said the cure was almost worse than the disease, and suggested a more natural remedy to help. No charge for the service call, which is pretty darned unbelievable.

So, when I saw that pile of sawdust, I called them back, because any business this honest deserves my patronage.

Not only did they get me in quickly, but they sent Don again, and he was just the best! 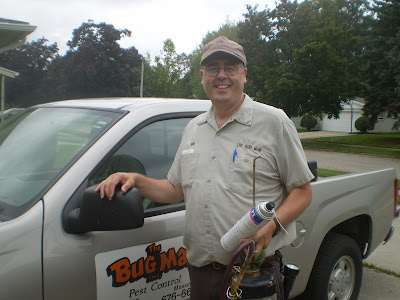 As we toured the house, he pointed out things that would be useful to take care of -- getting wood out of the crawl space (who knew it was even there?); getting a dehumidifyer -- 30-50 gallons; cut the tree limbs touching the roof because ants can get in that way -- that kind of thing.

And he instantly found the problem -- carpenter ants in one spot. And while he was looking, he checked for termites (None found! A-OK! Hooray!).

Now, this is all the technical stuff. But it wasn't why I really was glad Don came to take care of the job.

It's because this is a man who genuinely enjoys his work. 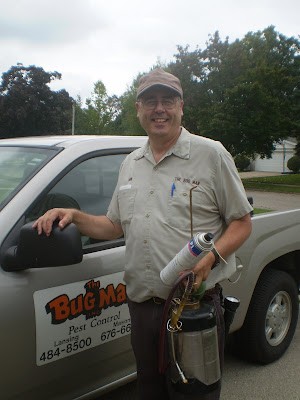 You could see it on his face, as he got so excited when talking about the jobs he loves and hates ("I don't really want to do another flea job," he said, after saying this was flea season. "They're boring.")

His favorite? Yellow jackets! "I love getting the yellow jackets! The danger! The risk!" (And he's had a few stings to go with it, but it doesn't stop him from loving it.)

"It's like being a sleuth," he explained. "You're poking around to find them. And sometimes you don't, but when you do...!" And he smiled that great smile.

On his website, he has a photo of him by his "pest cemetery." He loves his work so much, he almost makes me want to do it. Almost.

Oh -- and about the ants? Well, took me back downstairs after he sprayed, and sure enough -- in the hole where the ants were hanging out, they were pouring out! All over that beam. And within minutes, they dropped to the floor, deader than door nails! There may be a stray for a day or two, but this stuff works! 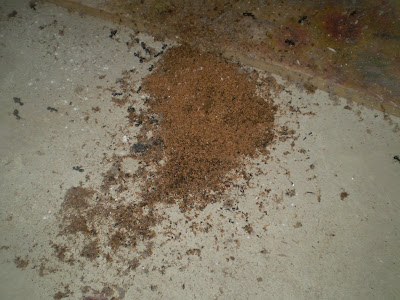 And so (and now, Cathy and others bug-squeamish, you can click away if you like), I present to you -- dead ants by the pile. (This may be my most embarrassing blog moment.) But they're so glad I just had to share. 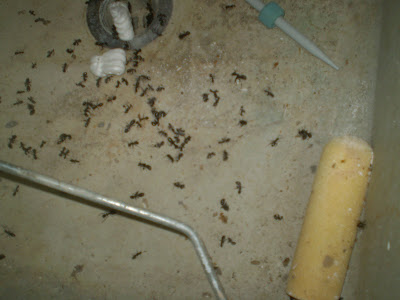 Oh, yes -- and how much did all this cost me? $125. Dollars well spent. I needed this far more than more paints or yarn!

Thanks, Don! You guys are the best!

EW!!! This is what we dealt with last year, remember??? They crawled in where some termites had apparently been years ago (before we moved in). They had eaten away so much around the garage, we had to have the trim replaced. EWWWWW! Nasty little buggers!

Oh yuck. Stomach churning. Ours never get that big but we have had more than a few invasions of the tiny variety. Remind me to visit Michigan, not move there.

I want this bug man in Australia!!! The last one I had gave me a lecture on buying an old house.

Thank you for sharing! And if you see him down the street tell him to send some positivity to my Aussie bug dude.

You think he makes trips to Ann Arbor? He sounds wonderful! I have an appliance repair group like that - Harrison's Appliance repair. They're in Belleville, but you never know where they might be willing to drive to!

this is why my bug man comes every month to pay me a visit...
to make sure that critters and insects that I haven't invited, don't wander in and decide that my house feels like home....

We always do baking powder on their routes...that also helps to kill them. But sometimes they are too numerous for it.
Do you know, that ants are the real bosses on the world??
I suppose that one day if they are no human beings on the world, you will find ants!!

I'm glad there is a man so happy to be doing his bug sleuthing. I couldn't do it.

ackkk, Love nature OUTSIDE not in,
Don the bug man sounds fearless and fun too! glad you got the situation under control ... sigh!!!

Thank Heavens for people who like to kill bugs for other people.

This post makes me squirm! Glad it worked out for you.

eeeuuuwwwie! We have red ant problems, my husband has to keep on top of it by burning their nests. Thankfully they don't get into the house much!

This just tickles me pink! I'm Sherry, we talked on the phone when you called earlier...I just wanted to say that this is so very nice, I love seeing what the guys do on the job (I've never really seen them at work, except at my own house). You have a great way with words, love your blog :).

Only you can make interesting reading out of ant extermination! I've been having my own bug problem here - fleas, even though I put that flea preventative stuff on my pets every month. The vet says it's because of all the rain we've had.

i have spent quite a bit of time reading the last several of your posts and why i stopped here in order to comment i cannot tell you. i am more squeamish now than i ever used to be.. but i'm also more sentimental and spend a great deal of time in my mind thinking about the past. So all that said i wanted to turn my head but forced myself to look at your ants. i cried reading your birthday post for kevin. you are one of the most loving women i know. gosh you are so, so full of heart! i am terribly impressed by your spider web photos and your light- through-the-trees-god- is-talking-to-you photo!!?? breathtaking jeanie!

thanks for linking me up with your great friends. i had some very nice visitors :)

you know love you jeanie :)