Apart from the Cotswolds there was one attraction in Bath I had longed to see. It had received wonderful 'reviews' from many a friend and was filled with history. It was the Roman baths. 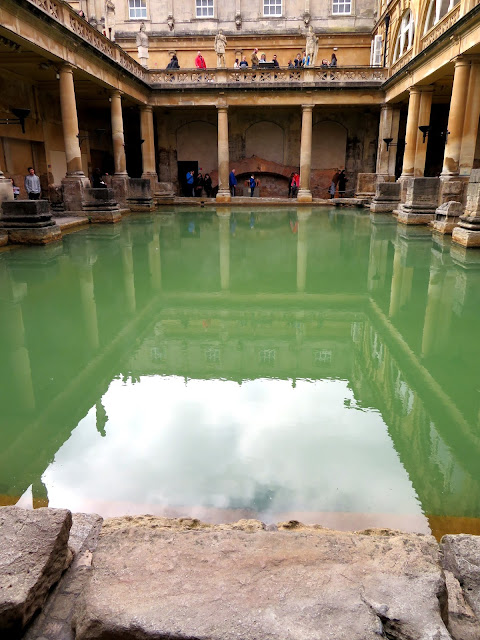 We took the bus into Bath and walked about six blocks to the square that included the famous Bath Abbey and the baths themselves. 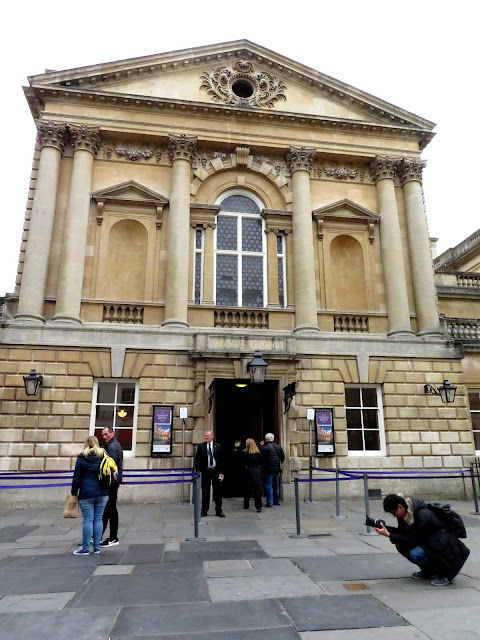 Bath was a Roman fortification and the baths were a place of relaxation and socialization for the soldiers and others of the outpost. After purchasing our ticket, we opened up onto this terrace overlooking the waters. 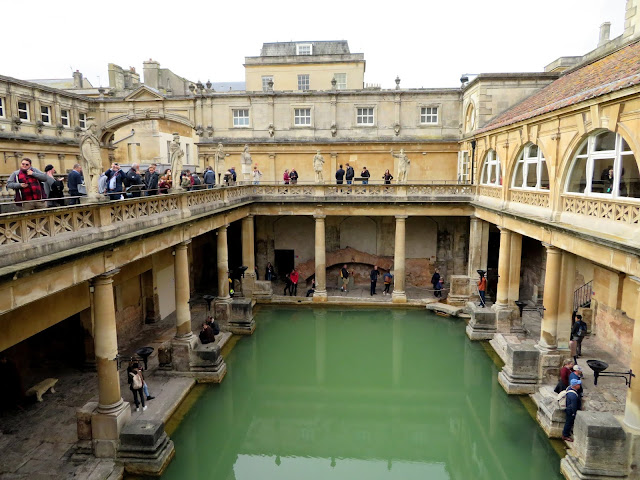 The wide bank of windows allows all standing within the building to have an excellent view. 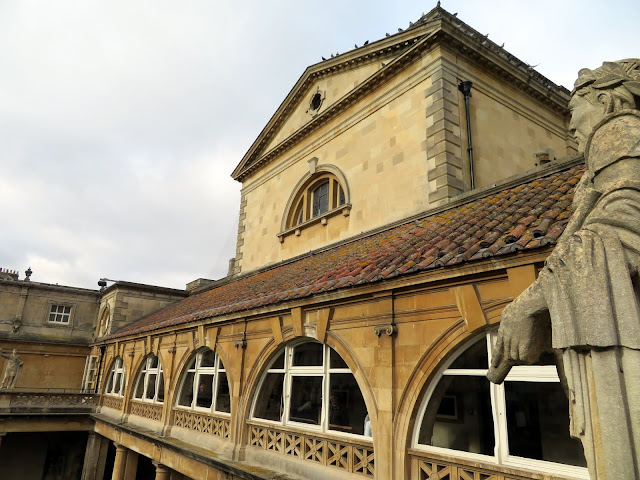 There are numerous statues surround the balcony which covers three sides of the building. The fourth, on the right above, is part of the museum. 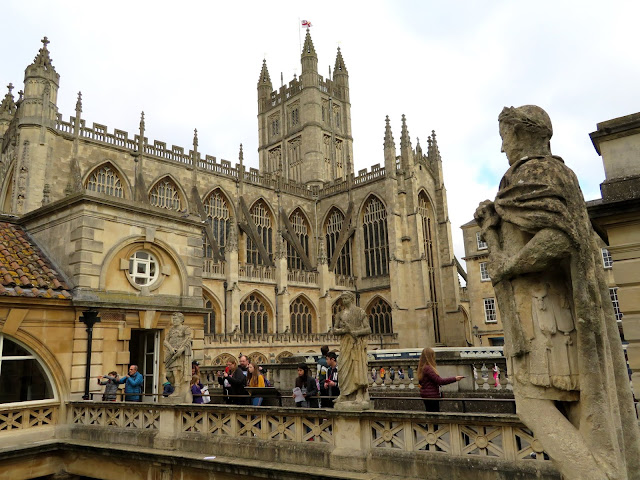 The statues, we learned were reproductions but they were excellent ones, showing a good deal of age, yet well maintained. 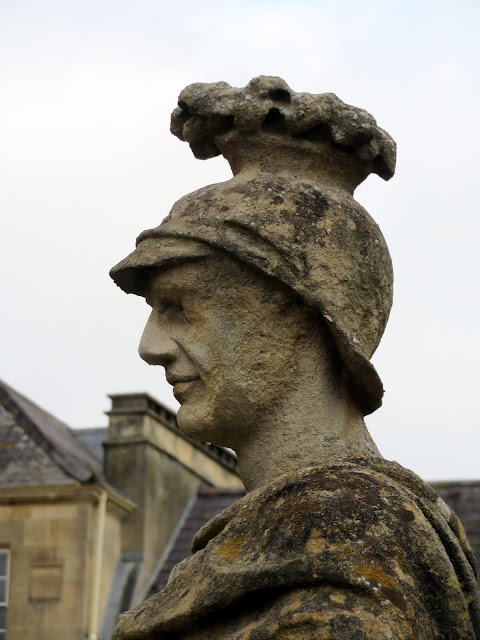 The tour is a long one with excellent audio and interesting mini-films along the way that show how the various artifacts on display may have been used during the period. 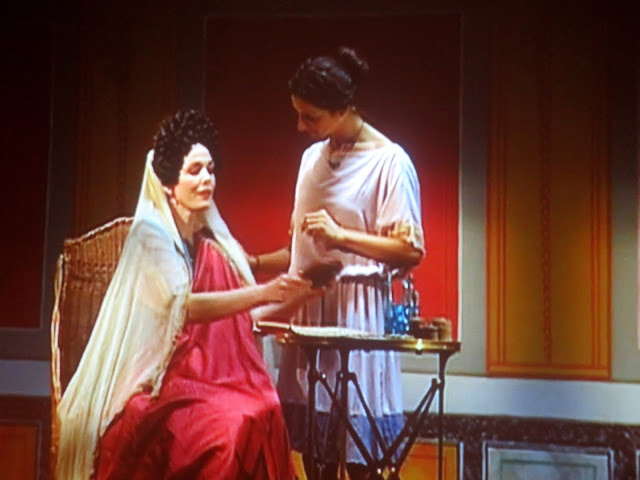 I'd allow three hours. And it is handicap accessible for the most part. 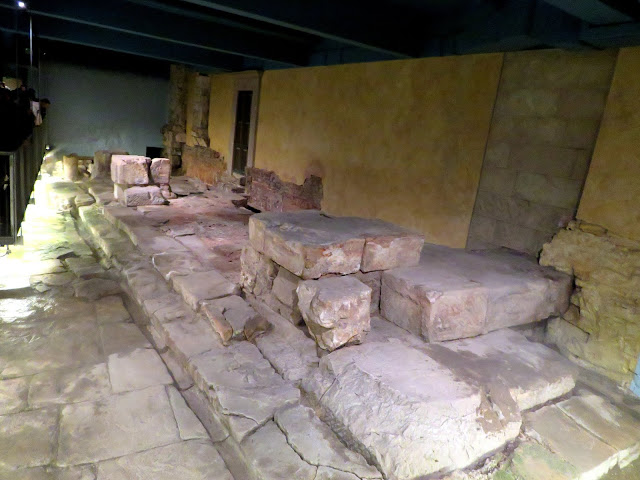 There were some terrific audio visual effects too. This wall is what is original. 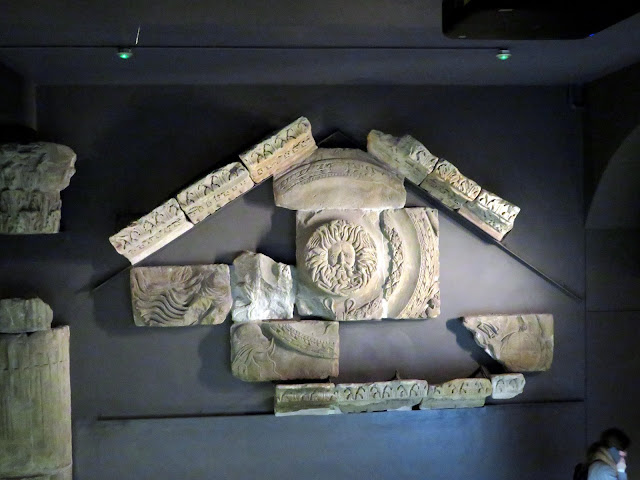 It morphed into this, showing reconstruction based on archaeological findings. 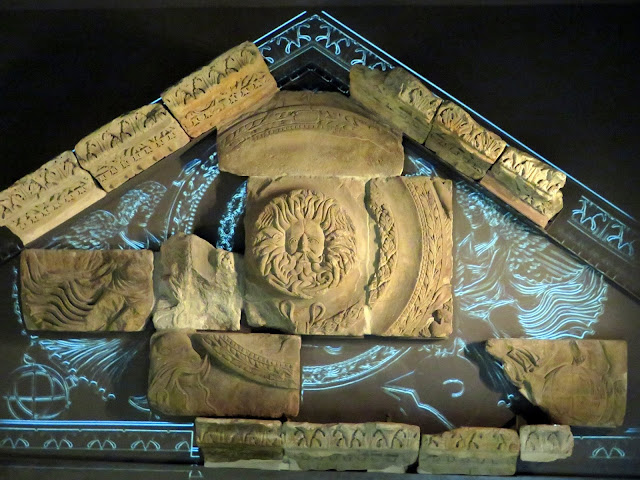 Then this, showing what the original colors would have been. 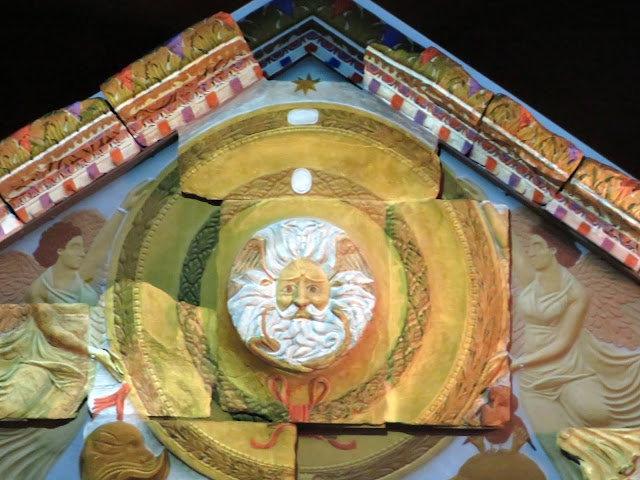 There were numerous scale models... 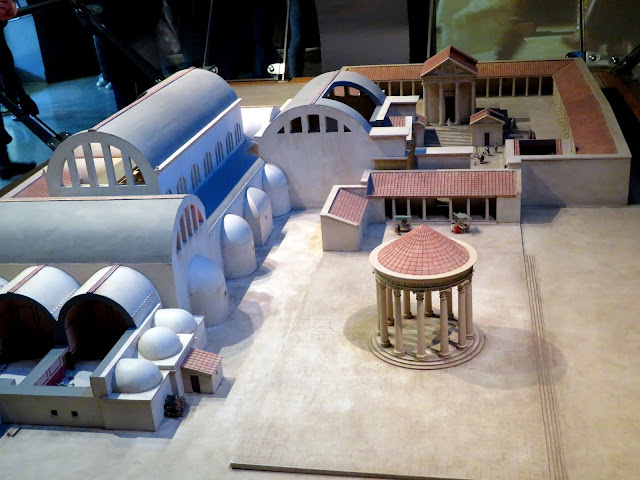 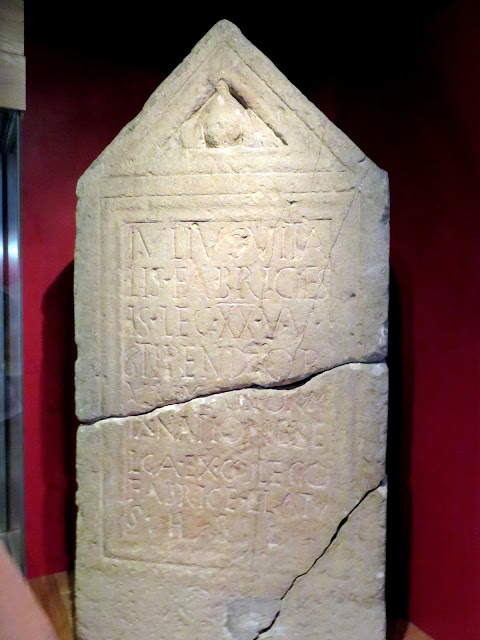 The waters for the baths runs through the building on the lower level... 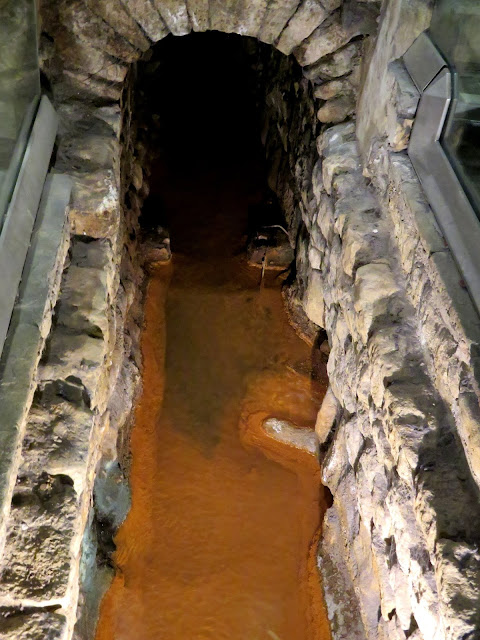 ...and out into the bath itself. 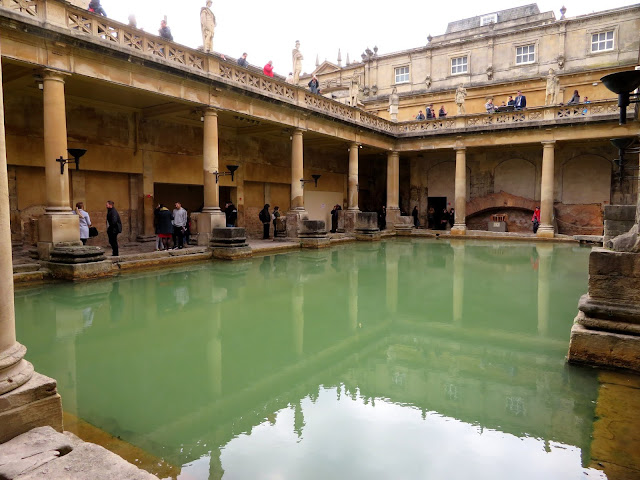 From there we are actually on the terrace and couldn't resist a photo op. 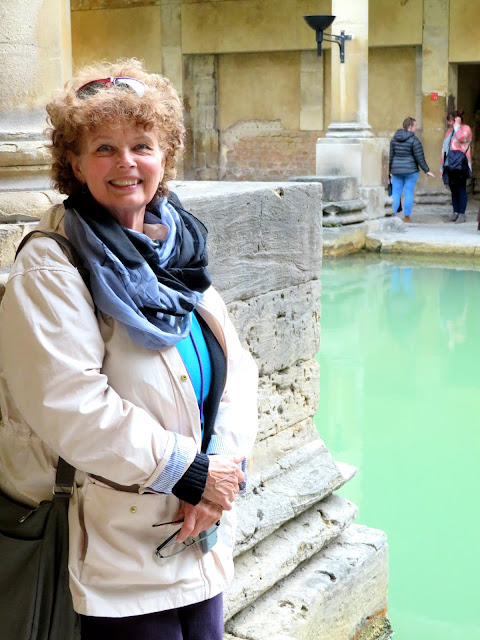 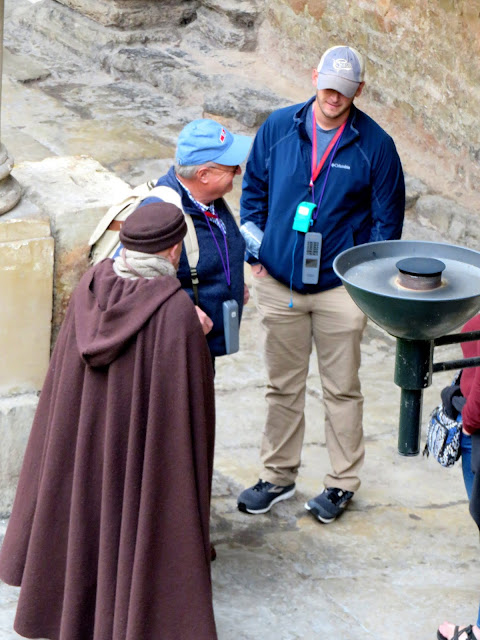 His ensemble was well made -- and on a chilly day, probably most welcome! 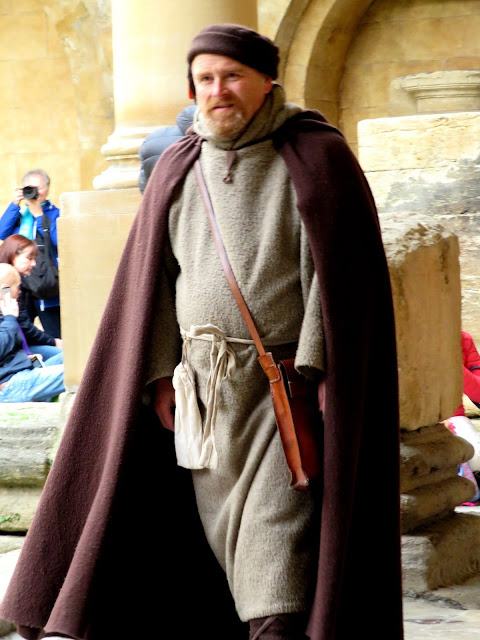 At the far ends of the terrace level were inset shelves with pottery rescued from the ruins. 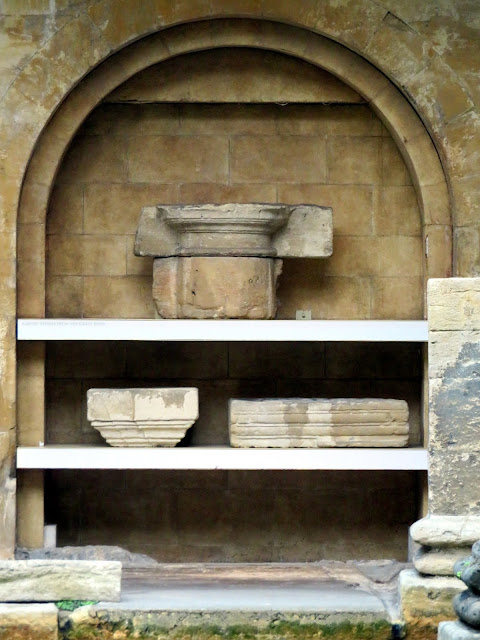 And, from here one could enter the male and female baths. The one we saw was loaded with coins! 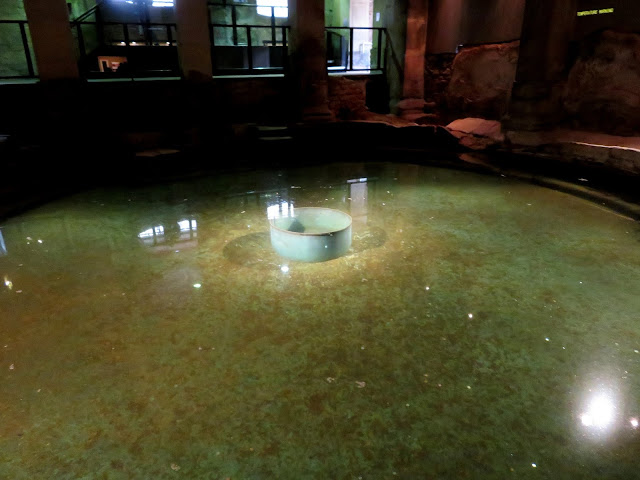 Archaeology continues to be in progress here, as in this space. 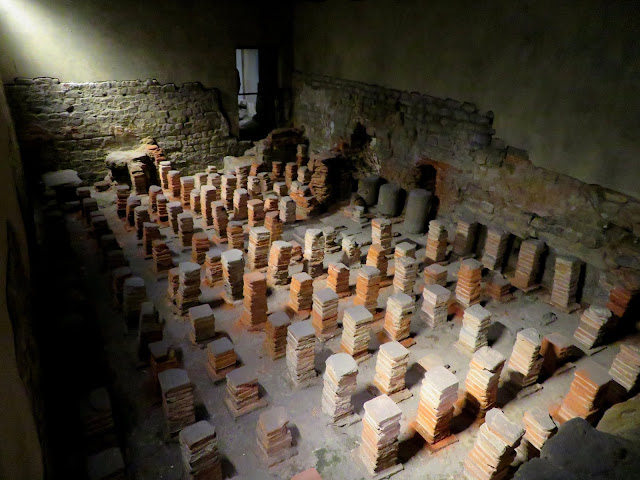 As a "fabulous parting gift" we were all given a taste of the mineral water from the baths. It wasn't bad (it would have been better chilled) but seemed salty and you could definitely taste the minerals. 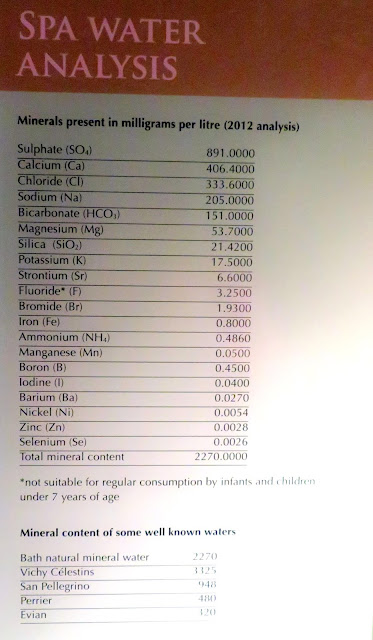 The admission price for this one is hefty but it was worth every cent. I learned plenty and found it all fascinating. 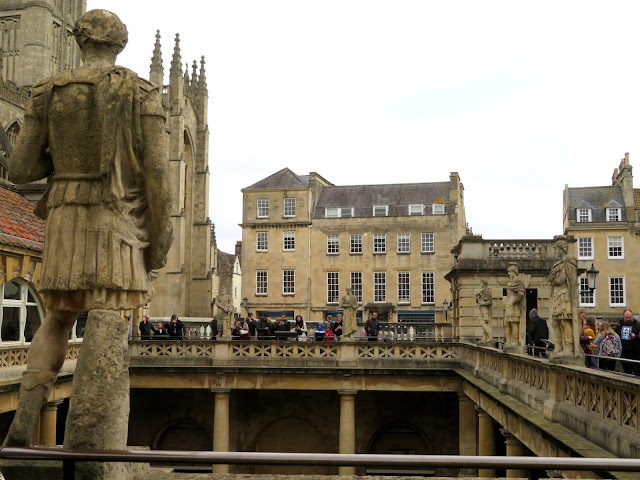 (The downsides -- a lot of people means sometimes it's hard to see some of the things clearly. Be patient!)

Roman baths are everywhere! They built them to last, so one sees them at almost any archaeology park throughout the Roman Empire. I've seen them in a lot of places including Israel, Italy, Spain, Turkey, and France. This one seems especially well preserved or maybe reconstructed. Those funny brick structures are the "hypocaust" that allowed hot air to circulate under the floor of a room (the floors are almost always missing, as in your photo). You probably learned that from your guide.

Wow, I have often tried to imagine what these baths were like centuries ago when they were used...yikes, I am grateful for private bathrooms now! As I said the other day, you and Rick experienced and saw so many diverse things on your trip, thank you for sharing with us!
Jenna

Aren't the Roman Baths amazing? I went on a guided tour and it was so interesting. I did enjoy my visit... the water not so much though. It's quite amazing to think that people still enjoy the same things for a day out today (a SPA day) like they did 2,000 years ago.

Wow, what an awesome tour, Jeanie, and so many interesting things to see. That was cool that they showed the mini films along the way. It enabled you get familiar with this period and how they lived. What a grand building this is.

Thanks for a tour! We probably won't ever go...but thank you!!
Nancy
wildoakdesigns.blogspot.com

What an amazing site to visit! I can envision the ancient Romans enjoying their baths. The stone work is gorgeous. How fun that you got to taste the water!

Bath is a wonderful place. I always expected to meet Jane Austen there! Hugs, Valerie

The photos are awesome...as usual!!! Still here wishing for days of travel. I keep hoping...one day:) A good friend is leaving soon for a cruise to see the tulips in Holland. Bet that will be wonderful. I keep trying to decide the one place I would really like to go since I will probably only get one dream trip in this lifetime, if that!!! For now I'll just live vicariously through your pictures.

Jeanie, this is fascinating and I know it was interesting. I haven’t visited Bath, but reading your commentary and seeing your photos I definitely will put on my list! Thanks for sharing all of your wonderful travel. I appreciate and know how much time is consumed in editing all of your photos and journaling everything in order to remember. You do an excellent job!

My gosh, that was fascinating! Makes you wonder who/how the place was built. I'm guessing slave labor?

Ditto to what Pam Richardson said above.

I've been there (many years ago) , and both the city of Bath and the Roman baths left a lasting impression on me. Your fabulous photos bring back a lot of pleasant memmories for me, from that place. Thanks.

You certainly got to see a chunk of history.

A fascinating place. I'd love to see it myself.

Interesting and fascinating . . .
And the history . ..

Nice to be able to see the historical baths. The building is beautiful Jeanie, thanks for the tour.

So happy you went there and yes there is alot to see. I thoroughly enjoyed our visit here.

Wow, this looks so beautiful! Don´t you just want to jump right in? (On a hot summer day).
A wonderful exhibition, carefully done and oh, yes, I remember some water we got from a well in a national park. It was yellow-ish but tasty!
What is money when you get so much fun for it!

A friend of mine is going to England this summer and her significant other really wants to go see the baths in Bath. We were just talking about this on Monday. Cool photos. I will mention your post to her in cas she wants a preview. Thanks for sharing. Hugs-Erika

Hello what a great tour of this historical place. It is beautiful. Enjoy your day!

I didn't take the tour when I was in Bath, but I guess I should have. It looks very interesting!

My single favorite photo is of the pottery pieces in the niche in the wall. My "Hmmm..." moment? Tasting the water. Such a wonderful place to visit!

Sounds like it was an awesome tour. You sure packed a lot in to your trip.

So cool! I love how they show what the original coloring would have looked like. I'm always amazed at the grandness of these structures and wonder how they did it without the technological advance and automated manpower we have these days!!

This is so interesting, comparing to some we've seen in Italy. This is definitely a must see on our next trip to UK. Thanks for the info and pics. This was a great tour......

Bath... what a gem of a city! This brought back sooo many great memories when we visited there years ago. It is a splendid place--how well antiquity and modernity live side by side! The Roman Baths are incredible. It's amazing to think of how colorful it was originally! And it is amazing to think of the scope of the Roman Empire and how far it and wide it was. LOVED seeing this part of your trip, Jeanie... At least you had a spa day on your travels... haha... :) You could have needed a real one after, what with your foot and all... ((HUGS))

Jeanie, this is so interesting. What a fabulous trip you had. It is amazing how it was all built so very long ago and the primitive tools they must have had to work with. I stand in awe of such skills and beauty. Again, it is wonderful traveling with you.

Jeanie, thank you for sharing these interesting facts. England is so full of history and you really esperienced most of it. What a great trip..Happy Wedneseday..xxoJudy

Jeanie, thank you for all the photos of the Roman Baths. I always am amazed at Roman engineering. It's fun traveling along with you on your adventures. Bath is a beautiful place with so much history.

The original colors were beautiful!

Thanks for another interesting mini-tour. I never even knew that there were such baths in England and so I am wiser now thanks to you, Jeanie.

I remember enjoying the tour immensely but it was good to see your pictures and hear some of the facts. I don't remember seeing the pediment with the colored replica of how it would have been painted. That is very interesting so I learned something.
Glad we went in September. Looks like you were prepared for cold weather.

When I was in grad school, I had a friend who lived in Bath. He sent me photos of similar shots to what you shared. It's great that it hasn't changed that much. This was a fascinating post, and I learned quite a bit, too. That green would turn me off, though. Thanks for taking me on this tour today, dear. I'm glad it didn't disappoint.

Wow, it was so exciting trip! I would love to visit these Roman Baths. Next time I visit UK I'll definitely go there!

We didn't make it to Bath last fall so I really enjoyed your post.

OMG...Your photos are fabulous... and the Baths are so well preserved.. but I am thankful for my own private bathroom( ha Ha)...This was such an exciting tour... I'm putting it on my vacation list... Thank You for so generously sharing your awesome travels...Big Hugs

The architecture is amazing.
Not sure I'd want to drink the water.

So much to see and do in Bath … yes, the Roman Baths a must do!
Don't you love the way the guide is dressed, an amazing ensemble!

That looks fascinating. And that's awesome that you got to try the water.

This really looks like an incredible place to visit! Thanks for sharing at Take Me Away! Have a wonderful weekend!
Shelley